Watching Boston-based hip hop group STL GLD collaborate on a new song — under 40-foot ceilings and the gold leaf of PEM’s historic Plummer Hall — is just the kind of juxtaposition we like around here. Taking the time to absorb the heady atmosphere of this former research library, the group joked that they were getting into their roles by using the “method rapping” technique, which included an inspirational visit to Ziggy & Sons’ Donuts on Essex Street. 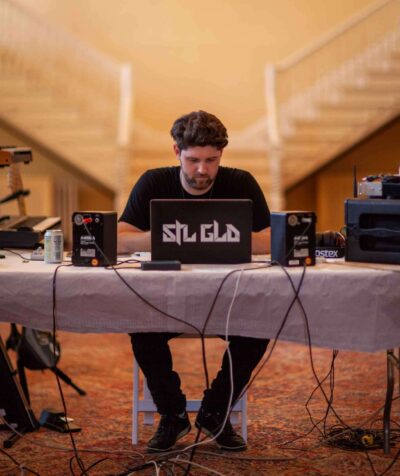 For three days, which began during a heat wave with no air conditioning, the group celebrated one of their first face-to-face collaborations since the pandemic began. Their mission: to write a new song, from the ground up, inspired by the building and using its natural reverb. The group gathered in the Great Hall of the 1856 Italianate-style building, surrounded by an elegant mezzanine. Once home to antique books, ephemera, maps and photographs, the Phillips Library collection has relocated to a building more suited for its conservation. 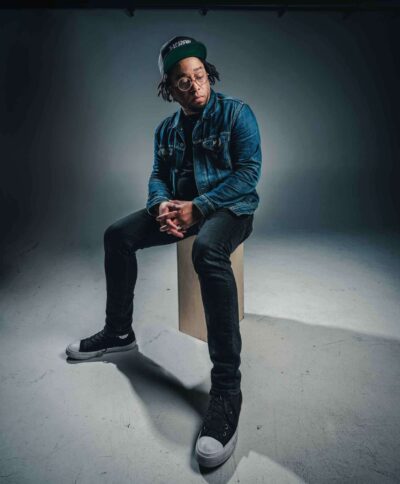 STL GLD member Moe Pope may not be new to PEM audiences, as he was recently part of a GenPEM virtual conversation series called Artists from Home, a virtual series started by Kerry Schneider and run by the Development Events Team over the course of the pandemic.

Pope shared about his music and work as a visual artist with Trevor Smith, PEM’s Curator of the Present Tense. He spoke to Smith of the importance of Boston-area arts institutions collaborating with musicians like himself. 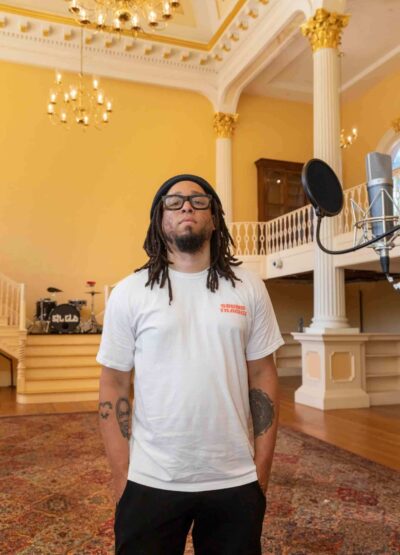 During the Plummer Hall visit, Pope said, “This is a new thing. I remember always getting calls to do something cool during Black History Month. That gets tiring after a while. People are celebrating hip hop now, whereas we couldn’t get booked in the city a couple of years ago because it’s hip hop, whether you’re white or Black, it’s the connotation. This is huge. It’s a step in the right direction.”

Known for their genre-bending compositions, STL GLD is considered multifaceted and complex. Their live shows are dynamic experiences with elements of hip hop, rock punk and cinematic orchestra all coming together for an unforgettable live experience. They were crowned winners of Live Artist of the Year at the 2018 Boston Music Awards and named Boston's Best Band by Improper Bostonian.

They are exactly the kind of group Smith is trying to book for PEM Presents, a new performance series that activates the museum’s historic structures. “The historic house collection, this incredible body of historic architecture covering 300 years of New England architecture, is one of the gems of the Peabody Essex Museum,” said Smith, who in addition to curating PEM’s contemporary collection is Associate Director of the museum’s Multisensory Experience. “It felt to me that there was an opportunity to work with performers to create unique performances in these spaces.” 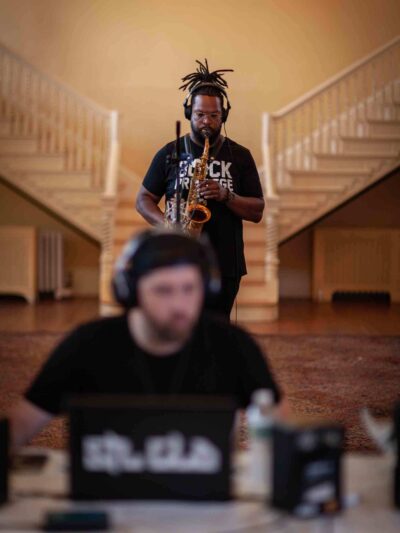 Smith hopes to book multiple kinds of performances, including poets and dancers. The series sprang from the digital concerts happening around the world during the pandemic. With capacity and climate control issues, the houses are perfect for hosting online or hybrid events. In the spring, pop/indie folk duo Damon & Naomi gave a virtual concert.

The five-member group STL GLD is made up of Moe Pope, The Arcitype, Christopher Talken, Jonathan Ulman and Tim Hall. They have worked with a number of big area museums and institutions, but Pope says there is still work to be done. “A lot of these meetings I’m having with these institutions, there are no people of color I’m talking to. Not one … so I’m hoping that changes where there are people who look like me or people who understand how I’ve grown up, the education of life, versus the education of Harvard and Princeton, because I think that’s equally important.”

With no formal plan, the members of STL GLD set up mics, drums and turntables and waited for the inspiration to come organically, as their photographer and videographer captured every moment. “Opportunities like this one are where this band shines,” said drummer Jonathan Ulman. “We can always get on stage and kill a live set and it’s great and everyone seems to enjoy it. But this is where we separate ourselves from other groups. We go into places like this with no idea of how it’s going to be. And I can pretty much guarantee that what we come up with, even when we don’t know what it’s going to be, it’s going to be dope.”

Go HERE to learn more about the virtual performance on Wednesday, July 21, at 6 pm to see the documentary of STL GLD’s songwriting experience at Plummer Hall. To watch the conversation between Trevor Smith and Moe Pope, go HERE.

Join us to view a documentary style film about creating a STL GLD song in Plummer Hall. The artists will talk about the process and how the space influenced their sound. The video will culminate in a performance of the final song that they created over three days of writing and recording in PEM’s historic house. This event is presented by GenPEM and the Present Tense Initiative.

Watch the video below from PEM Presents: Damon & Naomi: 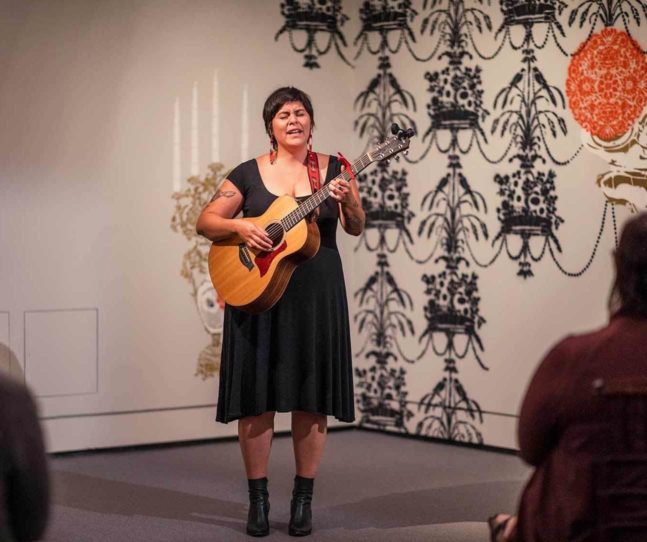 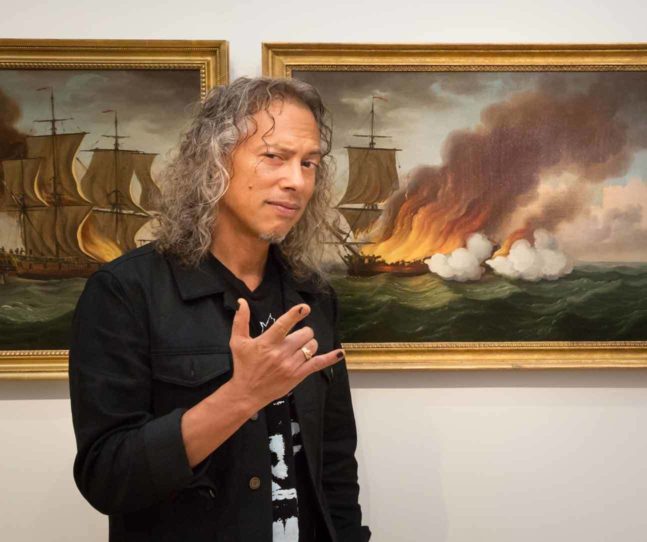 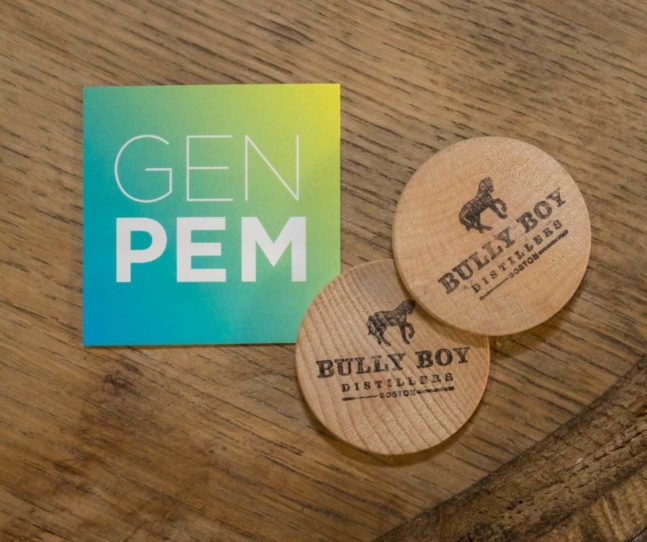