The Essex Block Neighborhood is the center of the museum’s architectural collection. Three centuries of extraordinary New England architecture, set in Federal-style gardens, may be found within this one city block. As a rule, the buildings whose exteriors are wood-clad have been moved to the site; those clad in brick or stone are original to the site. 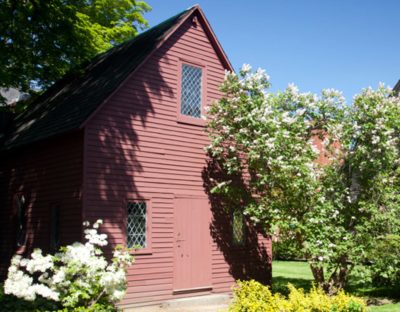 The first Quaker Meeting House (Federal Garden area) in Salem was built around 1688. The current building, erected in 1865 to resemble a Post-Medieval or First Period structure, is a reconstruction of the Quaker Meeting House and may contain some of the original timber framing. It is most interesting today as a very early example of an architectural re-creation. 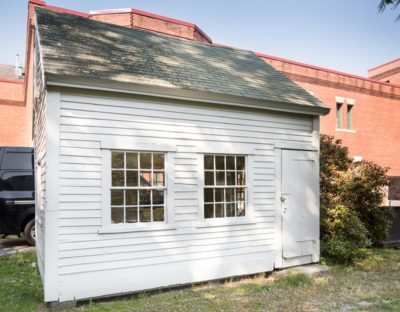 Ten-foot-by-ten-foot vernacular outbuildings (also called “10 footers”), such as the Lye-Tapley Shoe Shop (Federal Garden area), ca. 1830, were common at one time on the North Shore — a center for shoemaking in the nineteenth century. Very few 10 footers survive today. The building currently houses a collection of significant preindustrial shoemaking tools.

(Federal Garden area), ca. 1684, is one of the finest surviving seventeenth-century buildings in New England. It originally stood on a one-acre plot with a kitchen garden, an outhouse, and a well — opposite the jail used during the witchcraft trials. The house was moved to the museum campus in 1910. The style of this house is often called First Period or Post-Medieval — characterized by the extremely steep pitch of the gables, large central chimney, asymmetrical façade, batten door, diamond-paned leaded casement windows, and second-story overhang. One of the earliest buildings to be relocated and restored for historic interpretation in the United States, the house is a National Historic Landmark. 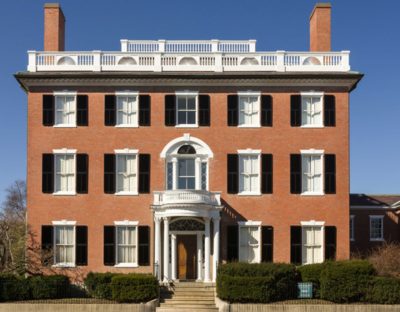 (13 Washington Square), 1819, was designed in the Federal style by an unknown architect for a wealthy Russian fur merchant. It is reputed to have been the most costly house erected in the United States to that date. The massive vertical façade and the four large columns rising from the ground to the third story on the south side make this one of the most impressive houses in Salem. The house is listed in the National Register of Historic Places. 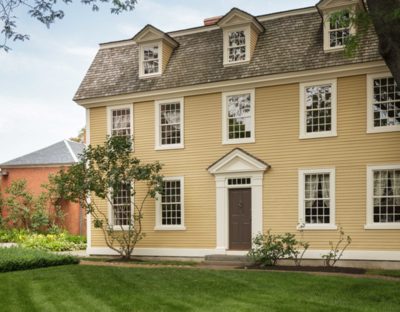 (126 Essex Street), ca. 1727, was built for fish merchant and ship captain John Crowninshield. This modest house in the Georgian style was moved one block to the museum’s campus in 1959. Like most houses in eighteenth-century Salem, it originally stood at the curb. Characteristics of its Georgian Colonial style include its long, rectangular shape with an orderly symmetrical façade, and the paneled door with pediment, transom lights, and pilasters — all reflecting an interest in classicism. The building is listed in the National Register of Historic Places.

(128 Essex Street), 1804, was built for John Gardner, a wealthy Salem merchant and nephew of Elias Hasket “King” Derby, mentioned in the preface to Nathaniel Hawthorne’s Scarlet Letter. This elegantly proportioned Federal-style house is one of Salem architect Samuel McIntire’s finest and best-preserved designs. It is a National Historic Landmark.

(128 Essex Street, rear) was built in the 1860s for the Pingrees, the third family to occupy the Gardner-Pingree House.

(Federal Garden area) was laid out in 1988 as part of the restoration of the Gardner-Pingree House and the Derby-Beebe Summer House. The design of the garden is evocative of the original Derby Mansion landscape plan, ca. 1798. 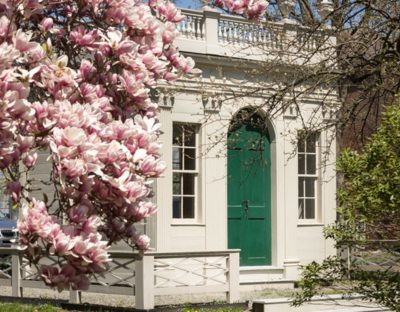 (Federal Garden area), 1799, is a one-room structure built in the Federal style and intended for serving light afternoon meals in a garden setting. All the trademarks of the Federal style are found in this small building, which epitomizes the gracious architecture and lifestyle of its era. It is one of only two surviving summer houses designed by Samuel McIntire. 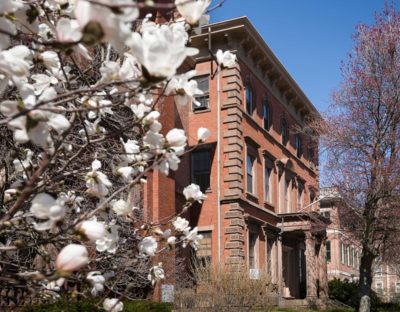 (132 Essex Street), 1851, was built for a wealthy Salem merchant. It is one of the finest cube-type, single-family Italianate houses in New England and was among the last great brick townhouses built in Salem. Boston architect Gridley F. Bryant chose the Romano-Tuscan palazzo variation of the Italianate style for this impressive structure. 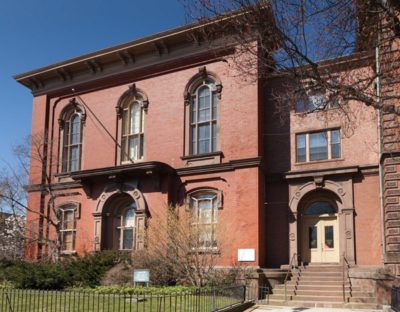 (132 Essex Street), 1856, designed by Enoch Fuller in the Italianate style, was built to house the Salem Athenaeum, a private library. It was purchased by the museum in 1906 and joined by a connector to Daland Mansion in 1907. Note the arched second-story windows and now-closed central arched door. Plummer Hall currently houses the Saltonstall Reading Room and three period rooms assembled by George Francis Dow. It is listed in the National Register of Historic Places.