ᎣᏏᏲ! My name is Kalyn Fay, and I’m a musician, artist, educator and citizen of the Cherokee Nation of Oklahoma. I am honored to have spent the summer as one of the 2019 Native American Fellows at PEM, working in the Integrated Media department. I would like to acknowledge that this summer, I resided in Salem, on the ancestral territories of Pawtucket, Pennacook and Massachuset tribes. I would like to thank them for the space I held. May we honor their land and their knowledge. 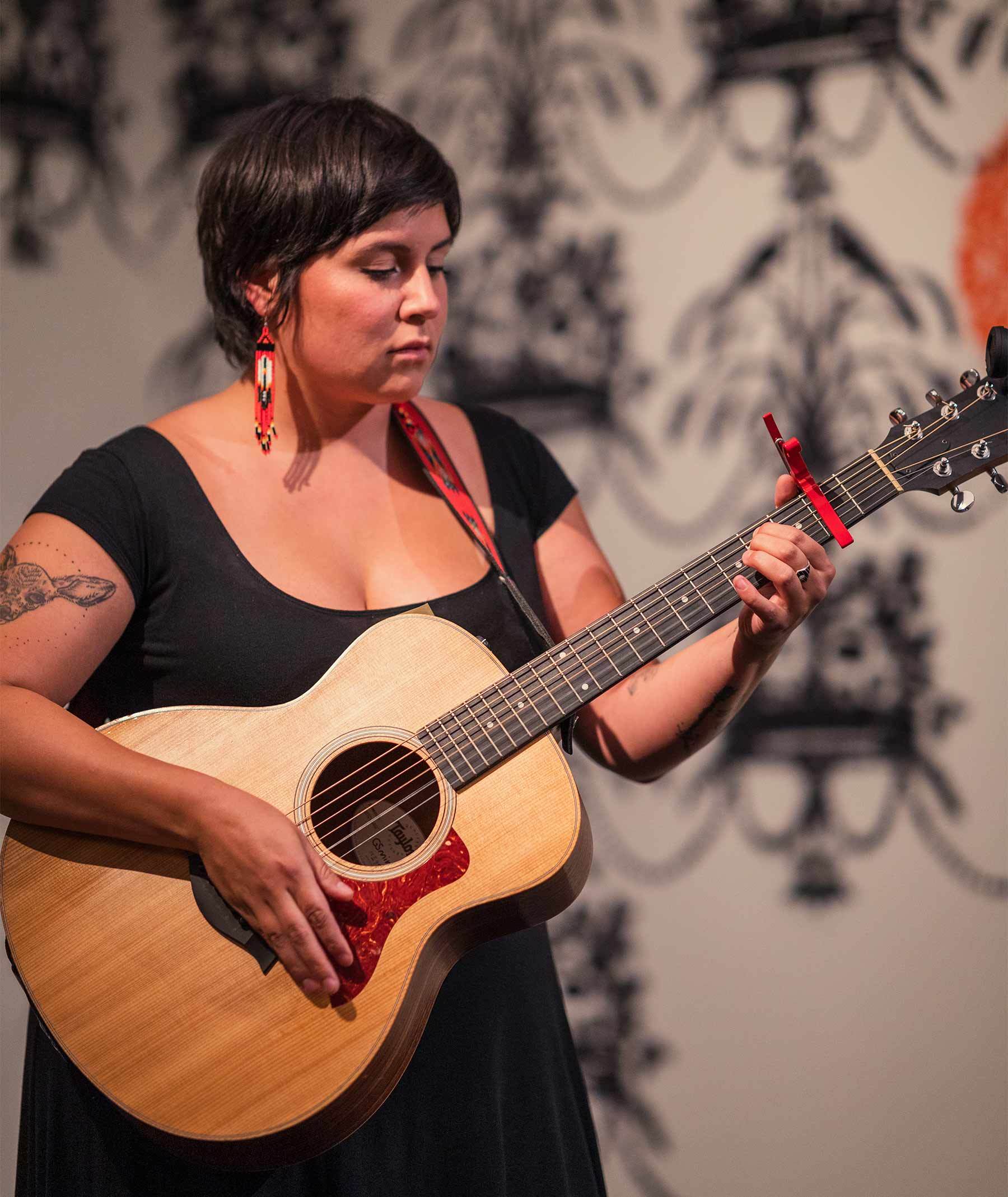 On an unpredictably stormy July morning, which I’ve quickly learned to be predictable here in New England, I ventured to Provincetown, Massachusetts, the location of the famous Hans Hofmann School of Art. With a compelling Hofmann exhibition opening in September alongside PEM’s new wing, my goal in journeying to where he chose to spend so much of his life was to gain a better understanding of Hofmann and his art practice. 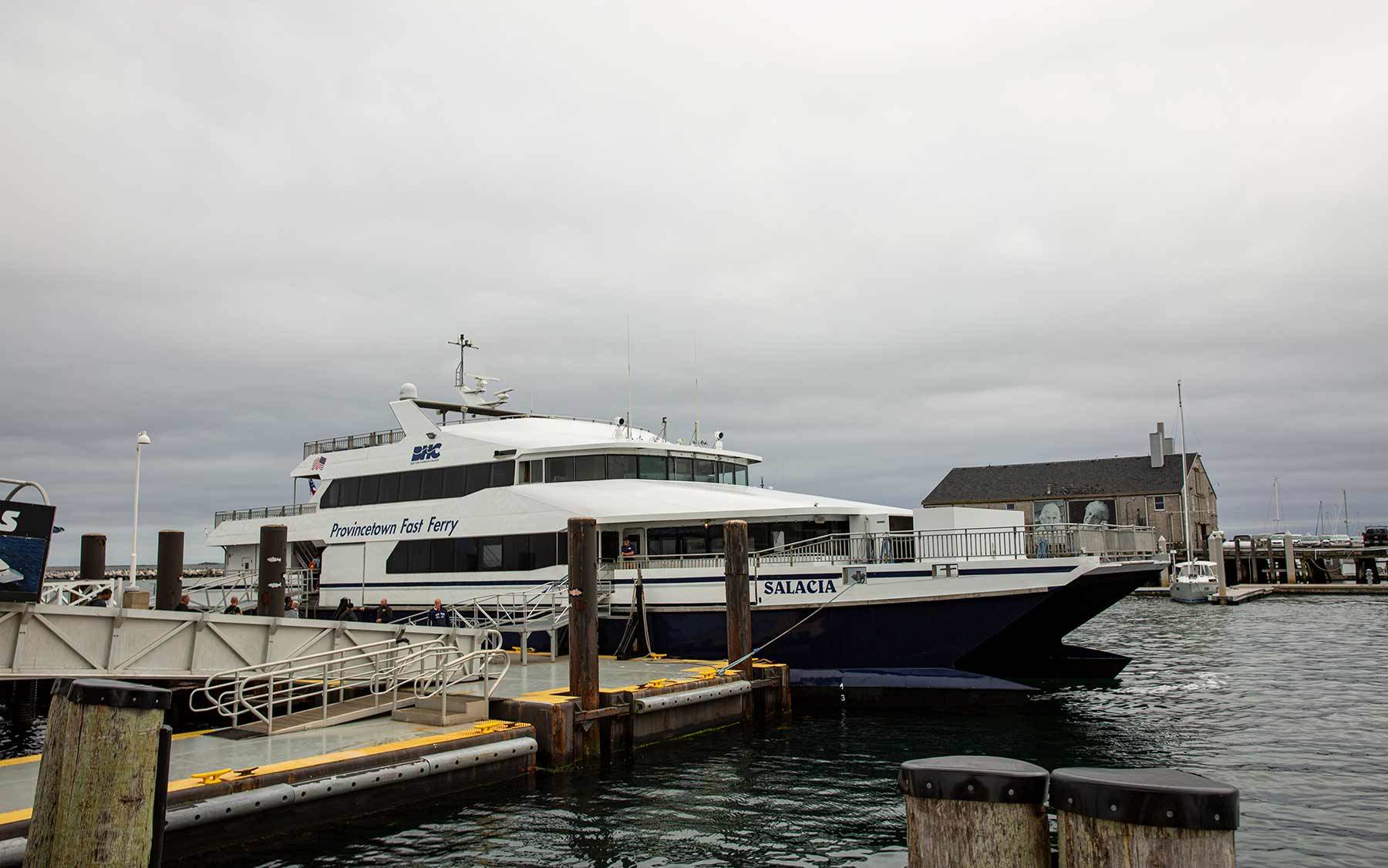 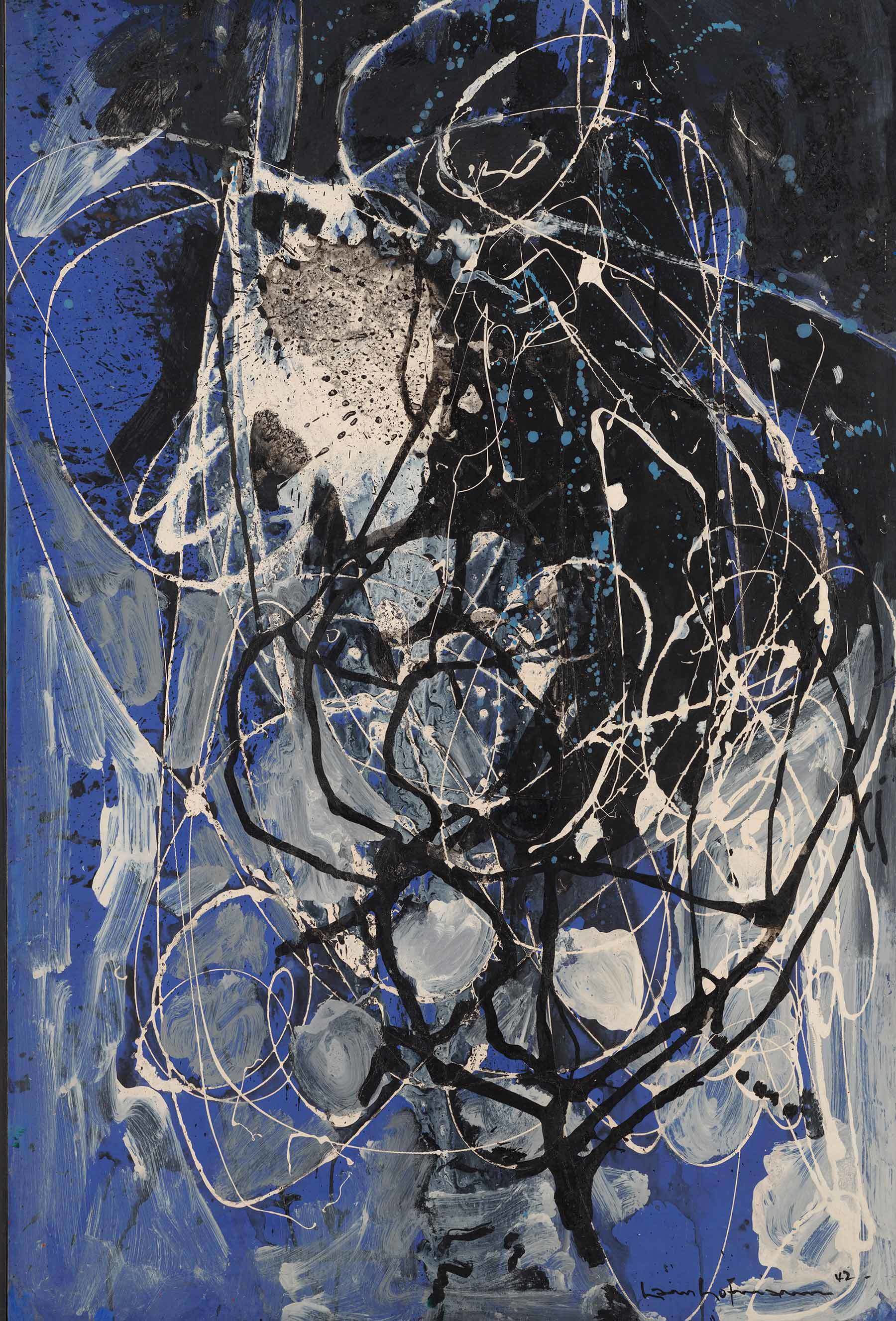 PEM’s Integrated Media department helps viewers gain a better understanding of the work they see, intellectually and emotionally, so I took on the task with a Hans Hofmann inspired song and soundscape. Bringing along only a handheld recording device and a small, worn journal, weathered by my incessant need to flip through the pages and scrawl notes, I set off to the tip of Cape Cod, accompanied by the incredibly knowledgeable sound engineer, Jason Reiner of San Francisco. 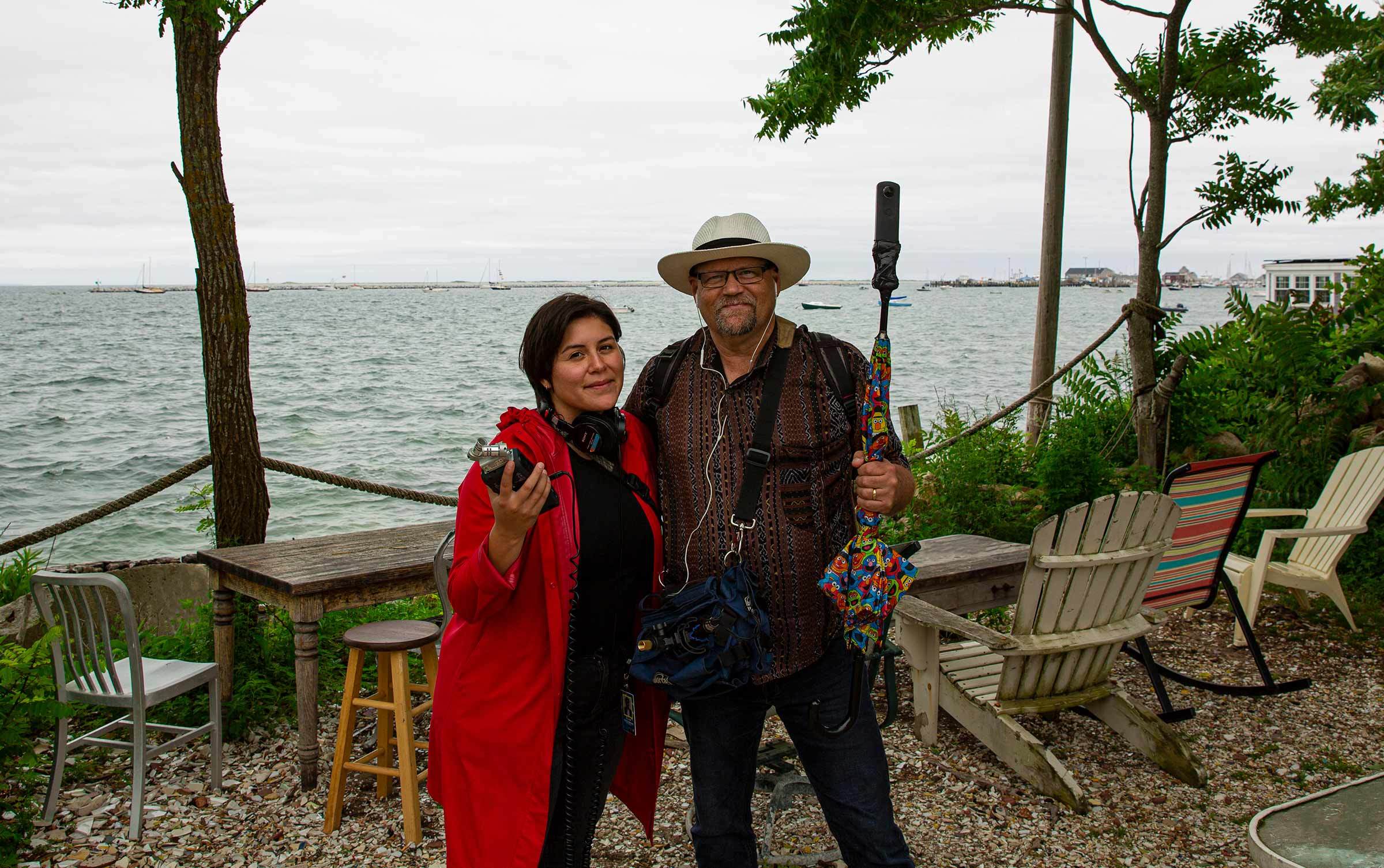 The trip was rough and only the second time this kid from Oklahoma has been a ferry passenger at sea. I held my composure as the rain slapped the windows and the choppy waves sent us up and down, back and forth, over and over again. Though conditions would have made even the most seasoned ferry-frequenter go green, just as we began to see Pilgrim Monument in the distance, the storm let up and the ocean began to calm. As the boat anchored at the port, I took a moment to analyze the cadence of nature and thanked Jason for the soothing Reed’s Ginger Candy that he had so cleverly brought along for the bumpy ride. Once I stepped off the ferry onto dry land, I closed my eyes, breathed in the cool salty air, and thanked creator for the space I held. 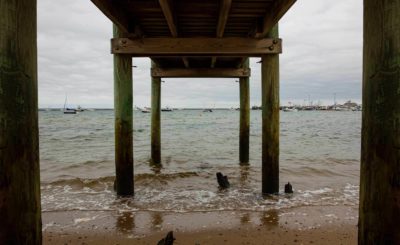 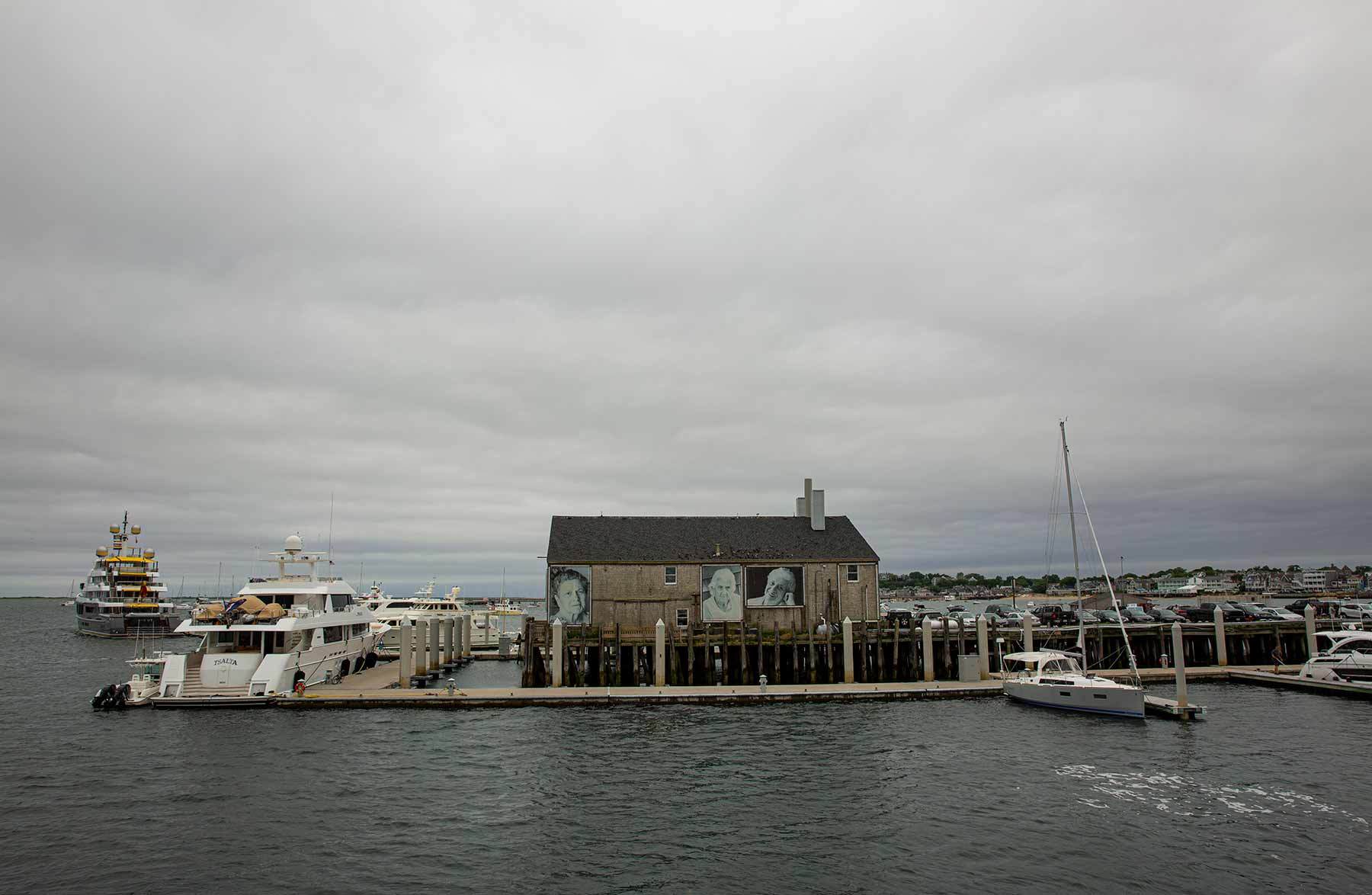 It was strange being so far from home and trying to understand such a new landscape and culture. I come from a landlocked, fly-over state, but I am so ingrained into Oklahoma, it feels as though I bring part of it with me wherever I go. Then, I thought of Hofmann and what he might have felt upon coming here, what some have described as “the end of the earth,” from his home in Munich, Germany. This gave me a better perspective, and emotional connection to Hofmann. Both as a teacher and a practitioner, Hofmann famously wrestled with the “push and pull” of a painting, which he described as the way form, color, texture and space create the effect of movement. Though Hofmann and I come from two distinctive places with very different experiences, we could share this new location and what it feels like to be pushed and pulled in new directions. 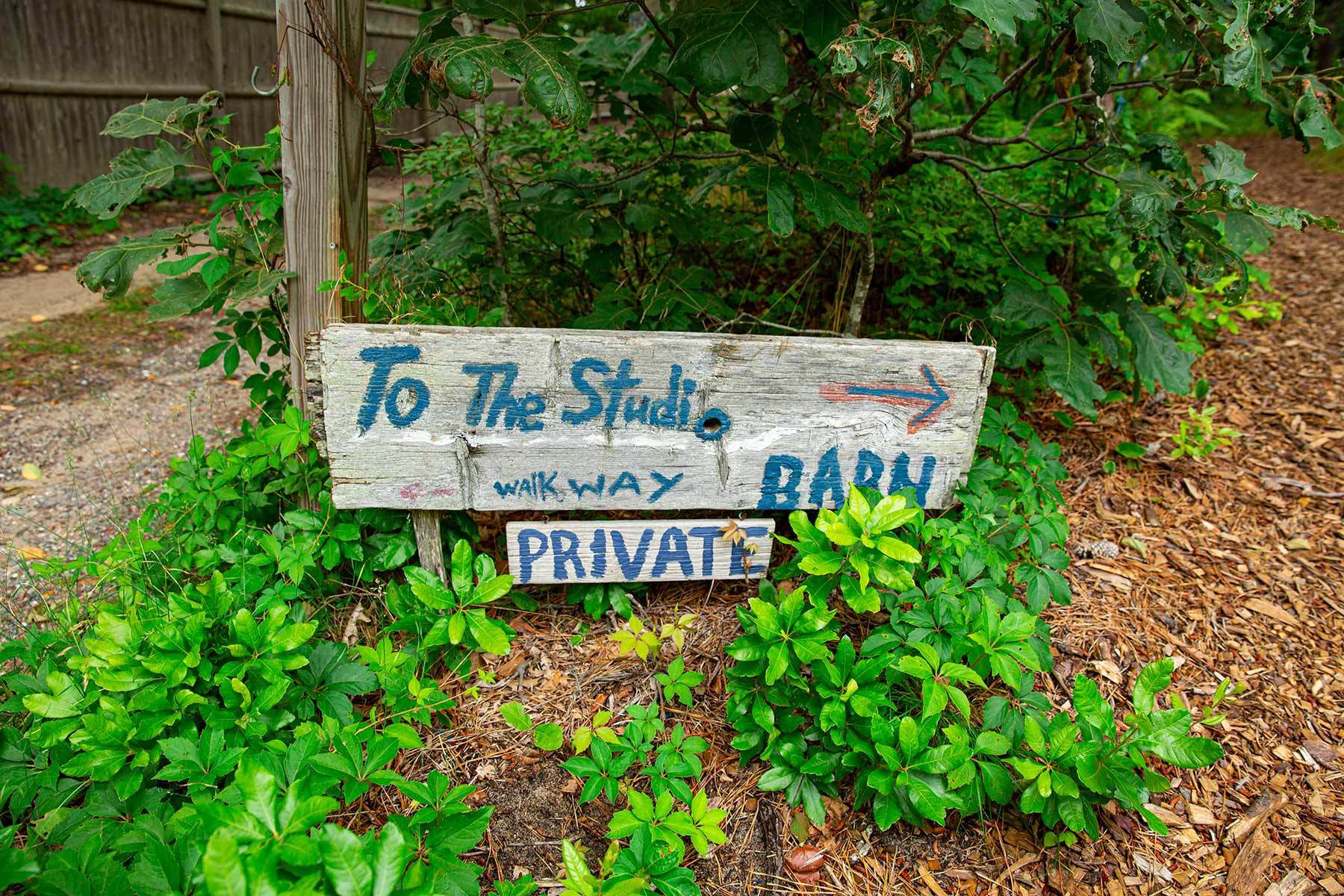 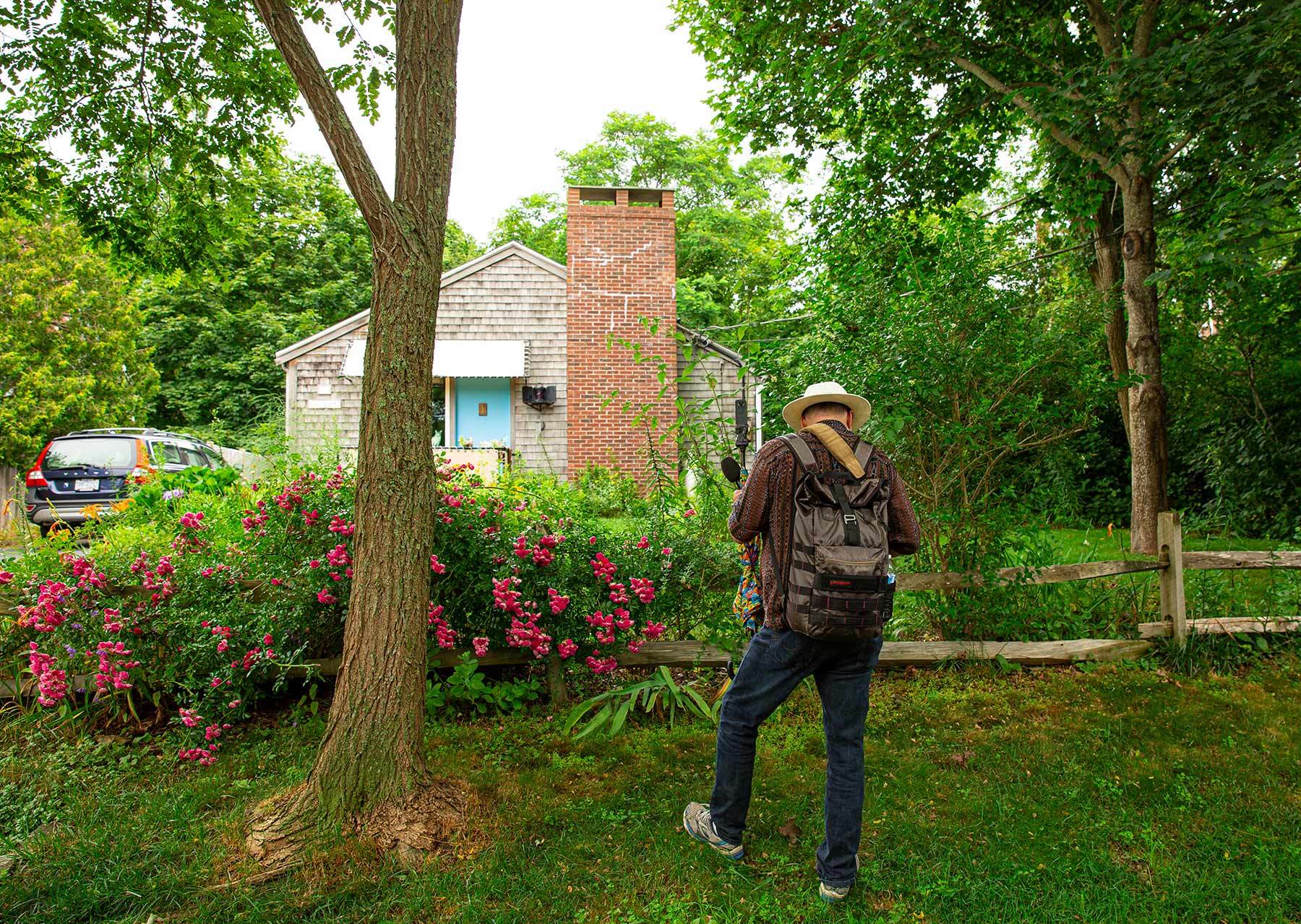 As I walked the small roadways and observed the landscape dotted with lush flora and colorful galleries, houses and shops, I couldn’t help but recall a recent conversation I had with a Spanish sound artist I was lucky to have met while exploring Salem. In the conversation, we shared our cultural background, and he gifted me the word querencia. The best way he could translate this metaphysical concept was “the soul recognition one has with a place and the experiences one has within that place.” As a Cherokee woman coming from Oklahoma, I was taught early on the connection I have with land, the importance of how I interact with and respect land and being thankful for the space I take up. It was incredible to finally have a word for how I felt about my Oklahoma home, the golden rolling hills, the sparkling cool rivers under a hot summer sun, the waving Tallgrass Prairie as dusk turns the sky cotton-candy shades of blue and pink. It was equally as incredible after pouring through Hans Hofmann’s work and writings to see he, too, experienced querencia with Provincetown, the landscape that moved him and the emotional experiences he had there. 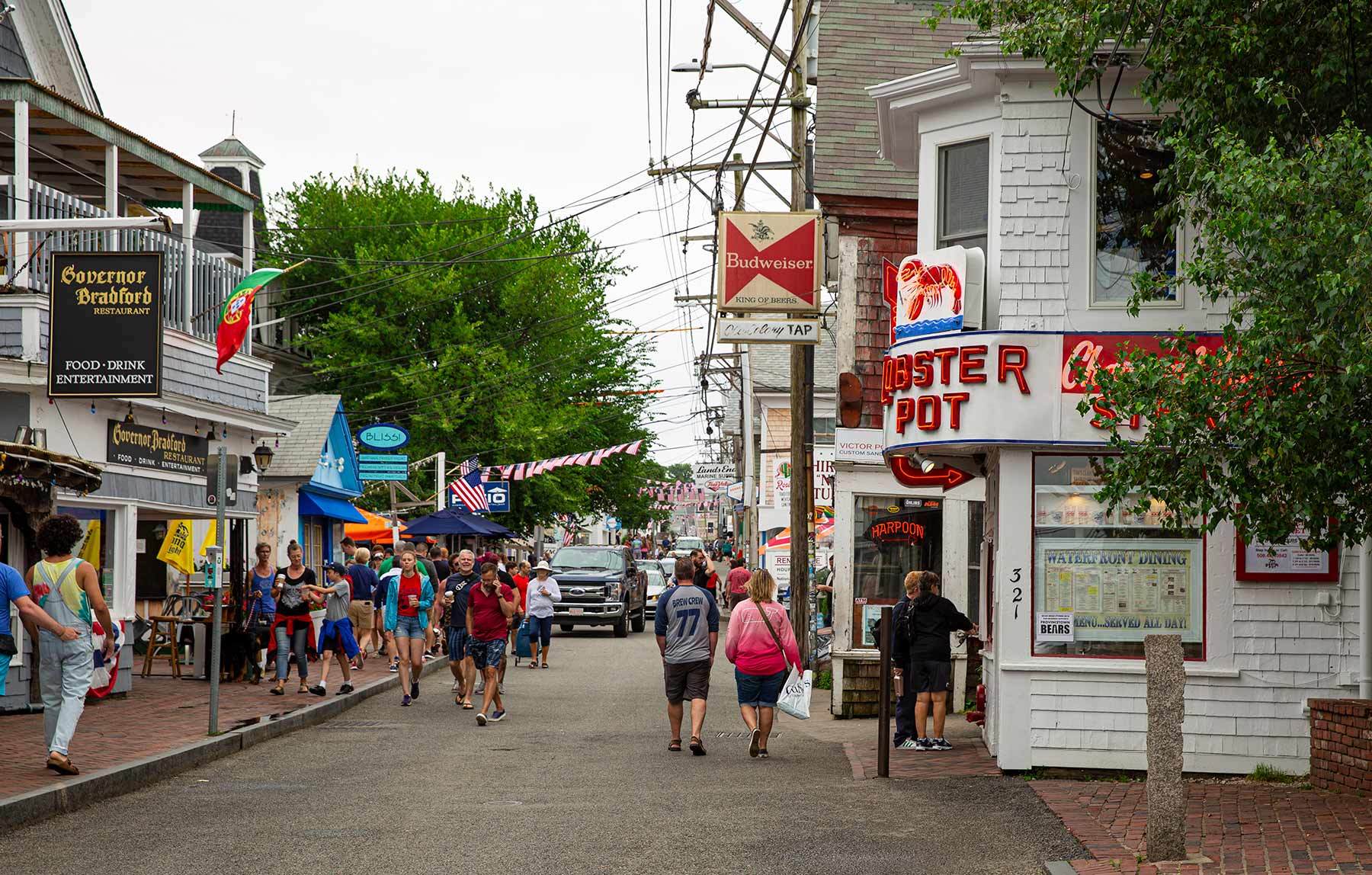 As an Indigenous musician and artist, I find landscape and the emotional connection one has with the land some of the most intriguing and moving aspects of art making and art consuming, whether that be visual or performance. While in Provincetown, I recorded the bustle of the town, as well as the sounds of the land. I penned how I thought it related to Hofmann’s work, how the land moved and the people moved within it, and how it made me feel to be there. When I returned to Salem to begin composing, I was overcome with creative energy and quickly penned a song, titled Over Again, based on Hofmann’s theory of push and pull. I sat with my writings and recordings a little longer, but quickly decided that the next piece needed to be a collaboration. I needed listeners to get a broader understanding, emotionally, of what it means to be far away, to be travelling, to take in the moments of newness. I then contacted my musician and composer friend Matt Magerkurth in Oklahoma to collaborate on a piece, so that we were able to have distance between us as we worked. The soundscape titled, In the Wake, is based off my personal writings associated with land and distance, Hofmann’s writings, and his painting In The Wake of The Hurricane. 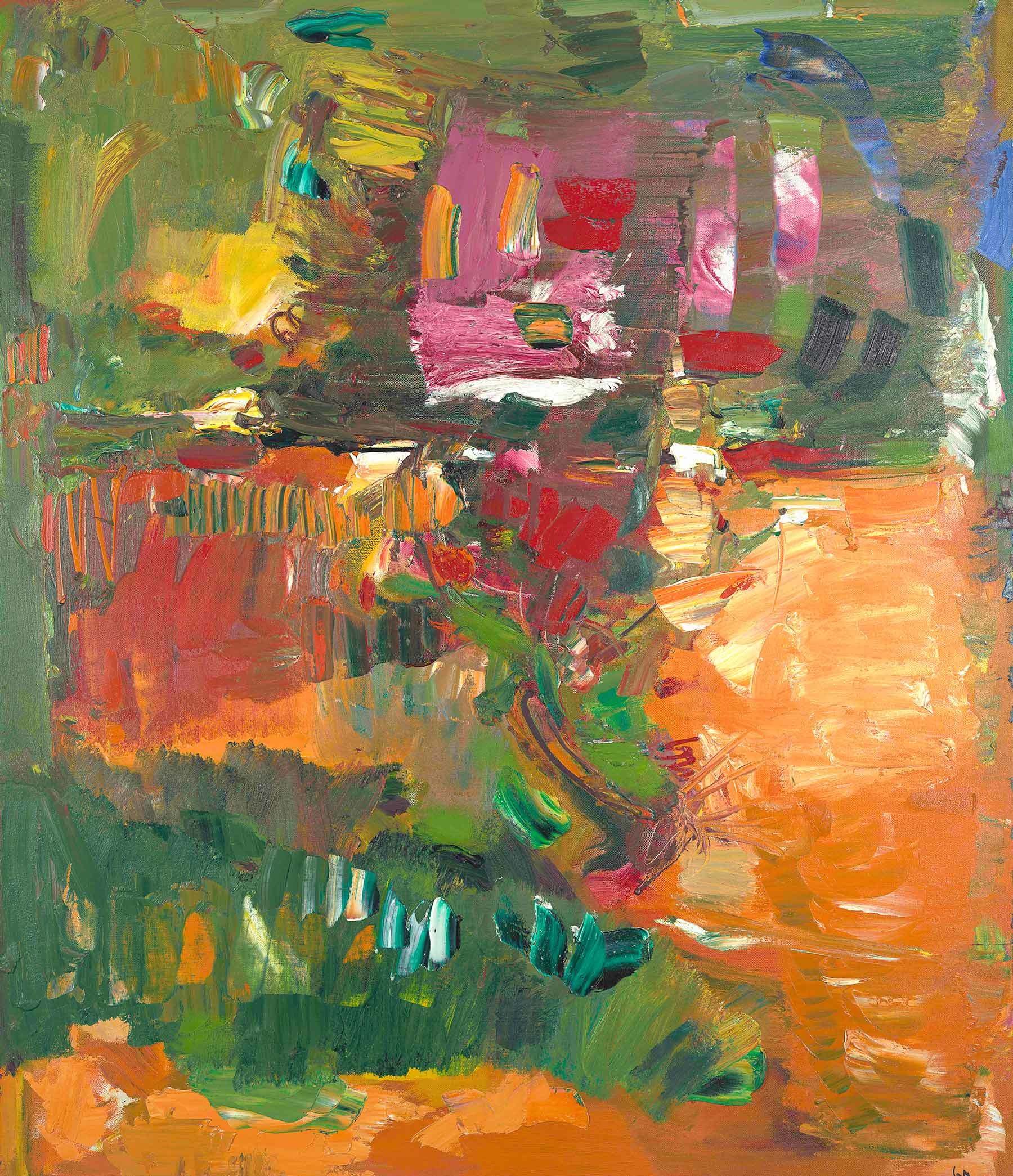 Hans Hofmann’s work is moving in a way that is hard to describe, which is why music was my translator. With so many aspects to this exhibition, from soundscapes to a hands-on tactile painting, there are many ways to learn about his work, process and the emotional ties he had with the landscape, his querencia. I hope that upon visiting Hans Hofmann: The Nature of Abstraction, you will also feel moved. 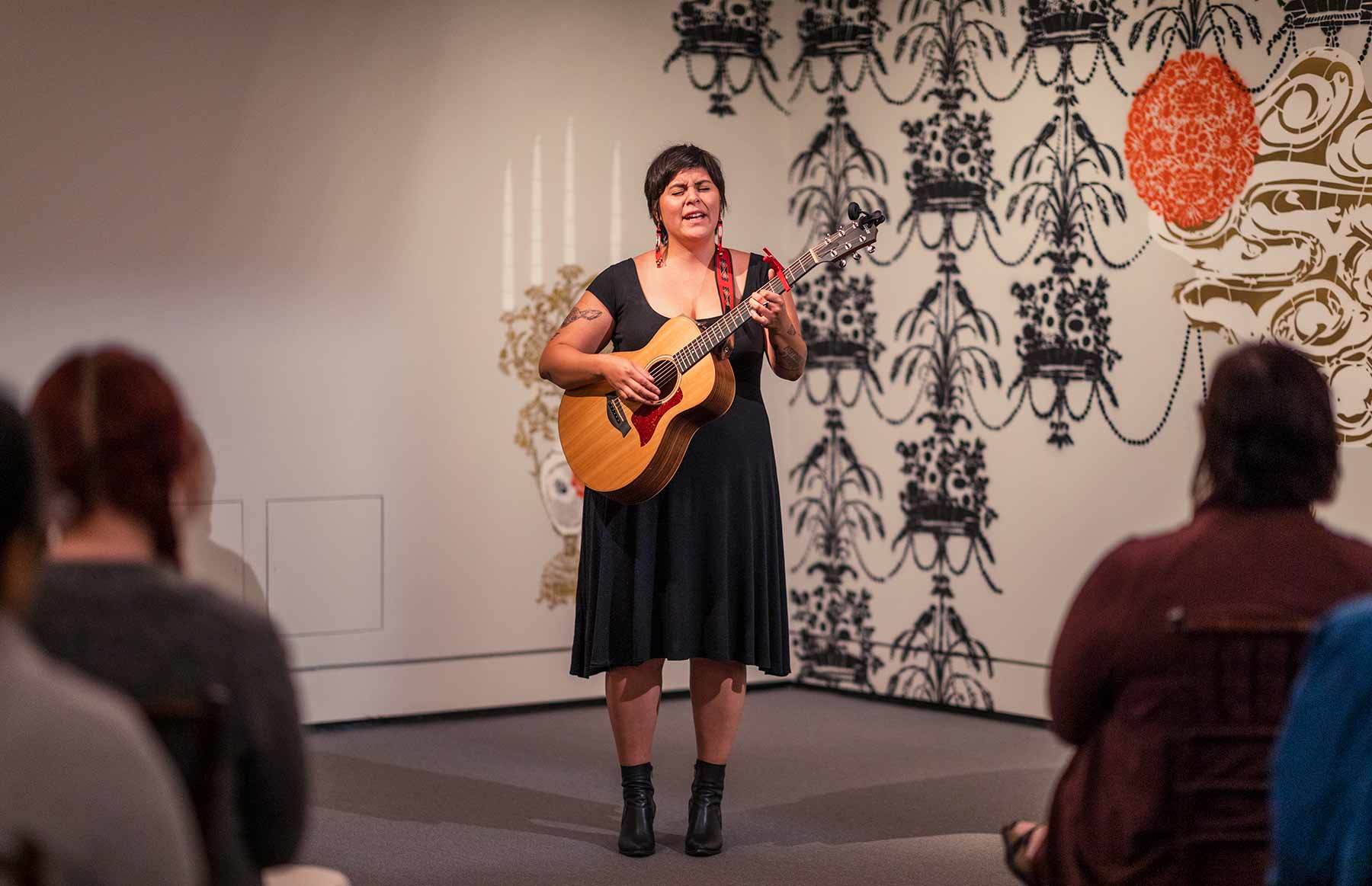 Kalyn Fay gives a concert for her colleagues in the new wing of the museum, before departing from her fellowship. Photo by Mel Taing 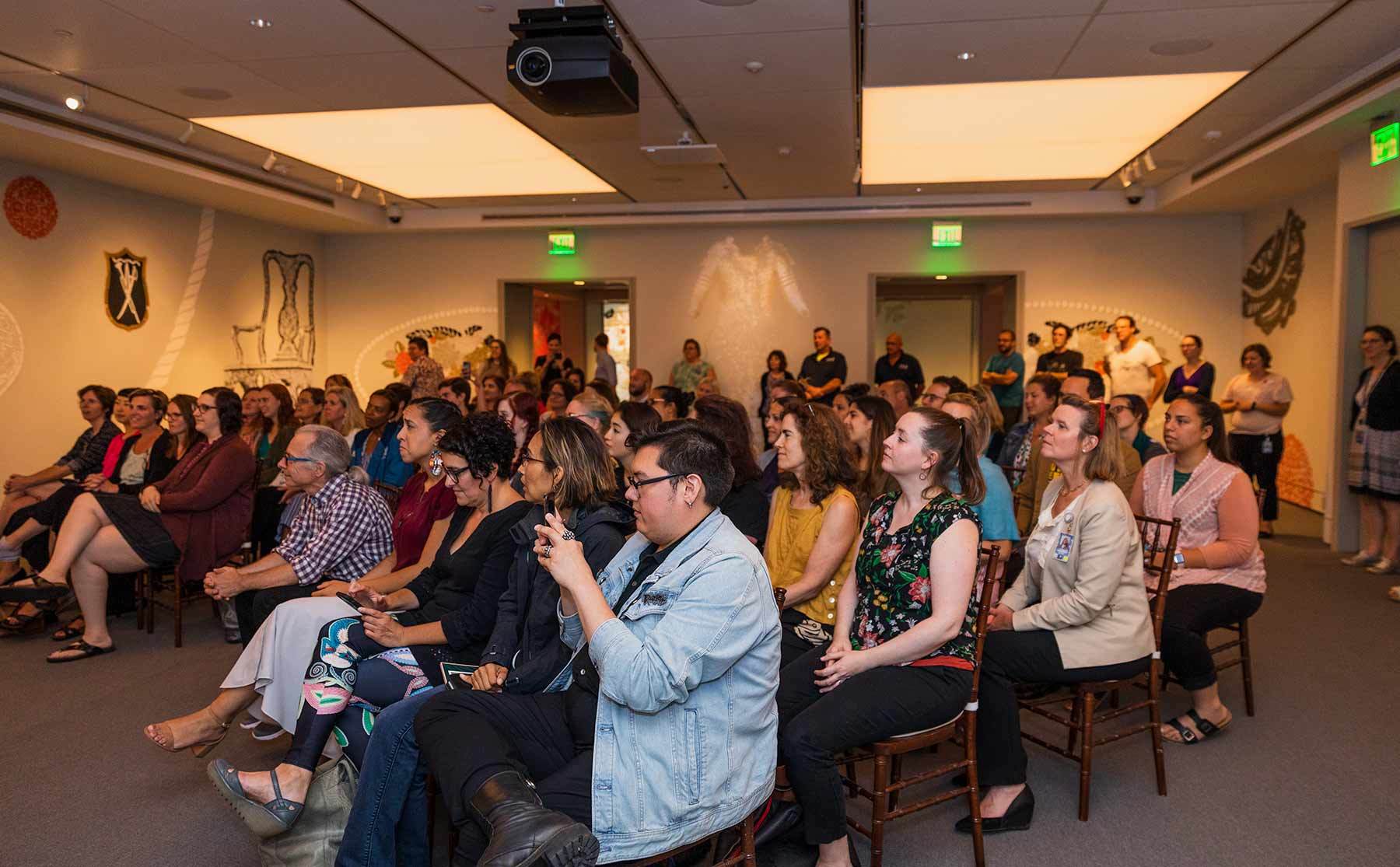 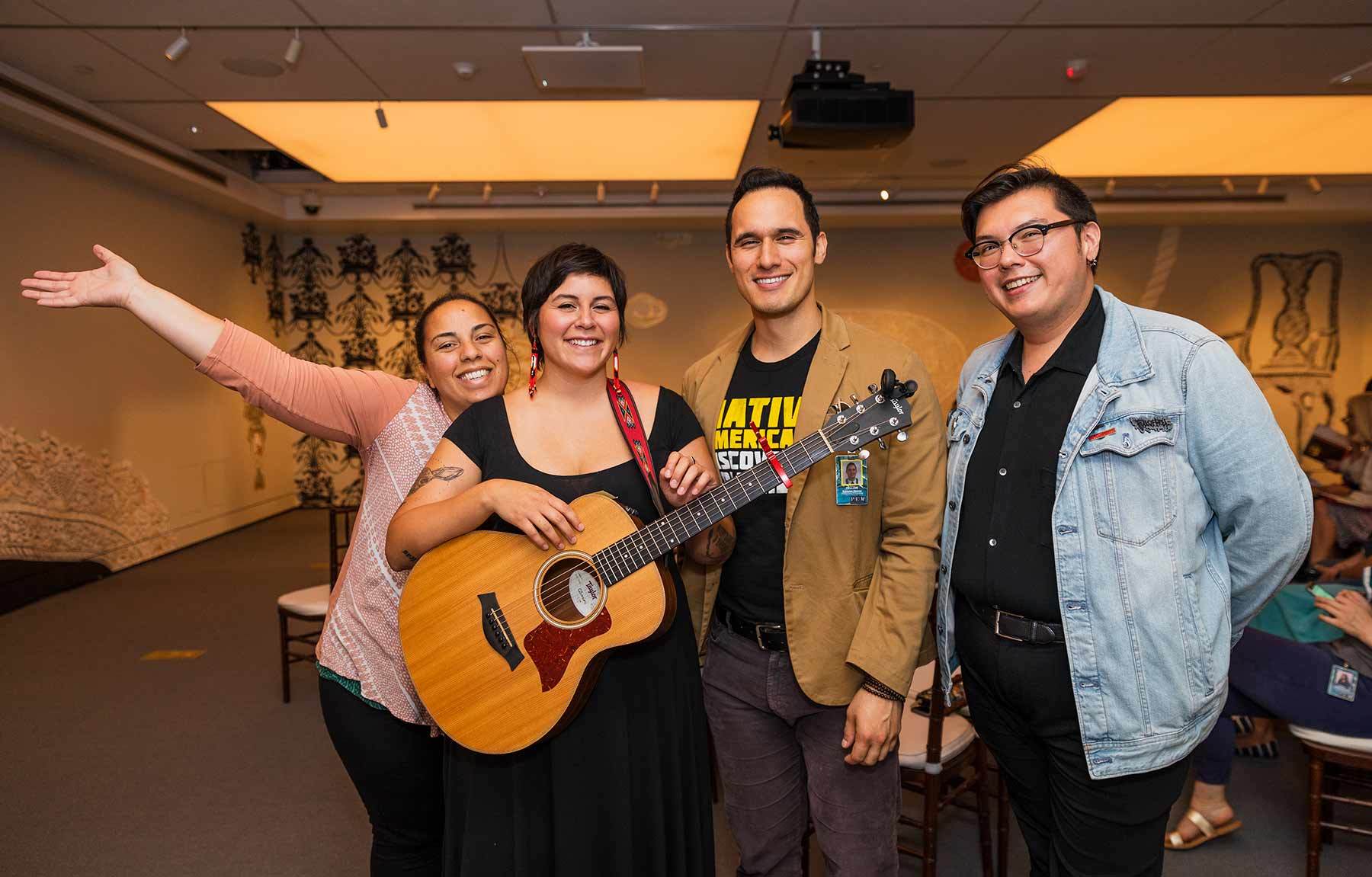 The Native American Fellowship Program at the Peabody Essex Museum is made possible by a generous grant from The Andrew W. Mellon Foundation. 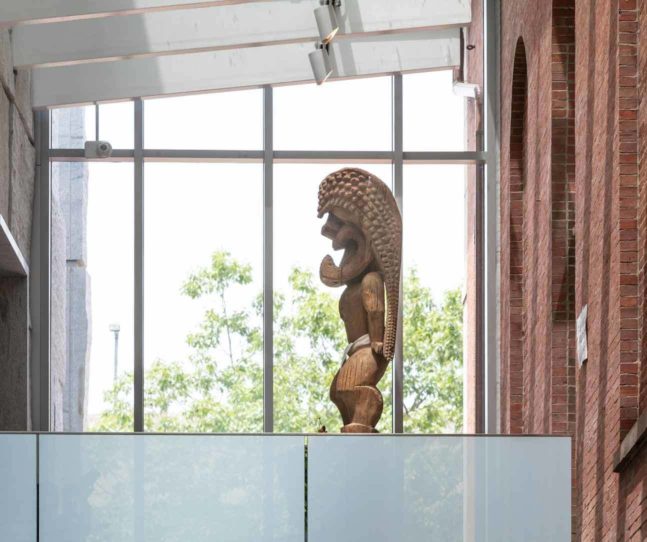 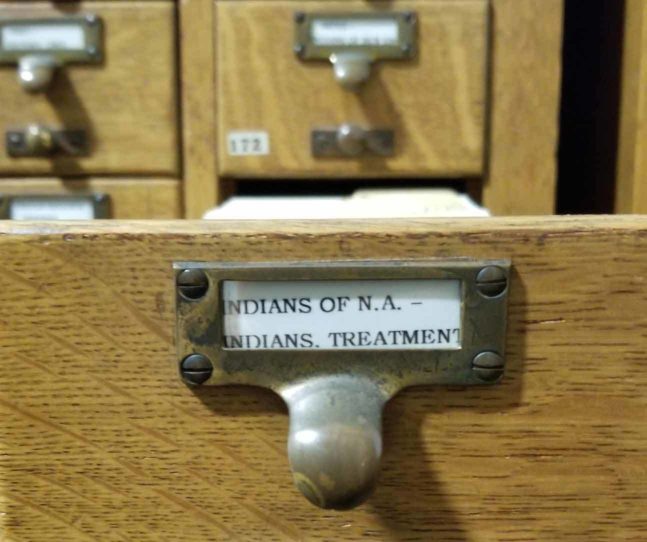 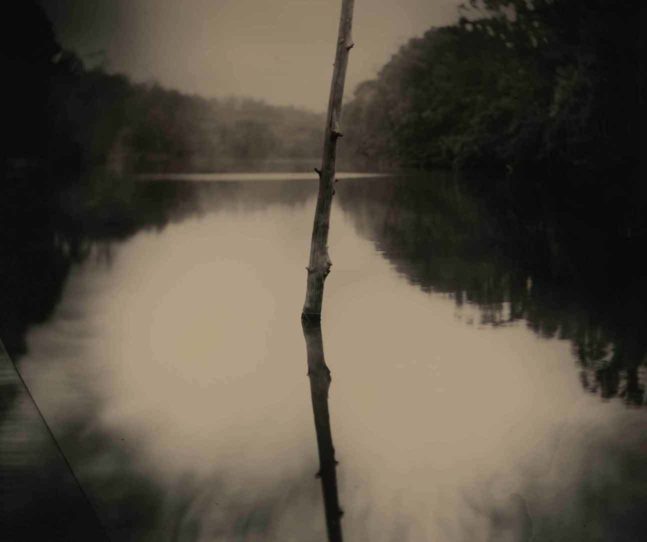