. . . again the rebels rushed furiously on our men.
—a Hessian soldier 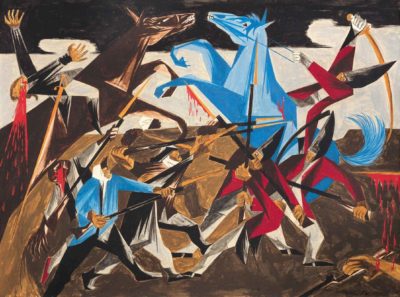 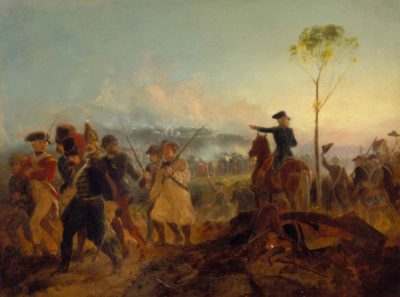 The Battle of Bennington on August 16, 1777, was a violent clash between a group of combatants whose backgrounds were diverse in nationality and race. Uniformed Hessian, or German-born, professional soldiers hired by the British army were among the enemy troops that battled against the American “rebel” forces, which included black soldiers, as Lawrence did in this painting. By quoting a letter written on August 31, 1777, by a Hessian soldier, Lawrence used the words of the defeated opponent to testify to the strength of the Americans.

A motley band of colonists, visually distinct in costume, expression, and skin tone, unite in battle against a regiment of ghoulish, clone-like redcoats. At the center of the painting, two colonists, one black and one white, plunge their bayonets in parallel motion into the flank of the enemy’s nightmarish blue horse. A white Continental Army officer astride a rearing horse and a black soldier below suffer the same devastating head injuries; both men fall backward, blood streaming, faces grimacing, arms extending at similar angles to oversize hands. Despite visible differentiations in race and status, these men fight and die in like manner to counter the forces of oppression.

In the process of drawing attention to black participation in such significant historical events, Lawrence also seems to explore the possibilities for racial integration, as part of what he described as “[man’s] constant search for the perfect society in which to live.” In October of 1954, the year of the work’s completion, the United States military announced the abolishment of the last segregated units, mere months after the Brown v. Board of Education decision sparked massive resistance to school desegregation.