The summer soldier and the sunshine patriot will, in this crisis, shrink from the service of his country.
—Thomas Paine, 1776 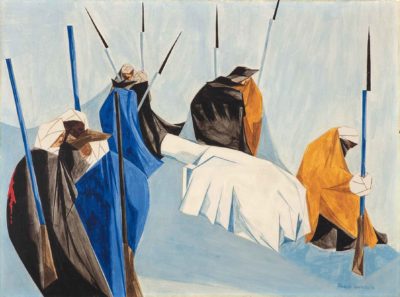 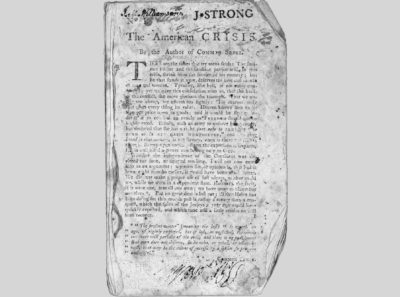 Thomas Paine first published these lines in a pamphlet called The Crisis during the British siege of New York and incursions into New Jersey. In the wake of setbacks against the British forces, he sensed a wavering commitment in many Americans and urged them to commit to the freedom cause. This painting shows groups of revolutionary soldiers huddled together against the cold in contrast to the single figure at the far right. Seated alone and pensive, he is one of the 9,000 black soldiers who fought within the approximately 200,000 strong continental army and militia. Lawrence drew attention to the solitary struggle of this particular patriot by rendering him in sunshine yellow and positioning his musket firmly upright, signaling his steady devotion.

Tamir Williams Responds:
Tamir Williams is a doctoral student in the History of Art Department at the University of Pennsylvania.

Lawrence depicts a moment of reflection among a group of weary Continental Army soldiers as they work to shield themselves against the bitter winter winds. The bloodstained uniform of one soldier in the lower left corner of the image and the men’s postures — slumped shoulders and curved backs — suggest that this pause for reflection comes after defeat in a recent battle. As the panel’s titular excerpt contends, it is in such periods of cold defeat and vulnerability that the dedication to the fight for liberty becomes uncertain for the fairweather soldier.

The viewer encounters the first group of such soldiers in the lower left corner of the panel. The three men huddle together and lower their heads as if to discuss their decisions to stay or flee. The wavering loyalty of the soldiers is further emphasized by their tilted muskets, which convey fluctuation.

The composition guides the viewer’s eyes along the curved line of indecisive soldiers to the solitary, pensive Black soldier sitting against the idle cannon at far right. Unlike his comrades, he firmly positions his musket upright, creating a perpendicular angle that works to signal his steady devotion to the cause.

Lawrence’s choice to dress the figure in a yellow cloth that suggestively connotes “sunshine” patriotism is ironic — in fact, he asserts that the soldier’s dedication withstands all seasons and crises. Lawrence invites the viewer to consider that many Black soldiers in the war for independence were unfaltering, even though emancipation did not come to the nation until nearly a century later.

“The fear lived on in their practiced bop, their slouching denim, their big T-shirts, the calculated angle on their baseball caps, a catalog of behaviors and garments enlisted to inspire the belief that these boys were in firm possession of everything they desired,” Ta-Nehisi Coates wrote in Between the World and Me. When I read this passage, I think about panel 7 from Jacob Lawrence’s Struggle series. The title of the painting quotes from The American Crisis, Thomas Paine’s series of revolutionary pamphlets. The painting shows men standing in snow, wearing coats and blankets and holding weapons.

The characters remind me of kids standing on the corners doing what they have to do to survive in today’s society.

Just in Washington, DC, there were 160 reported deaths by homicide in 2018. Through mid-December of that year, 534 people were shot in the District, according to The Washington Post. Many of them were shot because of gang violence. Like in revolutionary times, gangs are created because people join together to fight back and protect their own. Another way this painting relates to the modern day is through gun violence.

The Declaration of Independence states that the British king “has constrained our fellow citizens taken captive on the high seas to bear arms against their country, to become the executioners of their friends and brethren, or to fall themselves by their hands.” When people today fall into gangs or are “taken captive,” they’re given weapons to kill their brothers, sisters, and friends. It’s all a trap: they can do as they’re told and that leads to their downfall, or they don’t do as told and it still leads to their downfall. This highlights the vulnerability of black teenagers.

“The summer soldier and the sunshine patriot will, in this crisis, shrink from the service of their country,” Thomas Paine wrote in late 1776. Lawrence used this quotation because it represented the fact that Americans were trying to escape the tyranny of the British. He noticed the irony in Paine’s urgent call for freedom and decided that his painting would also symbolize an urgency for freedom.