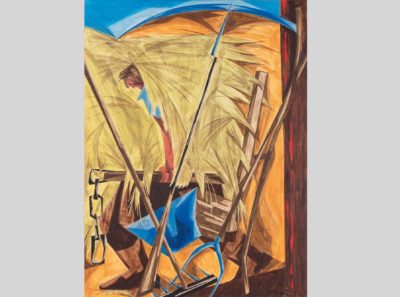 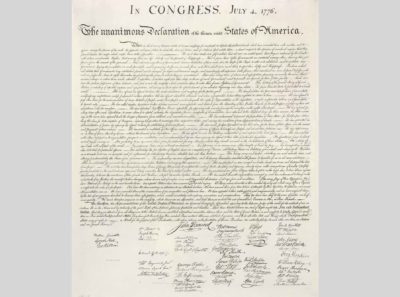 Lawrence honed in on the final words of the Declaration of Independence to envision this solemn pledge as a bounty and a burden for each American to carry in a democracy. A rake and the revolutionary musket cut the composition into two equal halves, creating a wedge around a farmer laboring in 1776. He struggles to bear the burden of his wagonload of hay, a symbol of the nation’s bountiful ideals of freedom, which may become a struggle to uphold and defend.

In Lawrence’s Time:
The Declaration of Independence is not a legally binding document, but all those identifying themselves as Americans nevertheless continue to be honor bound by a mutual pledge to uphold the principles of equal human rights—“Life, Liberty and the pursuit of Happiness.” To title caption Panel 6, Lawrence excerpted the final sentence of the Declaration of Independence.

In this panel Lawrence presents visual ideas relating to the importance of the colonial community, highlighting the role of farmers and the contribution they made to American freedom from British rule. The lone farmer, bearing the burden of a wagonload of hay, carries the weight of independence forward, serving as a key figure of human survival in a hostile environment. The farmer must be prepared to clear the land, till the soil, plant the seeds, and attend to the survival of the crops needed to provide food for himself and the community. Hard labor is implied here as we see the tools needed to ensure a bountiful harvest: rake, pitchfork, and scythe. A revolutionary musket that cuts the composition into two equal halves symbolically announces a measure of self-inspired action implying freedom from British rule.

The spatial relations force the viewer to become a spectator looking in from outside the picture plane. Lawrence uses line as compositional content and it is his individual way of defining form. Within the subdued palette of this well-balanced composition — umbers, ochers, and blue — an intended accent of red keeps the human action visually centered.

The struggle to survive and to declare one’s freedom with honor is what is expressed in this panel.

The Declaration of Independence states the conditions by which American freedom was obtained, but the artist reminds the viewer that freedom is often hard won and requires vigilant review at all times. Lawrence brings historical conscientiousness and political astuteness together, singling out the universal right to be free, including from racial prejudice and injustice in modern America.