We have no property! We have no wives! No children! We have no city! No country!
—petition of many slaves, 1773 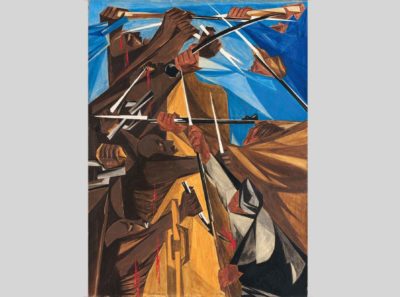 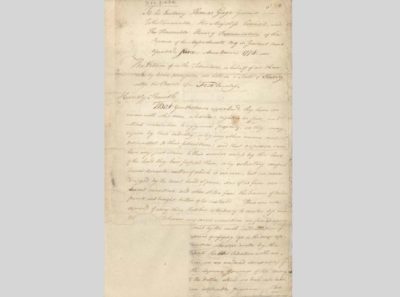 The title of this panel derives from a petition for freedom made by an enslaved man self-identified only as “Felix” to the governor of the Province of Massachusetts Bay and its House of Representatives on January 6, 1773. In the petition, Felix admonished the “vicious” enslaved willing to take up arms in their fight for freedom. He then earnestly appealed to the authorities to recognize the “wise, just and good” course of action and to provide the vital “relief” prayed for by the peaceable enslaved persons for whom he adjured. In pairing this image of a violent uprising carried out by enslaved people with a petition premised upon nonviolence, Lawrence spotlighted two divergent paths to freedom. Choosing which path was still a difficult decision for civil rights leaders and participants in 1955. In Felix’s petition, Lawrence likely saw a foreshadowing of challenges to Martin Luther King Jr.’s nonviolent stance.

Lawrence’s visualization of this slave petition suggests the extent to which people will go to be free. Anyone looking at this piece realizes that the artist had a historian’s eye, and here he has thoughtfully used his artistry to illustrate a historical act of resistance — an outcry for freedom.

Lawrence understood the power of his craft, and the voice this work in particular would give to those who resisted oppression. Tracing every strike and open wound of his subjects, Lawrence uses said craft to draw us intimately toward their plea. His use of sharp lines and saturated colors unearths the depths of their defiance, compelling onlookers to partake in the emotion portrayed by these individuals. As a moment frozen in time, this image captures a type of torment that is agonizing and raw — reminding us of Lawrence’s unique ability to marry art and history.

By delving into petitions such as the one from Felix, Lawrence is able to make concrete the painful voices and the unwavering hopes of the enslaved, who were so often anonymous and silenced.

Here the carnage, the blood, and the struggle that Lawrence renders remind us that embedded in the experience of the enslaved was the desire for freedom, and the desire to realize the rights that all Americans seek. This neverending sentiment is entrenched in the souls of the oppressed irrespective of time or circumstance. It is a cautionary tale as to the powerful appeal of freedom and fairness, and what people are willing to sacrifice to ensure that America lives up to its stated ideals.

Tyler Burston Responds:
Tyler Burston, a senior at Friends Seminary, is a writer, artist, actor, and musician. He is interested in the ways that art can be an agent of social justice and a healing practice. His fundamental aim is to craft projects that celebrate and comfort people experiencing marginalization. Tyler will continue his studies at Washington University.

The power of this piece lies in its ability to illustrate some of the most complicated and divisive aspects of the black American experience in a singular image. The panel, cleaved in two by the clash of two factions opposed visually, physically, and ideologically, symbolizes the many conflicts that manifested themselves in black American narratives. As a stolen, oppressed, and dehumanized people, black Americans, simply by recognizing our own humanity, stand in conflict with those who wish to rob us of that humanity. Personally, it is easy for me to feel that I am in a perpetual state of war with white supremacy. Like other black Americans, I am perpetually vulnerable to the violence that white supremacy inspires, and thus combating it is an essential means of survival.

This “war” is one that I have inherited, and with that inheritance comes a daunting body of questions regarding how this war is to be “fought.”

Which paths to freedom are the most effective? Which are the most ethical? Is structural reform or complete revolution the answer? Does virtue lie in violent revolt or nonviolent resistance?

The tragedy of the panel lies in the way it brings to mind these deeply challenging questions yet supplies no easy answers. In the image, we see a violent slave revolt, a physical manifestation of the war against white supremacy. The chaos, confusion, and suffering intrinsic to this form of war are evident in the strained faces and bloodied bodies of the revolting slaves, which contrast with the unscathed and faceless profiles of their enemies. The violence in the image is juxtaposed against its title. A quotation from the petition for freedom signed by a slave known as “Felix,” the title represents the ideological opposite of the rebelling slaves. Felix decries violent revolution in favor of a direct appeal to a powerful man, nonviolently requesting that freedom be granted to him. The panel presents two conflicting ideologies, two ways of conducting “war” against white supremacy, and forces me to consider the consequences of both.

I can find little militaristic glory in the violence present in this art. The cruelly detailed images of black suffering in the painting are heartbreaking. They are a tragic reminder of the death and pain that pollute my people’s story. I mourn every martyr of the war against white supremacy, from every ancestor murdered while rebelling to every child victimized by police brutality. There is a price to physical resistance, and I cannot welcome any war that will produce more black death. However, it’s hard for me to celebrate the attitudes of those like Felix. How far can begging for our freedom truly take us? What use are these appeals if our oppressors ignore them? Do such appeals simply make our resistance palatable? Should freedom be asked for or taken?

Like the frame, split visually by the conflict of two factions, I often feel split internally by these questions, between multiple visions for a revolution. The revolution, however, is nonetheless necessary.