I alarmed almost every house till I got to Lexington.
—Paul Revere 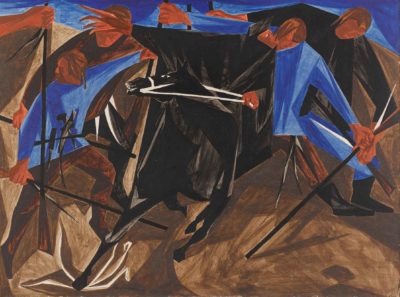 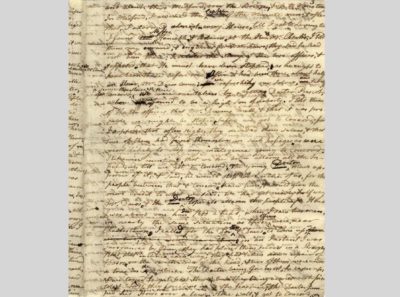 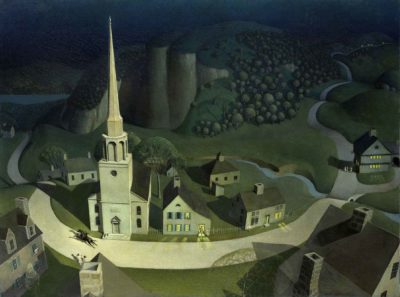 The title caption for Panel 4 derives from Paul Revere’s 1798 letter to the clergyman and historian Jeremy Belknap recalling the harrowing midnight ride through enemy lines on April 18, 1775, dodging sentries along the way, just ahead of the deployment of British troops. Based upon this account, Lawrence imagines the moment when Revere rushes into Medford, Massachusetts, on horseback pausing only to whisper the military intelligence to the captain of the Minutemen amid a swirl of arms and muskets before galloping off to alert, as he said, “almost every house” until reaching Lexington.

An excerpt from Revere’s letter follows:

In Medford, I awaked the Captain of the Minute men; & after that, I alarmed almost every House, till I got to Lexington. I found Messrs. Hancock & Adams at the Rev. Mr. Clark's; I told them my errand, and inquired for Mr. Daws; they said he had not been there; I related the story of the two officers, & supposed that He must have been stopped, as he ought to have been there before me. After I had been there about half an Hour, Mr. Daws came; after we refreshid our selves, we set off for Concord.

A powerful black horse gallops forcefully through space and occupies the center of the painting, a position that underscores its prominence in the story being told. Several figures surround the animal, gesturing and gesticulating in strained, dramatic fashion, while a fist brandishing what appears to be a musket reaches into the composition from the left. Mounted on the horse is the painting’s protagonist, the famous hero of the American Revolution Paul Revere, wrapped in a cloak as black as his steed. He is almost lost in the frenzied scene, suggesting his near invisibility under the cover of darkness.

While Lawrence’s Struggle series features new and different story lines that expand upon triumphalist national narratives in which heroic white men take center stage, the painter also embraced a few subjects that commonly turn up in traditional, even folkloric accounts of American history. This panel re-creates Revere’s legendary nighttime ride across the Massachusetts countryside to warn residents of encroaching British forces. Unlike Grant Wood’s graceful, aerial, and panoramic The Midnight Ride of Paul Revere (1931), Lawrence’s painting emphasizes the sheer physical force of bodies and movement. While Wood based his interpretation on the popular, and historically inaccurate, 1860 poem by Henry Wadsworth Longfellow, Lawrence responded to Revere’s account of the ride. Focused intently on the horse, Lawrence’s panel hinges on Revere’s recollection of his dramatic arrival via boat in Charlestown, where fellow Sons of Liberty provided him with a horse and from which he launched his legendary ride.