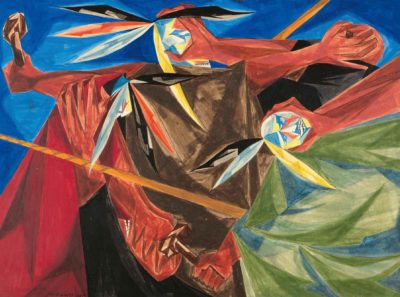 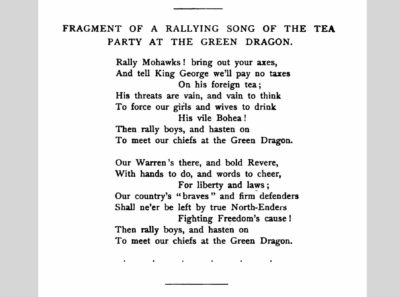 Page from “Rallying Son of the Tea Party at the Green Dragon” in Francis Samuel Drake, Tea Leaves: Being A Collection of Letters and Documents (Boston: A. O. Crane, 1884) 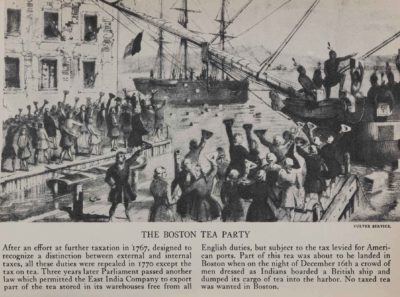 This painting’s caption comes from the first verse of a protest song sung by the Sons of Liberty, a secret organization fighting British taxation of the colonies. On the night of December 16, 1773, the colonists, disguised as members of the Mohawk Nation, boarded British ships to dump their cargo of tea into the Boston Harbor. Their revolutionary act quickly became known as the Boston Tea Party. Though no fighting actually took place, Lawrence recasts the charade as a violent combat of arms, fists, and axes between masked and unmasked figures.

A verse of the tea party’s rallying song follows:

Rally Mohawks! bring out your axes,
And tell King George we'll pay no taxes
On his foreign tea;
His threats are vain, and vain to think
To force our girls and wives to drink
His vile Bohea!
Then rally boys, and hasten on
To meet our chiefs at the Green Dragon.

In Lawrence’s Time:
To create Panel 3, Lawrence likely adapted imagery found in a popular history books of his time, including Secret History of the American Revolution (1941) and The Story of America in Pictures (1953) These books would have been available at the library in Harlem where he conducted research for the Struggle series.

Three “Mohawks” tangle with two guards in a melee of brawny arms, painted faces, multicolored feathers, and cubist-inflected blankets. Lawrence’s vision of the 1773 Boston Tea Party captures a desperate hand-to-hand struggle that likely never took place, for the guards on the tea ships quickly capitulated to the Boston men in rudimentary disguises of lampblack and blankets.

performative play, and the deadly business of claiming for themselves an aboriginal identity tied to the continent. Revolutions might well require the satirical mocking of those in power. Indians provided colonists with the means, and the Boston Tea Party offered a crystalizing moment, at once riot, protest, inside joke, and — as Lawrence has it — a masquerade with feathers and face paint.

Writing about Struggle, Lawrence noted his shift from an African American–centered history to a more pluralistic one, amenable to immigrant stories and national narratives. But with Rally Mohawks! he took the deadly colonial joke on its face, foreclosing an alternative vision. That was 1954. I wonder about the questions Lawrence might ask today: How could Black America better situate Indigenous people in the relation between Afrocentrism and the dream of American pluralism? How might Indian America understand its own legacies of slavery and antiblackness? Placed in dialogue, might the two have something new to say to immigrant America, offering a different vision of the struggle to build a humane and democratic nation?