Old America seems to be breaking up and moving Westward . . .
—an English immigrant, 1817 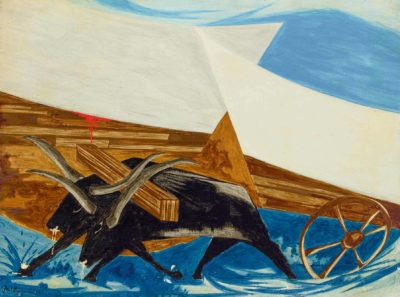 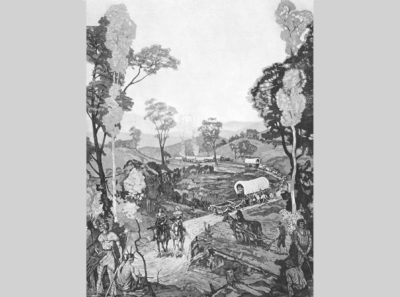 Painting by W.C. Grauer illustrated in Charles A. Beard and Mary R. Beard, A Basic History of the United States, Doubleday, Doran & Company, 1944

Lawrence’s final Struggle panel takes its subject from a pamphlet written and published by Morris Birkbeck, an English-born Quaker and abolitionist to advertise to his British compatriots accounts from the trail that the promised a fresh start in the American West. In this painting, Lawrence filled the picture plane with the continuous, unrelenting forward movement of covered wagons hauled by oxen over uneven terrain. A conspicuous splash of blood serves as a reminder of those who have sacrificed and died for a new life of freedom. Here Lawrence invites us to pursue the promise of American democracy and to continue to imagine what it means to be on this symbolic wagon and to take up the reins of the struggle.

Lawrence aptly chose the bodies of two oxen — creatures that toil — mired in the mud and muck, harnessed to a flattened white monolith of a covered wagon, weighted with all our earthly holdings. It’s a dirty job, this American journey. Lawrence’s homage to our American quest to become something more, new, and better is a planar composition in which the movement is forward, with all points in focus. The wooden yoke is a rigid oblique bridge that references depth and a constraint that both binds the beasts and serves as our mythic instrument of deliverance. As in his Builders series, Lawrence employs a primary palette to create a drama in which a heroic act is born from the mundane. Who are we who struggle to transform ourselves from beasts to angels in this agitation of perversity? The muscularity of the effort from the sinews that chafe under the yoke is powered by a desire to rise above the state of meager survival. And even that will not make us perfect. It is 1956, a mere decade out of World War II, and not yet a century out of slavery; the westward journey has long since ended. Native populations are decimated under its spokes. Old America, as Birkbeck foretold, has broken up.

We face each other, no longer master and slave, but still yoked with feet rooted in blood-soaked soil where forging an identity, minted in freedom, remains the clarion call.

The struggle becomes the journey and it casts a long, godforsaken shadow between us.

Brianna Santiago Responds:
Brianna Santiago is a sophomore at Boston Community Leadership Academy. She lives in Dorchester, MA. What matters to her most is family, respect, independence, and success. For one, family will always be there for you. Respect is something she values because in order to be somebody, you have to earn respect. Lastly, everyone should have their own independence in life, and you don’t get anywhere if you’re following others around or having them follow you. In her spare time she likes to draw, dance, and sing with her sister.

Jacob Lawrence tells the story of the African American journey through the art of painting. He created this thirty-panel series in which each work tells a different story but is connected to the struggles many encounter in life. Lawrence himself faced major struggles, from being in foster care because of the divorce of his parents to dropping out of school at sixteen to work. But through it all, he never stopped painting, no matter the obstacles he faced, and I admire him so much for that. Brianna Santiago (Boston Community Leadership Academy) The Struggle of Immigration Response to panel 30, Old America seems to be breaking up and moving Westward . . . —An English immigrant, 1817 Chapter Two: Struggle to Belong 41 To this day, immigrants from all over the world come to America searching for happiness, safety, job opportunities, and to join their families. I understand their motivations—finding ways to provide for their families and working hard to prove they are worth something. It is important that their stories are being read in books and newspapers and studied in school so that immigrants and their children know that they are not alone.

As the granddaughter of immigrants from Puerto Rico, I am able to relate to panel 30 the most. I find it important to learn about the journey my grandparents took and the challenges they faced.

I also feel connected to our homeland and the family we still have there. In 2017, Hurricane Maria damaged the island and left it without electricity, cutting off all communication to families and loved ones. I remembered being so scared because we went weeks without hearing from aunts, uncles, and cousins who were stranded. Not knowing if they were okay or if they were hurt frightened me beyond words. In panel 30, two oxen cross a river while pulling a wagon, showing how immigrants traveled by foot to reach their destination. The oxen carried all of their supplies and belongings. Sometimes, if people were sick or injured, they were allowed to sit on the wagon, which only added more weight for the oxen to pull. The journey itself caused pain and exhaustion to both the people and the oxen, but no matter how much suffering they felt, they kept on moving, using all the strength they had. To me, this painting shows immigrants fighting through pain, sadness, stress, and challenges, knowing that soon enough they would be in a better place with their family. I feel sad knowing that many immigrants died on long journeys looking for a place where they could live safely, but I also imagine the joy they felt when they crossed the border into their future.

To this day, immigrants from all over the world come to America searching for happiness, safety, job opportunities, and to join their families. I understand their motivations—finding ways to provide for their families and working hard to prove they are worth something. It is important that their stories are being read in books and newspapers and studied in school so that immigrants and their children know that they are not alone.