. . . is life so dear or peace so sweet as to be purchased at the price of chains and slavery? 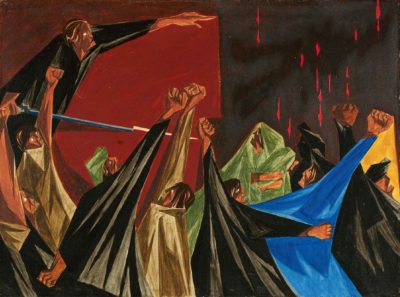 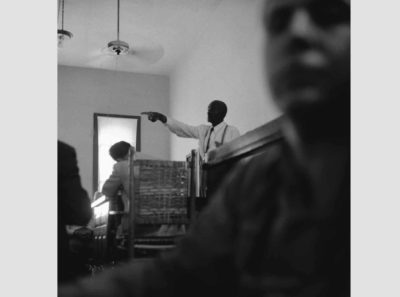 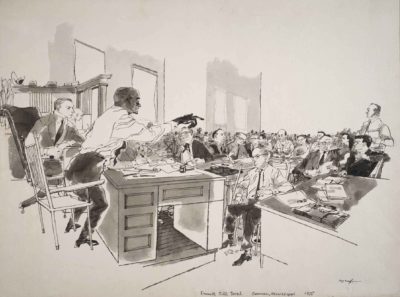 The Struggle series began with this painting when it was first exhibited in December 1956. For its title caption, Lawrence selected the closing line of a speech given by attorney and orator Patrick Henry to the second Virginia Convention in Richmond, Virginia, on March 23, 1775. Henry’s defense of American colonists’ freedom galvanized the patriots to demand liberty from the British. Lawrence pictured a man, perhaps Henry, pointing forward beyond a rallying crowd. The man clutches a rifle which directs the eye toward three raised fists, including one which blocks a woman and child from the tip of the gun’s spear. Faces of all tonalities with clear eyes directed upward maintain attentive focus amid the chaotic scene of angles and wedges flowing across the composition.

In Lawrence’s Time:
Amid the scorching headlines about the violent murder of Emmett Till in August 1955, his widely attended funeral, and the subsequent trial, a new protagonist in the fight for human freedom and dignity arose. On September 19, 1955, Till’s uncle, Mose Wright, courageously stood up in court to identify the men who came to his home on the night of August 28, 1955, to abduct the boy. Wright pointed his finger at Roy Bryant and John W. Milan and answered the judge, “There they are.” Newspaper photographer Ernest Withers captured the moment in this photo. This ink and wash illustration shows another view from the courtroom.

There is an uncanny similarity between the pointing gesture in these initially unpublished images and in Lawrence’s portrayal of attorney and speechwriter Patrick Henry proclaiming liberty.

Steve Locke Responds:
Steve Locke is a New York–based visual artist with a practice rooted in portraiture, language, and the discursive nature of power. He is a professor at the Pratt Institute. Follow @ svlocke on instagram.

This is how we begin — in ocher and black, against a field of luminous red as though we are illuminated by fire. We begin in the heat — the kind exacerbated by the presence of something cool. We begin with brown faces and raised fists and clear eyes. We begin in sharpness — in angles and wedges with slashes of light defining our shape and our movement.

A long brown hand makes a gesture for freedom. To my eyes, that hand belongs to Patrick Henry. His form echoes that of the lone blue figure in the painting, and the wedge of cool color creates a turbulence, pulls the eye around and through the spiral energy that composes the painting. The intersection of angles creates points of tension and release, like eddies. The fists are the crests of these waves, points of resolve.

Henry thrusts forward. His left hand clutches the top of a lectern, which continues down through the center of the picture and resolves itself to the point of the spear. Its path is interrupted by three raised fists, the last of which blocks a woman and child from the spear’s point. The triangle of three men recalls Jacques-Louis David’s 1784 The Oath of the Horatii, another painting about a call to arms and a pledge of honor (fig. 1).

This is how Lawrence wants us to begin as Americans: robe-wrapped, with brown hands making gestures for freedom.

Henry’s words in the panel’s title are not the obvious part of his speech, but in 1955 they were the most salient. In August of the same year, Emmett Till was lynched, and in December the Montgomery bus boycott began.