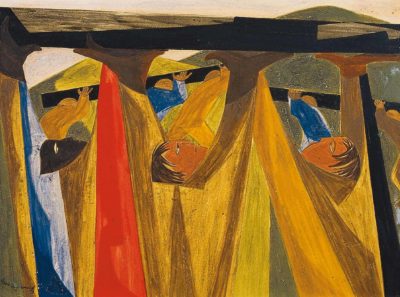 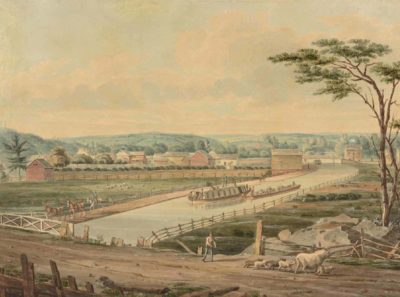 Who built America? Lawrence chose to credit and showcase the workers who built the Erie Canal across New York state from 1817–25. Three large figures shouldering a canal beam nearly fill the entire composition. Their procession creates a high and stark horizon line that cancels out the view of the sky above them. Lawrence utilized the weight of this line to emphasize the sheer physical power of those who labored under it while underscoring the human capital needed to construct the 363-mile canal system stretching from the Hudson River in Albany to the Niagara River in Buffalo and to fortify the country’s pathway to economic and social prosperity.

In Lawrence’s Time:
Images from one of Lawrence’s source books depicts the Erie Canal after it was built. Lawrence excerpted the panel’s title caption from this page, but painted a very different image. Not one of these illustrations focuses on the intensely collaborative efforts required of a diverse workforce to trench the land between the Atlantic Ocean and the Great Lakes region.

Elgin Cleckley Responds:
Elgin Cleckley is assistant professor of architecture and design thinking at the University of Virginia and principal of _mpathic design. Follow Elgin Cleckley @mpathicdesign on Instagram.

It is hard to imagine the human capital and sweat equity it took to create the Erie Canal. A deep gaze into Lawrence’s painting provides space to reflect on the beginning of construction, in the summer of 1817. Lawrence powerfully frames just a few of the thousands who constructed this engineering marvel in New York’s Mohawk Valley, enduring brutal temperatures.

One can almost hear the labored sounds emanating from the local farmers, freed black people, and Irish immigrants as they strain to hold support beams upright.

Lawrence shifts the color of each builder to suggest the individual, yet arms, hands, and structure meld together to symbolize the collaborative nature of the work. The faded clothing on the workers symbolically connotes wading through swamps, soot from smoke pots hung around one’s neck to ward off mosquitos, and earthen stains from digging with the most basic of tools.

Lawrence’s painting expresses the power of design. The American economist and political scientist Herbert A. Simon defines design as “[devising] courses of action aimed at changing existing situations into preferred ones.” This panel could serve as a visual introduction to understanding the courses of action that enabled the building of the Erie Canal: New York Governor DeWitt Clinton’s political influence, the innovative surveying of Benjamin Wright and James Geddes, Canvass White’s invention of underwater cement to bind stone, and Nathan Roberts’s revolutionary lock designs. Lawrence presents us with the changing that is underway, into the preferred— the Erie Canal we know today.