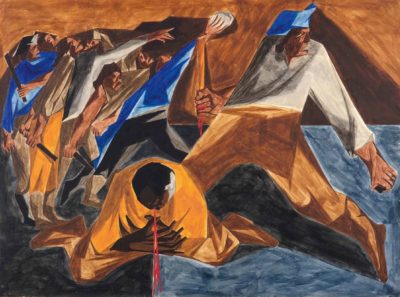 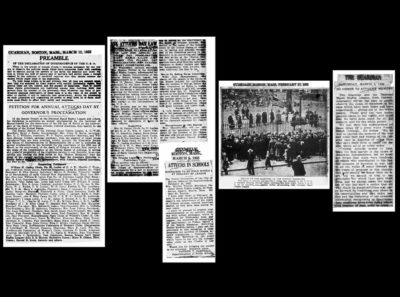 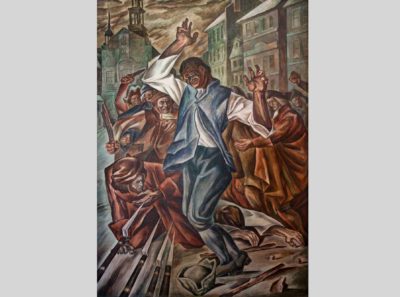 On the night of March 5, 1770 a squad of British soldiers occupying Boston opened fire on a crowd of colonists. In the painting, the rebellious crowd struggles in the dark chaos of the moment against the redcoats, who are unseen in the composition. Lawrence foregrounded Crispus Attucks, a man of African and Native descent who was the first to die in the conflict.

Attucks, who ran from slavery to join the cause to oust the British, is shown here crouching, gripping his chest, and spewing blood, beneath the sheltering arms of his comrades who continue to protest.

In Lawrence’s Time:
Citizen researchers read through press at the 135th Street Branch of the New York Public Library, now the Schomburg Center for Research in Black Culture, looking for articles relevant to black history and culture. The image above is of clipped articles from the 1930s from The Guardian, a black newspaper published in Boston. Lawrence used these files to center Attucks in the midst of revolt in Panel 2 and position him as the first martyr of the American Revolution.

Jacob Lawrence’s depiction of the Boston Massacre dramatically illustrates an early expression of colonists’ resentment about restrictions on their rights. Unfair taxation, impressment into the Royal Navy, and competition with off duty British soldiers for employment made for tense relations between the troopers and Boston residents. When local residents vented their frustrations toward the soldiers by throwing rocks and taunting them, gunfire erupted, killing five Americans. One of them was a fugitive from slavery, Crispus Attucks, who is seen bleeding in the forefront of the painting.

His sacrifice embodies the irony of life for African Americans throughout the history of the nation.

The protest Attucks joined spoke to the injustices imposed by England on him and others in the crowd. The image illustrates the tragic paradox of his perishing in the fight for greater freedom for the colonies while he was a fugitive from slavery. The freedom demanded by others in the group did not truly include him. Local practices imposed second-class citizenship on both free and enslaved African Americans; one of these customs required the burial of African Americans in segregated cemeteries. It was only because Boston officials overlooked local convention that Attucks was buried with the others killed that day. But the freedom for which he forfeited his life continued to elude his people. His sacrifice had to be followed by the sacrifices of many more before African Americans would get greater access to the citizenship demands that provoked the Boston Massacre.