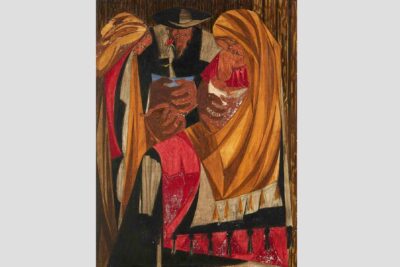 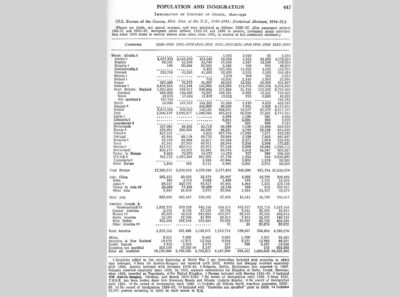 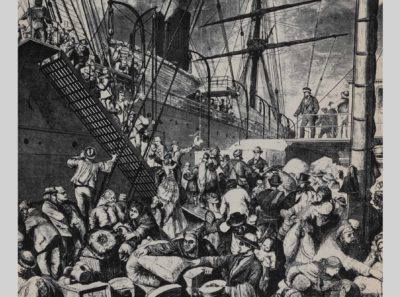 Newly discovered! This painting was previously known to scholars only through a black and white image and was recently located in a private art collection.

A table of immigration statistics published in Richard B. Morris’s Encyclopedia of American History (1953), one of Lawrence’s sources for the Struggle series, inspired this painting. Seeing the work in full color, it’s clear that Lawrence infused this composition with symbols of hope and new life. We can see how two of the three figures wear brightly hued robes. The woman draped in golden yellow looks down as she nurses the infant swaddled in her arms. Prior to viewing the painting, scholars believed the middle figure in black might hold a prayer book. Now we know he clutches a single potted red rose, the national flower of the United States.

Looking closely, you can see that certain colors on this painting are chipping. Conservators and researchers believe that Lawrence received tubes of defective red and brown paint in 1956. The painting was treated by experts so it could safely tour with the exhibition.

Kevin Jennings Responds:
Formerly the president of the Tenement Museum, Kevin Jennings is the chief executive officer of Lambda Legal.

America tells itself a highly romanticized story about immigration that goes something like this: downtrodden people leave some sort of hellhole in the Old Country for the promised land of the New World, where they struggle (briefly and successfully) before achieving a much more fabulous life in the US of A.

Were that it was so simple.

Jacob Lawrence wasn’t falling for it.

Here, Lawrence gives us imagery that emphasizes the struggle part of the immigrant experience. Far from triumphant in tone, this panel is somber, almost sorrowful. It depicts immigrants not as fresh-faced neophytes but as weathered and almost world-weary folk. For me, the prominence of the hands is the painting’s dominant motif. These are hands that have known hard work, hands that have toiled, hands that have seen much hard living. But they are also hands that are reaching out for a new life, for opportunity, for the promise that is America. Lawrence didn’t buy into the “streets of gold” mythology, but he did recognize the eternal quest for a better life that has always drawn — and continues to draw — the immigrant to our shores. The hands almost seem to be reaching out to clasp on to ours, begging the question in this era when so many are calling for the closure of our borders: Are we willing to clasp hands with those whose struggle has drawn them to our shores today?