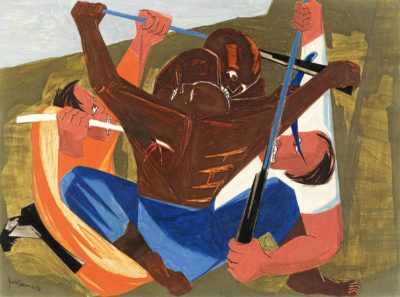 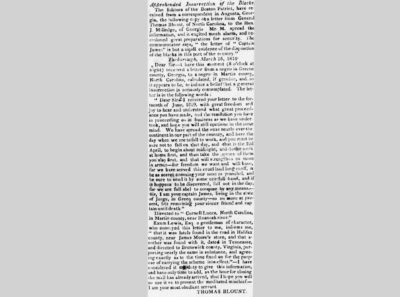 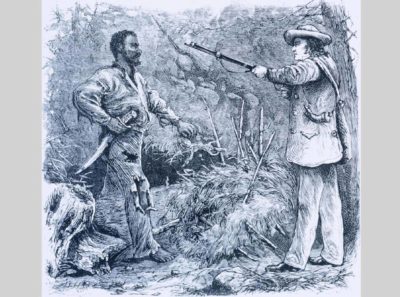 This painting symbolically represents the suppressed revolt planned by Captain James to liberate the enslaved communities between Greene County Georgia and Halifax County, North Carolina, in April 1810. Its title caption comes from a captured letter written by James expressing his unrelenting desire to overthrow bondage and strike out for freedom.

The letter read: for freedom we want and will have, for we have served this cruel land long enuff, and be as secret conveying your news as possible, and be sure to send it by some careful hand, and if it happens to be discovered, fail not in the day, for we are full able to conquer by any means – sir, I am your Captain James, living in the state of Georgia in Greene County.

James’s emotion is mirrored in Lawrence’s painting, which shows the muscular back of a very strong black man reaching up to hold two armed white captors at bay. The life and death struggle embodied in this brutal fight for liberation ruptures the national peace.

In Lawrence’s Time:
Lawrence found the reference to this letter by Captain James, an enslaved man in Georgia, in Herbert Aptheker’s book American Negro Slave Revolts (1936). The letter was part of an exchange outlining logistics for a revolt planned for midnight on April 22, 1810, to liberate enslaved populations between Halifax County, North Carolina, and Greene County, Georgia. While discovery of the missive stopped the plan, it was published in the New-York Evening Post a week later.

Erich Kessel Responds:
Erich Kessel is a doctoral student in the History of Art and African American Studies program at Yale University.

At first glance, this panel seems to depict a single moment in time: the violent suppression of a North Carolina slave revolt from 1810. Two wounded, enslaved Black people struggle against two white men; the blade piercing the front figure’s left back signals the violence of the conflict at hand. But because the painting memorializes the event of this violent suppression, it is simultaneously haunted by the possibility of resistance that the depicted white men seek to extinguish. The painting subtly includes a time that remains delayed and out of view, the moment that might have resulted in freedom from the plantation. In this way,

Lawrence’s painting is unique: just as it refers us to a particular historical moment, it also leaves open the imagining of an alternate future,

one that manifests the acquisition of the “freedom we . . . will have.”

The painting’s temporal ambiguity reads in the current moment as a series of questions. Did the freedom the figures were killed for ever become manifest? Were the racial violence of slavery and the plantation’s material and affective legacy ever abolished? Has the pain Lawrence so effectively depicts ceased to resonate? What some critics have called “the afterlife of slavery” puts an affirmative answer to these questions into doubt. If the present bears slavery’s mark through its material, legal, and affective structures (evidenced in imprisonment and police brutality, to name two examples), then the abolition the painting imagines remains an unfinished project.

When I met Jacob Lawrence in the mid1970s, our country still smoldering from the civil rights struggle, he was already an elder artist-statesman who was at times criticized for not being openly strident enough in his political views. When asked about this, he replied, “Everything I have to say is in my paintings.”

And he was indeed a master storyteller, a bellwether, fluent, sublime. This series is his truth, evidenced;

it magnifies an epic through line that contemplates the question: When have we not been in struggle?

Swords crossed, knives drawn, lives on the line; the deeply jewel-rich but somber palette matches the gravity of the event. The American Revolution is the genesis, but it also becomes the human struggle made universal. Lawrence was already a master in 1954, and his exquisite compositions and controlled use of color anchor the work in concert with the diagonal underpinnings that create high-pitched emotion. Muskets and knives crisscross to move the eye around the picture plane, in time to the battle’s drumbeat. These tightly composed dramas are stage front, set in shallow landscapes. Hear the thud as metal strikes flesh and bone; feel the desperation of bodies locked in combat. In Lawrence’s hands, would-be journalism is transformed to reveal the frailty of our dreams. “For freedom we want and will have,” he quotes in panel 27, as he ties and unties the knot of our longing. He delivers each brushstroke saturated in the pigment of tender beauty and wounded hope.