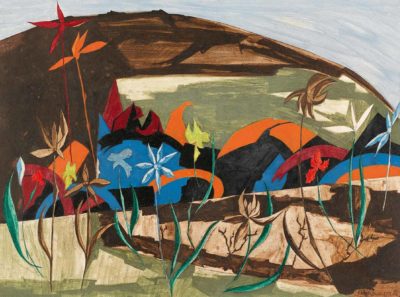 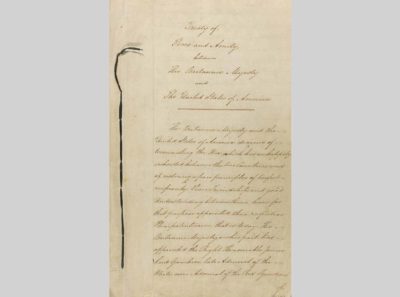 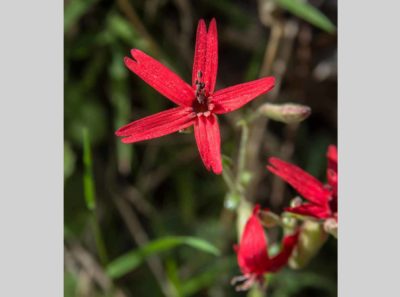 While General Andrew Jackson’s Battle of New Orleans victory culminated years of warring, Lawrence symbolized the American cessation as feeble yet persistent flowers sprouting from the cracked earth. The nation was starting over again. The three flora species depicted are native to the American South.

Rather than expressing an emphatic declaration of peace, Lawrence’s scorched and ruptured landscape, which opens to reveal a more fecund one, seems to cry out for solace. This plaintive sensibility is buttressed by the work’s secondary title, Ghent, a reference to the Treaty of Ghent, which ended the demoralizing War of 1812 and concretized American self-determination and Manifest Destiny. Perhaps I am projecting, since I write just one week after the anniversary of the Charlottesville, Virginia, “summer of hate,” when the city’s racial fissure was laid bare for the globe to see. One month before this anniversary, I and a hundred other passengers of varied age, race, and economic background embarked on a pilgrimage to transport to Montgomery, Alabama, soil recovered in Charlottesville from the site of the horrific lynching murder of a black man, John Henry James, in 1898. Along the nearly seven hundred miles traveled, we stopped at sites of America’s most violent racial interactions with the hope of comprehending Charlottesville’s place in this ugly narrative. Upon arriving in Montgomery, I suffered the same emotional despair articulated by Lawrence’s faceted and sharply angular landscape.

In 1956, when the work was created, the Montgomery bus boycott was in full swing with escalating violence that included the bombing of Martin Luther King Jr.’s home. American identity was fracturing along lines of its most basic civil rights and the protest’s end was still an entire year away.

Yet there is hope in Lawrence’s canvas. His emaciated flowers strain upward toward a nourishing sky to suggest that peace, which today seems so elusive, is indeed attainable and fulfilling.