I cannot speak sufficiently in praise of the firmness and deliberation with which my whole line received their approach . . .
—Andrew Jackson, New Orleans, 1815 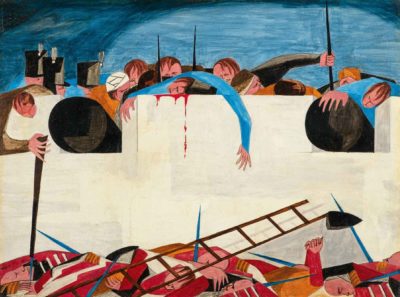 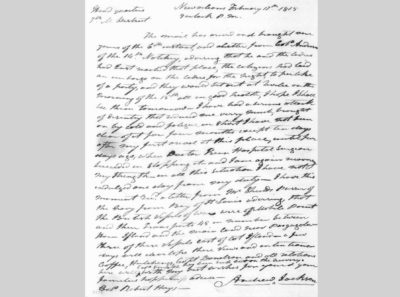 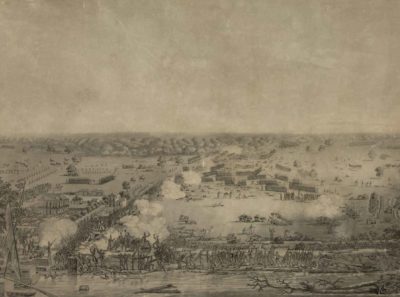 Against concentrations of red, white, and blue paint, Lawrence laid out the aftermath of General Andrew Jackson’s remarkable defeat of the British on January 8, 1915, at the Battle of New Orleans in Louisiana. Jackson credited the resounding victory to the valiant participation of Kentuckians, Creole people, immigrants, and enslaved men who all fought together behind the safety of Line Jackson. The seven-foot-high-wall built by enslaved men out of logs, earth, and cotton bales stretched nearly a mile and protected nearly all the fighters. Lawrence showed us the survivors who lean over to peer at the redcoats they defeated so convincingly.

Plantation fields were turned into a battlefield where enslaved men built Line Jackson, a seven-foot-high wall, to hold back the invasion of the English “redcoats” by the American “dirty shirts” during the Battle of New Orleans. It is now the site of a national park, sandwiched between an oil refinery and one of the world’s largest sugar refineries, a place where the Fazendenville community, founded by emancipated Blacks, once sat in the Native American territories known as Balbancha. In this panel, alternately titled Battle after Peace, Lawrence used Major General Andrew Jackson’s line to illustrate the unpredictable contrast of victory in the face of ever looming uncertainties.

Truth is, the Battle of New Orleans was won because of a diverse wall of defense where unexpected allies and unrecognized heroes — Native Americans, pirates, immigrants, Creoles, free people of color, enslaved Black people, Kentucky militiamen, and other Americans — collaborated to change the course of history.

Lawrence’s depiction of Jackson’s line exposes the engineering and ingenuity of a historical moment; however, similar protection strategies can be witnessed across southern Louisiana’s twenty-first-century landscape as twenty-plus-foot levee walls have been constructed to reduce the risks of rising seas, rapid land loss, raging storm surges, and the Mississippi River. The enemy is not a foreign country with thousands of troops invading our shores, but rather the long-lasting side effects of colonial conquest and a changing climate induced by extractive economics. Unfortunately, the battle after peace has yet to be won. After winning the Battle of New Orleans, Andrew Jackson wrote of the skill and valor of his ad hoc army. Jackson’s diverse militia held off the British approach, but their triumph was largely in vain. Just weeks prior, the United States and the United Kingdom had signed the Treaty of Ghent to end the war and the news had not yet reached America.

Alyse Gaskins Responds:
Alyse Gaskins was born in Norfolk, VA, and raised in Fremont, NC. A sixteen-year-old junior at Thurgood Marshall Academy, she lives in the Fairlawn section of Southeast Washington, DC. She is an honor roll student that enjoys English and Science. Outside of school, she enjoys photography and writing poetry. She plans to attend college and pursue her dream of becoming a professional photographer.

The Battle of New Orleans, the last conflict of the War of 1812, took place on January 8, 1815. The Americans were outnumbered by the British, but still were victorious, leaving the enemy troops running with blood, lined up against their fallen ladder. The war had officially ended on December 24, 1814, when the United States and the United Kingdom signed the Treaty of Ghent, but unfortunately the news had not yet reached America. The war was vicious; both sides fought hard for victory and praise. War is what makes the world so bad. I feel that war is not really needed to prove a point. War creates a lot of unnecessary economic problems. It can lead to displacement of citizens and posttraumatic stress disorder and other mental illnesses.

Panel 25 evokes many emotions for me; it makes me feel many things. Damaged souls and broken bones hurt both physically and mentally. Bloodstains, slaughtered beings. The deadly aftermath hits deep for just about everyone.

Aggression is never a good way to solve conflict, and it does nothing but create more conflict. Looking at this painting, I think of only sadness, pain, and hurt. Simple conversation, communication, or negotiation, instead of violence, could help resolve differences. The painting shows the complex aftermath of the war and how deadly it was, and how the world was back then and how it still is. In the United States, we have always dealt with war against other countries, and it’s crazy how this problem is still present. Victory isn’t really victory if you’re taking lives. War is completely uncalled for, and this painting defines the true hurt and turmoil it can cause among people.