Of the Senate House, the President's Palace, the barracks, the dockyard . . . nothing could be seen except heaps of smoking ruins . . .
—a British officer at Washington, 1814 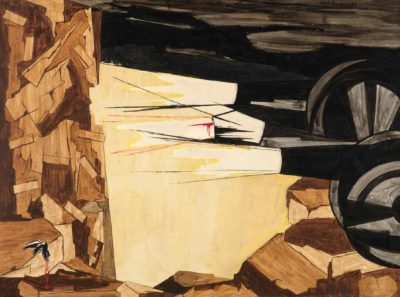 A report written by British military officer George Robert Gleig vividly described the total destruction of the American capital by the British during their invasion. Lawrence imagined the two counter-perspectives of this night as a dark trap—a narrow space bounded and lit by firing cannons on one side and by a massive wall of rubble on the other. The only natural element in the painting is the mortally wounded body of a small black and white bird symbolizing the predicament of Washington’s civilian population trapped within the city.

Lawrence’s stark yet explosive composition recasts this battle — resulting in one of the most devastating losses sustained by the United States during the War of 1812 — to signal the shock of invasion. A vivid burst of cannon fire breaks through the clouded horizon and a wounded black bird lies among the rubble. Small red streaks emanating from the central cannon and blood trickling from the fallen bird punctuate the otherwise neutral tones of black, white, and brown that dominate the image. By merging the fiery moment of attack with the ruins of its aftermath, Lawrence underscores the disparity between the vantage point of the victorious British officer, quoted in the title, and the plight of the helpless civilians — here unseen — who perished during the siege.

The palette and symbolism of the present work, with its contrasting tones and sharp angles, seem to enact the very explosions they depict.

In 1956 Lawrence’s abstracted representation of the attack on the seat of American leadership echoed the shocking portrayal of such violence in the media of the time, including the bombing of the home of Martin Luther King Jr. that same year.

Decades later, upon reflection, Lawrence would speak of the tension “in art where we have opposite colors” and how both “can represent growth and development.” Such sentiments might apply to the Americans, black and white alike, who advocated for integration and civil rights in the face of violent resistance.

Lynsey Borges Responds:
Lynsey Borges is in the tenth grade at Boston Community Leadership Academy. She lives with her mother and grandmother. What matters to her most in this world is being successful and making her mother proud, because she wants to give back to her for raising her to the best of her abilities and for doing everything for her. In her spare time she likes to listen to music and binge watch TV shows.

This painting reveals an intricate war scene with cannons being shot, but Jacob Lawrence chooses to focus on a dead bird. To me, the painting depicts the chaos of war and how anything can be affected by death. Seeing his representation of death, I feel a sense of compassion because I understand why he chose the bird as the symbol of a bigger picture. Panel 24 relates to the world now because far too often we see violence around us. We see people in our community fighting against each other in gangs, just like in the war Lawrence depicts.

I often hear gun violence right outside my window, people shooting at each other. It makes me feel that as a society, we are failing each other. Yet at the same time, it helps me to stay focused on my goals even more.

Looking at the painting, I realize that seemingly insignificant things can represent a bigger picture. I also wonder about Lawrence’s thought process and what his opinions would be on major issues from the past as they relate to problems in today’s world. He drew a dead bird, and to me, the bird represents a deceased soldier, which reminds me of all those who have fought and died for their countries. In the end, death is a symbolic representation of chaos and the tragic outcome of war.