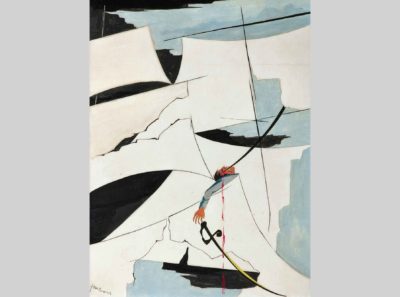 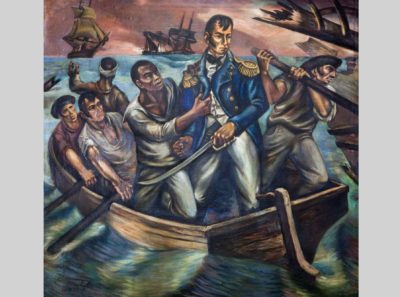 The inscription on the back of this painting identifies its subject as the landmark American naval victory over the British on September 10, 1813, at the Battle of Lake Erie in Ohio. However, the image depicts a scene of utter desolation where a lone American seaman stranded amidst billows of torn sails lays dying. A sword has pierced his eye and blood falls like teardrops while his own weapon slips from his unclenched hand. The clue to this painting’s true meaning may be found in its title caption which is excerpted from a speech Senator Henry Clay delivered to Congress to request continued funding for the War with Britain which was going into its second year of fighting. From this text, Lawrence imagined the consequences Clay warned of: the entire nation is threatened when it abandons the common struggle to protect people from their oppressors.

In Lawrence’s Time:
This 1943 mural of black sailor Cyrus Tiffany and Commander Oliver Hazard Perry by Martyl Schweig Langsdorf visualizes the contributions of black people in America’s early wars as public art. Tiffany served as a sailor in the Battle of Lake Erie and he was in charge of Perry’s multiracial crew. In his painting, Lawrence diverged from the convention of picturing Tiffany heroically shielding Perry as they transferred vessels in the midst of battle.

Nestled within what reads as the ripped sails of a battleship, a man lies dying. Lawrence asks us to sit with the man in this moment. As we study him, we become acutely aware of his pained facial expression after a sword has pierced his eye; we bear witness to the blood that falls like teardrops and watch as his own sword slips from his unclenched hand. Lawrence invites us into this scene, lets us feel the precarity of the man’s state of being, and holds us there.

There. On the back of this panel, Lawrence lightly inscribed “. . . Lake Erie — 1813” in red cursive handwriting. This inscription complements the panel’s title, which is a revised version of Henry Clay’s speech on seamen’s rights. The words of Lawrence’s revision linger. He begins with “if.” By invoking this if, he pulls us in with a preparation for failure. Within this if there is also hope. Lawrence’s title concludes with a provocation that if failure were to occur, “let us . . . expire together in one common struggle.” Is death the failure that Lawrence refers to?

Or is it the inability to come together as one? Ellipses immediately precede and follow the panel’s title. These might be Lawrence’s way of leaving the past open to revision while underscoring the possibilities the future brings. Lawrence adopts this approach in the Struggle series and offers it to future generations.

Amber Cruz Responds:
Amber Cruz was born in New York and raised in the Bronx with her parents and two older siblings. Her hobbies include creating art in almost any medium, reading, learning, traveling, and visiting museums. She will attend New York University in Fall 2019 as a freshman with plans to double major in studio art and art history and wants to work as a curator.

When looking at the Struggle series, I was overwhelmed by how many bold colors demanded my complete attention as they moved in sharp lines across the paintings. This is likely why my eyes settled on the piece I have decided to discuss. The white, gray, and deep navy blue that make up the majority of panel 23 soothed my eyes. The quotation used in the title intrigued me as well.

I remember reading those words in my eleventh-grade AP United States history class when we studied the War of 1812. I remember learning about how much Americans did not like “Mr. Madison’s War,” and that Henry Clay was among those few who were excited, the War Hawks. With this quotation in mind, the fairly abstract image I saw began to make more sense to me. The jagged lines cutting into smoothed, curved white boxes were torn sails; the soft rounded gray masses were clouds; and the deep navy that reminded me of my uniform pants was a dark stormy sky.

I did not even need to look at the central figure to see that this was a painting showing loss, more specifically American loss,

which seems to be either glorified so as not to focus on horror or forgotten in order to prevent shame. The central figure is still powerful, a man, probably a sailor, an American, stabbed in the eye by an invisible assailant, and dropping his sword, the weapon with which he probably fought for his freedom until his dying breath.

I wonder if that is what Lawrence was showing in the image. How, much as the sailor in his painting, people of color will always fight for their freedoms as humans and Americans until their last breath. That is my own personal take, which is difficult not to have when growing up in today’s twenty-four-hour news cycle. Most of what I hear concerns people having their rights, freedoms, and even lives taken from them. All because someone thought they did not deserve these human rights, as they did not share the same race, ethnicity, sexuality, gender, religion, education, class, physical ability, mental ability, or some combination. If there were a box next to each term listed, I would check about half the boxes. I am lucky to live where I live, though, where the diverse crowd allows anyone to feel welcome. There are those who are not so lucky, and I think about them, in places not nearly as welcoming. Still, they rise. In protests, rallies, and parades, they rise to proudly say they exist, they deserve to exist, and they deserve their rights, and they join hands to say they will fight for their beliefs until their last breath.