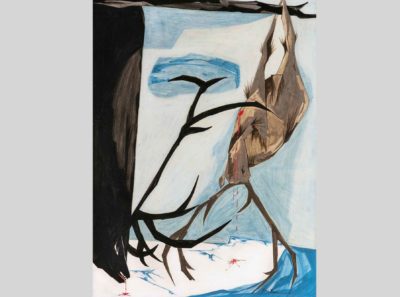 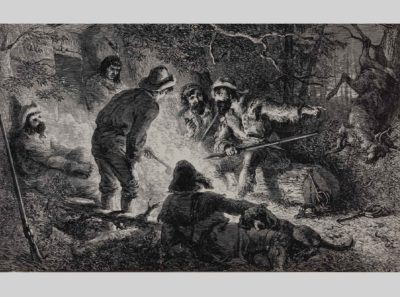 The forceful shapes of two freshly killed Rocky Mountain elk dominate this composition. Their antlers—often used for fighting—contrast sharply against the blue and white snow of the foreground, which Lawrence spotted with fresh red blood dripping from the animals. Around 1812, fur trapping and trading among Salish, Nez Perce, and Euro-American people in the Bitterroot Valley (in present-day Montana) intensified. Lawrence envisioned the strung up prey as an allegory for the land, material resources, and freedoms at stake in the War of 1812 and ultimately ensnared by the expansionist legacies of the conflict.

In 1805 Nez Perce guides parted with the Corps of Discovery just below Celilo Falls on the Columbia River, once one of the richest fisheries in the world. Above these falls are my people, the Nimíipuu, or Nez Perce. Some people say that ’iceyéeye (Coyote), working for the Creator, made a fish ladder on these very falls to aid the coming people. Nez Perce guides reunited with Lewis and Clark’s expedition the following spring on their eastbound return and guided them over the Bitterroot Mountains as far as present day East Missoula. The trek through the mountains was unbearably hard, especially without intimate knowledge of the seasonal conditions. In Lawrence’s Trappers, light blues and white engulf the hanging elk, emphasizing the deep, undefined expanse of snow that covers the steep Bitterroots most of the year. With the expertise and prowess of Nez Perce individuals, the Corps was guided safely on their second attempt over the mountains, trudging through several feet of snow at the end of June. Over time, the Nez Perce had created an important trade route over the Bitterroot Mountains, which was also used to go east to the plains to hunt buffalo. This is why we have another old name for ourselves: Tsoopnitpeloo, which means “The Walking-Out People,” coming from the mountains to the plains. When I was a child, this same eastbound route connected my grandparents’ home in Idaho to where I lived on the Missouri River, near another portage site for the expedition. Trappers, missionaries, miners, and others have since used our trails. As my family travels back and forth, we remain the people coming down from the mountains.