Listen, Father! The Americans have not yet defeated us by land; neither are we sure they have done so by water—we therefore wish to remain here and fight our enemy . . .
—Tecumseh to the British, Tippecanoe, 1811 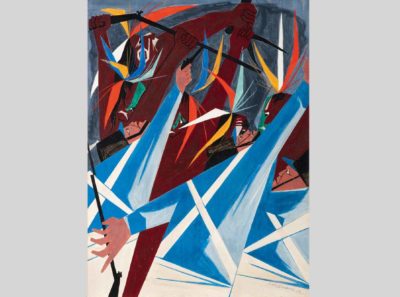 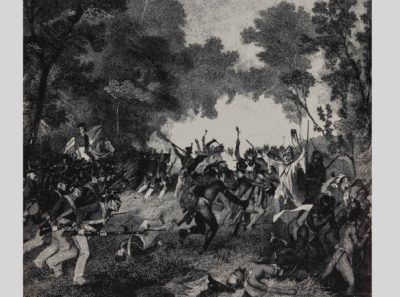 For this panel’s title Lawrence excerpted an 1813 speech by Shawnee Chief Tecumseh to British General Henry A. Proctor shortly before the Battle of the Thames in Canada. This decisive American victory in the War of 1812 precipitated the steady decline of Tecumseh’s confederation, but not his resolve to continue to fight the Americans for his lands. Lawrence’s painting vividly imagines a field composed entirely of crossed arms— some brightly uniformed and others brown and bare. The combination of image and text portrays this battle as one of displacement and a claim for Native lands from the perspective of those who refused defeat.

In Lawrence’s Time:
An engraving of a painting by Alonzo Chappel is in the pages of Lawrence’s 1953 source The Story of America in Pictures illustrating the Battle of Tippecanoe. It depicts a wide view of Tecumseh’s and American forces entrenched in battle while Lawrence’s imagery positions the viewer closer to the fight in which no one has yet fallen.

Kimberli Gant Responds:
Kimberli Gant is the McKinnon Curator of Modern and Contemporary Art at the Chrysler Museum of Art.

In this tightly compact scene, three American soldiers, indicated by their blue and white uniforms and top hats, converge on Shawnee Chief Tecumseh — seen with his warpaint — and his warriors. The actions are intense, with the combatants extending their guns and blades toward each other in a final battle for domination. The figures’ faces are aggressive, their bodies in motion for the fight of their lives.

Lawrence’s scene is a cliffhanger, a moment of incredible suspense, in which the viewer does not know the outcome.

He leaves us anxious for the next sequence: What will happen? Who will win?

Tecumseh was not victorious. The chief and approximately 450 Native fighters and British troops fought together against thousands of American soldiers. The majority of those warriors would be killed, including the legendary Tecumseh. Yet in Lawrence’s work, the ending has not been written. We can hope for a revision of history. One wonders if Lawrence painted this moment the way he did because he saw a connection between the genocide of the Native American peoples by white Americans and the atrocities of European colonialism on African communities. For in this moment Tecumseh’s battle has not been lost; the fight continues on, and anyone may taste victory.