In all your intercourse with the natives, treat them in the most friendly and conciliatory manner which their own conduct will admit…
—Jefferson to Lewis & Clark, 1803 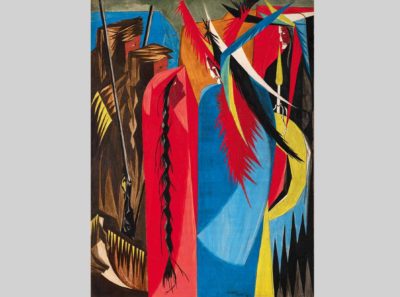 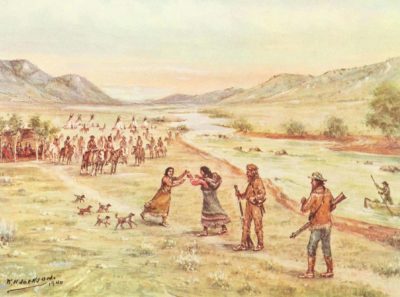 President Thomas Jefferson wrote a letter on January 18, 1803, giving instructions for the Corps of Discovery expedition led by Captain Meriwether Lewis and Second Lieutenant William Clark. He urged the two Americans to engage in respectful relations with the Native people they would meet throughout their journey. Lawrence chose to depict Lemhi Shoshone translator Sacajawea, robed in red, in a moment of her own discovery. Here she realizes she is standing face to face, eye to eye, with her brother Shoshone Chief Cameahwait, dressed in blue, and from whom she had long been separated and enslaved since childhood by a warring nation. Lawrence celebrated this tender reunion by forging a heart shape at the center of the composition.

In Lawrence’s Time:
The above illustration was published in one of Jacob Lawrence’s sources. The caption declares “Historic Homecoming,” which describes the reunion between Sacajawea and the Lemhi Shoshone people. However, the scene is romanticized as a landscape painting, emphasizing America’s westward expansion into Native-occupied land as an idealistic subject.

Leslie King Hammond Responds:
Leslie King Hammond is graduate dean emerita and founding director of the Center for Race and Culture at the Maryland Institute College of Art. She has curated and published extensively in the field of African American art and is the recipient of a Lifetime Achievement Award from the Studio Museum in Harlem.

The Louisiana Purchase by President Thomas Jefferson in 1803 was a monumental acquisition that nearly doubled the landmass of the United States. This unmapped territory was the homeland for millions of Indigenous people, and that same year Jefferson commissioned the Corps of Discovery, led by William Clark and Meriwether Lewis, to explore the new lands and document everything they witnessed and experienced. The expedition team packed special supplies as gifts for the Native people they would encounter, including pocket mirrors, sewing needles, silk ribbons, tobacco, tomahawks, bright colored cloth, glass beads, and vermilion face paint.

Lawrence loaded this panel with symbolic images carrying layered meanings of such encounters. On the left, Lewis and Clark hold rifles that fired without sparks or powder. On the right, two Native warriors wear spectacular red, blue, and black feather headdresses. Lawrence painted their faces in red and white, and only one spear is seen in comparison to the two rifles. The central figure is the unpaid guide, and the only woman in the party, Sacajawea. Her red garment is rendered with particular intensity, a powerful statement of her authority. She stands next to her brother, Chief Cameahwait, dressed in blue for wisdom and intuition. Sacajawea’s knowledge and intellect navigated this expedition through severe terrain and rough times.

The fraying long braid of Sacajawea, however, may signify that future relations between Indigenous people and new Americans would unravel over time, with disastrous results for Native populations.

Makenda Marc Responds:
Makenda Marc is a sophomore at Boston Community Leadership Academy. She lives with her parents and three brothers in Hyde Park. What matters to her most in this world is making her family proud because they are the most important thing to her. In her spare time, she likes to meditate and try to understand life.

In panel 18 of Jacob Lawrence’s Struggle series, Native people are assembled together wearing bright-colored clothing, representing a moment of joy and reunion. This painting describes the emotions and relief experienced when two loved ones, Sacajawea and her brother, Cameahwait, reunite with one another after a long absence.

I connect to this feeling of reuniting with family. When I lived in Haiti as a five-year-old, my father, who lived in America, came to visit my brother and me once a year, and every time he visited, a sense of joy filled my heart.

We caught up on so much and he gave many hugs and greetings to other family members. It was a celebration every time he visited, and each time he left, I felt empty and lonely. In a world where family members are getting separated from each other—whether by our immigration system or foster care system—getting to see our loved ones every day is precious. For those who cannot, it causes grief and sadness.