I shall hazard much and can possibly gain nothing by the issue of the interview . . .
—Hamilton before his duel with Burr, 1804 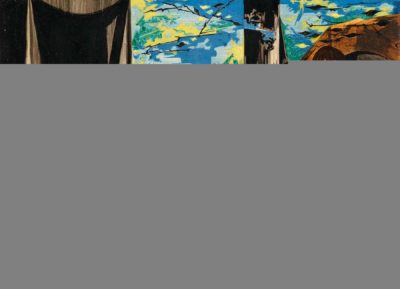 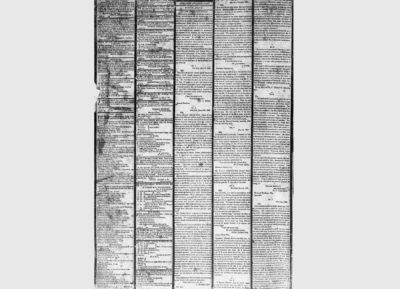 Alexander Hamilton, “Statement on Impending Duel with Aaron Burr” in Hamilton's Letter Prior to Duel, and Last Will & Testament, New-York Evening Post, July 16, 1804 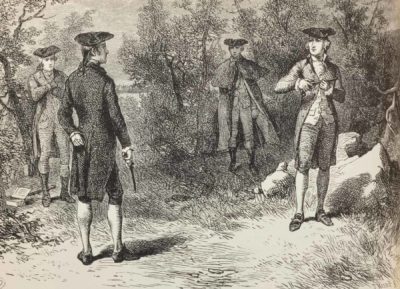 The letter written by American statesman Alexander Hamilton before his impending duel with his political rival Vice President Aaron Burr detailed the motivations and regrets for the encounter Lawrence reimagined. Burr’s shadow is in the center of the painting. He has just fired the fatal bullet with his extended arm, causing Hamilton’s bloody struggle against his needless death. The black and gray coloration of his clothing repeats in the tomb-like structure of cloaks hiding the “field of honor” on the cliffs below Weehawken, New Jersey, on the Hudson River. Hamilton’s black top hat rests next to the ominous shadow of his opponent. This stark palette and its associations with death also appear in the background where a symbolic tree of liberty has suffered a severed limb, a mortal gash, similar to the wound in Hamilton’s torso.

Sandy Alexandre Responds:
Sandy Alexandre is an associate professor in the Literature Department at the Massachusetts Institute of Technology. She is the author of The Properties of Violence: Claims to Ownership in Representations of Lynching.

Depicting the immediate aftermath of the Burr-Hamilton duel, this panel evokes the setting of Psalm 23:4 —“the valley of the shadow of death”— and the fearless tone of that iconic biblical passage. Lawrence zooms in on that proverbial shadow and is consequently able to riff on how Hamilton foreshadowed his own death. The ingenious efficiency of the painting lies in how we are able to access both the close-up presentness of the situation and a more expansive breadth of time through three interconnected images that associate Hamilton’s death with a past, present, and future.

Attention initially travels between the shadow on the ground, shaped like a caped person aiming a weapon at Hamilton, and Hamilton himself, who, stooped in agony, nurses a conspicuously bloody wound. Both the draping and the black/white tonality of his cape direct our eyes to the similarly painted tomblike structure directly in front of him, suggesting that the future literally facing him is death. The angle of his bowed head gestures toward the top hat lying on the tomb floor, and since the hat seems to complete his outfit, all signs point to his association with this burial place. To his right, the tree, traditionally associated with life and genealogy and whose roots we associate with the past, likewise becomes aligned with death via its black/white color scheme.

The zigzag course one follows to view this painting recalls how bullets rico-chet. One may even have hit the tree; like the wound in Hamilton’s torso, it, too, has a gash in its trunk. A founding father is dead.

Harry Osei-Bonsu Responds:
Harry Osei-Bonsu is an aspiring visual artist from the South Bronx who is originally from Ghana. He enjoys photography and drawing and occasionally makes art with film.

“Growth” is a loose term. People use the word to describe outcomes that are more favorable than those in the past, but who chooses what is favorable for a whole nation?

Of course, those in power. Growth is like our fingerprints—unique to every person. What is growth for one person may be the fall of everything another stands for. The question of who should have power in society and who should not have it has been asked continually in history. This same question has led to war, violence, and ultimately growth, at least from my perspective. Jacob Lawrence’s Struggle series resonates with my present because the paintings can be interpreted as a representation of universal human challenges. Although they are all great pieces of art, panel 17 struck me most.

On the left, Alexander Hamilton stands with his head bowed to the ground, clutching his fatal gunshot wound, while Aaron Burr stands hidden in the shadows; a plant protrudes from a crack in the ground. With this painting Lawrence opened a conversation about the struggle for power in American history. From the civil rights movement to the Stonewall riots, power has always been one of the main topics in our country’s discourse. Burr and Hamilton’s duel demonstrates just how important power is: Burr was willing to kill his rival and ultimately end his own political career because he opposed him. Hamilton even went so far as to risk his life so that Burr wouldn’t get into office, although even he, in his final will, acknowledged how senseless that was.

This was not the last time America would see such a battle. Other figures, such as Martin Luther King, Jr., and Marsha P. Johnson, would walk directly into danger to assert their power. Lawrence captured the continuity and nuance of this ongoing clash by depicting one of the most famous and early struggles for power in America. The only outlier in this painting, however, is the plant that grows out of the earth.

Why would Lawrence add a symbol of life and growth in a painting that is mainly about death and struggle?

In a painting, every single aspect and brushstroke is intentional, from size to color choice. The scene of Hamilton and Burr seems juxtaposed to the plants and trees in the background and foreground. This can be seen in the differing color choice; the men are very dark and intense, while the plants are lighter and calmer. It’s almost as if they were meant to attract more attention than Hamilton and Burr. Perhaps they were?

The struggle for power in America comes about through individual activism and protest, which influence movements and lead to change. Jacob Lawrence provides a means to look at America’s history critically, without considering race, ethnicity, or gender. The transfer of power in America has often occurred through violence and bloodshed; Lawrence’s choice of a duel to comment about this clash is both nuanced and necessary.