There are combustibles in every State, which a spark might set fire to.
—Washington, 26 December 1786 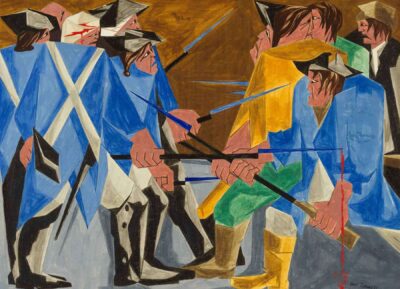 Jacob Lawrence, (American, 1917–2000). There are combustibles in every State, which a spark might set fire to. —Washington, 26 December 1786, Panel 16, 1956, from Struggle: From the History of the American People , 1954–56. Private Collection © The Jacob and Gwendolyn Knight Lawrence Foundation, Seattle/Artists Rights Society (ARS), New York. Photo by Anna-Marie Kellen. 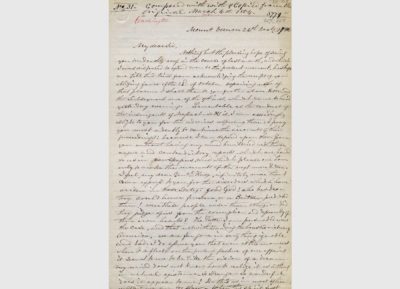 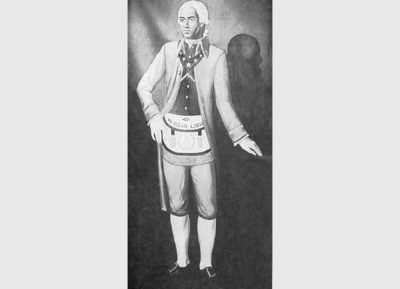 Artist in the United States, Portrait of Prince Hall, Grand Lodge of British Columbia and Yukon

Lawrence selected the words for this title caption from a letter written by retired General George Washington to Secretary of War Henry Knox, who was in charge of the federal armory in Springfield, Massachusetts. He expressed concern about mounting social and political unrest there and, less than a month later, in January 1787, Revolutionary War veteran Daniel Shay led a citizen’s army of more than a thousand farmers to attack the arsenal.

As Lawrence was beginning his Struggle series, the NAACP was preparing its landmark case against public school segregation in Brown v. Board of Education. Here, he chose a quote from 1786 that, in citing a rebellion by western Massachusetts farmers against land foreclosures, described the potentially revolutionary implications of a federal ruling against racial segregation in America’s public schools. Washington’s letter referred to Daniel Shays, who was then raising an army of farmers to attack the federal armory in Springfield. Therefore, the “combustibles in every State” were more real than metaphorical. Any number of tensions — racial, political, economic — smoldering just below the new nation’s surface could be the “spark.” Prince Hall, a black veteran and founder of the first African Lodge of Freemasons, represented one spark. In early 1787, after Shaysites seized the armory, Hall offered to raise an all-black militia to put down the rebellion. Yet this spark did not lead to a fire. Massachusetts Governor James Bowdoin refused the offer, and just a few months later, Hall sent a proposal of a very different kind to the legislature:

since the new nation refused to recognize their equality, black Bostonians requested financial support for voluntary repatriation to Africa.

As Lawrence researched Shays’s Rebellion, the potential spark of the Brown decision (1954) was literal. The fire would emerge in black citizens’ nonviolent direct action in the face of violent white resistance to public school desegregation. Lawrence’s alternate title for this panel —Discontent Within— was as applicable to the twentieth century black freedom struggle as to Hall’s demands for black male equality in the eighteenth.

Jada Epps Responds:
Jada Epps is a sixteen-year-old junior at Thurgood Marshall Academy in New York City. She enjoys being an activist and effecting change wherever she can. After high school, Jada plans on studying nursing in college and starting her own nonprofit organization for female empowerment. She enjoys eating Reese’s Cups while doing homework.

According to the Declaration of Independence, “Whenever any form of government becomes destructive of these ends, it is the right of the people to alter or to abolish it.” The War of Independence, they called it. But no one discussed what would happen afterwards. After bodies were filled with bullets, husbands and fathers gone forever, wives left to raise children on their own, they were “free.” No one warned about the aftermath. Families left impoverished. Veterans forever reminded of the fight that let them “free.” Taxes and penalties for a state that wanted them to no longer be controlled. Sound familiar? The fight for freedom.

My ancestors fought for their freedom with their scarred backs, blackened skin, and silent wounds that told stories of the unforgivable horrors they suffered.

The Civil War, they called it. Bloodshed, children and men. Never returning home. A fight for freedom, they called it. My black men, gunned down, treated like dogs, discarded like trash. A fight for equality, we call it. So when you ask, “How do you see struggle in this painting?” I see a corrupt government. A president holding people in camps. I see powerful people doing nothing to change our society. I don’t see freedom. I still see us FIGHTING.

Lawrence exhibition leads to discovery of a lost work