We, the people of the United States, in order to form a more perfect Union, establish justice, insure domestic tranquility . . .
—17 September 1787 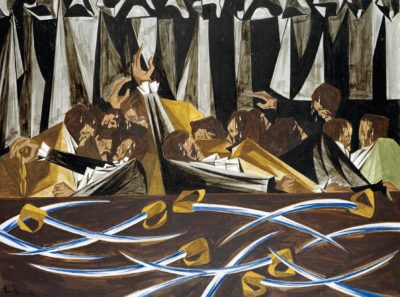 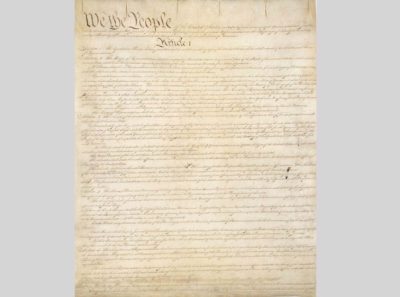 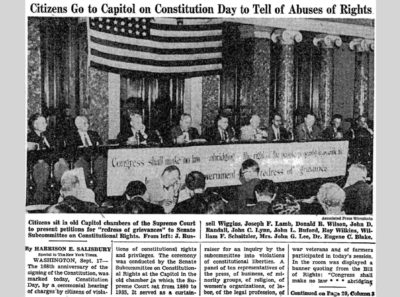 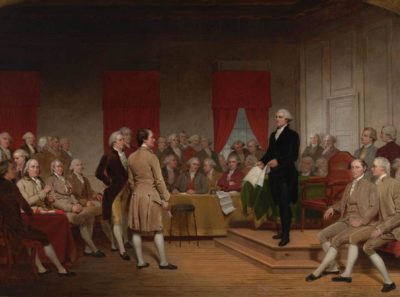 The opening words of the preamble to the Constitution of the United States of America focus on the reasons for the founding document’s creation: to remain unified, just, and at peace. That vision of tranquility trails off through Lawrence’s use of an ellipsis in his title caption, suggesting the four months of intense work in Philadelphia’s summer heat by the delegates. Lawrence pictures the 13 state representatives gesticulating and sweating in a complex, oppressive space as if presenting theater on the national stage. A heavy gray and black curtain provides the backdrop to this post-revolutionary drama. Seven sword hilts set upstage symbolize the quorum of states required to define the American people and how they should be represented and governed.

This illustrious group agreed that black people would be counted for the census, but not given freedom, citizenship, or the right to vote in what became known as the Three-Fifths Compromise, a concession which ultimately led to the constitution’s final ratification.

Rather than picture the peaceful moment of resolution depicted in popular images of the signing, Lawrence chose to picture an American creation story defined by moral exhaustion and political struggle.

“Pictures can lie, and often do. . . . By the same token, some pictures can tell the truth in a way that words are powerless to match.” These words by the historian Roger Butterfield would have struck a chord with Lawrence, who had long marshaled his expressionist visual language to tell hard, unspoken truths about America’s history. What is noteworthy about Lawrence’s approach to this panel is how

he skillfully employs pictorial symbols to suggest the struggle that took place during the Constitutional Convention while distilling its ongoing implications in the civil rights Era.

Unlike a number of earlier paintings on the subject, such as Junius Brutus Stearns’s 1856 Washington as Statesman at the Constitutional Convention, Lawrence decided not to portray the peaceful moment of resolution when thirty-nine of the fifty-five delegates finally agreed to sign the Constitution. Instead, he evokes the contentious debates surrounding issues of liberty and justice that underlined the monthslong proceedings.

The figures, who bear white beads of sweat and strained facial expressions, are both physically and metaphorically enmeshed in a complex, oppressive space. In September 1955, the very moment Lawrence was on a Yaddo fellowship working on this and other panels of the Struggle series, the nation marked the 168th anniversary of the signing of the Constitution with a ceremonial hearing in which citizens voiced violations of constitutional rights. The words of the National Association for the Advancement of Colored People (NAACP) executive secretary captured the tenor of the times: “In no area has constitutional freedom been so seriously eroded as in the area of the civil rights of Negro citizens.”

Zarina Lewin Responds:
Zarina Lewin is a sixteen-year-old who lives in Brooklyn, NY. She joined the Schomburg Teen Curators program because she is very passionate about art from painting and sculptures to writing. She is currently a student at Frederick Douglass Academy.

“Struggle” is a term used to emphasize the difficult hardships that challenge one’s way of living. Struggle helps to develop the person who each of us becomes. However, it may also be the thing that brings us down. Jacob Lawrence’s paintings portray visually the struggles that millions of people have had to endure. Struggle can change a person for better or for worse. As panel 15 of the Struggle series suggests, decisions can be a type of struggle, because making one mistake can affect multiple parties, with harmonious or devastating results.

Trying to please everyone is another struggle.

If we focus on two aspects of the painting, we see how it involves struggle in government decisions. First, there are thirteen men who are working on the Constitution. They are sweating and look tired. Determining what to include in a constitution can be frustrating and time-consuming. These men struggle to decide what to do in order to maintain peace within all the states.

The second aspect to look at closely is in the front of the painting. The swords there represent how many men must vote in order to approve the Constitution. Seven out of the thirteen men must be on the same page. Not all people have the same opinion in a matter that involves not just them but others as well. A majority of the parties must agree, yet they all want to minimize any disadvantage to their own state. And while every man wants to gain benefits for his state, he does not want to anger the others.

This painting symbolizes the challenge and pain of working with others. All the participants give their own input and sometimes refuse to change their opinion, no matter what. Voting makes it even harder.

In the end, debating with your peers can bring out the best in you. Adding your opinion to the debate can help you break out of your shell.

I am an introvert and considering this helped me realize that having a voice is a good thing.

In the painting, only men are present. As a young woman, I think it would have been more fair to have both men and women in the room for this debate, to fully represent everyone, not just the men. Even today there are fewer roles for women. The world is made up of both genders.