This is one of the missing panels from the series. 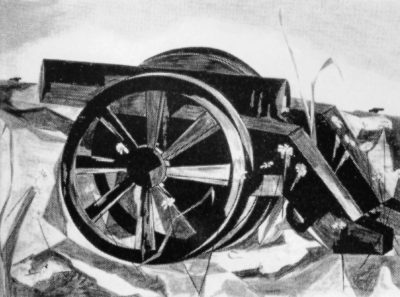 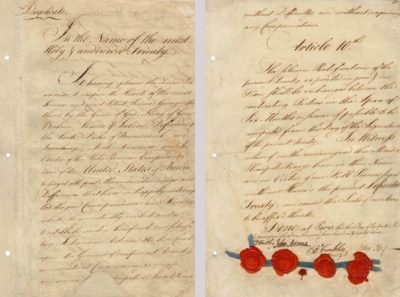 No Indigenous nations were invited to the negotiations of the Treaty of Paris or consented to the peace accord. The treaty, signed in 1783 by representatives of Great Britain and the United States of America, formally recognized American independence and the new nation’s enlarged boundaries. Only a black and white image survives for this painting, which captures the tenuousness of peace through a few daisies growing around three idle cannons.

Masud Olufani Responds:
Masud Olufani is a television and film actor and mixed-media artist in residence at the Atlanta Contemporary Art Center. His work has been exhibited in group and solo exhibitions nationally and internationally.

This haunting painting stands in stark contrast to the frenetic energy of the other paintings in the Struggle series depicting seminal events in the founding of the republic. Placed between the panels Victory and Defeat on one end and We, the people of the United States . . . on the other, Peace includes the image of three abandoned howitzer cannons — one centrally placed in the foreground of a barren landscape — punctuated by symbols of hope in the form of several daisies growing stubbornly, resiliently, in the aftermath of war. The juxtaposition is striking. The cannons, as instruments of destruction and subjugation, embody the mechanics of armed conflict, while the flowers imbue the plaintive mood of the composition with the promise of renewal and rebirth. The stillness of the work, which lacks any representation of the corporal form, provides a quiet moment of reflection and contemplation in the midst of the sweeping drama found in the surrounding panels. It is a living memorial to what was lost, and an auspicious harbinger of what may be. It is a false hope, however. Less than a hundred years later, the embers of the Revolutionary War would feed the fires of the Civil War. Lawrence’s Peace is the conceptual shackle that links the past to the future, independence to freedom.

L’hussen De Kolia Touré Responds:
L’hussen De Kolia Touré is a homeschooled high-school junior. He was a 2017 NYC Youth Poet Laureate Ambassador and member of the 2017 Urban Word NYC Slam Team and has served as a Federal Hall Writing Fellow and Word/Works Tumblr Writing and Media Fellow. He has participated in AXE’s Find Your Magic Initiative, a movement to celebrate diverse examples of modern masculinity, alongside singer-activist John Legend and poet-activist Carlos Andres Gomez.

Hauling my body over to Planet Fitness, I tremble at the thought that someone will see me for the interloper that I am. To distract myself, I play a Nicki Minaj song that fills my hips with a boisterous energy. A peacock gait consumes me. I suddenly hear, “He even look like a faggot. Don’t he?” I pause the song to observe the antagonist’s scornful visage fully. I recall that he works at the car wash that my mother goes to regularly, though his scowl indicates differently. Shock pours into my body like lead, forcing my walk to grow more stolid with each step.

My representation of manliness sometimes feels like an ignominious detraction from the hegemonic conception of blackness. Thus I become chemically opposed to all of the people in my life. I have learned that racism does not depart in those moments wherein black people idly harm one another. As black masculinity is ipso facto racialized, the racism derives from how the cultural definition of blackness convinces me that I must abstain from authenticity in order to exist in my community at all. As a result, I fear some of the loving black people who constitute my world, and distance myself with that prejudice. Indeed, we remain unaware of how tragic and racist our intolerance is, as it becomes servile to this war that we entertain. This realization informs how I interpret Panel 14, Peace. The cannon ostensibly and initially feels vestigial and antique. However, its basic purpose remains fearsomely the same, as a weapon of mass destruction. Treating the vestigial cannon as metonymic for a declined preoccupation with warfare, Lawrence proffers that the American colonists may have deceived themselves into believing that foreign relations with Britain were peaceful and that thus these weapons were for the most part useless to them. But the deception does not successfully purify the weapon. Similarly, we as a modern black community have formed disadvantaged imaginations of racism. Our contestations were once a useful weapon of warfare, as during the Tuskegee Institute student movements to protest the murders of black people. This context is not condemnable; rather, it is honorable. However, we cannot forget the utility of reproach in warfare. Our community has reimagined that weapon as a vestige purely in situations that do not represent mainstream racism, such as in intracommunal affairs regarding those with intersectional identities. But our community is not so internally sound that the weapon withers; rather, the weapon of words proves to still be fearsome and destructive.

Looking at the painting, my pleasure at observing this withering weapon is gone. But there is still something to be gained. The piece activates in me a passion to dissolve barriers within my community because it illustrates the ultimate goal: the fantasy wherein disuse allows the menacing wartime instrument of words to sprout tantalizing flowers.