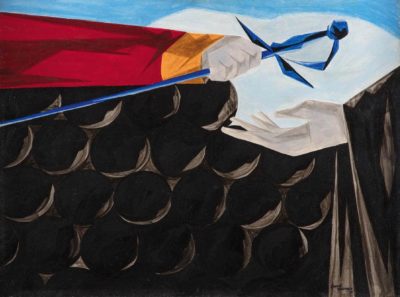 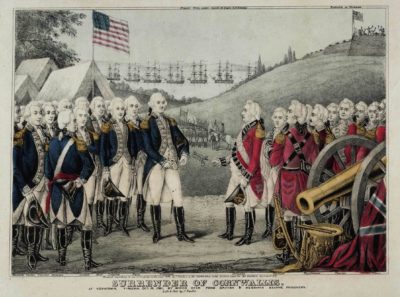 A wall of twenty-two black cannonballs symbolizes the successful twenty-two-day siege at Yorktown, Virginia, when American troops forced the British occupying the town to surrender, effectively ending the American Revolution. The wall is a backdrop for the sword exchange that took place on October 19, 1781, between two appointed delegates on behalf of Generals George Washington and Charles Cornwallis. Lawrence focused on this imminent transfer of power by creating a gap signified in the white space between the hands—and

a pause in the moment of action that seems to hold the new nation’s independence in suspense.

Harvey Ross Responds:
Harvey Ross is the collector of more than half of the panels from Lawrence’s Struggle series and has studied the works for the past twenty-five years.

When I first saw Victory and Defeat, I neither understood its message nor appreciated its power. My interest was in acquiring Struggle series works that could stand on their own, that were historically important and aesthetically pleasing. This small-scale panel is subtle and requires careful scrutiny to grasp its depth and richness. I wondered what those circular shapes, extended arms, and the sword were all about.

Upon close inspection I recognized the strength of the narrative as moving from left to right: the rules of war were replaced by the rule of law.

At first the lower white hand seemed disembodied and almost camouflaged. I gradually visualized it as an extension of the judicial process clothed in a black robe into which the black cannonballs merged as Cornwallis’s sword was accepted at Yorktown. Yet the compositional dominance of those cannonballs suggested a latent presence in our ongoing struggle for civil society. The work is crowned by a prominent white mass of clouds accompanied by a sliver of rich, vivid blue background, offering hope for the future.

Lawrence was a heroic African American artist of great stature and modesty who struggled during the American Century as it slowly arced toward greater justice. Yet he retained his good humor and optimism, which helped to see him through hard times — a personal narrative embodied in Victory and Defeat

Lucia Santos Responds:
Lucia Santos is a sixteen-year-old artist and writer from Seattle, WA. She values her community deeply as well as connecting with the environment and natural world. She was a contributing illustrator for Rookie magazine from 2016 to 2018 and is now involved in the Teen Art Group at the Seattle Art Museum.

When I first viewed Jacob Lawrence’s Victory and Defeat (1955), it did not strike a chord with me. I noticed how some of the colors were strangely calm next to the harsh black of the cannonballs. It only made me feel uneasy, nothing more. I continued to the next paintings in the series, depicting the excruciating intersections of history and change, where women fired guns and people staggered on battlefields—the energy far more frenetic.

Yet I found myself returning to Victory and Defeat. Alongside the dynamic environments of the other panels in the series, this image continued to strike me as a stagnant one. When I really took the time to see it on its own, however, I found a quiet struggle in the static.

In the baby-blue egg-tempera air between those two gray hands is power. Power is blue, and cold, and sharp. Power is a sword, in Lawrence’s vision. Power given from one party to a new one, held and passed on. Between those hands there is apprehension, similar to what one witnesses in the other panels. But different in that no drastic movements are made to demonstrate it; simply the gravity of the two hands, together and apart.

Within this painting’s stillness, I interpret turmoil, but I sense complacency, too.

The two hands are each giving and receiving power, in a never-ending cycle.

When struggle is less visible, complacency thrives. It is the space between victory and defeat, when one is stuck in a system or cycle, never seeing or seeking broader, deeper liberation. In my own life, I find myself slipping into apathy when I feel removed from the pain of others. In my country, I feel it increasing as I read horrifying stories of people in deep pain at the border. Through a screen, I share parts of my identity with some of the people whose painful stories are broadcast out into a digital void; reaching out for empathy, justice, anger, anything but my complicit silence. Still, I keep scrolling.

Victory and Defeat feels clear yet ambiguous. Power is shared but remains in gray hands. Power remains a weapon. Soft colors contrast a pile of cannonballs ready to inflict pain on the next group that might rise up and threaten the present hierarchy. The hand receiving once threatened the rule of the hand that gives. True liberation is hard to find, and just as tedious to seek.

I see power turn into complacency when old societal systems remain intact. Revisions of these systems, ever so slight and oppression pristinely kept in place.

I see apathy seeping into my mind and the minds of those around me as we are further removed from the struggles of others.

We move forward, convincing ourselves that we are progressing, when in reality we are leaving power in the same places. And as in stagnant water, we settle into decay.