And a Woman Mans a Cannon 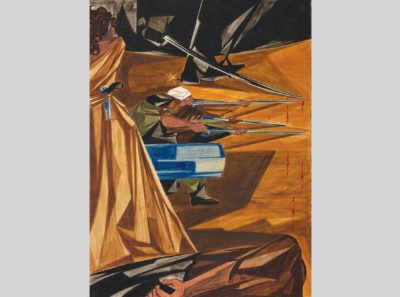 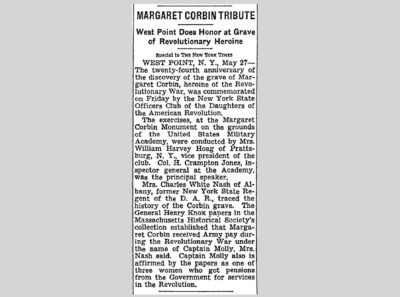 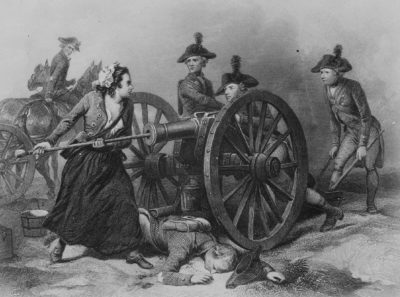 James Charles Armytage, Molly Pitcher at the Battle of Monmouth, June 1778, about 1859, courtesy of the Library of Congress, Prints and Photographs Division

Margaret Corbin accompanied her cannoneer husband into the Battle of Fort Washington in New York on November 16, 1776. When the British killed him in action, she filled his post by loading and firing the cannon with great accuracy before drawing enemy fire. No taller than the belly of her commander’s horse, Corbin struggled against larger forces in battle and for the rest of her life as a woman veteran. In Lawrence’s eyes, she is reinvigorated as a commanding figure, standing with her gun upright and in relief at the left margin of the assembled soldiers.

Deborah McDowell Responds:
Deborah McDowell is Alice Griffin Professor of English and director of the Carter G. Woodson Institute for African-American and African Studies at the University of Virginia.

What to make of the painting’s title in relation to the canvas itself? How do we explain this seeming incongruity: a woman “manning” a cannon, on the front lines of war, no less? The title prompts the viewer to expect the depiction of a woman, but we see her only through the feminine iconography of a dress (a pistol tucked in the back of her belt). The “woman at war” is obscure, her “presence” shifting with each view. Only after multiple viewings did I squint to perceive cascading curls atop her head. Her distorted face is locked in a grimace.

If this painting is meant to depict a fearless woman on the battlefield, it is odd that Lawrence positions her at the outer edge of a crowded frame including Corbin’s dead husband, the phallic cannon, and three soldiers hunkered down near the ground, blood dripping from their rifles. At one glance, Corbin seems a commanding figure, standing upright and in relief, but at another, her dress, its color matching the expanse of ground, casts her in camouflage. Here, now, the shifting and exaggerated perspectives of the painting render her indistinct, almost abstract.

In interviews, Lawrence conceded that his work was indeed abstract, in that it was “designed and composed,” but not in the sense that it evacuated human content.

He found inspiration in historical figures whose stories shed light on the agonies of racial battle and inspired a people locked in a perpetual, collective struggle.

WEST POINT, N.Y., May 27- The twenty fourth anniversary of the discovery of the grave of Margaret Corbin, heroine of the Revolutionary War, was commemorated on Friday by the New York State Officers Club of the Daughters of the American Revolution. The exercises at the Margaret Corbin Monument on the grounds of the United States Military Academy were conducted by Mrs. William Harvey Hoag of Prattsburg, N.Y., vice president of the club. Col. H. Crampton Jones, inspector general at the Academy, was the principal speaker.

Mrs. Charles White Nash of Albany, former New York State Regent of the D.A.R., traced the history of the Corbin grave. The General Henry Knox papers in the Massachusetts Historical Society’s collection established that Margaret Corbin received Army pay during the Revolutionary War under the name of Captain Molly, Mrs. Nash said. Captain Molly also is affirmed by the papers as one of three women who got pensions from the Government for services in the Revolution.