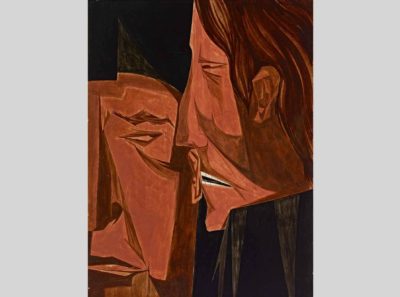 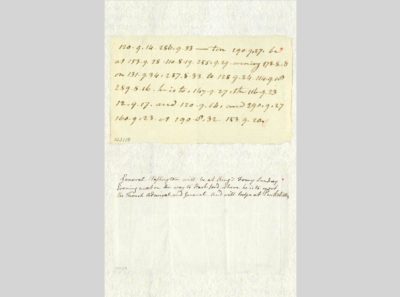 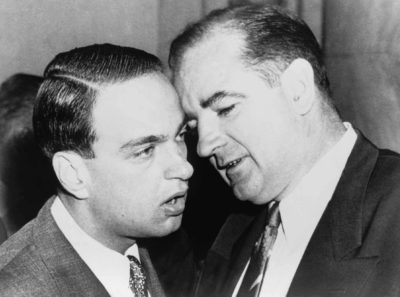 The title caption for this panel is an excerpt of a coded message written in the numerical substitution system used by the American Revolutionary military officer turned traitor Benedict Arnold. On September 15, 1780, Arnold informed Sir Henry Clinton, the British commander in chief, and his aide-de-camp, John André, of General George Washington’s secret plan to cross the Hudson. The message was deciphered by the loyalist poet Jonathan Odell to read,

General Washington will be at King’s Ferry Sunday evening next.

Lawrence juxtaposes this written message with the image of an informer whispering in the ear of his contact. By eliminating the space between the strained faces, Lawrence emphasizes the clandestine, dangerous, and sometimes fatal nature of espionage. André was captured by the Americans and hanged as a spy on October 2, 1780, while Arnold escaped to England with General Charles Cornwallis after the surrender at Yorktown. Arnold died an enemy to the American cause in London on June 14, 1801.

In Lawrence’s Time: The photograph in the slideshow above captures Senator Joseph McCarthy (right) and his chief counsel, Roy Cohn (left), whispering during a break from the House Committee on Un-American Activities hearings in June 1954, a televised event that may have inspired Lawrence’s image for Panel 11. During the hearings, the men interrogated American citizens suspected to be communists. Their investigations created widespread fear and discredited many of Lawrence’s fellow progressive artists and friends as disloyal Americans.

With its extreme close-up view of the partial faces of two men — one in profile whispering, one full-face listening — an informer’s coded message references an aspect of Revolutionary War history when spying and relaying secret information about military plans had grave consequences.

Lawrence’s source for this particular secret numerical code was a photographic illustration of the handwritten ciphers penned by Benedict Arnold, discovered among the papers of British General Henry Clinton and published in Carl Van Doren’s Secret History of the American Revolution (1941). Arnold based his code on William Blackstone’s Commentaries on the Laws of England (1765–69); Washington’s men used a similar cipher, the Culper Ring Code. The historical consensus contends that Arnold betrayed the nation for both money and British glory as well as to settle grudges.

Lawrence clearly realized the contradictions implicit in informing, as evidenced by his verso inscription “Rebel or Loyalist?” During the early 1950s, informers to the FBI or “friendly” witnesses at the hearings of the House Committee on Un-American Activities and Joseph McCarthy’s Senate Permanent Subcommittee on Investigations were creating widespread fear by discrediting Lawrence’s fellow progressive artists, many of them his friends, for their allegedly subversive political beliefs.

Lawrence well understood the dishonorable motivations —for money and glory — that could fan domestic Cold War tensions and ruin careers.