We crossed the River at McKonkey’s Ferry 9 miles above Trenton . . . the night was excessively severe . . . which the men bore without the least murmur . . .
—Tench Tilghman, 27 December 1776 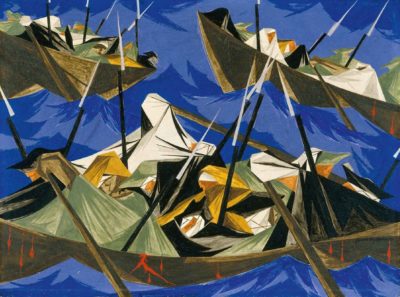 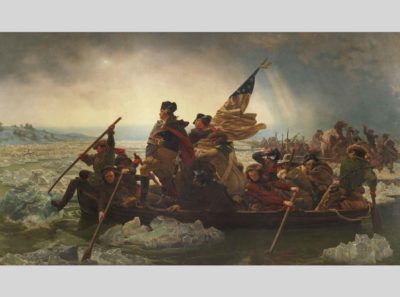 Lawrence relied on the firsthand observations of General George Washington’s aide-de-camp Tench Tilghman to revive the experience of the men who crossed the Delaware River on the night of December 25, 1776, to surprise Hessian forces in Trenton, New Jersey:

Our party amounted to 2400 Men We crossed the River at McKonkey’s Ferry 9 miles above Trenton The Night was excessively severe, both cold and snowey, which the Men bore without the least murmur. We were so much delayed in crossing the river, that we did not reach Trenton till eight OClock, when the division which the General headed in person, attacked the enemy’s outpost.

In this painting, he imagined the scene as three small boats crowded with passengers, wrapped in blankets and tossed by choppy winter waters. Rather than highlight the celebrated leadership of the well-known painting Washington Crossing the Delaware, Lawrence chose to focus upon the bravery and perseverance of the nameless men who went on to win the battle.

Sylvia Yount Responds:
Sylvia Yount is Lawrence A. Fleischman Curator in Charge of the American Wing at The Metropolitan Museum of Art.

Here, Lawrence affirms his revisionist approach to the early history of the United States, bringing a fresh perspective and counternarrative focus to an iconic subject — General George Washington’s crossing of the Delaware River at Trenton, New Jersey, on Christmas night, 1776. In an inversion of other renditions — most widely popularized by Emanuel Leutze’s 1851 monumental canvas —

Lawrence foregrounds the collective action of anonymous soldiers rather than glorifying a single heroic leader.

Yet, like the earlier canvas, the Struggle painting emphasizes the “revolutionary” nature of the crossing. Leutze’s picture, conceived during the 1848 revolts in the German states, was received as a celebratory American statement marking the fiftieth anniversary of Washington’s death.1 Leutze was the first artist to depict the first US president standing in a boat on such an epic scale; Lawrence takes the opposite approach — eliding the “great man” narrative with his intimate focus on the nameless soldiers in a quiet yet charged scene. Fused as interlocking planar units in three boats, rocking on the rough, cold water, the seated men appear as heavily cloaked figures, frozen in an agitated if static state. The vivid drips of red paint, signifying blood, on the sides of the boats at center and upper right assert the artist’s emphasis on the violence and sacrifice that made American nation building possible.

In the tradition of artist-educators, Lawrence produced his Struggle series to make history more rebellious, democratic, and complex in a manner that continues to resonate today.

Vessels containing anxious men violently sway on a bed of tumultuous waves. Trapped in a storm, George Washington and his men are left to face the currents and winds of the unknown. The boats are rusted and beaten from months of drifting in choppy waters. Frail green, yellow, and white tents poke out from each boat in a futile attempt to protect the disheveled Continental Army from the elements. Silver-headed spears stick out from the boats erratically as if in duel with the weather.

Inscribed on the back of the painting are the words of Washington’s extremely devoted aide-de-camp, Tench Tilghman: “severe.” At a time of low morale for the colonial public during the Revolutionary War, Washington believed spirits could be boosted if he and his troops could cross the Delaware River and defeat the Hessians. United with his men in their desire for legitimacy and liberation, Washington led them across the river and made it to an isolated area. This strategy proved victorious for the American colonists yearning for freedom from Great Britain.

This painting evokes a sense of helplessness, which stems from the experience of struggle, while the men are subject to the uncertain whims of nature. If we are placed in the direction of the unknown, we enter a fight-or-flight state of mind, which can result in protection in the short term but agony in the long term. In this case, the army enters fight mode in order to resuscitate a chance of gaining freedom. The men sit stone-faced underneath their tents and rain shields, floating along the rippling water.

In today’s context, this painting can be understood as the universal struggle to express fear, worry, and anxiety, which stems from a fear of being judged. The true struggle depicted is the expression of emotions. Although the soldiers probably questioned their fate after Washington ordered them to cross the Delaware, they remained stoic about their conditions.

This fight wasn’t about them, their well-being and emotions, it was about independence and the future of the American colonists. However, this compromise between the greater good of the nation and emotions of individuals must have left them emotionally barren.

Not only did the troops question what was to be their fate, whether they would make it out alive in the end, but they must have questioned the significance of their crossing in the bigger picture of the Revolutionary War. Was this sacrifice worth the liberation? How would they implement their newfound ideals of democracy and freedom? And most important, with the monarch no longer ruling, who would have power, and who would be subject to that power? Since then, one thing that hasn’t changed generally is the human desire for dominance. Our emotions are sacrificed for the retention of power.