After Panel 16 surfaced in the Fall of 2020, news broke yesterday of Panel 28's discovery in this New York Times story. The location of three paintings from Jacob Lawrence’s 30 panel narrative series Struggle: From the History of the American People series (1954-56), remains unknown. With the 5-stop national tour of Jacob Lawrence: The American Struggle well underway, it is our hope that the increased awareness of Jacob Lawrence’s work will help to fully reunite this historic series for the first time since 1960. 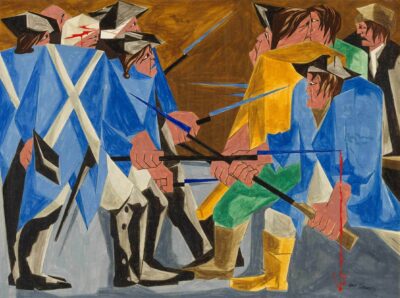 Jacob Lawrence, (American, 1917–2000). There are combustibles in every State, which a spark might set fire to. —Washington, 26 December 1786, Panel 16, 1956, from Struggle: From the History of the American People , 1954–56. Private Collection © The Jacob and Gwendolyn Knight Lawrence Foundation, Seattle/Artists Rights Society (ARS), New York. Photo by Anna-Marie Kellen.

“I didn’t know I had a masterpiece,” a nurse on the Upper West Side told The New York Times. Perhaps you do too... and you don't know it. Our missing art campaign encourages all to search for the remaining three panels. With a style that was expressive and symbolic in form, Lawrence combined Social Realism and modern abstraction to create vibrant and graphic compositions. The paintings have not been seen together since a gallery exhibition on Madison Avenue in New York City in 1960. All three panels are 12 x 16 inches and painted with egg tempera on hardboard. While we don’t know what one panel looks like, two can be identified from the images below. Please continue to read on for more clues on how to recognize these paintings. I encourage you to take a look around, perhaps in your aunt's guest bedroom or in an attic at your grandfather's house!

With the exciting news of these recent discoveries, I want to take this opportunity to share more information about the three paintings that remain at large. 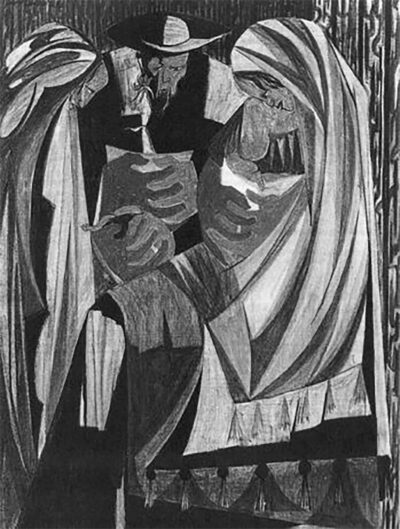 In 1952, Jacob Lawrence was busy conducting library research for his seventh narrative series of which he described “will depict the struggles of a people to create a nation and their attempt to build a democracy.” Lawrence was represented by Edith Halpert, the great American art gallerist and owner of the famed Downtown Gallery. However, in September, Halpert’s longtime employee Charles Alan opened up his own Alan Gallery at 766 Madison Avenue to represent the next generation of Halpert’s artists, including Lawrence. At 35, Lawrence was the youngest artist represented by the new Alan Gallery.

As Lawrence began to paint the series, Alan wrote to museums, curators, and collectors across the country to secure the work’s placement in a prominent collection. In 1955, Alan wrote to Katherine Kuh, curator of modern painting and sculpture at the Art Institute of Chicago, in which he stated, “I am convinced they are the best thing he has ever done….I feel strongly that these paintings, this series, which really represent Lawrene’s feeling about the meaning of America, the meaning of democracy should be exhibited all over the world.” To Alfred H. Barr Jr, director of the museum collections at MoMA, Alan asked for help selling the paintings privately to a “Mr. Rockefeller” or “Mr. Whitney.” In a letter to Stanley Marcus, president of Neiman Marcus, Alan proposed an advanced sale for all the panels on the basis of a nationally touring museum exhibition. No one responded favorably.

It is clear that the art world wasn’t ready for Lawrence’s vision of America at mid-century: an integrated, complex history of underrepresented contributors and how their collective struggles create the story of America. Throughout Struggle, Lawrence paints enslaved people, women, Native Americans and Europeans alongside founding fathers and celebrates a diversity of voices as individual panel titles. Known for his portrayal of African American history in a narrative series format, Lawrence’s decision to broaden this project’s scope to include everyone simply shook those art world gatekeepers and the categories they placed on the artist.

After two years of marketing Struggle, Alan finally found a buyer for all 30 panels and brokered a deal with Long Island collector William Meyers on January 8, 1959. The agreement executed between the three parties stated that Meyers agreed to the purchase price of $9,000 for all thirty paintings. However, there was no stipulation barring Meyers from reselling the paintings individually. And that’s what he began to do, shortly after the 1959 purchase.

However, in 1960, Charles Alan’s sister and art critic Aline B. Saarinen curated nine of the 30 Struggle series panels into a nationally touring Jacob Lawrence retrospective supported by the Ford Foundation. The retrospective’s exhibition booklet is where we find the first and only image of panel 14, Peace. This black and white image of an idle cannon was printed without its title caption in Saarinen’s 1960 publication yet has been reunited with its textual component for our exhibition and publication. This image remains the only one we have.

Panel 14 refers to the Treaty of Paris, signed in 1783 by representatives of Great Britain and the United States, formally recognizing American independence and the new nation’s enlarged boundaries. Notably, Indigenous nations were not invited to the treaty negotiations or consented to the peace accord. Panel 14 is one of two “peace” paintings within the narrative, the other being Panel 26. Both panels mark a moment of pause between battles, but are tenuous and unsettling. Lawrence uses feeble flowers in the landscape to symbolize new and vulnerable growth.

Unlike panel 14, panel 20 does not have a surviving image as the painting has never been published. Entitled Spindles, the panel most likely refers to the straight wooden spikes used to spin and twist fibers. The cotton gin, invented in 1793, engineered rows of spindles to clean cotton rapidly: fifty pounds of cotton could be cleaned in a single day versus one pound cleaned by hand. Even though the United States abolished the slave trade in 1808, Lawrence knew that the invention of the cotton gin led to the South’s maintenance and expansion of slavery as the cotton industry grew to become the nation’s most profitable. Salamishah Tillet, Jacob Lawrence: The American Struggle exhibition publication contributor, Henry Rutgers Professor of African American and African Studies at Rutgers University, and New York Times contributing critic at large envisions, “Three women sitting in a triangle. The one at the top stretches her hands out to catch the thread as it falls from the wooden wheel. At the very bottom, a younger woman sits, head down, hands sorting out the white yarn. Right above her, and in the middle of the portrait, another woman stands, dipping the threads in a bucket filled with a bright indigo liquid. Their bodies are framed by a windowpane that spies an orange sun setting in the background.

The third painting that remains missing from the series is panel 29,A cent and a half a mile, a mile and a half an hour. —slogan of the Erie Canal builders. While the painting’s location remains unknown, the color image comes from Over the Line: The Art and Life of Jacob Lawrence and Jacob Lawrence: Paintings, Drawings, and Murals (1935-1999), A Catalogue Raisonne. This two-volume set published in 2000 chronicles the life and art of Jacob Lawrence. At the time of this project, panel 29’s whereabouts were known; however, ownership and provenance have come into question since. 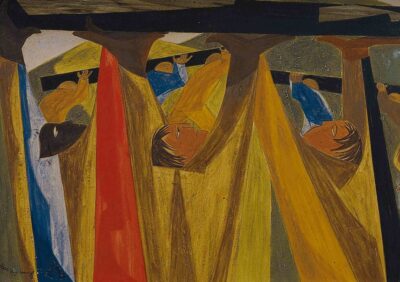 It is my sincere hope that with the national tour of Struggle: From the History of the American People and it’s remaining stops at the Seattle Art Museum and in Washington, DC at the Phillips Collection, that panel 29, 20, and 14 come to light so that all Americans can have the opportunity to share in Lawrence’s vision of the American struggle. Any tips or information about the location of Panels 14, 20 and 29 may be sent to: missingpanels@pem.org 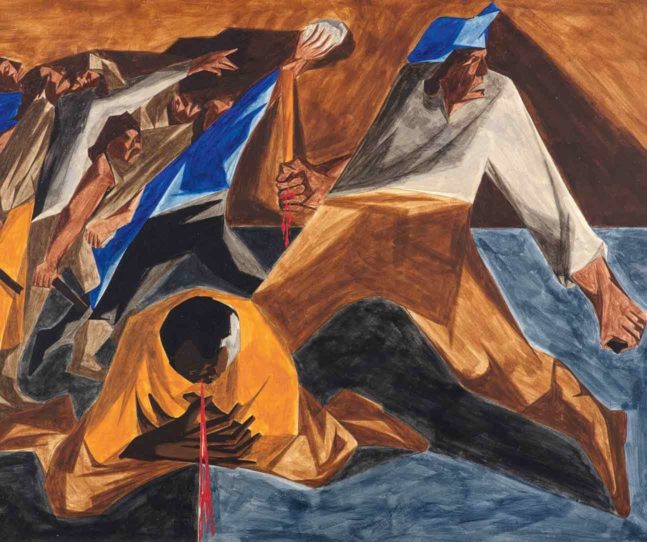 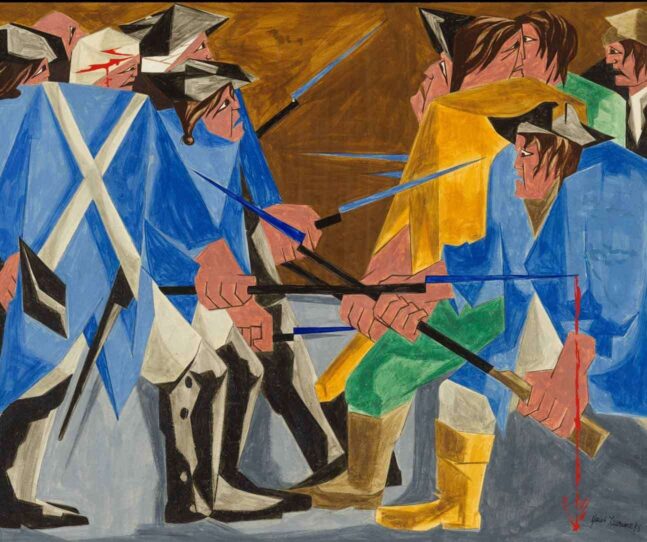 Lawrence exhibition leads to discovery of a lost work 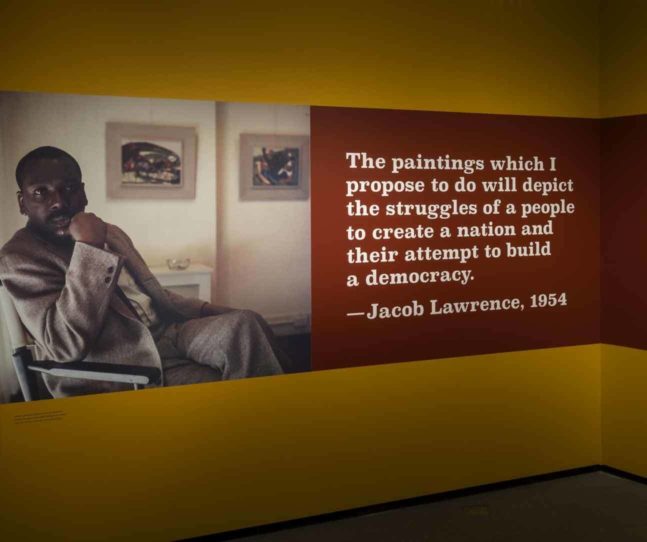 Inspired by Amanda Gorman: Find your voice with Mass Poetry Festival
Telling the story of the Mahabharata