Claude Barnes climbs down from the high rung of a ladder, stepping back to survey his work. “The rule of thumb is 10 feet,” he says. “If I back up, I can make sure that I’m seeing what I think I’m seeing … it’s coming along.” 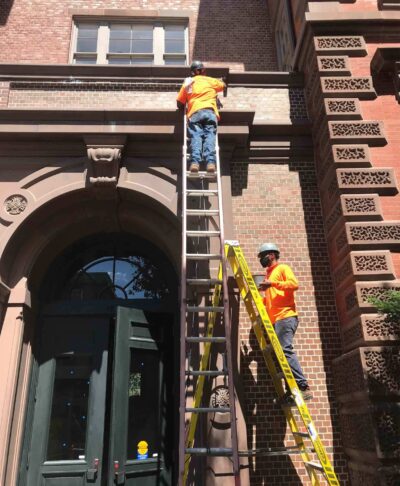 Working in rising summer temperatures, trying to beat the windy and rainy after-effects of a hurricane, Barnes and his partner worked quickly to stain the brick facade built in 2020 to bridge PEM’s Daland House (1852) with Plummer Hall (1856).

This is why taking care of the brick is so important. Barnes and Aljernon (AJ) Smith drove up from New Jersey with the company Nawkaw, who specialize in architectural finishes. Before starting the job, the experienced artisan technicians mixed four colors of acrylic-based custom stain. Barnes says he’s been experimenting with color since he was 5 years old and now creates abstract paintings as well as portraits of some of his favorite musicians like Miles Davis and Josephine Baker. After working other construction jobs, Barnes was thrilled to find something that uses his artistic talents.

Meanwhile, Smith, a poet and musician, begins to tint the brick a rusty clay color with a delicate sponge, leaving several bricks alone. 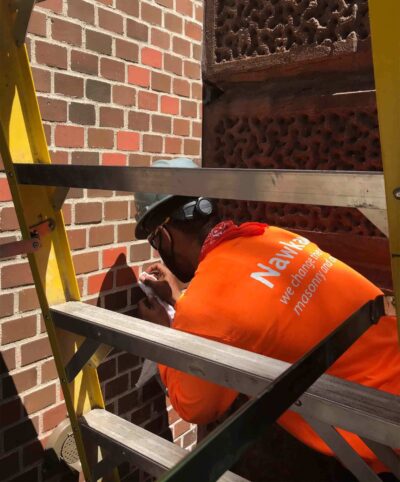 That’s where these artisan techniques come in as handy solutions when constantly maintaining 24 noted historic properties, says Steven Mallory, Manager of PEM’s Historic Structures and Landscape. PEM’s architecture collection, the largest of any American art museum, includes seven properties designated as National Historic Landmarks and all but four are listed on the National Register of Historic Places, creating a whole lot of upkeep. Think of these buildings like a fuzzy photograph, versus a sharp high-res photo, describes Mallory. “We’re always trying to get that resolution higher and higher. We’re looking for the latest scholarship and science to make it even sharper,” he adds.

PEM’s Manager of Historic Structures and Landscape Steven Mallory reveals some of the discoveries found in the John Ward House. Photography by Allison White/PEM.

PEM’s Crowninshield-Bentley House has created one of these scientific conundrums. Mallory is trying to match the paint on an interior door to the original color. Complicated scientific analysis through hundreds of samples has shown that the grain painting on the woodwork was finished around 1960, right around the time the Georgian-style home was moved to its current spot on the museum’s campus. 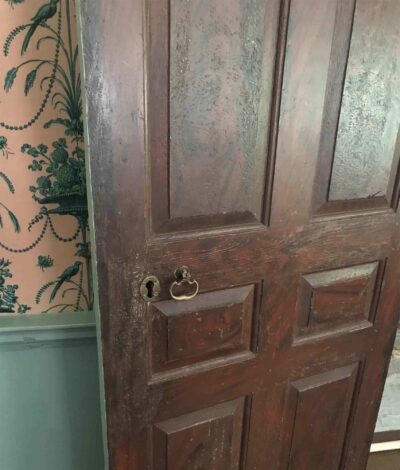 Since the parlor door was grained multiple times, we have contracted with nationally-known conservators specializing in scientific paint analysis. Mallory and his hired researchers are trying to figure out which generation matches with the time the quirky Reverend William Bentley rented two rooms on the second floor and packed in his 4,000-volume library.

Another project in this stately home that is listed in the National Register of Historic Places, is determining the wallpaper that lined the front hall. There is a small surviving sample of elegant 18th-century wallpaper upstairs, hidden behind a door, that the team could use to recreate wallpaper for the front hall.

Then, take the Daniel Bray House, which was recently refurbished. “We had to thread a little bit of a needle for this one,” says Mallory.

All the exterior doors had been lost 100 years ago, leaving no evidence behind. Mallory and his team realized there was an exact replica on Cambridge Street in Salem, so they measured the door to that private residence to build the door on the Bray House. Next, it was time to consult experts on an appropriate color. The goal was for the paint colors to have the effect of transporting the house back over 200 years to when it was extensively renovated by ship rigger and master mariner Daniel Bray in 1806. The options were dark green, black, white or decoratively faux grain. Finally, it was decided that a faux-mahogany, grain-painted finish to the front door would be best, similar to those on the Gardner-Pingree House. This was an elegant, common treatment for doors on buildings of all economic circumstances, says Mallory. Without being able to find an artisan in the short timeframe for completing the work, Mallory did the work himself, saving the museum time and money.

Before coming to Salem, Barnes and Smith worked on the brick and mortar of an eight-story building on Fifth Avenue in Manhattan. “It can be tedious,” says Barnes, “but then you can go across the street and see the finished product. I like that.” He says he’s always had an eye for old buildings. “I love the cobblestone, the hand craftsmanship. It’s history and there are stories in certain buildings.” 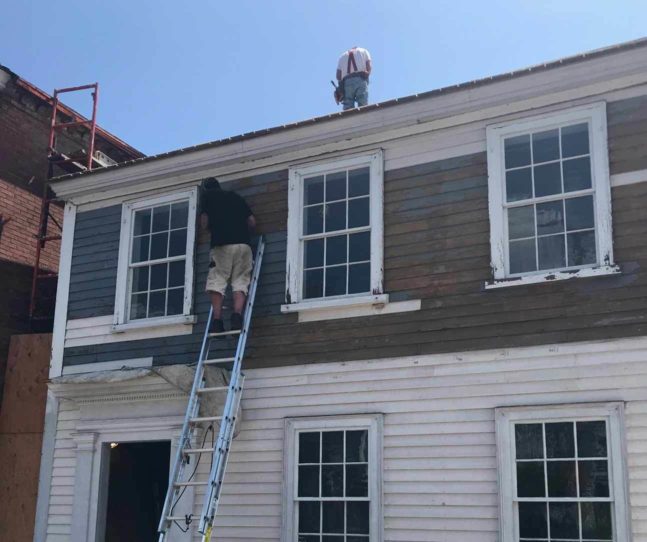 Stories of Salem, From A to Z
The urban picnic: Adventures in social distancing