The Main Campus – located at the corner of the Essex Street and New Liberty Street (no longer a through way) — is the site of most of the museum’s gallery and office space, housed in buildings of various periods. Several historic structures comprise this part of the museum’s campus. 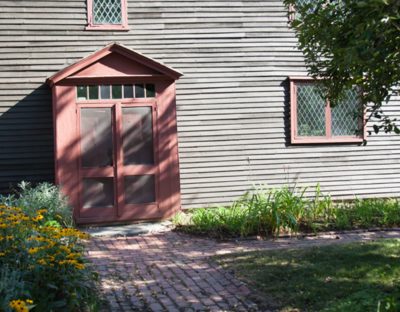 (Charter Street), ca. 1665, is a Post-Medieval or First Period building, “discovered” beneath a much-later mansard roof. It stands on its original site and exhibits the characteristics associated with this style. The house was restored by Historic Salem in 1969 and purchased by the museum in 1983. It is listed in the National Register of Historic Places. 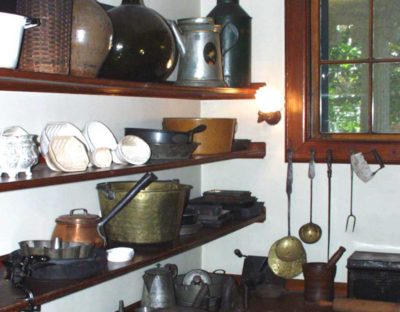 (26 Charter Street), ca. 1841, is a Greek Revival residence built by Salem housewright John Kinsman. The house also features later Victorian additions such as the second-floor oriel window with Italianate detailing. Vilate Young, daughter of Brigham Young and early leader of the Church of Jesus Christ of Latter-day Saints, lived in the house with family friends for several years before moving to Salt Lake City. 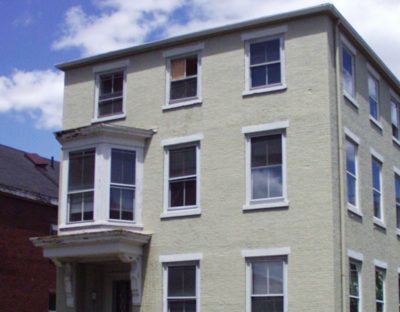 (24 Charter Street), ca. 1805, is a three-story Federal-style building with later Italianate additions such as the second-floor bay window. A fire swept the area in 1866, which may have led to the Victorian “updating.” This house was moved from its original Liberty Street location. 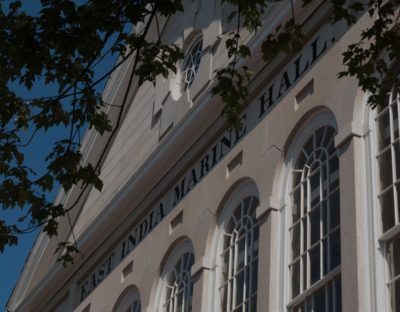 (East India Square) was built in 1824 in the Greek Revival style by architect Thomas Waldron Summer for the East India Marine Society-predecessor to the Peabody Essex Museum. Recently restored to its original elegance, the building is a National Historic Landmark.

(NW Corner Essex and New Liberty Streets) was erected by William Manning in 1830 in the Greek Revival style. Note the richly colored brick, granite-trimmed openings, and prominent rooftop dormers. The building was home to many retailers, including William Filene of Filene’s Department Stores, who began his operations here. It currently houses the museum’s office center.

(SW Corner Essex and New Liberty Streets), 1974, was designed by Philip W. Bourne with Stahl, Bennett of Boston. This contemporary building of the Brutalist school is notable for its broad granite walls punctuated by narrow, dark-glass windows. It was the first addition to the museum in many decades, and its focus on turning inward was common for museums of the period.

(Charter Street) was built in 1876 to house a biology summer school associated with the museum.