SALEM, MA — This January, the Peabody Essex Museum (PEM), debuts Jacob Lawrence: The American Struggle the first museum exhibition to feature the celebrated series of paintings, Struggle: From the History of the American People (1954–56), by Jacob Lawrence. Painted during the civil rights era by one of the best-known black American artists of the 20th century, the series of 30 intimate panels depicts pivotal moments in early American history with an emphasis on the contributions that black people, Native Americans, and women made in shaping our nation's founding and identity. Elizabeth Hutton Turner and Austen Barron Bailly are the organizing curators of Jacob Lawrence: The American Struggle and Lydia Gordon is the exhibition's coordinating curator. The exhibition, organized by PEM and touring nationally through 2021, tackles a question central to Lawrence’s work: “What is the cost of democracy for all?“

Reunited for the first time in more than 60 years, the Struggle series brings American history to life through energetic, expressive paintings that hug the boundary between figuration and abstraction. For this reunion, 25 of the Struggle paintings are accounted for while five remain unlocated. Of these, the known works are presented alongside reproductions of the missing paintings as well as those too fragile to travel. The paintings reflect Lawrence’s desire to “express the universal beauty of man's continuous struggle” and his visual style conveys the physical, emotional, and ideological struggles inherent to the country’s founding.

Born in 1917, Lawrence broke through the color line of New York’s segregated art world when, at the age of 23, he created the Migration Series, a historical narrative that was instantly recognized as a masterpiece and became the first work by a black artist to be acquired by the Museum of Modern Art.

“This truly historic exhibition offers a rare opportunity to encounter Lawrence’s greatest and least-known works while considering our own relationship to the ongoing struggle for life, liberty, and the pursuit of happiness,” says PEM’s associate curator, Lydia Gordon. “His work continues to influence and impact so many today because his messages are urgent, pressing, and timeless.” 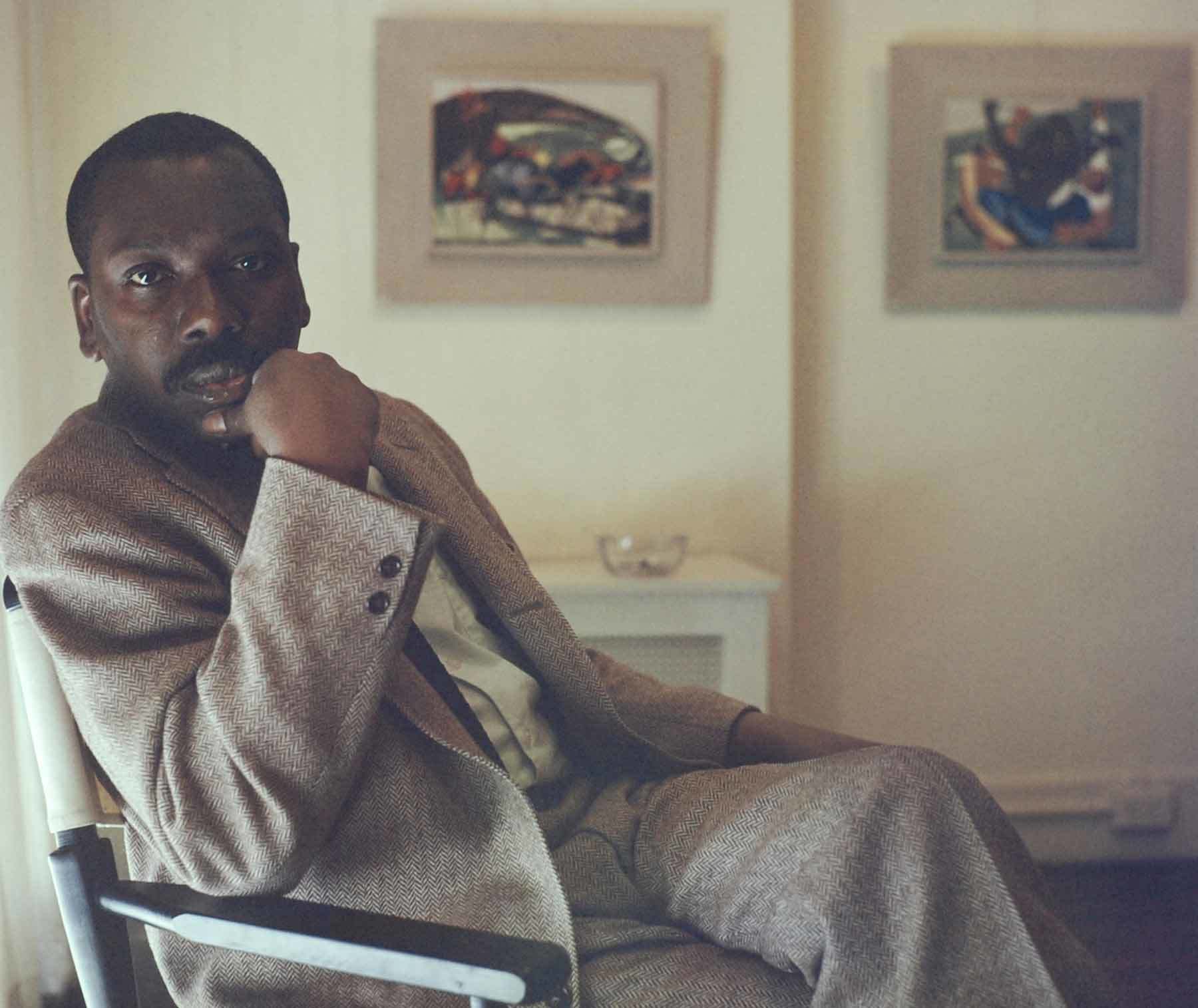 Inspiration and Approach
Jacob Lawrence (1917-2000) was one of the most prominent and celebrated black artists in America in the 20th century. His artistic training was fostered by the luminaries of the Harlem Renaissance and inspired by the stories he heard from elders about the abolitionist movement, black heroes, and familial struggles. Because of the lack of black history taught in American schools, Lawrence chose his early work to depict iconic figures like abolitionists Frederick Douglass and Harriet Tubman. With a style that was expressive and symbolic in form, Lawrence combined Social Realism and modern abstraction to create pared down compositions brimming with vitality and graphic strength. Lawrence went on to create compelling, often metaphorical stories of the black experience and the history of the United States, including the great migration of black communities from the South to northern cities like New York and Chicago.

Struggle
By mid century, Lawrence had perfected his narrative invention of using modestly scaled panels to tell a sweeping epic. In 1949 the national political climate was fraught, freedoms were under threat, and the civil rights movement was gaining momentum. In this context, Lawrence began his research for Struggle: From the History of the American People, a narrative that sought to visualize a more complete — and more complex — version of American history. His goal was to “depict the struggles of a people to create a nation and their attempt to build a democracy.” Lawrence spent countless hours at the 135th Street branch of the New York Public Library (now the Schomburg Center for Black Research and Culture) in Harlem poring over historical texts that included first-person accounts, letters, and coded messages from individuals on all sides of the American Revolution. For more than five years, he read and researched, and then, in May 1954, just as the Supreme Court ruled to desegregate American schools, he began to paint. 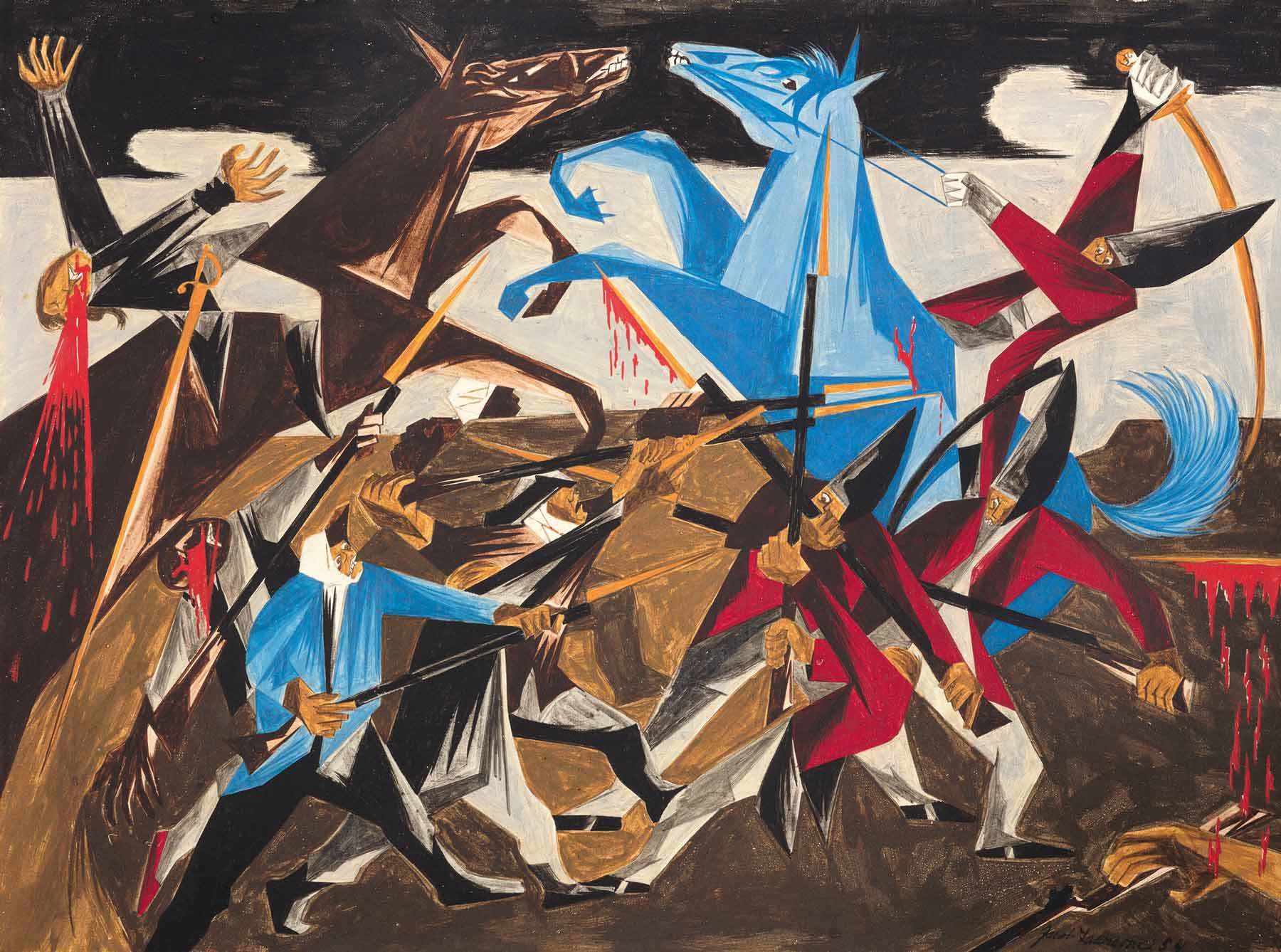 Lawrence’s often lengthy captions that accompany the panels in the Struggle series feature excerpts from famous speeches as well as reports, letters, and petitions from anonymous soldiers and enslaved people. Panel eight depicts the image of clashing soldiers in the Battle of Bennington in 1777, accompanied by the caption “...again the rebels rushed furiously on our men” which is from an account written by a Hessian mercenary (German soldiers who served as auxiliaries to the British Army). The viewer is left to consider the fate of the Hessians, as well as the fate of other mercenaries such as black soldiers who fought in the war. Ironically, after the war, the Hessian soldiers would be granted citizenship long before the descendants of blacks who fought and died in the American Revolution.

The Struggle Continues
The struggle for democracy is as relevant today as it was during Lawrence’s life. Artists Hank Willis Thomas (b. 1976), Bethany Collins (b. 1983), and Derrick Adams (b. 1970) add their contemporary perspectives to the exhibition through the presentation of recent work.

Hank Willis Thomas excerpts images from the vast visual archive of history and reproduces them in new ways. By combining historical research with technological processes, he pushes the boundaries of photography. Visitors can take flash photography of Turbulence (2018) and My Father Died for this Country Too / I Am an American (2017) on their cell phone cameras to illuminate images that are “hidden” beneath the surface, such as a protester resisting arrest in Alabama and a demonstration at a “whites-only” beach in Florida. For Rich Black Specimen #460 (2017) Thomas used archival “runaway slave” advertisements to create a dynamic, larger-than-life three-dimensional version that injects personhood into the otherwise cruelly anonymous form.

Between the 18th and 20th centuries, American songwriters rewrote the lyrics to the melody of “My Country 'Tis of Thee” (also called “America”) in support of varying American causes, including revolution, temperance, suffrage, abolition, Native sovereignty, and slavery. Bethany Collins’ America: A Hymnal (2017) is a laser cut special edition artist book that unifies 100 versions of the song to show how words and meanings change over time. As the laser cut pages of this book are turned, the work is gradually destroyed. An a cappella recording of the hymns being sung accompanies this installation.

Derrick Adams’ video, Saints March (2017), pays homage to past and present cultural influencers of New Orleans, capturing the footwork of local dancers who use Decatur Street as their stage. As Lawrence did in the Struggle series, Adams plays with vantage points, zooming in and out to create portals that energize and transport us to see the past, present, and future anew through the motions of others. For his mixed media installation, Jacob’s Ladder (2020), Adams imagines Lawrence’s studio as a quiet self-reflection space by using materials from Lawrence’s personal archive, such as the artist’s photographs and armchair. Referencing the biblical story, a ladder ascends directly from the chair to Adams’ original portrait of the elder artist. To Adams, this artistic homage represents, “the continuous progression of Lawrence’s life journey and the most magnificent manner in which he expressed his ideas and vision.”

Publicity Images
High-resolution images and captions are available upon request.

Social Media
Share your impressions of this experience using #AmericanStruggle

Exhibition Publications
Jacob Lawrence: The American Struggle is edited by curators Elizabeth Hutton Turner and Austen Barron Bailly and published by the University of Washington Press. This 192-page hardcover catalogue marks the historic reunion of the series by restoring Lawrence’s lost narrative and examining his use of the American historical archive and place as source material. It features 30 distinct voices for the 30 panels in the series as well as the work and words of contemporary artists Derrick Adams, Bethany Collins, and Hank Willis Thomas. Available for purchase at pemshop.com.

American Struggle: Teens Respond to Jacob Lawrence presents the creative written expressions of more than 40 teen writers in response to Lawrence's epic series. Edited by Chul R. Kim and published by Six Foot Press and the Peabody Essex Museum, the 168-page paperback young adult book features facts on the Struggle series from the exhibition curators and vivid photographs of all the known works. Available for purchase at pemshop.com.

Exhibition Credit
Jacob Lawrence: The American Struggle is organized by the Peabody Essex Museum. Elizabeth Hutton Turner and Austen Barron Bailly are the exhibition's organizing curators and Lydia Gordon is the coordinating curator. This project is supported in part by the National Endowment for the Arts. To find out more about how National Endowment for the Arts grants impact individuals and communities, visit arts.gov. Carolyn and Peter S. Lynch and The Lynch Foundation, Jennifer and Andrew Borggaard and Kate and Ford O'Neil provided generous support. We also recognize the generosity of the East India Marine Associates of the Peabody Essex Museum.

Image Credits
1. Jacob Lawrence, We crossed the River at McKonkey’s Ferry 9 miles above Trenton . . . the night was excessively severe . . . which the men bore without the least murmur . . . —Tench Tilghman, 27 December 1776, Panel 10, 1954, from Struggle: From the History of the American People, 1954–56. Egg tempera on hardboard. Metropolitan Museum of Art. © The Jacob and Gwendolyn Knight Lawrence Foundation, Seattle/Artists Rights Society (ARS), New York.

2. Artist Jacob Lawrence with Panel 26 and Panel 27 from Struggle: From the History of the American People, 1954–56. © Robert W. Kelley/The LIFE Picture Collection/Getty Images.

3. Jacob Lawrence, . . .again the rebels rushed furiously on our men. — a Hessian soldier, Panel 8, 1954, from Struggle: From the History of the American People, 1954–56. Egg tempera on hardboard. Collection of Harvey and Harvey-Ann Ross. © The Jacob and Gwendolyn Knight Lawrence Foundation, Seattle/Artists Rights Society (ARS), New York. Photography by Bob Packert/PEM.

About the Peabody Essex Museum
Over the last 20 years, the Peabody Essex Museum (PEM) has distinguished itself as one of the fastest-growing art museums in North America. Founded in 1799, it is also the country’s oldest continuously operating museum. At its heart is a mission to enrich and transform people's lives by broadening their perspectives, attitudes and knowledge of themselves and the wider world. PEM celebrates outstanding artistic and cultural creativity through exhibitions, programming and special events that emphasize cross-cultural connections, integrate past and present and underscore the vital importance of creative expression. The museum's collection is among the finest of its kind boasting superlative works from around the globe and across time — including American art and architecture, Asian export art, photography, maritime art and history, Native American, Oceanic, and African art, as well as one of the nation’s most important museum-based collections of rare books and manuscripts. PEM's campus affords a varied and unique visitor experience with hands-on creativity zones, interactive opportunities and performance spaces. Twenty-two noted historic structures grace PEM’s campus, including Yin Yu Tang, a 200-year-old Chinese house that is the only such example of Chinese domestic architecture on display in the United States. HOURS: Open Tuesday-Sunday, 10 am-5 pm. Closed Mondays, Thanksgiving, Christmas and New Year's Day. ADMISSION: Adults $20; seniors $18; students $12. Additional admission to Yin Yu Tang: $6 (plus museum admission). Members, youth 16 and under and residents of Salem enjoy free general admission and free admission to Yin Yu Tang. INFO: Call 866-745-1876 or visit pem.org.