Perhaps in its most delicious partnership to date, PEM is teaming up with a Santa Fe purveyor of chocolate immersive experiences. Visitors to Kakawa Chocolate House on Essex Street should be prepared to both, learn about the fascinating history of chocolate, and get the boxes checked on their pleasure sensors.

Though the cobblestone streets of downtown Salem and the high desert town of Santa Fe don’t immediately seem to have much in common — apart from both being artsy and quirky — the two cities are now destinations for sipping chocolate elixirs filled with herbs, spice and zing. For people like me who love spice and feel deprived of it in New England, and so resort to sometimes growing our own peppers, there is the transportive elixir simply called Chili. This is why I’m so excited when the friendly owner hands me a spicy elixir, saying, “This one is just for you.” Or go straight for the chilis and try the whole roasted New Mexico Arbol chilis dipped in Kakawa’s own agave caramel and finished in their 80% house blended dark chocolate. 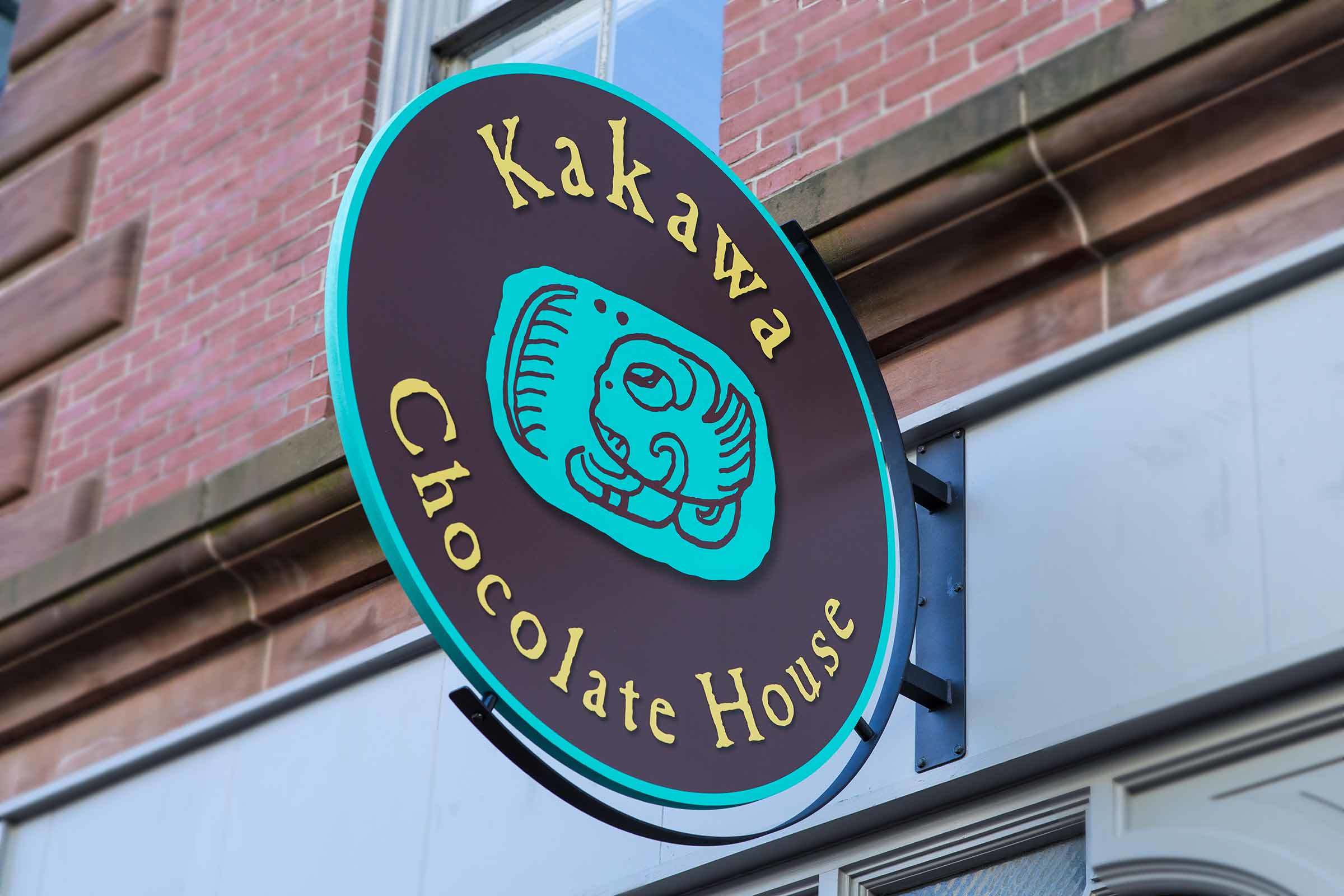 Located right next to what will be PEM’s new wing, at 173 Essex Street, Kakawa blends sixteen historic drinking chocolate elixirs, offered in rotation and all spanning the time period 1000 BC to the mid-1900s AD. 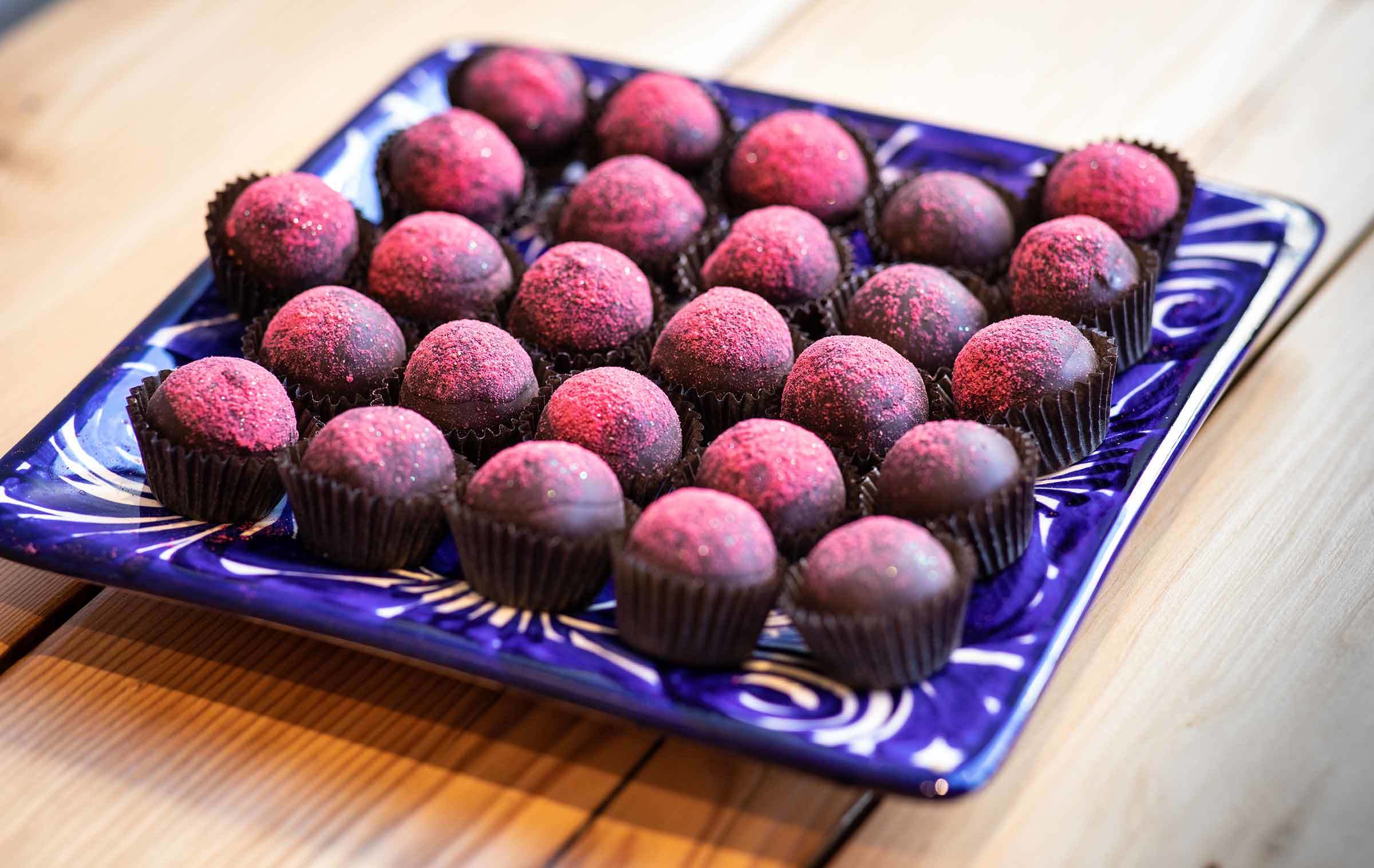 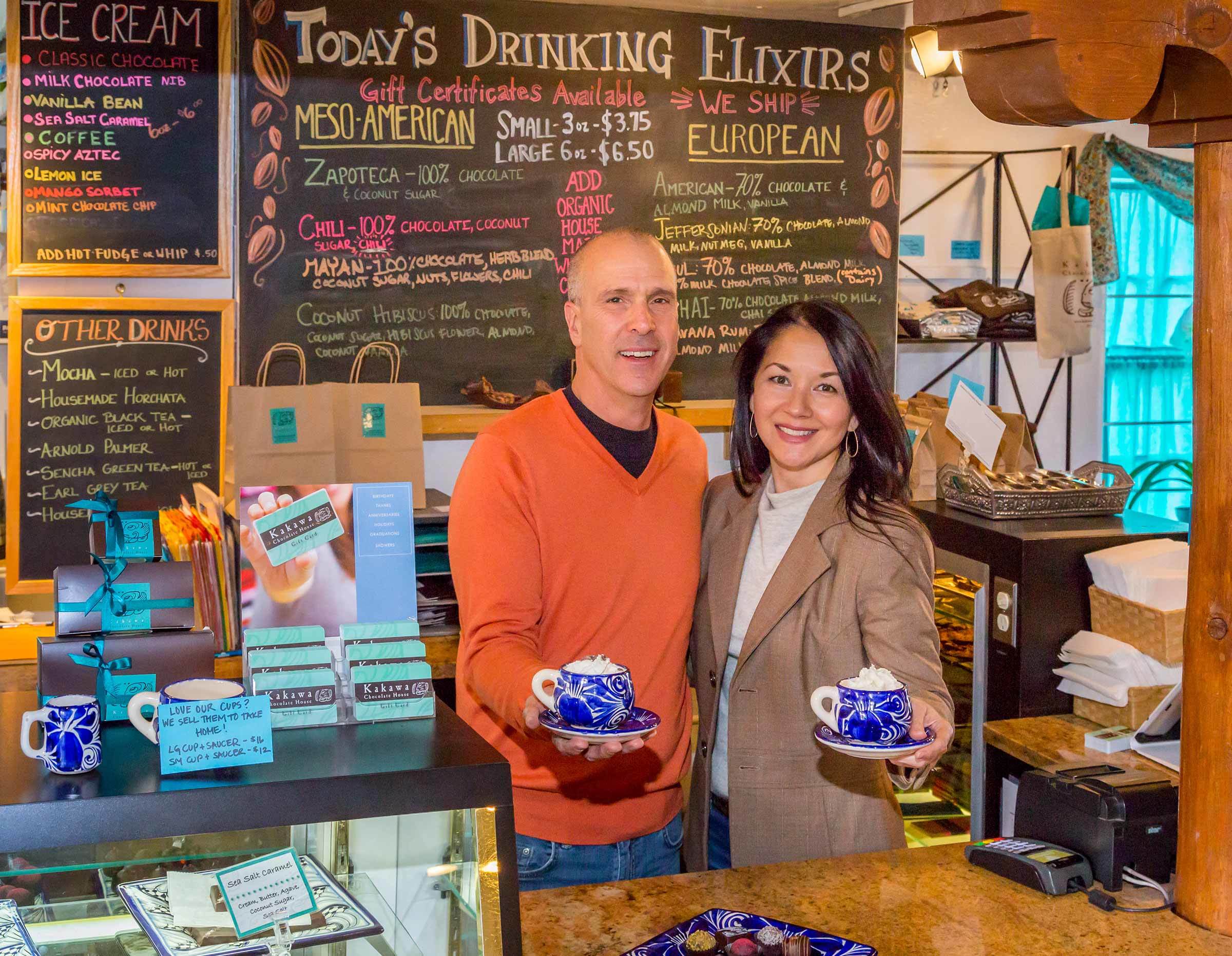 Courtesy image of the Bennetts.

Used to the old adobe building that houses Kakawa’s flagship shop in Santa Fe, the Bennetts fell in love with the historic space on Essex Street in Salem, with its original hardwood floors and brickwork. Bonnie says Kakawa and PEM have a good “synergy,” to help people understand 3,000 years of history through the lens of chocolate.

Indeed, within our vast collection are porcelain cups, made in China, meant for Europeans to enjoy sipping their chocolate, and a wooden chocolate stirrer with an ornamental handle within the Native American collection. 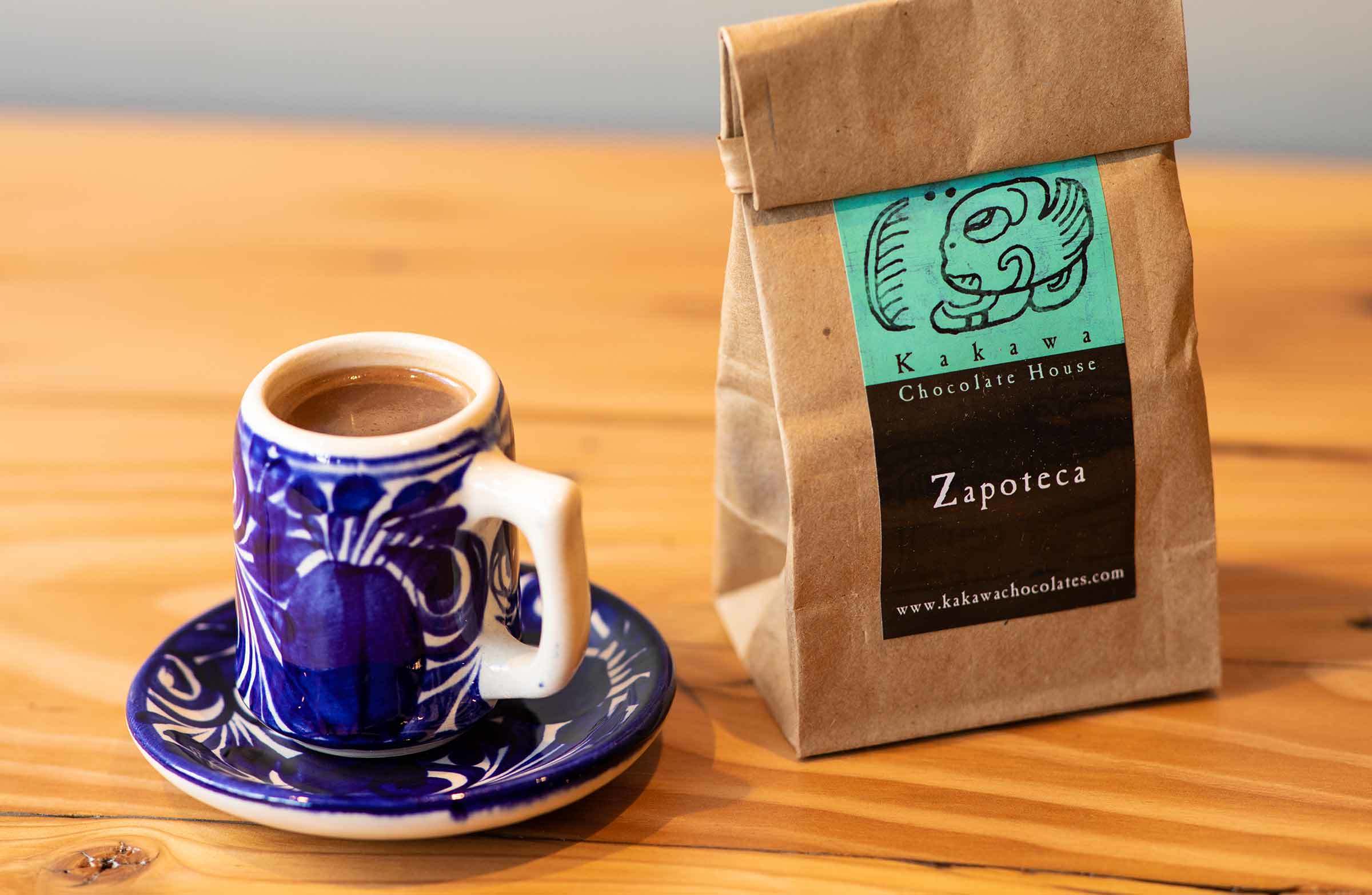 While most think of hot chocolate as sweet, milky and frothy, Kakawa’s elixirs are low on sugar and water based. Natural ingredients make them not only chocolatey, but herbal, spicy and nutty. Served out of stunning blue and white cups and saucers made in Oaxaca, Mexico, elixirs can be ordered in the tradition of Pre-Columbian, Mesoamerican, Mayan and Aztec, 1600's European, Colonial American and Colonial Mexican.

It’s not the candy bars of today or Swiss Miss hot chocolate,” says Bonnie. “We take people through almost like they are at a wine tasting, smelling the different herbs and spices and florals that come through as the chocolate is warmed.

Every time someone purchases the elixir called Tzul, the Mayan word for dog, Kakawa will give part of the proceeds to the Northeast Animal Shelter in Salem. In addition to Kakawa’s convenient location, stay tuned as museum goers can expect to see a pop-up Kakawa stand in PEM’s Atrium, starting sometime over the next few months. 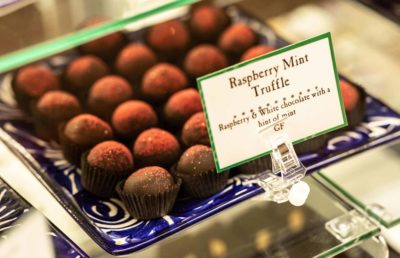 Chocolate was first consumed as a drink. That doesn’t stop Kakawa from creating a variety of contemporary elixir flavors (including dairy-free and vegan confections), include Pomegranate, Cherry-Chili and Acai, Hibiscus flower, and Mescal. Plus, the shop makes other small batch creations such as truffles, agave caramels, solid dark chocolates and delicious homemade ice cream. Solid dark chocolates are made with 80 percent dark chocolate, with roasted organic chilies from New Mexico, Mexico and a rare chili from the Northern Sonoran Desert.

Since everything is handmade, you can watch through a window as each chocolate is shaped into perfection with an exacto knife and then dusted with a small brush. Kakawa takes pride in being experimental. An accidental surplus of goat cheese recently produced a now popular savory truffle made with goat cheese and sage. The chocolate makers have had to adjust for the difference in humidity, as the shop in New Mexico is 7,000 feet above sea level. 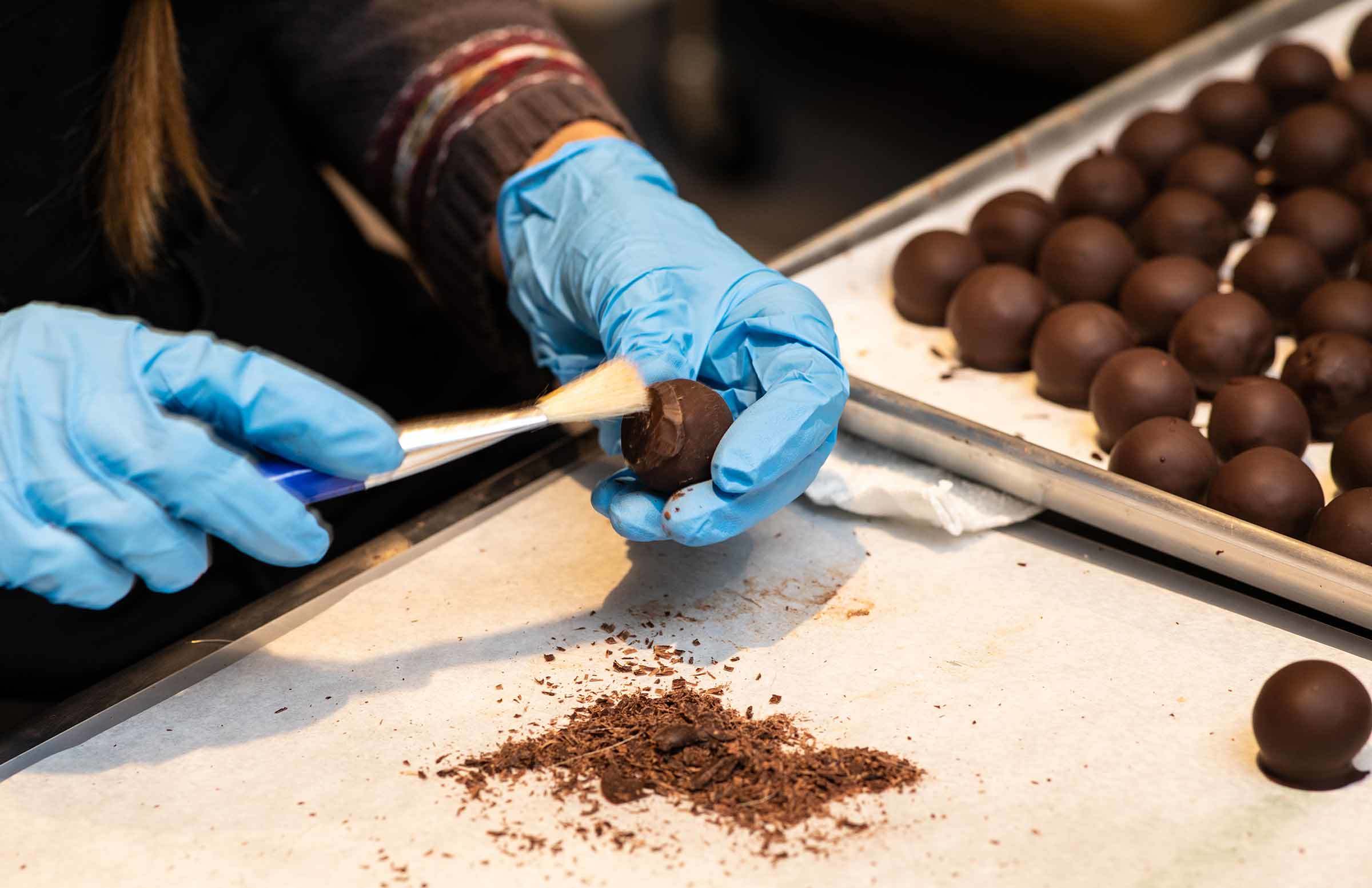 Chocolate has long been considered medicinal. If you go back in time, cacao was used ceremoniously and for its healing properties and it releases endorphins, which is why we have that feel good sensation when eating chocolate. There are studies touting the benefits of dark chocolate as a great antioxidant that opens the blood vessels. With no corn syrup or preservatives, a small amount of this chocolate is satiating. And when you’re thinking of taking that coffee break, you can go for dark chocolate instead, which contains a caffeine like agent that offers the energy and the buzz, without the post caffeine crash.

“It will perk you up,” says Tony, who says he drinks an elixir during that sleepy time of day for most of us, about 3 pm. That special ingredient in chocolate is theobromine, which opens the blood vessels and causes a euphoric feeling. Tony explains, “That’s why chocolate has been popular for so long.” For about 3,500 years long. If you feel a cold coming on, try the Mayan, made with unsweetened 100% Chocolate, Coconut Sugar, Herbs, Flowers, Nuts, Spices, Chihuacle Negro Chili and Mexican Vanilla.

The Bennetts come from a background in fashion and it was the sterling silver jewelry of Santa Fe that first took them out west. It was during the Indian Market, the prestigious two-day art show hosted in Santa Fe every August since 1922 by the Southwestern Association of Indian Arts (SWAIA), when PEM guide Catherine Wygant discovered Kakawa.  Right away, “the intellectual aspect” of Kakawa appealed to her, says Wygant, who, as a chocolate connoisseur, collects the wrappers from every piece she’s eaten, going back to 2003. She has saved the drinking chocolate bags purchased from Kakawa and is making them into an art book, along with her other wrappers. Wygant mostly enjoys the Jeffersonian, named for Thomas Jefferson, who was one of first Americans to bring chocolate elixirs to the US, after being introduced to them in the French court while serving as Ambassador to France.

Shortly after discovering Kakawa herself, Wygant took her chocolate skeptical husband, PEM’s Executive Director and CEO, Dan Monroe, and PEM’s Board of Trustees President, Rob Shapiro, into the shop. The group emerged back onto the street with a new outlook on chocolate and a new vision for a potential partnership. It turned out the Bennetts were hoping to open another location. And the rest is history. 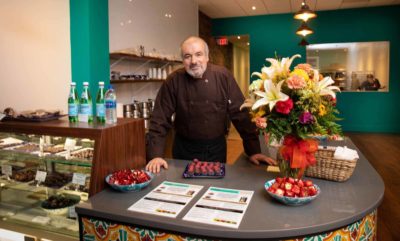 A pastry chef, Delphin Gomes has worked with chocolate for 35 years. Photography by Bob Packert / PEM. 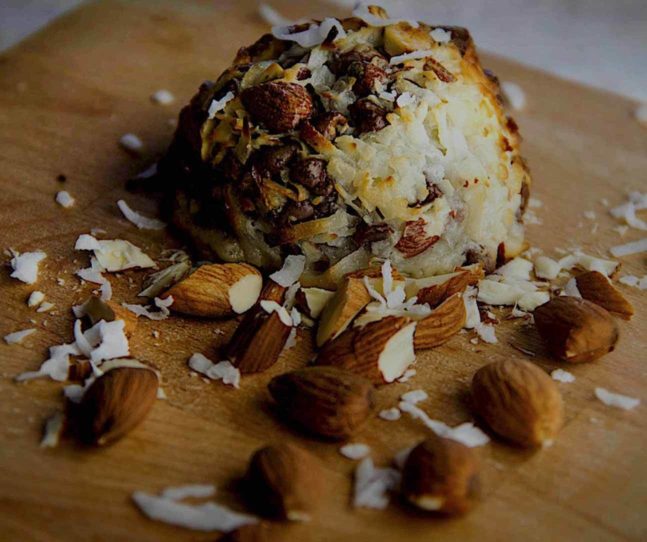 History in the Baking 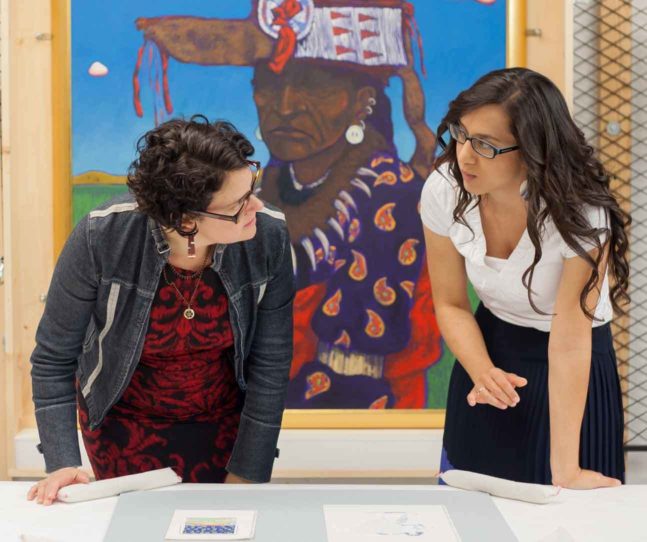 Window into Preservation
Performing inside the Soul House