As a curator, I love nothing better than finding artists or projects that can capture imaginations and connect deeply with the life of a community. With the recent COVID-19 pandemic, this ambition has taken a more complicated turn for me.

Over the last decade, artists have given us many uplifting moments at PEM, whether immersed in the sonic landscape of zebra finches and guitars in Céleste Boursier-Mougenot’s From Here to Ear or watching Theo Jansen’s Strandbeests magically walking on the wind. Sometimes works have involved community participation, such as when 50 volunteers helped Patrick Dougherty weave his magical Stickwork structures in front of PEM’s Crowninshield-Bentley House in 2015.

From Here to Ear finches. Photo by Kathy Tarantola/PEM.

More recently, Kimsooja’s Archive of Mind invited you to engage in a moment of meditation while rolling a clay ball, our individual offerings accumulating into a portrait of communal energy and attention. Sometimes, artists’ work has resonated in unexpected ways. After the Boston Marathon bombing in 2013, for example, Nick Cave's Soundsuit invasion provided the perfect occasion for us all to dance and heal together.

Archive of Mind in action. Photo by Bob Packert/PEM.

As I have watched the COVID-19 pandemic grow, I have been fighting off an altogether more queasy form of artistic memory. You see, because of my work at PEM, I was invited to participate on a team at the Mütter Museum in Philadelphia, the first medical history museum in the United States, to develop a project about the impact of the 1918 flu pandemic. Through the military effort toward the end of the first world war, that city’s population had swelled to around 2 million people. Then, as now, public health impacts and political calculations were not always in easy alignment.

A decision in 1918 to proceed with a fundraising parade for the war effort despite the presence of the flu resulted in 200,000 people flooding into Philadelphia’s streets. The flu spread like wildfire and within six weeks more than 12,000 people had died, and over six months some 17,500 had passed away. That pandemic was caused by the then newly emergent H1N1 strain, which was one of the strains targeted by this year’s flu shots. In the fullness of time we will no doubt have vaccines available to us for COVID-19, but it will come too late for this particular outbreak.

I was excited to work on the Mütter Museum project with an interdisciplinary team that included several museum staff, a historical curator, a historical epidemiologist and Blast Theory, a collective of artists renowned for creating interactive artworks that explore social and political questions. We created an exhibition entitled Spit Spreads Death, its title drawn from a public health proclamation emblazoned on posters that were installed throughout Philadelphia in 1918. The exhibition looked at the pandemic from many different historical angles but one central task was to connect the impact of this historical event to contemporary audiences. 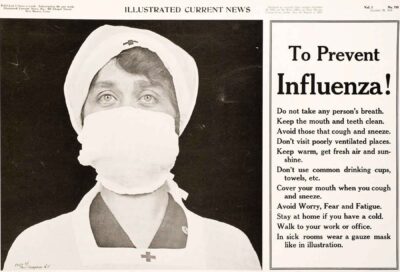 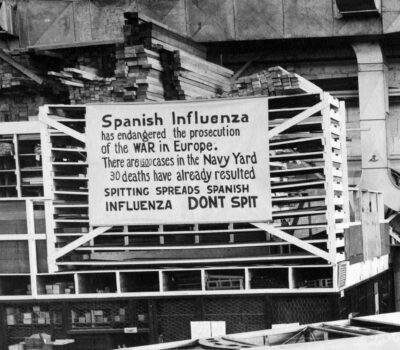 Influenza precaution sign at Naval Aircraft Factory, Philadelphia Navy Yard, 1918. From the Naval History and Heritage Command, Washington, D.C. © The Mütter Museum of The College of Physicians of Philadelphia.

As we were working on Spit Spreads Death, the lack of memorials to the victims of the flu pandemic struck us deeply. There are war memorials in every town in the United States, but almost nothing to memorialize the pandemic, despite a loss of life that far exceeded those killed in both the first and the second world wars. We decided that it was the health workers who were our heroes, then and now. They labor tirelessly, sometimes under impossible conditions, to keep us safe.

Because the impact of the flu in Philadelphia had been greatly exacerbated by the 1918 Liberty Loan Parade, we decided our memorial should mirror that event. Last September, over 500 people walked the length of Broad Street in Philadelphia following the original parade route, to honor our present-day health workers as well as the victims of 1918. People signed up online and chose an individual to honor. Some chose by neighborhood or occupation. We carried our chosen names on a simple placard designed in plainspoken manner to evoke the Spit Spreads Death posters. I chose Olga Pruss, a young seamstress, because that is my wife’s chosen profession. You can see an excerpt of the video of Blast Theory’s parade here.

There will be plenty of time to see the full video in the Spit Spreads Death exhibition once we get through our current medical crisis as it will be on exhibit for the next five years.

You can follow how the 1918 flu progressed through the streets of Philadelphia in this explorer interactive and this animation interactive.

Among the many personal impacts on me were that I was compelled to get my first ever flu shot (at a pop-up stand after the parade). While the flu shot only covers the most likely strains of flu in each year, it does contribute to herd immunity. None of this, of course, protected people against COVID-19 in the massive crowds gathered at political rallies, on beaches in Florida or racetracks in London this spring. By that time, the ghosts of Philadelphia were too present in my head to ignore their whispered warnings. 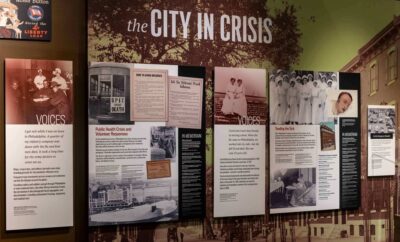 Spit Spreads Death: The Influenza Pandemic of 1918-19 in Philadelphia. © The Mütter Museum of The College of Physicians of Philadelphia. Photo by Constance Mensh.

Even now that so many people are isolating to the extent possible, I welcome the cold blustery mornings when I can walk my dog around a more-or-less unpeopled Salem Common. On warm afternoons, I tend to stick to the side streets. Thankfully, we are at a point in this pandemic cycle where our need for self-protection and our duty to do the right thing for our community are finally not seen as being in competition. We all must keep isolating ourselves until this storm passes.

By doing so, we minimize the damage to ourselves, our community and our economy. We are not as helpless as in 1918 as we have simple techniques to protect ourselves. Plus, more of us can self-isolate. And we can console ourselves online and by staying in touch from a distance. I hope that when this event passes, all of us at PEM can play an even more impactful role in your families’ lives and that we can welcome one another back into our collective presence. Be safe everyone!

Editor’s Note: For more on the pandemic from 1918, see this recent story in The New York Times and more about the exhibition in this story from the spring museum section. 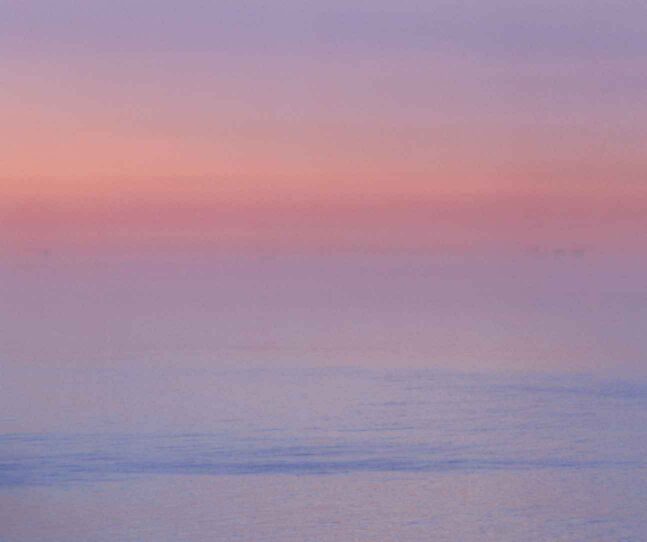 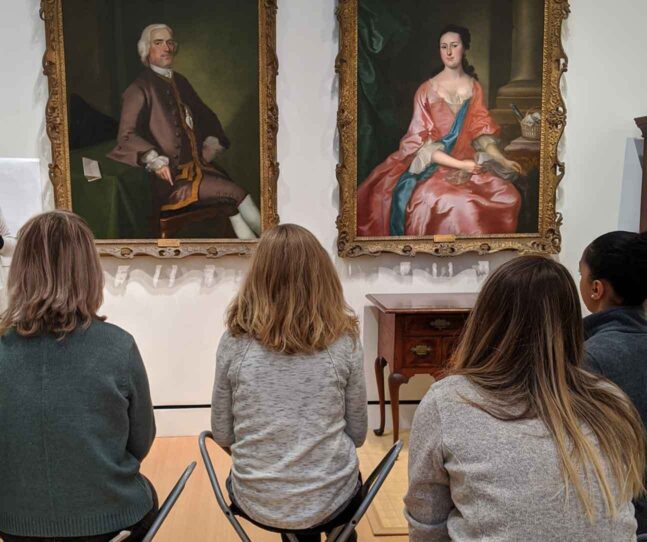 From paint to patient 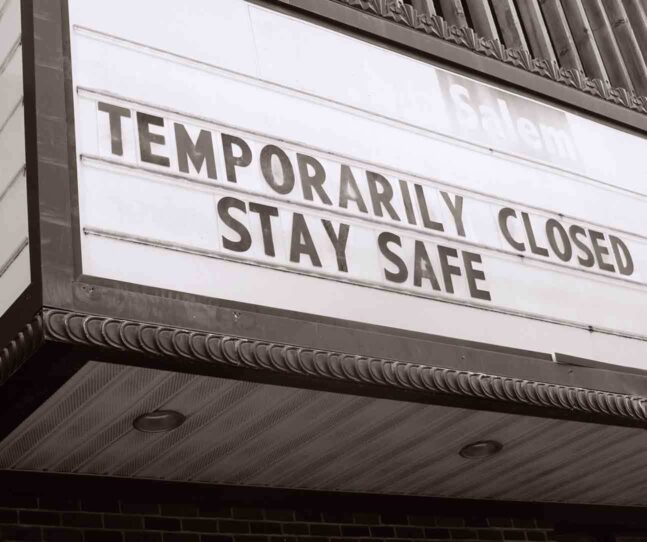 The comfort of our collection
From paint to patient