After a few minutes of flipping through a box at a shop in Essex, I picked it up: a simple view of the Old State House in Boston with a slightly scorched edge. It was my first card. I started a few years ago, picking up postcards from various places along the North Shore of Massachusetts, focusing my purchases on prints on local places I knew well and on certain print eras. With a background in History, I revel in seeing places from a past perspective and am instinctively drawn to the dusty and worn.

I had not considered myself a “collector” until recently, when I noticed my overwhelming lack of wall space. Deltiology is the term for postcard collecting and it is apparently the third most popular form of collecting in the world. The practice of both writing and collecting postcards has not dissolved with time. Postcards are seeing a new life within the pages of New York Times bestsellers, blogs and various museum exhibitions like PEM’s American Impressionist: Childe Hassam and the Isles of Shoals. 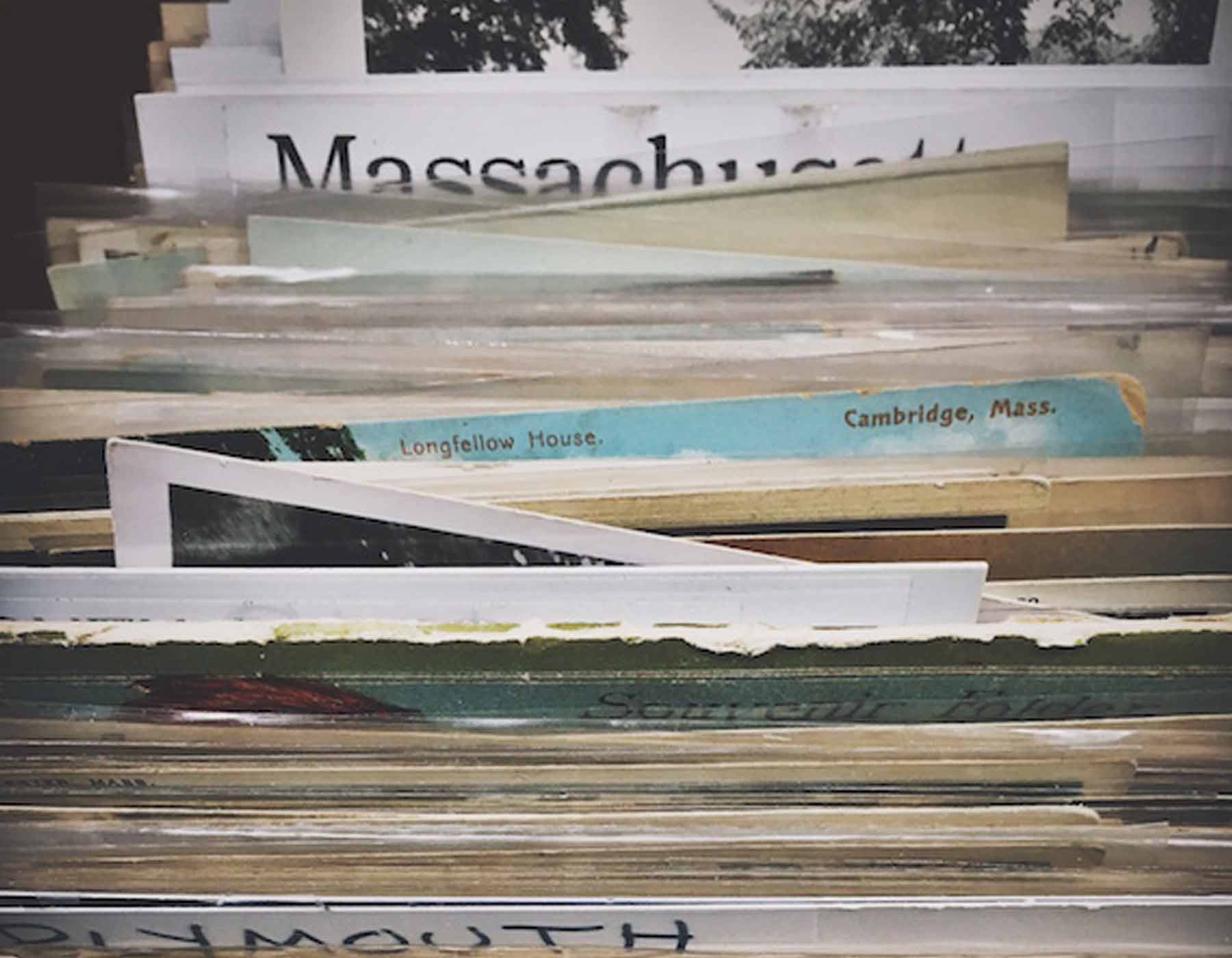 Drawer of various Massachusetts postcards for sale at an antique shop in Salem, Mass. Photo by Paige Besse. 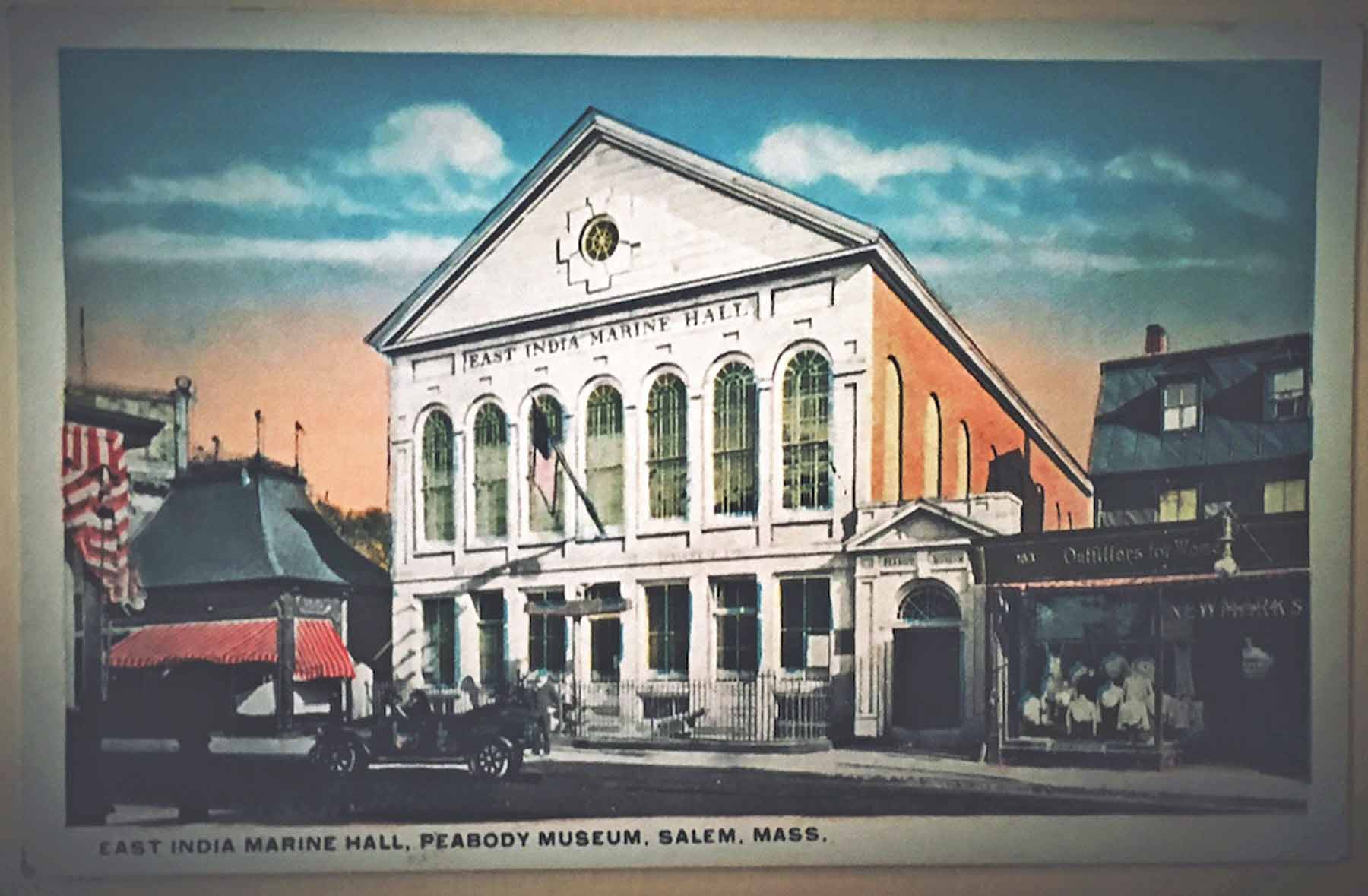 Through the glass doors of the exhibition, rounding the walls specked with bold hues and gilded frames, sits a wooden table. The hope is that Hassam’s works will inspire visitors to sit at the table, pick up a pencil and share their thoughts on a postcard. In case the artwork does not spark a message, a sign prompts: 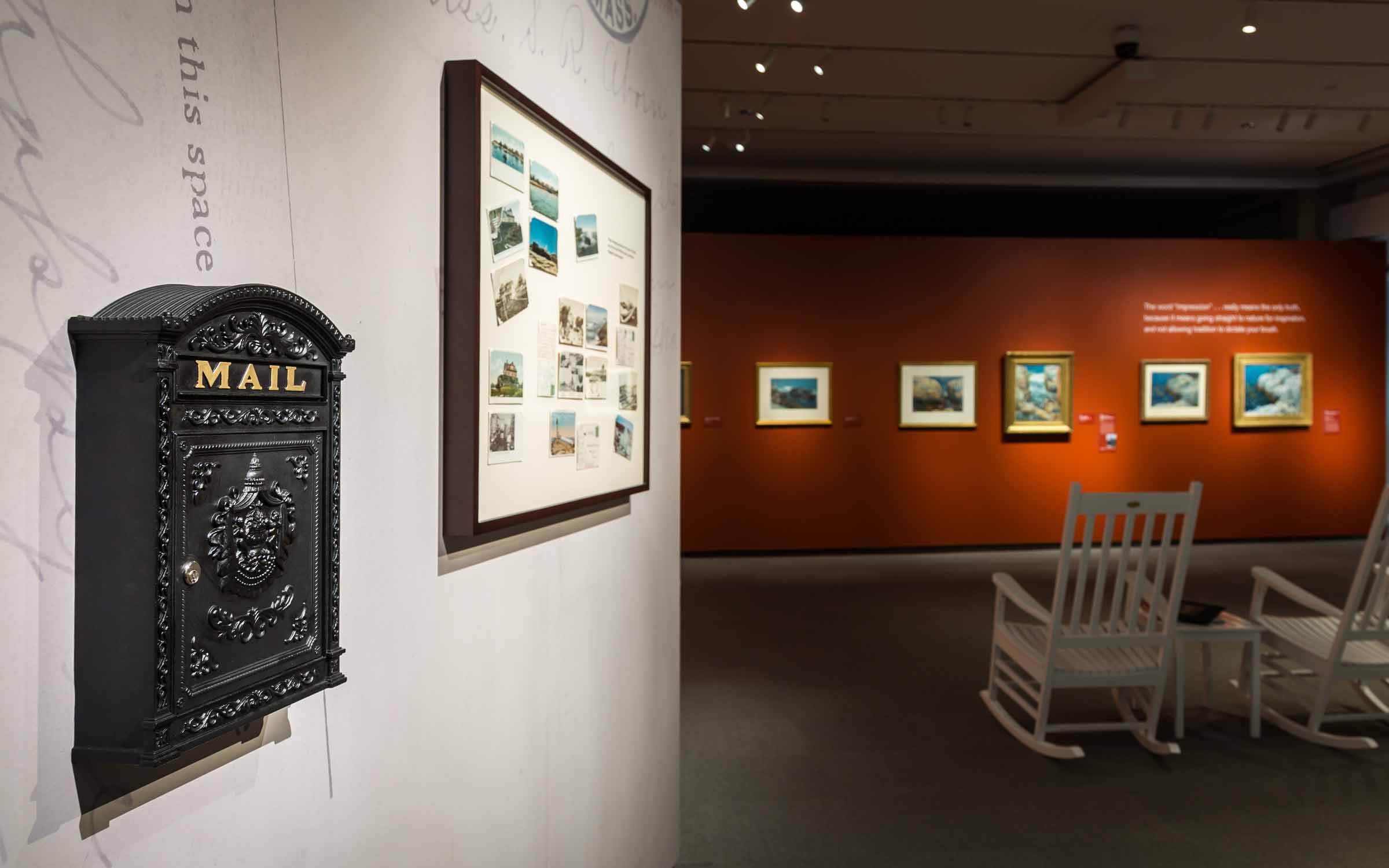 The mailbox and small display of postcards (ranging in style/date) in the American Impressionist exhibition at PEM. Photo credit Allison White.

The mailbox is rarely empty and the postcarding table continues to garner amazing attention. I have heard of partners secretly sending a card while their counterpart was immersed in the exhibit and of groups of college students all enthusiastically sitting to create their own, never having sent a postcard before. However, there is another side to all of this and it derives from the messages left willingly behind for our exhibition scrapbook. The truth is, these postcards each hold entirely different stories. 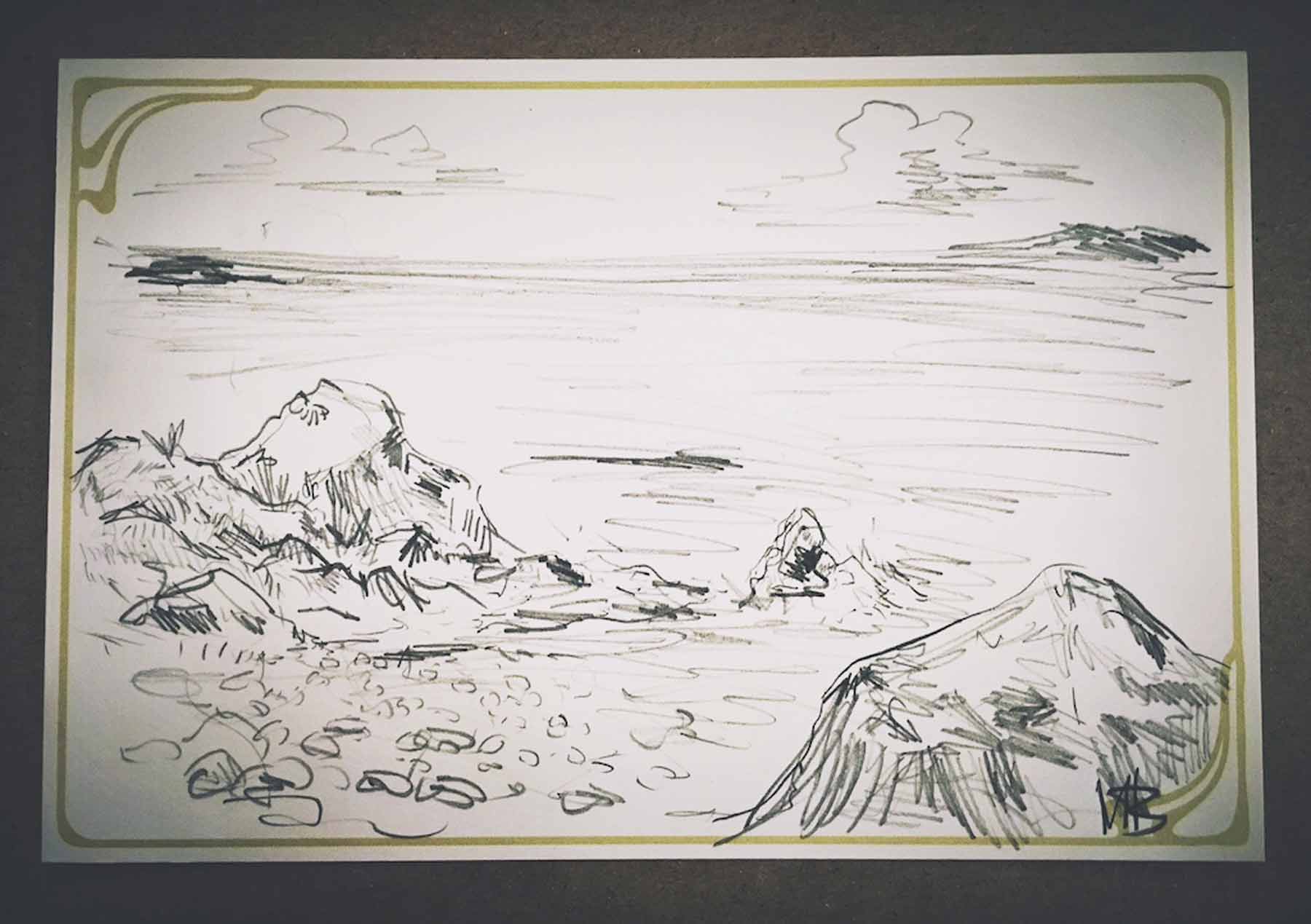 Doodled landscape on postcard left for the scrapbook. Photo by Paige Besse.

It became hard to pick and choose just which of the scrapbook-meant cards to feature here. From our neighbors here in Salem to visitors from Maine and Spain, and even a crew member of The Hōkūle‘a, each card deserves its five minutes. However, when it came down to it, I found myself drawn to the heartfelt messages, anonymous notes, charming doodles and signature-less drawings scattered within the stack. They are not only captivating, but represent the evolving identity postcards have experienced throughout recent history. 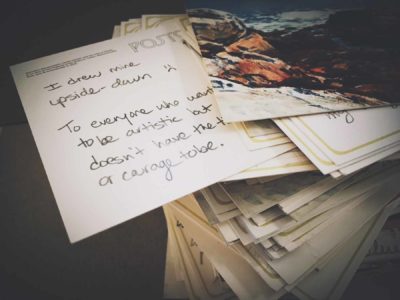 Postcard reads, “I drew mine upside down :( To everyone who wants to be artistic but doesn’t have the time or courage to be.” Photo by Paige Besse.

Postcard production and the act of “postcarding” became most prominent between the late 1800s and early 1900s, with the “Divided Back” era of 1907-1925 being regarded as the “Golden Age.” There are claims that hundreds of millions of cards were mailed across the country during this period. During these years, postcards functioned as everything from advertisements, to mementos and as general greeting for friends and family. To contextualize the range of purpose these cards served, I have a card in my personal collection from someone writing simply to tell a friend they have an upcoming dentist appointment.

Postcards have since become valuable resources for historical societies and libraries, where the cards are used to research and document changes made to historical structures or genealogy. And while postcard production has persisted steadily throughout the years, the use of cards has transformed entirely.

The writing of postcards has experienced a recent renaissance through mediums such as PostSecret, an ongoing community art project created in 2005 that encourages people to mail in their secrets anonymously via postcard. The ability to freely communicate thoughts without consequence or judgment quickly caught on. Many have begun sharing outside of the PostSecret realm, delivering their messages to whomever will read by leaving them to be found in library books or public places. Through these sort of initiatives, postcard writing/sending has taken on a new facet as an outlet for creative, personal and emotional expression.

This cathartic use of postcards has found its own place within the walls of the American Impressionist exhibition, producing something fascinating and uniquely PEM. To date, it is estimated that somewhere around 9,548 postcards have been mailed from the exhibition here at PEM. As Brian, our king of mail, said, “It is a world wide phenomenon.” 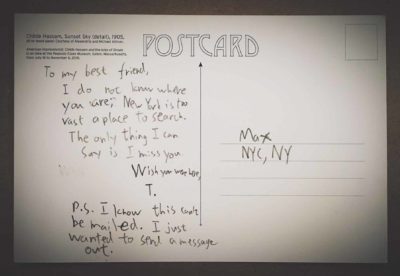 Postcard reads, “To my best friend, I do not know where you are; New York is too vast a place to search. The only thing I can say is I miss you. Wish you were here, T. P.S. I know this can’t be mailed. I just wanted to send a message out.” Photo by Paige Besse. 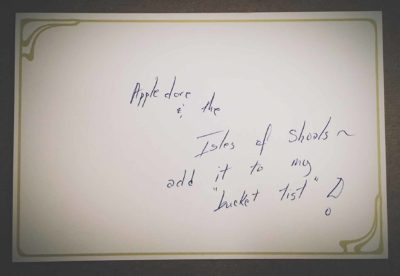 This side reads, “My heart is not here. August 7, 2016. To: Whoever cares to read…” Written on the opposite side is, “Mr. Hassam reminds me that I am not home. I am not where I belong. I am somewhere between my home in Louisiana and my final destination. All this bustle, these crowds, the running around like chickens with your heads cut off – as we say. It is not home. Yet it is time to find my way home.” Photo by Paige Besse. 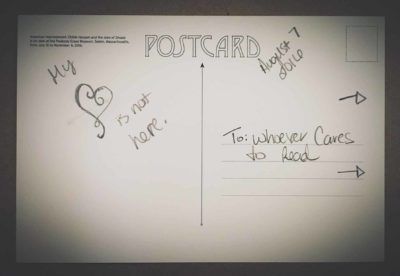 Postcard reads, “Appledore and the Isles of Shoals – add it to my ‘bucket list!’” Photo by Paige Besse.

So, Connected reader, if you find yourself in the exhibition, stop at the wooden table to send a message to someone in particular, leave the exhibit some love or just put your message out into the world… No postage required.

Exhibition curator Austen Barron Bailly said, “We’re hoping that people will feel inspired to share their experiences or their responses to Hassam’s art with the world.

We also appreciate those of you leaving postcards, containing your thoughts and your secrets…for us to discover.