For the second time in as many months, I found myself in New York City with an object. On the first trip, I acted as courier, accompanying a recently conserved ship figurehead from PEM’s collection to the New-York Historical Society where it was installed in a precisely designed case. More recently, I supervised the packing of a massive and fragile new acquisition: a 93-inch-high armoire that needed to travel down an 88-inch-high freight elevator. Both experiences involved creative thinking to get myself (and some art) out of a tight place.

Although not soldiers, many registrars might characterize courier trips as “long periods of boredom punctuated by moments of extreme terror. 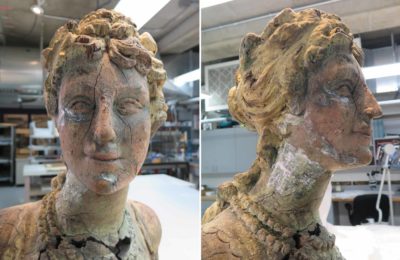 With the figurehead, the unexpected happened a few months before the object found itself at the New-York Historical Society, waiting to be installed in Saving Washington. Unbeknownst to me, casework was being designed based on dimensions that did not properly represent how much space the object occupies. Although the depth measurement we had on our documents was accurate, the casework did not account for the fact that a figurehead extends forward into space. The depth required of a case is not simply the depth of the figurehead itself, but the distance from the back of the object to the front when situated on an angled plinth.

I won’t deny the moment of panic when we discovered that the object simply wouldn’t fit in the vitrine as designed. Nor could the case be enlarged to our very generous, there-is-no-way-that-there-will-be-any-problems-with-something-this-size measurements.

Instead, we provided the designer with a series of annotated images of the figurehead installed and hoped for the best.

The figurehead, I should note, is a wonderful object (as you can imagine, it is often our most wonderful objects that are asked to travel). Most likely carved around 1805 by Simeon Skillin, Jr. of the Skillin family of ship carvers active in Boston in the nineteenth century, she represents a female figure with an empire waist gown and beautiful flowing curls. In preparation for this loan, she was given a thorough cleaning — of her face with some attention paid to her hair — by our objects conservator, Mimi Leveque. The cleaning removed a greenish cast and even revealed a wreath on her head.

The figurehead has been part of the collection at PEM since the 1990s, but she had a prior life as a garden ornament and for this reason (and the fact that she began her life on the front of a ship), she had been heavily repainted.

The conservation also prepared the friable underside of the object for a new mount. In this way, not only did the treatment make her more aesthetically pleasing, but it also increased her stability and made her safe to lend. 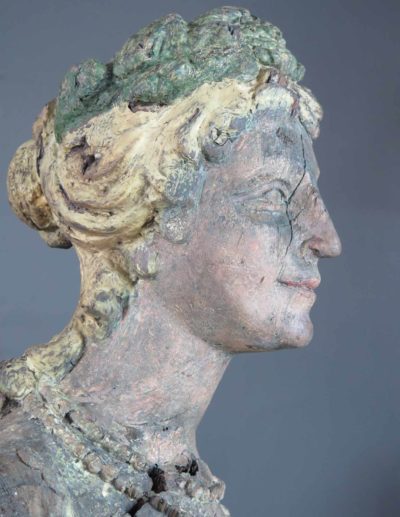 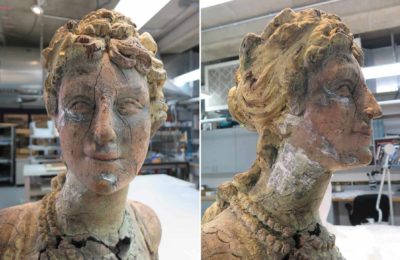 It was, therefore, with great relief that I watched the art handlers at NYHS attach the figurehead to her plinth (another moment of terror when it seemed as if the bolts were too long), slide her into the case constructed from our measurements and attach the acrylic front. She fit. And so…I left her in the company of George Washington and Alexander Hamilton where she will stay for the next few months. 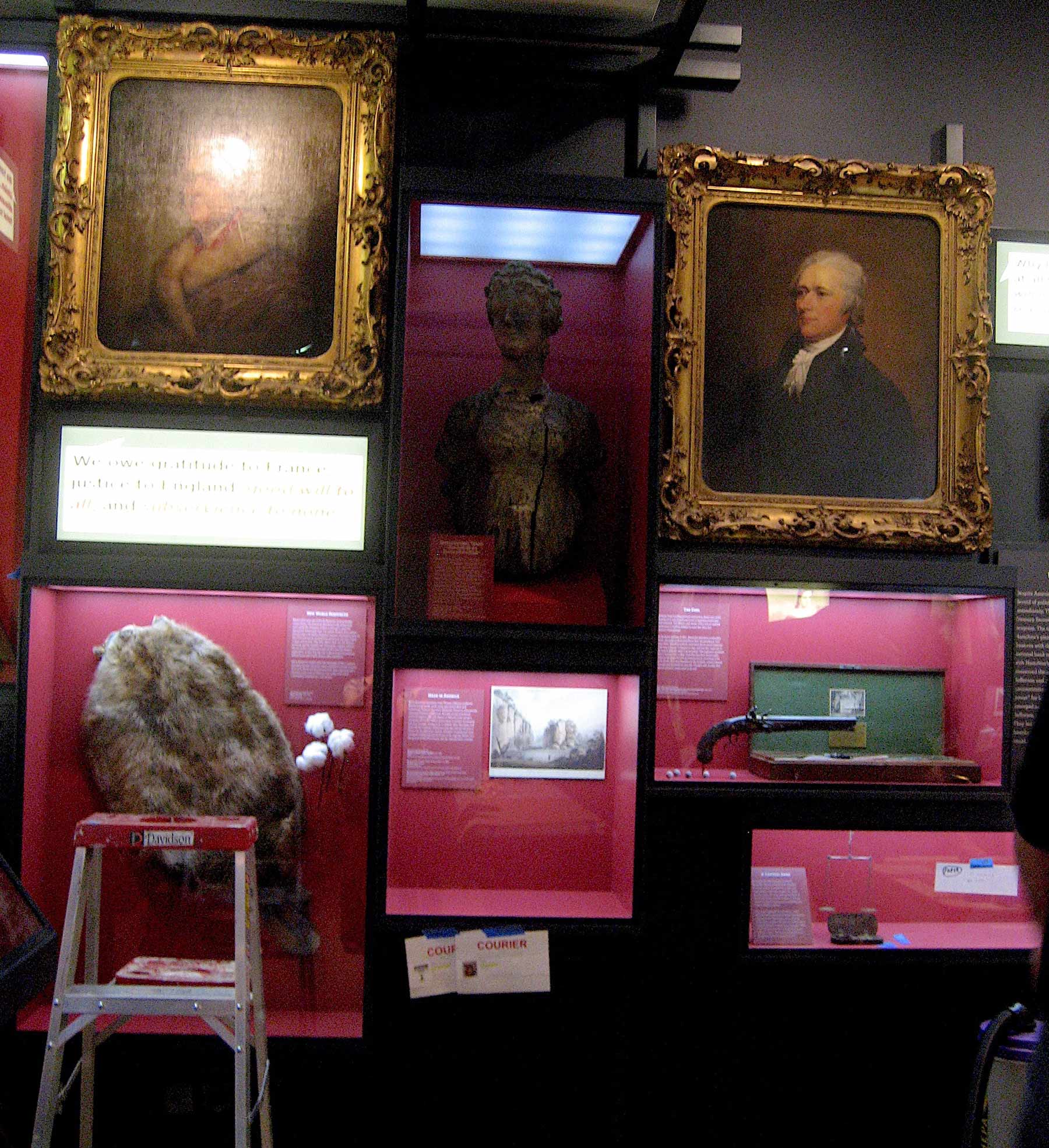 Another wonderful object, a new acquisition, came from a tiny, sixth-floor Manhattan studio. Constructed of foam core, epoxy, papier-mâche, and Gorilla glue covered in paint and sand, Shipwrecked Armoire with Barnacles, looks like a piece of early American furniture that was washed onto a beach after spending quite some time under the sea.

Fortunately (and also unfortunately), it is not made of wood. This means that it is very lightweight (good), but also fragile (not so good) with an uneven surface that is sensitive to abrasion.

The Armoire consists of three pieces and we knew that all three of them could be removed from the tiny studio where we found them because they were created elsewhere and brought to the studio. Of course, it is one thing for an artist to move her work and quite another for museum people to move a museum object.

Packing the two smaller side pieces was not without its challenges. One of them, for example, is heavily distressed on one side and had to be secured primarily on the other side, which was more structurally sound.

But the real difficulty was the center piece with its impressive height. The box designed for it should have fit in the elevator, that is, if we could have magically beamed it into the cabin.

The turning radius required by the height and depth and the narrow delivery entrance meant that we had another case of an object needing more three-dimensional space than what its measurements would imply. In the end, we had to do a modified (hopefully improved) version of what was probably done to get the piece to the studio in the first place, wrapping it in special plastic and cushioning it with bubble-wrap and foam for transit to the fine art warehouse where the full packing could be completed. Even this was not without its moments of terror. It was raining. Hard. Enough said. 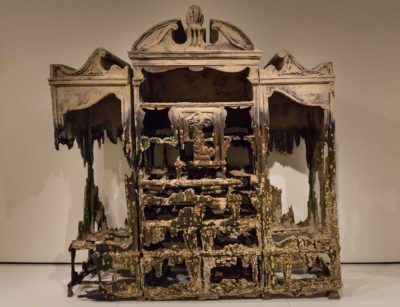 In the end, though, it is the something unexpected for which the registrar gladly accepts all the waiting in the first place.

If things were guaranteed to go completely as planned, we wouldn’t need boots on the ground.

We do our best to eliminate the element of surprise – assuming nothing, verifying everything and devising several contingencies in advance – but sometimes we still find ourselves in a tough spot. For me, at least, the problem solving inherent to the job is part of the appeal.

So, the next time you see something in a case or an eight-foot object commanding a gallery (Shipwrecked Armoire with Barnacles will be on view in Nancy and George Putnam Gallery beginning April 11, 2017), marvel, if you’d like, for a moment at the ingenuity that got it there. There might have even been blood, sweat and tears (though not on the objects).

Asian Gardens at the Phillips Library
The astronaut and the artist