Before Jacob Lawrence ever put paintbrush to panel, he spent five years conducting research for what would become one of his most ambitious bodies of work, Struggle: From the History of the American People. This 30-panel narrative epic sought to tell a version of American history that was more complete—and more complex—than had been previously known or told. Lawrence wanted his project to celebrate not just the victors and their triumphs, but also the messy reality and lesser-known incidents that contributed to America’s founding and struggle for democracy.

Original research was essential to Lawrence’s process and he spent countless hours at the Division of Negro Literature, History and Prints, a special collection area at the 135th Street branch of the New York Public Library in Harlem (today known as the Schomburg Center for Research in Black Culture). He took the subway from his home in Brooklyn to the library where he pored over historical texts that included first-person accounts, coded messages, and letters from a diverse array of historical players including women, Native Americans, and black people. 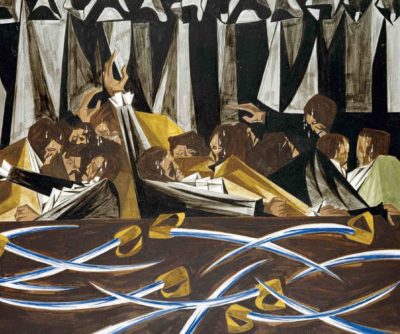 In May 1954, just as the modern Civil Rights movement was gaining momentum, Lawrence began to paint. The resulting works are reunited and now on view in Jacob Lawrence: The American Struggle, an exhibition organized by PEM that will make a five-stop national tour through 2021.

To honor the importance of library research in Lawrence’s creative process, PEM’s exhibition designers created a midcentury library experience within the gallery. Dark stained oak tables and chairs and classic library carrels invite visitors to slow down and take a seat with the same research materials that Lawrence studied nearly 70 years prior. Original texts, including Secret History of the American Revolution (1941) and Westward America (1942), accompany a light table for viewing news clippings and a card catalog that stores visitor responses and feedback. 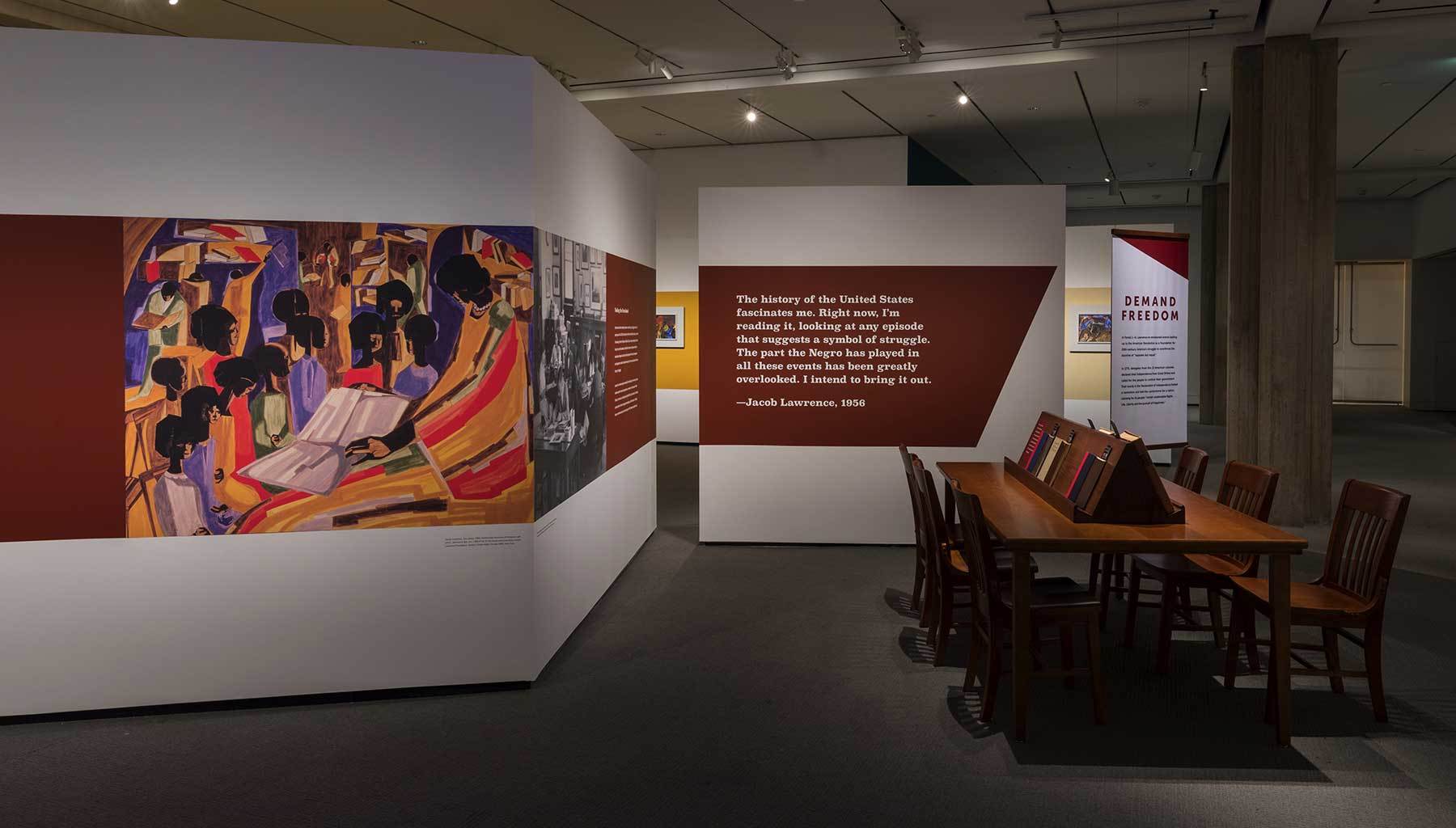 Jacob Lawrence, The Library, 1960 on the wall of the installation of Jacob Lawrence: The American Struggle. Photo by Kathy Tarantola/PEM.

In an interview conducted for the Smithsonian Archives of American Art, Lawrence called the Schomburg Library “one of my favorite places to go.” The library played a critical role in his growth as a painter, and, in many ways, as a person.

There’s always more than meets the eye in Lawrence’s work. There is a layering of 18th-century primary source material, Lawrence’s mid-century American history books, and prevailing cultural references of his day,” says PEM’s associate curator and exhibition coordinating curator, Lydia Gordon. “Not a brushstroke was made without intentionality and careful consideration of how history would, in turn, view his efforts.

In Lawrence’s 1954 application to the Chapelbrook Foundation seeking support for the Struggle series, he included a bibliography “of popular and pictorial histories...to demonstrate accepted versions and common omissions in American History” and referenced “about three hundred items and pictures which I have clipped from newspapers and magazines and, which I am using as reference material for this project”. His clipping file emulates an established practice at the Schomburg Center, whereby librarians and patrons cut out periodical and newspaper articles relevant to black history and culture; these were then organized and pasted into albums by subject. 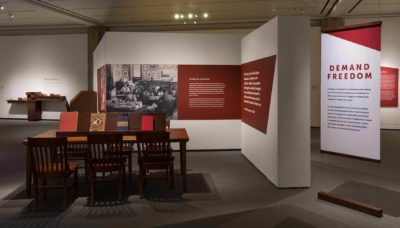 In 1938 researchers read newspapers and periodicals, cutting out articles relevant to black history and culture to organize and paste into albums, known as clipping files, for the 135th Street Branch of the New York Public Library. Image featured on the wall of the installation of Jacob Lawrence: The American Struggle. Photo by Kathy Tarantola/PEM.

As ecosystems of knowledge and information, libraries have the potential to inspire and unlock new ways of seeing and being. Lawrence knew this acutely and so, too, do artists, Derrick Adams, Bethany Collins and Hank Willis Thomas, whose works are featured as a contemporary counterpoint in the exhibition to powerfully assert that America’s struggles — for democracy, justice, truth, and inclusion — continue in earnest today.

Thomas grew up exploring the stacks of the Schomburg Center where his mother, art historian Deborah Willis, served as curator. Many of his artworks are inspired by visual archival materials including those he discovered at the library. PEM’s exhibition includes a lifesize sculpture, Rich Black Specimen #460 (2017), which uses 19th-century imagery of a runaway slave as its source material. Two additional works, My Father Died for this Country Too / I Am an American Also (2017) and Turbulence (2018), transform archival photographs from the Civil Rights era by covering them in retroreflective vinyl. The images may only be revealed when a direct light, such as a flashlight or camera flash, is shined upon it. 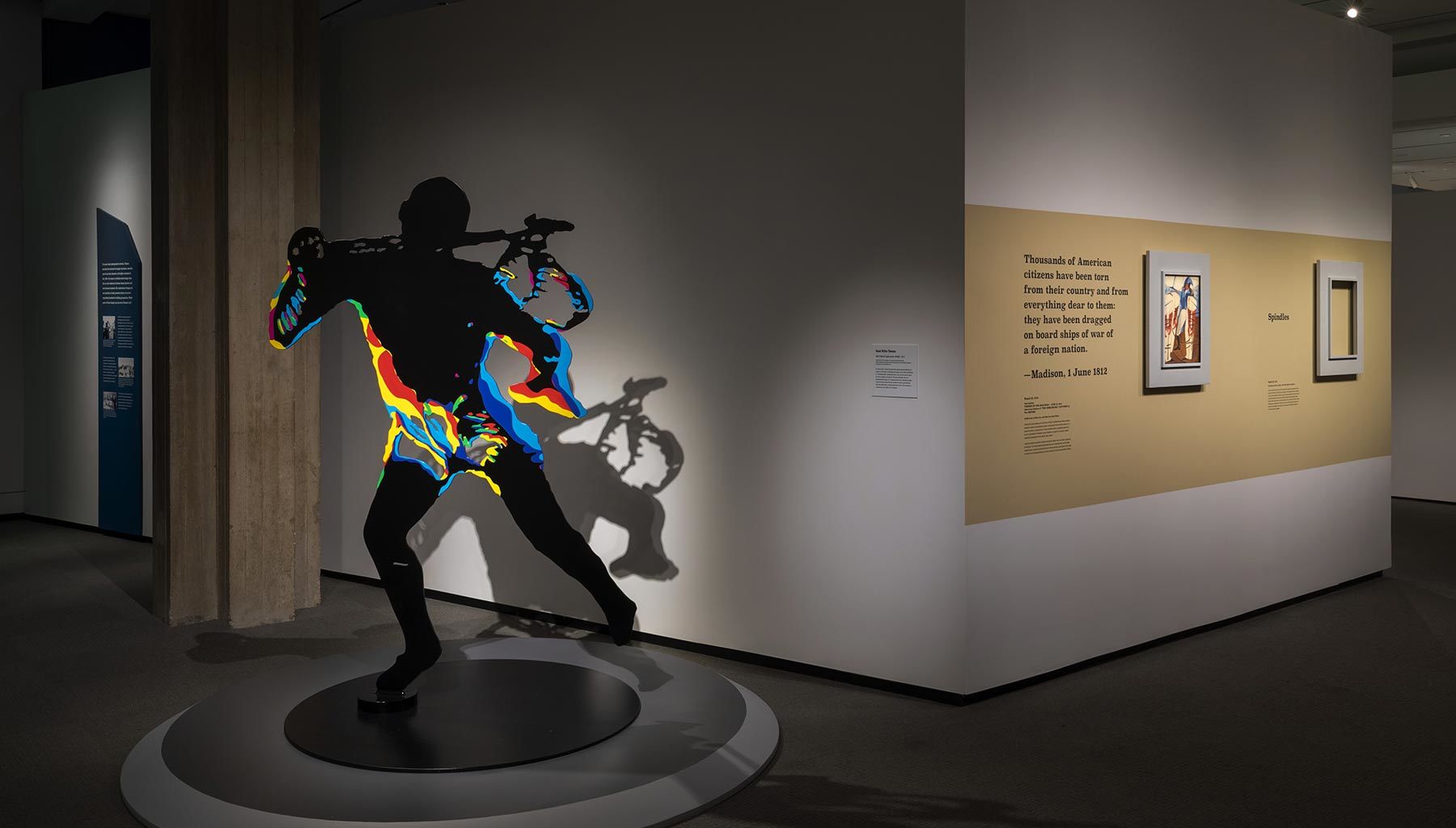 Bethany Collins’ America: A Hymnal (2017) is a laser-cut special edition artist book that unifies 100 versions of “My Country 'Tis of Thee” to show how words and meanings of this song have changed over time. Between the 18th and 20th centuries, songwriters rewrote the lyrics to the melody of in support of varying American causes, including revolution, temperance, suffrage, abolition, Native sovereignty, and slavery. Collins studied historical songbooks and glossaries to create this artist book, an edition of which was recently acquired by PEM’s Phillips Library. In the exhibition, Collins’ work is presented alongside another object from the library collection: a first edition hymnal that features the first known publication of “My Country 'Tis of Thee” which was performed at Boston’s Park Street Church in 1832. 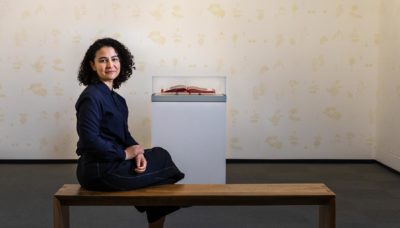 For Derrick Adams, whose works Saints March (2017) and Jacob’s Ladder (2020) are featured in the exhibition, a library was responsible for setting him on his life’s course. He explains: “As an art major during my first semester of community college in Baltimore, I was assigned to write a paper on any artist and his or her work. While exploring the art section of the public library, I was struck by these amazing and vivid images throughout a book that had grabbed my attention. The artist, of course, was Jacob Lawrence. I immediately fell in love with his bold and expressive work and felt personally touched by his ability to so creatively tell the story of the black American experience.”

Adams committed himself to follow in Lawrence’s footsteps by applying to and enrolling at Pratt Institute. During Adams’ first year, he was awestruck by a moment of serendipity when Lawrence returned to campus to be honored by the Black Alumni Association and they spent the whole day together. 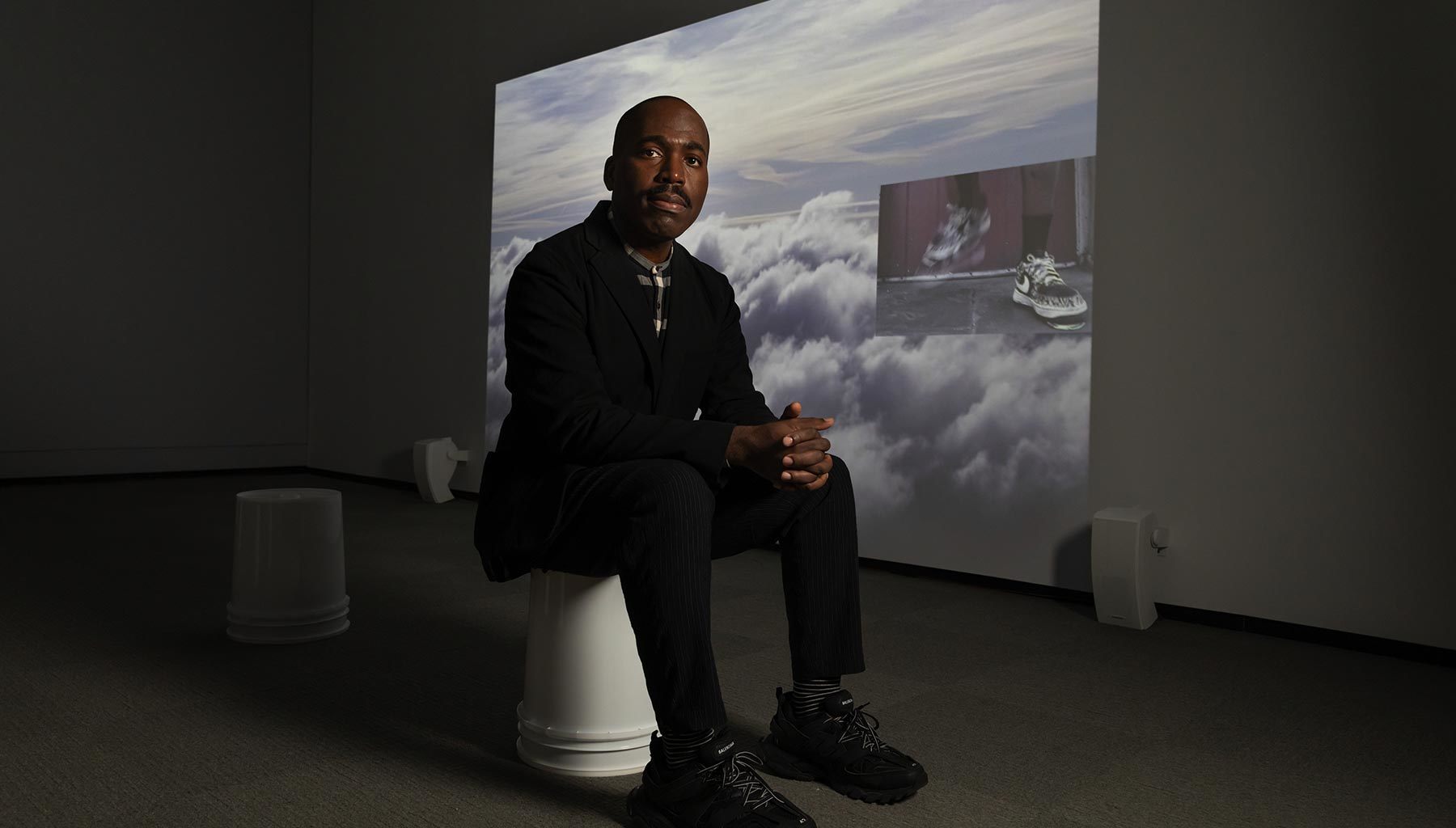 To this day, the surrealness of being in his presence, just one year after picking up that library book, fills me with immense gratitude and purpose. 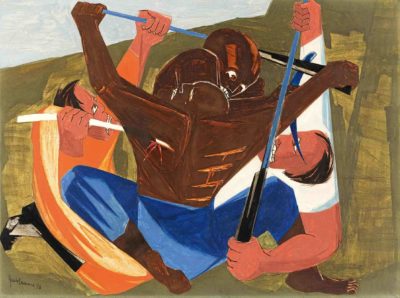 Jacob Lawrence, . . . for freedom we want and will have, for we have served this cruel land long enuff . . . —a Georgia slave, 1810, Panel 27, 1956, from Struggle: From the History of the American People, 1954–56, egg tempera on hardboard. Private collection. © The Jacob and Gwendolyn Knight Lawrence Foundation, Seattle/Artists Rights Society (ARS), New York. 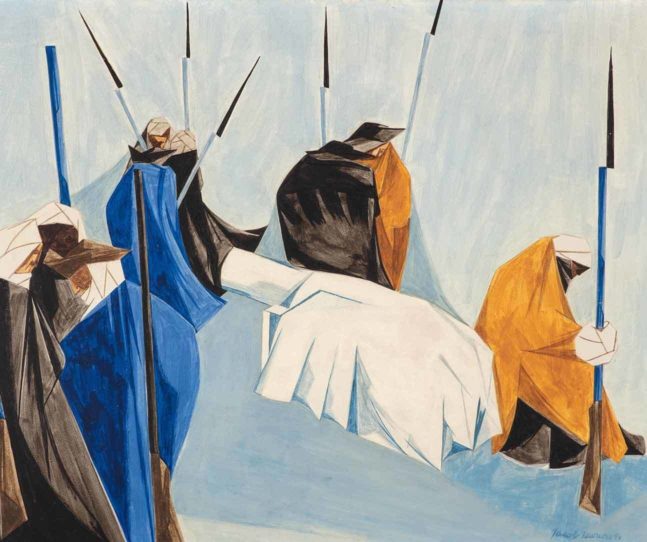 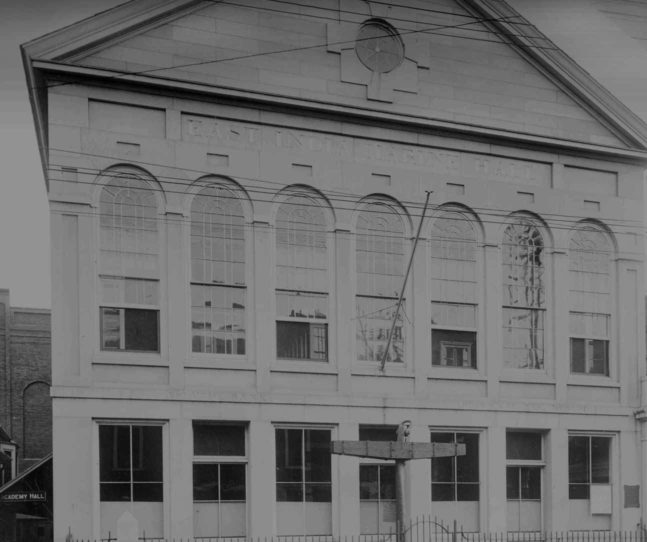 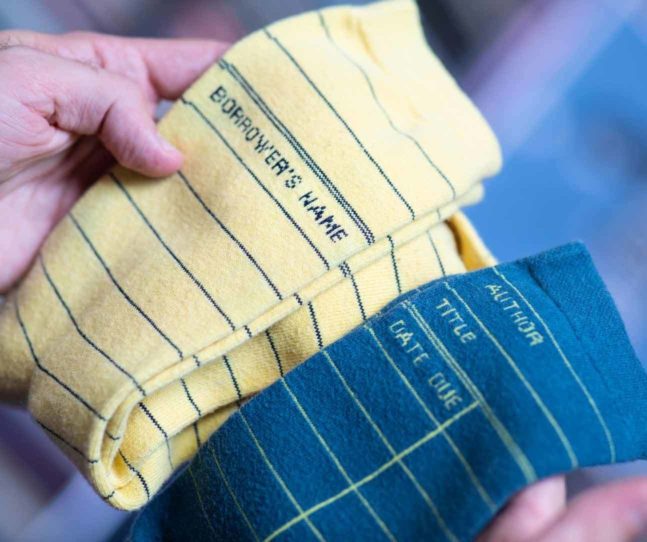 Jacob Lawrence: Behind the Curtain
Celebrating a visionary Salem winemaker