It is May — bringing in its warmer weather, pastel colored flowers, and most importantly, the month cherished by all history lovers as National Preservation Month (the crowd goes wild)! And what better way to discuss our fascination and love for history and historical artifacts than by writing a blog post about historic housekeeping! Am I right?! Maybe? Ok, bear with me and I’ll see if I can convince you.

Ensuring that I have all of the correct tools are the first steps I take to prepare for cleaning one of PEM’s five historic houses, normally open to the public (Crowninshield-Bentley House, Garner-Pingree House, John Ward House, Ropes Mansion and Yin Yu Tang).

To some, cleaning historic houses sounds like a tedious and uninteresting job, but to me, it is the absolute best part of my week. I love the feeling of entering an old home and having it welcome me with its worn floorboards, streaming sunlight and aura of peace. For a few hours, I am able to transport myself to another world of complete and total quiet (except for the soft hum of the vacuum) and know that I am doing my part to bring history alive for the current generation. 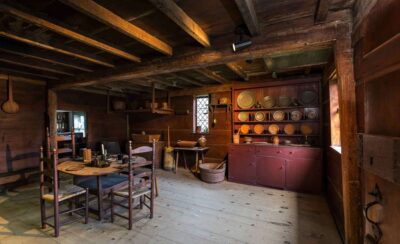 Taking care of a historic house and its collection is not exactly like cleaning in one’s own home. I would know this. I hate to clean my own house with every fiber of my being. Ask anyone who knows me and they will confirm. Cleaning a historic house and its collection of valued possessions, however, is completely different — primarily because there is a sense of greater purpose. The pieces in these spaces belonged to people who helped shape society as we know it today. Many objects represent some of the finest craftsmanship produced nationally and internationally for their age and they deserve admiration and respect in their own right. More than that though, these objects were cherished by their owners for myriad reasons. 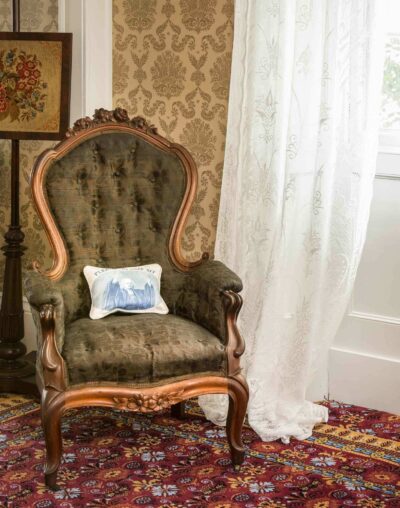 Interior of the Ropes Mansion.

I feel that having these artifacts interpreted in spaces in their original context helps modern audiences understand better how each and every object was used and why it was created originally, either as a luxury or a utilitarian good.

My favorite house to clean is the Crowninshield-Bentley House. In particular, I love the old kitchen in the rear of the home. Being a “very good eater” from childhood and a want-to-be decent bread baker, I have always been drawn to kitchens with their savory aromas and specialty appliances and tools. For instance, in Crowninshield-Bentley, there is a long-handled, surprisingly heavy waffle iron that dates back to circa 1720 — I didn't even know that waffles had been around that long (apparently the first waffle was invented in medieval times and has a long and interesting evolution from wafers that trace their ancestry back to the ancient Greeks). Ours has a cross design with the letters IHS emblazoned in the center that stamped every waffle with the ancestral crest.

I just picture these concoctions being served on the pewter plates that grace the pine table in the center of the room. Near the waffle iron hangs an iron and wood coffee mill with a wooden handle and an iron cone and gears that would not look out of place in a farm-to-table restaurant. I can only imagine it would grind coffee to absolute perfection, if given the chance. Apparently, the past owners loved their breakfasts — and who can blame them? While dusting away, I love that these objects give important insights not only into the families that lived there and their tastes and comforts, but also hint at human ingenuity and evolving tastes as trade and agriculture developed in the new world and across the globe. 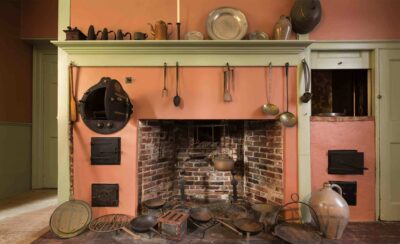 There is also the added bonus that historic properties cannot, and should not, be cleaned to the same white-glove standard that we practice in our own homes. Every interaction with an object heightens the risk of its destruction either due to inherent vice (whereby an object will fall apart or disintegrate because of the materials used or how it was made originally), accidental bumpage, or, the greatest of any collection worker’s fears, droppage. Additionally, even standard cleaning motions and products can wear away an object’s surface after hundreds of years and repeated cleanings. For this reason, routine housekeeping today is performed only when necessary and is as noninvasive as possible.

Interior of the Crowninshield-Bentley House. 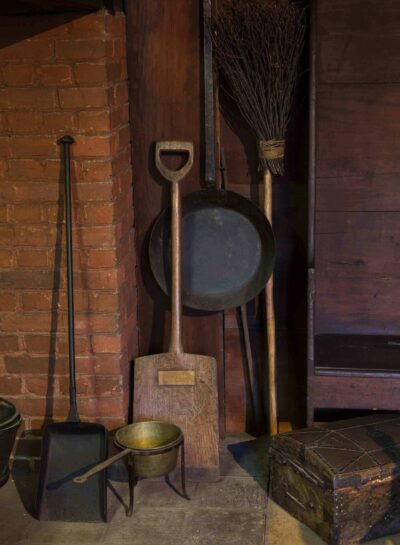 The most common cleaning practice involves lifting the dust off of objects with a soft-bristled brush in one hand and sucking up the resulting clouds into a vacuum hose held in the other. It is a pretty magical process. At my first job at George Washington’s Mount Vernon, where we received over one million visitors a year, I called this process “the Harry Potter effect” because of the giant wafts of dust that would arise off of every object every day. Foot traffic brings in a lot of dust! Here at PEM, our houses do not see that level of visitation yet, but we still have our fair share of debris brought in on a regular basis.

Over the past several weeks, we are taking advantage of the quarantine to rewrite our housekeeping procedures and make sure that every house continues to receive professional standards of care on a routine basis. While it is disheartening to be kept out of the spaces for weeks on end, we never would have been able to delve as deeply into writing policies and procedures that will benefit current and future staff.

Interior of the Crowninshield-Bentley House.

To be honest though, I am eagerly awaiting the day when we can get back to the houses and put our procedures into practice. I have missed the peace and connection to history that my interludes with the vacuum can bring to my ordinary routine. In the meantime, I will try and pretend that my dust bunnies at home are just as fascinating as historic ones. Happy Spring Cleaning, everyone!

All photos by Kathy Tarantola/PEM. 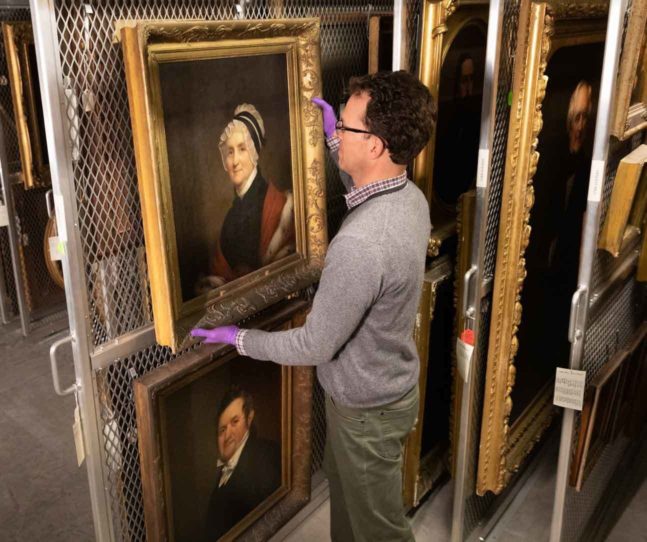 Behind the scenes with Collection Management 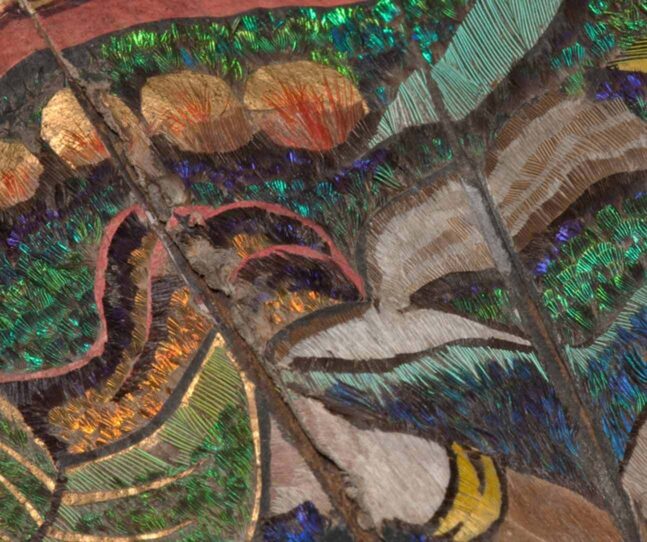 Salem and the lady cyclist
The constant gardener