PEM’s Asian Export Art collection, foremost in the world, explores cross-cultural exchange through porcelain, textiles, tea, ivory and silver. This intensive trade activity between Asia and the rest of the world can be seen in the new gallery, which opened this fall, featuring more than 200 works of art made in diverse media by artists in China, Japan and South Asia. 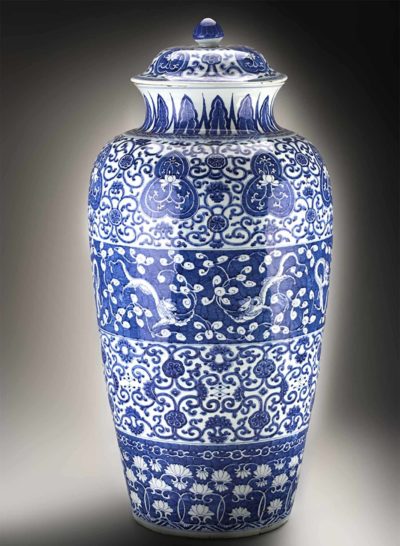 These transcultural objects demonstrate the beauty and ingenuity that can be created through blending artistic traditions, materials and technologies. But the new installation also addresses a darker side of the story, the uncomfortable truth that many of these works of art were originally purchased with profits derived from the illegal opium trade. During the 1800s, millions of Indian and Chinese lives were devastated by opium, a foreshadowing of today’s opioid crisis. 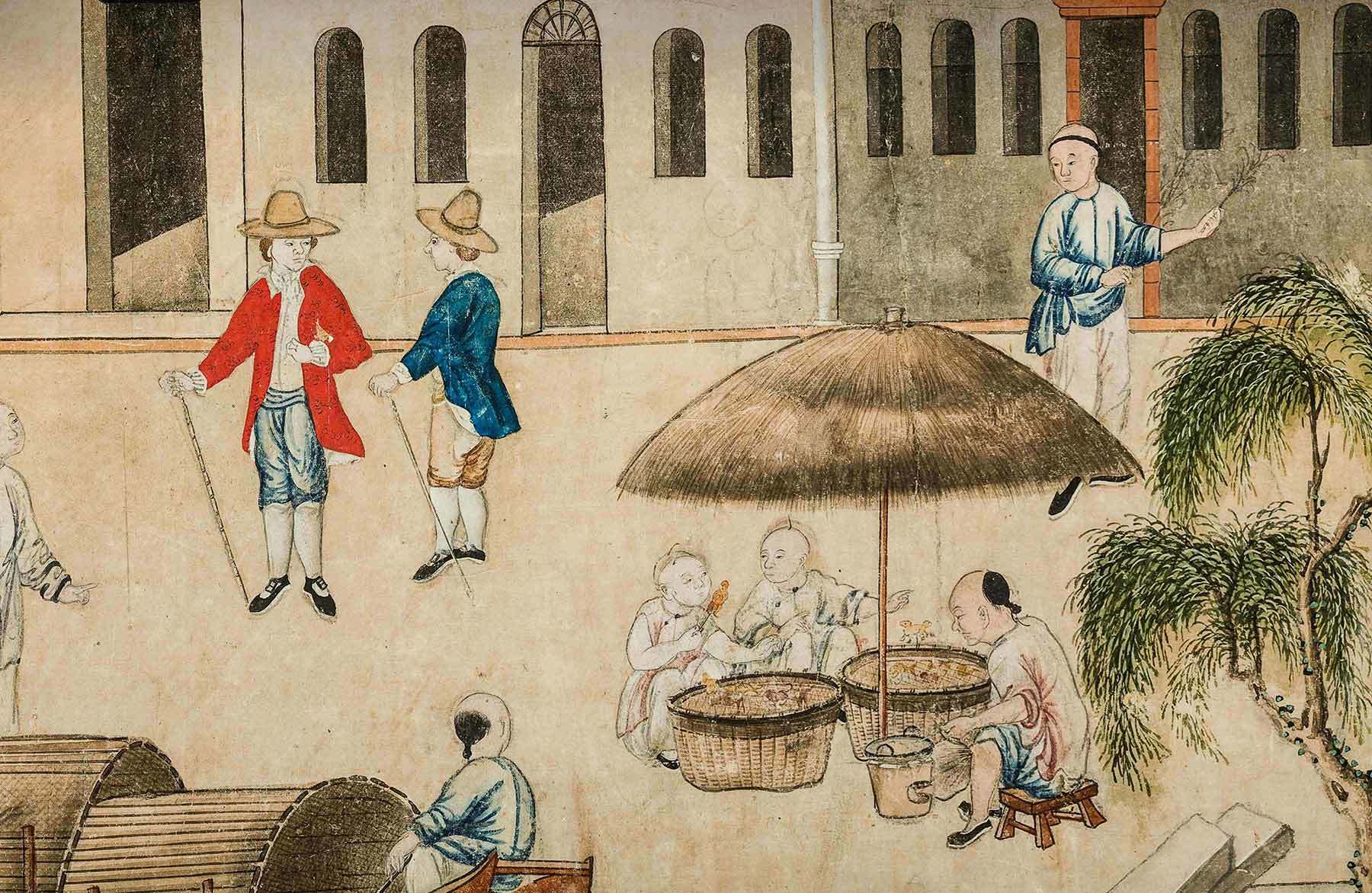 When the exhibition team assigned to work on the reinstallation of our Asian Export Art collection first came together to discuss our ideas for the gallery, it was clear that the toll of opium was top of mind. Opium had always lurked in the background of the story we told about global trade, but we had never fully addressed the truly central role it played. We felt that the resonance with our present-day opioid crisis made that silence untenable. 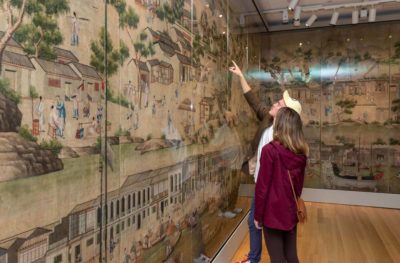 According to the Centers for Disease Control, 47,000 people died from opioid-related overdoses in the United States in 2017. To put that number in perspective, it’s another life lost—someone’s mother or brother or partner or best friend—every eleven minutes. 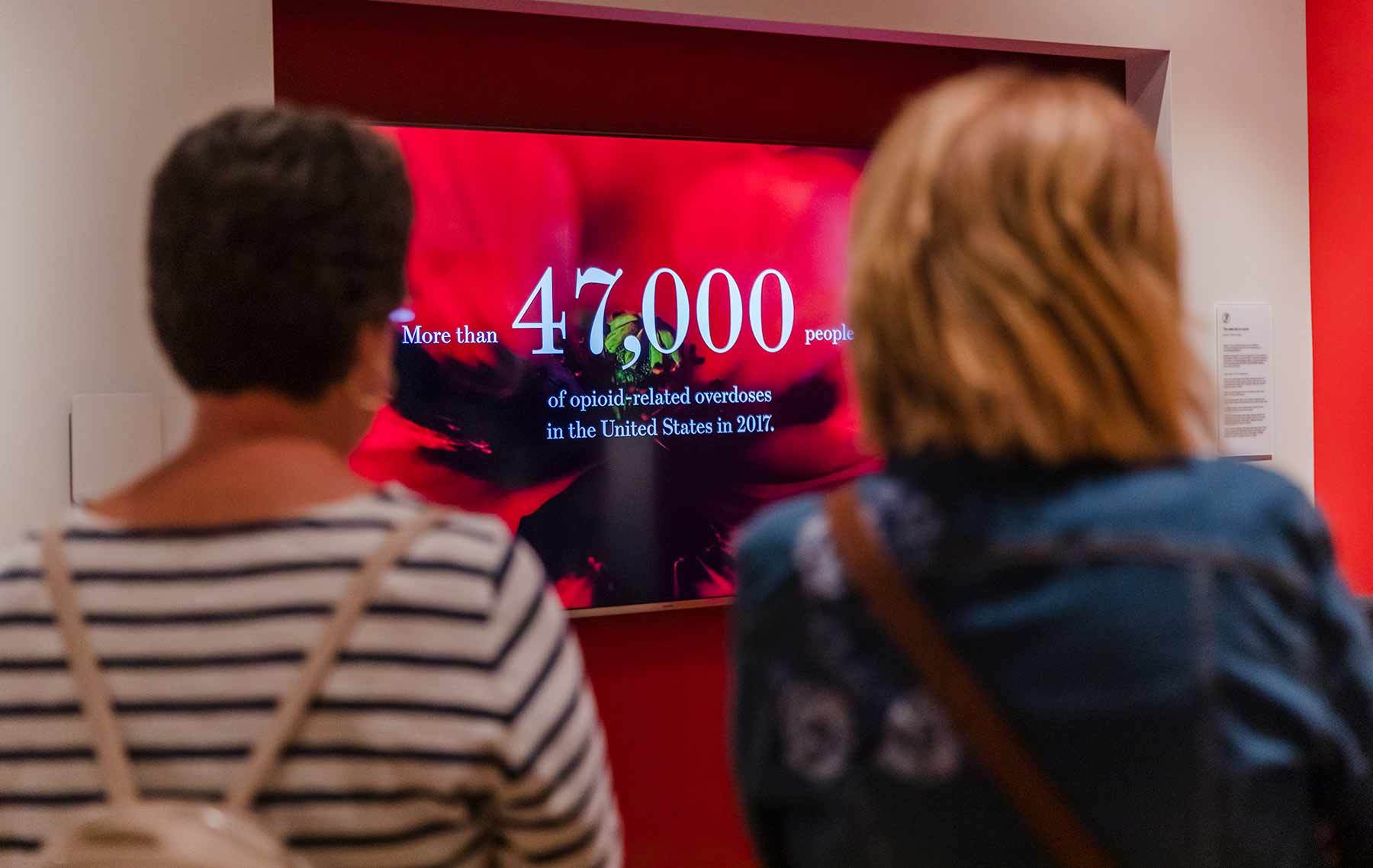 As heart-wrenching as this crisis is, it pales in comparison to the millions of lives in China and South Asia that were devastated by illegal opium in the 18th and 19th centuries.

Opium, as it was traded at the time, was made from the sap of a certain type of poppy. Once it was distilled, dried and formed into balls, it was compact, stable and easily transported. It was smoked through a pipe and, unlike today’s opioid drugs (morphine, heroin, hydrocodone, and fentanyl), rarely fatal. Instead, it rendered its users emotionally and physiologically empty, disrupting fertility, family stability, productivity and almost every aspect of life for generations. It was also the key to British and American success in China: merchants desperate to get their hands on Chinese tea, porcelain, silk and other luxuries finally had a commodity the Chinese wanted as much as silver and this shifted the balance of trade. 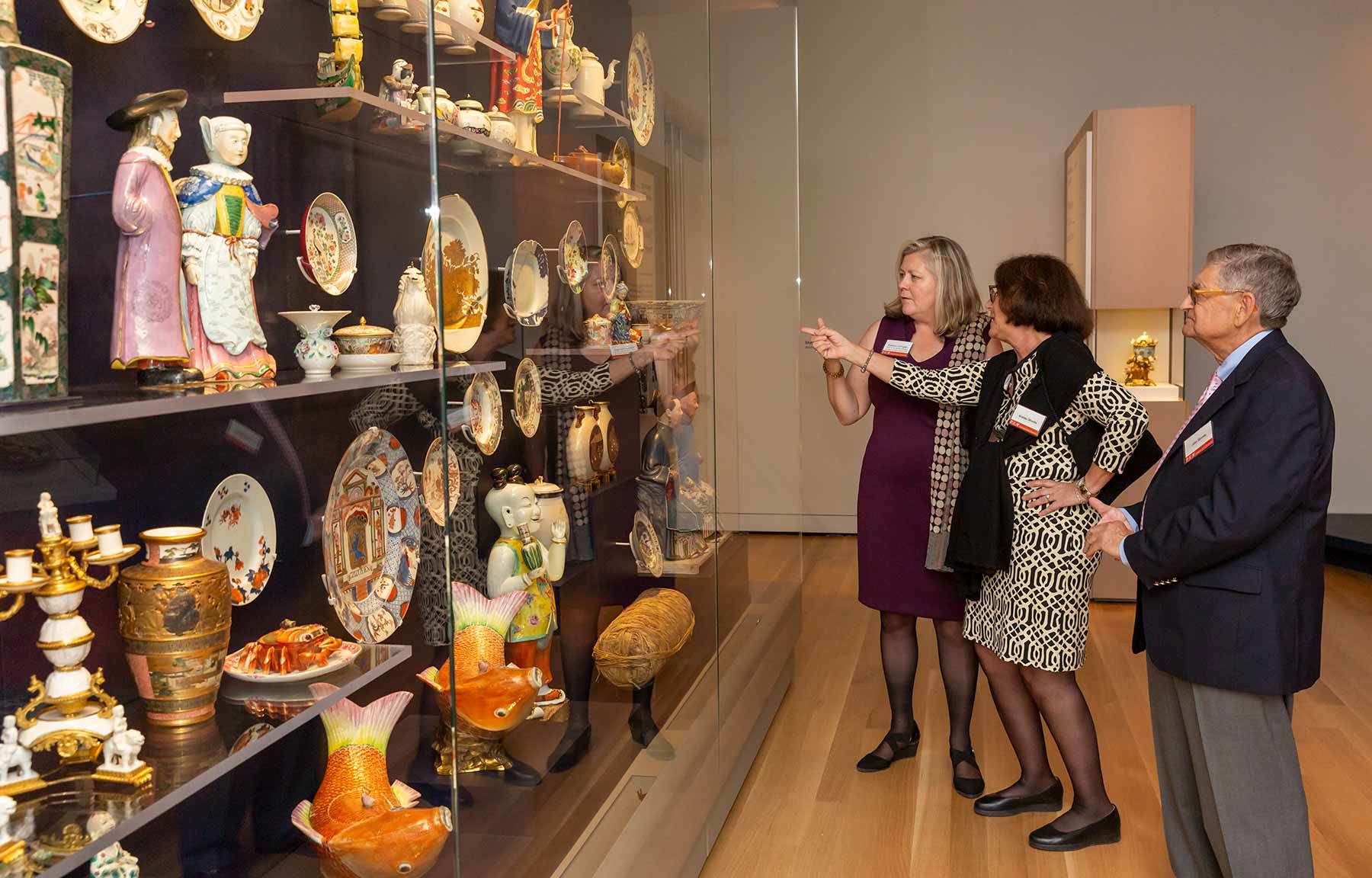 Too many families in Massachusetts—right here in Salem, in fact—are touched by opioid addiction every day. We are committed to connecting history to the contemporary crisis and want to acknowledge these families, let them know they are not alone, and to make the gallery a welcoming place for them.

In May 2018 we reached out to WBUR reporter Martha Bebinger, who was working on a series on opioid addiction. Through conversations with Martha, we began to see how Boston’s historical connections to the opium trade fed into issues the city—and indeed, the entire state of Massachusetts—faces today.

Martha also connected us to Joanne Peterson, the founder and executive director of Learn2Cope, an organization in Massachusetts dedicated to helping the families and friends of those living with addiction. We met with Joanne in July 2018 and were overwhelmed by the power of the work she and her team are doing. She listened openly to our ideas, asked insightful questions, and responded honestly to our questions. Joanne helped us to see several potentially problematic and triggering aspects of the experience we wanted to build. She also opened our eyes to how many in our own community here in Salem and on the North Shore are coping with addiction every day. 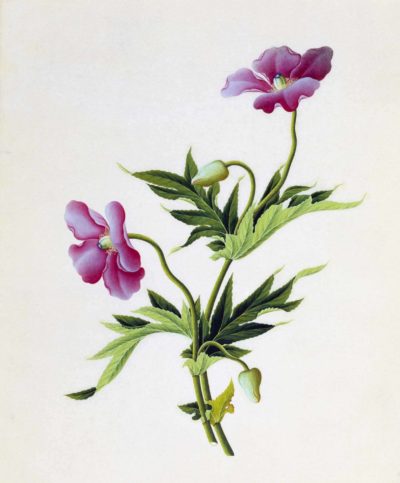 How best to tell this story? Ultimately, we realized that we couldn’t rely solely on objects—not only because we wanted to avoid imagery that supported racist stereotypes and objects that might be triggering for those currently dealing with addiction—but also because the history required more room to breathe and unfurl than an object label or panel would allow. So, instead we focused on storyboarding a five-minute silent video using the contemporary crisis as a jumping-off point to discuss the historical trade. Once our storyboard was approved, we met with the team at Bluecadet, the award-winning digital firm in Philadelphia, who brought our ideas to life.

We hope that you’ll stop to watch this video when you visit the Asian Export gallery. And we hope it makes you look differently at the art that surrounds you. History is always more complex and multifaceted than we can imagine. We hope that you still appreciate the beauty and artistry that surrounds you while acknowledging the unequal power structures that brought many of these objects to the museum. We also hope it helps you to see those struggling with addiction today in a different light.

We may not have the power to change history, but we can use it to better shape our future. 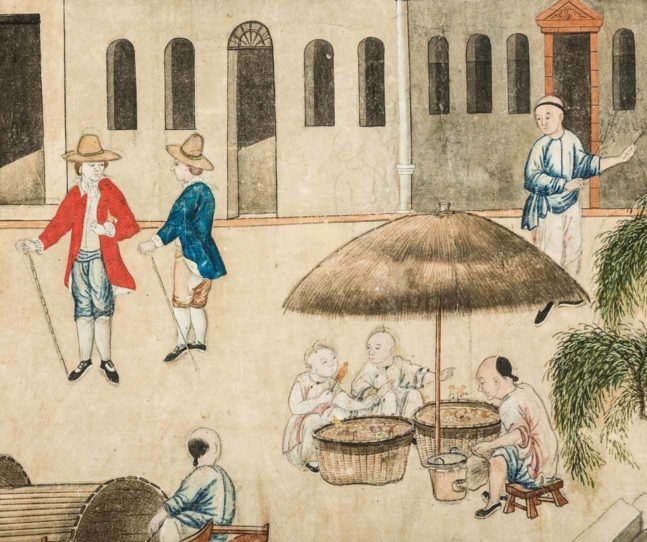 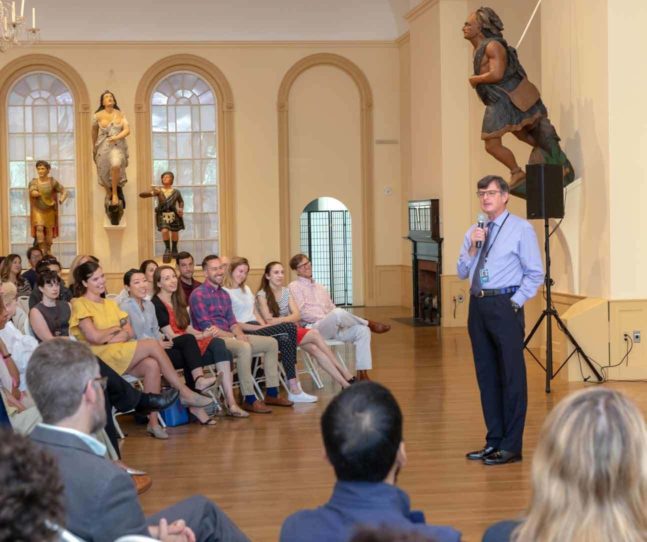 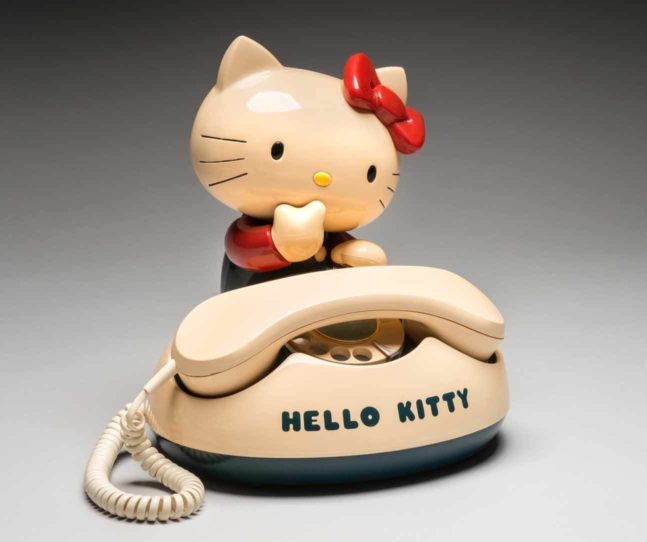