Tune into the PEM Walks audio postcard below to listen to a tour of the Gardner-Pingree House:

The grand Gardner-Pingree House is across and down from the museum at 128 Essex Street. It was built in 1804 for John Gardner, a wealthy Salem merchant and nephew of Elias Hasket “King” Derby, mentioned in the preface to Nathaniel Hawthorne’s The Scarlet Letter.

With success at sea as well as a profitable wholesale business on the waterfront, Gardner became highly motivated to build a home to showcase his new wealth. He hired well-known architect and woodworker Samuel McIntire to design and build this massive, elegantly proportioned Federal-style townhouse in the heart of downtown Salem in an up-and coming neighborhood adjacent to Salem Common.

In the early 19th century, houses like this were among the most opulent homes in the country. A mansion like this was particularly active during the winter ball season. Typically an evening gathering in the double parlors would involve music, dining and dancing until sunrise.

But the house has a dark side too. Leading Salem merchant Joseph White, a later owner of the house, was murdered in his bed chamber, by the Crowninshield brothers, over his inheritance. In this real “trial of the century,” attorney and congressman Daniel Webster was brought in to prosecute. Webster’s summation of the murder is widely agreed to have been the inspiration of Edgar Allen Poe’s A Tell-Tale Heart. 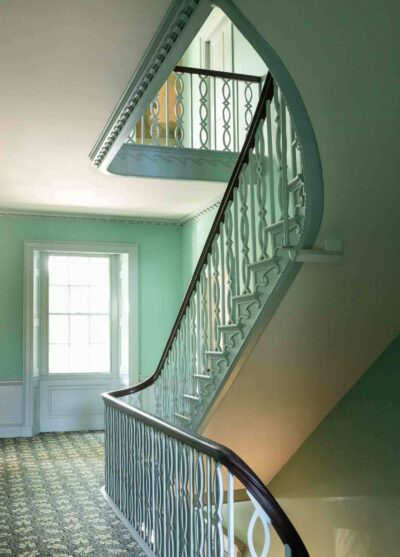