In this PEM Walks, we explore a house that has been called the most expensive house ever built in America. The Andrew-Safford Mansion is at 13 Washington Square West at Brown Street.

The Andrew Safford House is in the Washington Square Historic District, and the most publicly prominent of PEM’s historic structures. When this house was built 1818, it was the most expensive and well-appointed mansion in America. The extravagant mansion was built by John Andrew, a Salem merchant specializing in the fur trade with Russia. But within 10 years of its construction, John Andrew was bankrupt and lost ownership of it.

The first thing people might notice is the piazza on the west side of the house. It features four colossal scale doric columns, carved from solid logs. One of the reasons we know quite a lot about the construction of this house is the construction was actually documented by diarist Reverend Bentley, who was living just a few hundred yards away and watched the great columns being hoisted into place. The interior woodwork is attributed to Joseph True, a master carpenter who had apprenticed to the then recently-late Samuel McIntire.

The interior of this house is in extraordinary condition in terms of its layout, woodwork and detail. A three story staircase leads to all floors of the house. Delightful federal details include interior glazed fan lights over double door entryways. Another extraordinary thing about the expense to which John Andrew went to build this house are the solid mahogany doors throughout which retain their original mercury glass knobs.

The opulent home is a reflection of very sudden and extreme gentrification of the neighborhood in the golden years of Salem’s economic boom. But the 1820s in Salem were extremely turbulent from an economic standpoint and many merchants who built houses similar to this one found themselves destitute. The house passed into the Safford family in the 1860s and came to PEM through it’s parent institution, the Essex Institute, who acquired it in 1947 as the residence for the Executive Director. Today the mansion is used for rentals, internal meetings and private functions.

The adjoining three-bay elegant brick carriage house once sheltered horses and early automobiles. It is now home to Goodnight Fatty, a business that serves up cookes, milk and ice cream on weekend evenings. 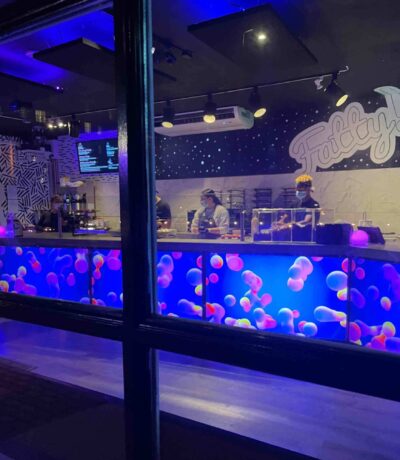