Significant collection of Japanese Cloisonné enamels  to be donated to PEM

SALEM, MA — The Peabody Essex Museum (PEM) is pleased to announce that it will receive a generous and inspiring gift of Japanese cloisonné enamels from renowned scholar and collector, Fredric T. Schneider. The collection, which Schneider began assembling in 1993, features approximately 900 works tracing four centuries of cloisonné enamel production. Works include commissions for the Japanese imperial family, pieces for export — among them masterworks exhibited at many International fairs — as well as a group of important cloisonné enamel pieces by contemporary master practitioners. The Schneider Collection significantly expands PEM’s renowned holdings of Japanese art. The announcement of the gift coincides with a public lecture on Japanese art by Midori Oka, which will be held at PEM on June 12, 2022.

“PEM is honored to become a publicly-accessible site for the appreciation, research, and study of Japanese cloisonné enamels,” said Lynda Roscoe Hartigan, PEM’s Rose-Marie and Eijk van Otterloo Executive Director and CEO. “This exceptional collection expands the types of stories, objects and experiences that PEM can share about Japanese art and culture and we are so grateful for Fredric Schneider’s generosity and long range vision.”

In 2010, Schneider authored the most comprehensive book to date on the subject – The Art of Japanese Cloisonné Enamel: History, Techniques and Artists, 1600 to the Present. First practiced in Japan in the 17th century, the labor-intensive technique of decorating metal forms with colored enamels reached a pinnacle of technical and artistic excellence during the late 19th and the early 20th centuries. Works in the Schneider Collection demonstrate the full range of techniques employed in cloisonné enamel on diverse forms including vases, boxes, bowls, plates, plaques and incense burners, as well as architectural elements, scholars’ objects, medals and other items of personal adornment, sword fittings, and even a sumo-wrestling judge’s signal fan. Contemporary artists in Japan continue to use cloisonné enamels in innovative and exciting ways and the collection represents many of today’s leading practitioners. Together, works in this collection reflect enamel’s broad role in Japanese material culture and demonstrate the remarkable evolution of technique over the last four centuries. 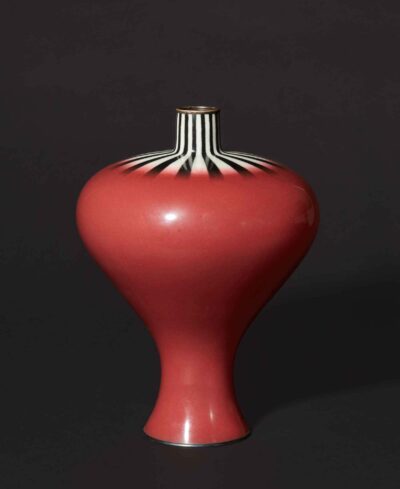 “The gift to PEM of Fredric Schneider’s comprehensive collection establishes the museum as an international center for the study and appreciation of Japanese cloisonné enamel. His carefully-curated gift also includes collections of ephemera, photographs, rare books, interviews with Japanese specialists and other research materials, all of which will serve as tremendous resources for future scholars at PEM’s Phillips Library,” noted Karina H. Corrigan, PEM’s Associate Director ​– Collections and H. A. Crosby Forbes Curator of Asian Export Art.

Selections from the collection will be on display in PEM’s galleries and forthcoming exhibitions and the entire collection will be accessible to researchers online and at PEM’s Collections Center in Rowley, Massachusetts. Generous funding from Schneider will support the acquisition of Japanese cloisonné enamels as well as provide for the Schneider Collection’s long-term study and care.

An extensive, illustrated interview-essay with Fredric T. Schneider will appear in Impressions 43, Part Two (2022), the Journal of the Japanese Art Society of America (www.japaneseartsoc.org).

Midori Oka, Associate Director of the Mary Griggs Burke Center for Japanese Art, Columbia University, and former Associate Curator of Japanese Art at PEM, will present a fascinating lecture on one of PEM's Japanese treasures – a 20-foot-long handscroll, decorated with fish and sea creatures. This scroll was the original sketch for the embroidered designs on a 19th-century parade float cover still used during the annual Kunchi festival in Nagasaki – a celebration of the city's history and its special connection to international trade. This lecture is dedicated to the memory of Robert Jay Hamburger (1941–2021) and his deep, lifelong dedication to Japanese art and culture.

PEM’s remarkably long relationship with Japan extends back more than 200 years. With its holdings of everyday objects complemented by significant examples of the fine arts, the museum’s Japanese collection is distinguished for its range, from paintings and sculpture to decorative arts, costumes, and textiles. Spanning Hokkaido in the north to Okinawa in the south, and prehistoric periods to the present, these objects illuminate the country's varied artistic and cultural traditions.

Until the end of the Edo period (1615–1868), the Dutch were the only European merchants permitted to trade with Japan. Between 1797 and 1807, however, the Dutch East India Company chartered twelve American ships to sail to the island nation. Among them, the Franklin and the Margaret set sail from Salem, reaching Nagasaki Harbor in 1799 and 1801, respectively. Teacups and saucers and works of art in lacquer brought back by the Margaret’s captain, Samuel Gardner Derby, represent the aesthetics of everyday Japanese objects. Donated to the East India Marine Society in 1803, they are considered among the first Japanese works to enter the collection of an American institution. Much of PEM’s Japanese art and culture collection was assembled under the leadership of Edward Sylvester Morse, who collected objects of daily life in 19th- and early 20th-century Japan. The collection has gained additional strength in recent years through the acquisition of important works made specifically for export to international markets as well as contemporary ceramics and fashion.

ABOUT THE PEABODY ESSEX MUSEUM
Over the last 20 years, the Peabody Essex Museum (PEM) has distinguished itself as one of the fastest-growing art museums in North America. Founded in 1799, it is also the country’s oldest continuously operating museum. At its heart is a mission to enrich and transform people's lives by broadening their perspectives, attitudes and knowledge of themselves and the wider world. PEM celebrates outstanding artistic and cultural creativity through exhibitions, programming and special events that emphasize cross-cultural connections, integrate past and present and underscore the vital importance of creative expression. The museum's collection is among the finest of its kind boasting superlative works from around the globe and across time — including American art and architecture, Asian export art, photography, maritime art and history, Native American, Oceanic, and African art, as well as one of the nation’s most important museum-based collections of rare books and manuscripts. PEM's campus offers a varied and unique visitor experience with hands-on creativity zones, interactive opportunities and performance spaces. Twenty-two noted historic structures grace PEM’s campus, including Yin Yu Tang, a 200-year-old Chinese house that is the only example of Chinese domestic architecture on display in the United States. HOURS: Open Mondays, Thursdays, Saturdays & Sundays, 10 am–5 pm, and Fridays 10 am–7 pm. Closed Thanksgiving, Christmas and New Year's Day. ADMISSION: Adults $20; seniors $18; students $12. Members, youth 16 and under and residents of Salem enjoy free general admission. INFO: Call 866-745-1876 or visit pem.org.