Photographic Journeys Past and Present Show China in a New Light

A Lasting Memento: John Thomson’s Photographs Along the River Min

Save the Date: Press Reception on Wednesday, June 19 @ 6-8pm

SALEM, MA — The Peabody Essex Museum (PEM) presents a voyage into 19th-century China through one of PEM’s photographic treasures, John Thomson’s rare album Foochow and the River Min. More than forty striking landscapes, city views, and portrait studies will be on view, captured by Thomson as he traveled in the Fujian province in Southeast China from 1870 to 1871. These prints are complemented by a selection of photographs by contemporary artist Luo Dan, who was inspired by Thomson to undertake his own journey in southwestern China in 2010. A Lasting Memento: John Thomson’s Photographs Along the River Min is on view at PEM from June 1, 2019 through May 17, 2020.

From 1870 to 1871, Scottish-born photographer John Thomson traveled 160 miles up the River Min to document the area in and around the city of Fuzhou (Foochow), one of the most picturesque regions in China. Thomson gathered eighty photographs from this voyage into an album titled Foochow and the River Min which was sold by advance subscription to the foreign residents of Fuzhou — tea planters, merchants, missionaries and government officials — who wanted a way to share their experiences with friends and family back home. Of the 46 copies originally published, fewer than 10 survive today and PEM is privileged to own two of them, both of which are featured in the exhibition.

“Many people have a conception of China as very industrialized and modern, even sterile, but these photographs complicate that notion and reveal the country’s incredible beauty and geographic diversity,” says Sarah Kennel, PEM’s Byrne Family Curator of Photography. “The roots of China’s rapid modernization go back to the 19th-century and are part of a larger history of maritime culture, trade, and globalization that are also entwined with PEM’s origin story. This exhibition affirms how photography can bring us back to another place in time and can change the way we see the world.”

Thomson was a renowned photographer, focusing on fine art, landscape, and architectural photos, and was often credited with being one of the first photographers to use pictures in conjunction with journalistic commentary. Foochow and the River Min is accompanied by introductory text, presenting a pictorial journey featuring the character of the growing city of Fuzhou, the beauty of the landscapes surrounding the River Min, as well as Thomson’s studies of the people he encountered there.

DOCUMENTING EASTERN CULTURE
Thomson is considered one of the first photographers to document East and South Asia. Born in Scotland, he learned photography while still in school, working as an apprentice to a maker of optical and scientific instruments. In 1862, he joined his older brother William, also a photographer and watchmaker, in Singapore, where they established a studio. Thomson spent the next several years photographing throughout Asia, including Cambodia, India, and Thailand. By 1866, he had joined the Royal Ethnological Society of London, was elected a Fellow member of the Royal Geographic Society, and styled himself as an expert on Eastern cultures. In 1868, he established a studio in Hong Kong, a burgeoning center of photography and trade. For the next four years, Thomson traveled and photographed throughout China before returning in 1872 to Britain, where he remained until his death in 1921.

The exhibition follows Thomson’s journey up the River Min, from the city of Fuzhou to Nanping. “Thomson’s extraordinary gifts as a photographer are evident in his compositions, including his famous view of the floating island pagoda,” says Kennel. “You can look at these as merely beautiful pictures, but if you unlock them a little bit they tell the story of an important moment of economic trade, cultural exchange, and political tension.”

Among the works on view are an extraordinary series on the Yuen Fu monastery, tucked high up a steep, rocky ravine. A strain of wistful romanticism is present, particularly in landscape photographs that incorporate a solitary figure.

In order to make his negatives, Thomson used the wet-collodion process. This required him to set up a large camera on a tripod and prepare the photographic plate on the spot by dipping it into light-sensitive chemicals in a makeshift darkroom, putting it in a plate holder and making the exposure within five minutes. He experimented with these processes while traveling by boat or ascending very steep hills and traversing rough terrain with a coterie of Chinese employees who not only hauled his equipment but also sometimes carried Thomson himself. Missionary and business colleagues helped facilitate introductions and provide access to unique locations so that Thomson could make his landscapes and portraits. The albums were printed using the carbon process, which imbues them with a rich, purplish tonality. 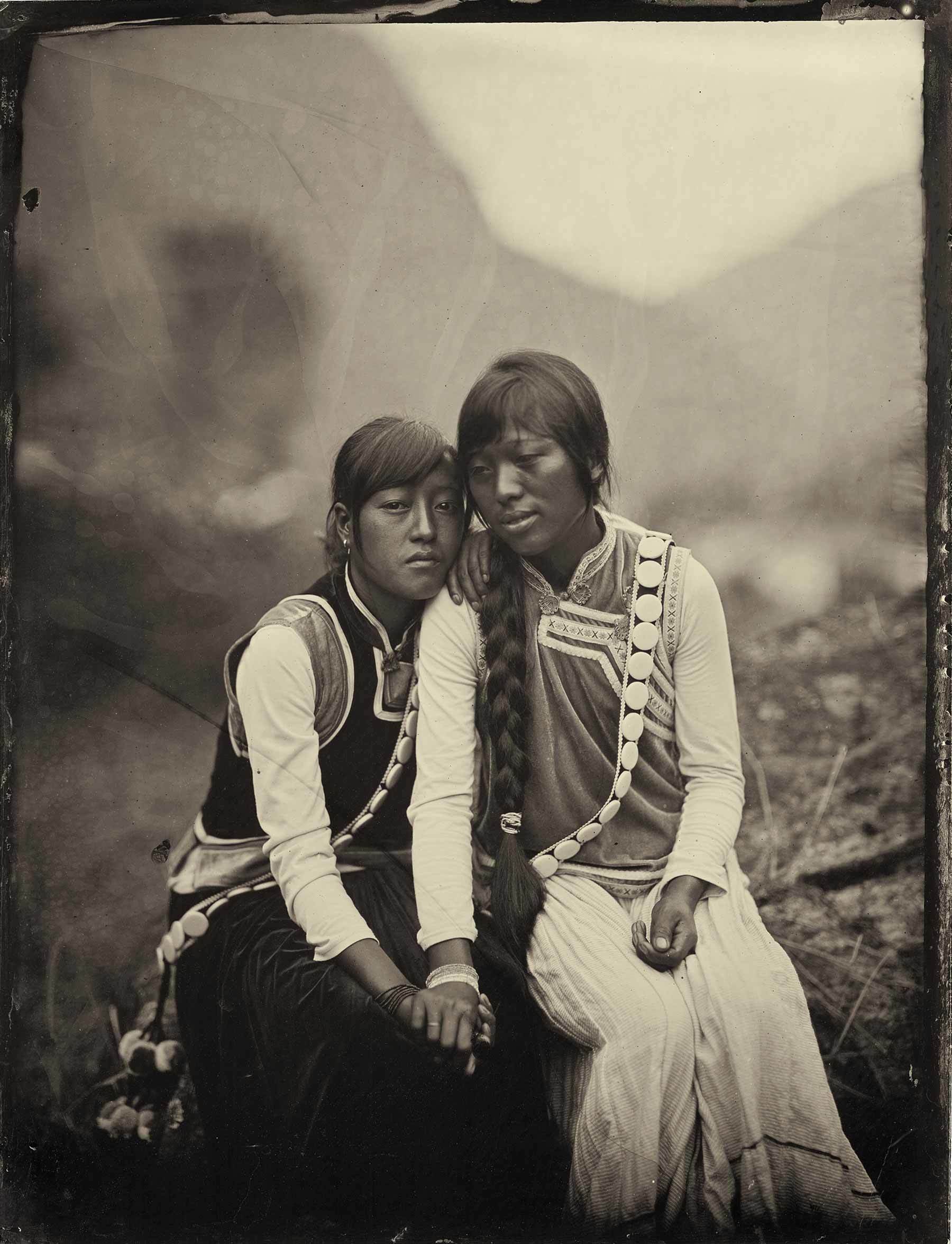 INSPIRED BY THOMSON
Contemporary Chinese photographer Luo Dan’s work focuses on the impact of modernization and globalization in China. Inspired by Thomson’s example, Luo traveled to the remote Nu River Valley in southwestern China, where he lived with and photographed the Lisu and Nu Christian ethnic minority communities for nearly two years, using the same hand-made wet-collodion process that Thomson had employed some 150 years earlier. Luo was especially interested in what he perceived as the villagers’ connection to local cultural traditions. A Lasting Memento features 10 works by Luo that reflect on and reverberate with the spirit and enterprise of Thomson’s 19th-century project.

Please join us for a cocktail reception and curatorial tour of two new exhibitions at PEM, A Lasting Memento: John Thomson’s Photographs Along the River Min and Kimsooja: Archive of Mind. RSVP to Paige Besse at paige_besse@pem.org.

EXHIBITION CREDIT
A Lasting Memento: John Thomson’s Photographs Along the River Min is organized by the Peabody Essex Museum. Carolyn and Peter S. Lynch and The Lynch Foundation, Quan Zhou and Dr. Xiaohua Zhang, Jennifer and Andrew Borggaard and Kate and Ford O'Neil provided generous support. We also recognize the generosity of the East India Marine Associates of the Peabody Essex Museum.

ABOUT THE PEABODY ESSEX MUSEUM
Over the last 20 years, the Peabody Essex Museum (PEM) has distinguished itself as one of the fastest-growing art museums in North America. Founded in 1799, it is also the country’s oldest continuously operating museum. At its heart is a mission to enrich and transform people's lives by broadening their perspectives, attitudes and knowledge of themselves and the wider world. PEM celebrates outstanding artistic and cultural creativity through exhibitions, programming and special events that emphasize cross-cultural connections, integrate past and present and underscore the vital importance of creative expression. The museum's collection is among the finest of its kind boasting superlative works from around the globe and across time -- including American art and architecture, Asian export art, photography, maritime art and history, Native American, Oceanic, and African art, as well as one of the nation’s most important museum-based collections of rare books and manuscripts. PEM's campus affords a varied and unique visitor experience with hands-on creativity zones, interactive opportunities and performance spaces. Twenty-two noted historic structures grace PEM’s campus, including Yin Yu Tang, a 200-year-old Chinese house that is the only such example of Chinese domestic architecture on display in the United States. HOURS: Open Tuesday-Sunday, 10 am-5 pm. Closed Mondays, Thanksgiving, Christmas and New Year's Day. ADMISSION: Adults $20; seniors $18; students $12. Additional admission to Yin Yu Tang: $6 (plus museum admission). Members, youth 16 and under and residents of Salem enjoy free general admission and free admission to Yin Yu Tang. INFO: Call 866-745-1876 or visit pem.org.