PEM Decodes a Masterpiece in ‘Samuel F. B. Morse’s Gallery of the Louvre and the Art of Invention'

SALEM, MA — In a single painting, Samuel F. B. Morse — artist and inventor of the telegraph — captured France’s greatest masterpieces and brought them to an American audience. The Peabody Essex Museum (PEM) presents Morse’s grand canvas, Gallery of the Louvre, painted from 1831 to 1833, alongside more than 65 rare photographs from the museum’s collection of photographs, in an exhibition that explores the role of images in transmitting ideas and transforming communication. ‘Samuel F.B. Morse's Gallery of the Louvre and the Art of Invention’ is organized by the Terra Foundation for American Art and is on view at PEM October 8, 2016 through January 8, 2017.

While Morse is best known as the inventor of the telegraph and his namesake code, he first achieved success as one of the best portrait painters of his generation. He was also an art professor who wanted to bring knowledge of European art to America at a time when there were very few public museums in the United States. His monumental canvas, Gallery of the Louvre, was his attempt to do just that.

Measuring approximately six by nine feet, the painting depicts an installation of artworks at Paris’ Musée du Louvre, compressing 38 paintings, two sculptures and numerous figures into a single composition. Morse labored for 14 months at the Louvre, making individual copies of paintings by Da Vinci, Titian and Rubens and exploring various approaches to the treatment of color, light, line and composition. He then arranged these works into an imagined composition set in a real space, the Louvre’s Salon Carré, with the intent of creating visual and thematic connections between the works. He populated the gallery with several figures admiring or studying art, and included himself at the center, instructing a female student who is copying a painting.

“Morse wanted his painting to visually communicate his ideas about the importance of European art to the development of American art and culture,” says Austen Barron Bailly, PEM’s George Putnam Curator of American Art. “He believed Americans had much to learn from the masterpieces of the Louvre he chose to copy and from museums, which he wanted to play as vital a role in American society.”

Tenacity and Technology
Throughout his career Morse was creative across many different media and explored how art and technology could transform communication. On his sail home to America, he sketched early designs for his telegraph machine on the back of a canvas stretcher. On a return trip to Paris in 1839 to secure a patent for his telegraph, Morse witnessed another new invention, the daguerreotype, the first practical form of photography. Immediately grasping its potential as a tool for faithful transcription, Morse learned the new medium and taught the process to many others in the United States.

“Morse was an early adapter, teacher and promoter of this new medium,” says PEM’s Byrne Family Curator of Photography Sarah Kennel. “Photography was a revolution in making pictures. He immediately understood the consequences of it.”

Inspired by Morse’s role as the ‘father of American photography,’ the exhibition includes more than 65 photographs, dating from the 1850s to today, that reflect the strengths of PEM’s photography collection, while echoing the spirit of curation, storytelling, and cross-cultural affinities embodied in Gallery of the Louvre. Featured are a dozen daguerreotypes as well as rare examples of portraiture, architecture and travel photographs from around the world. 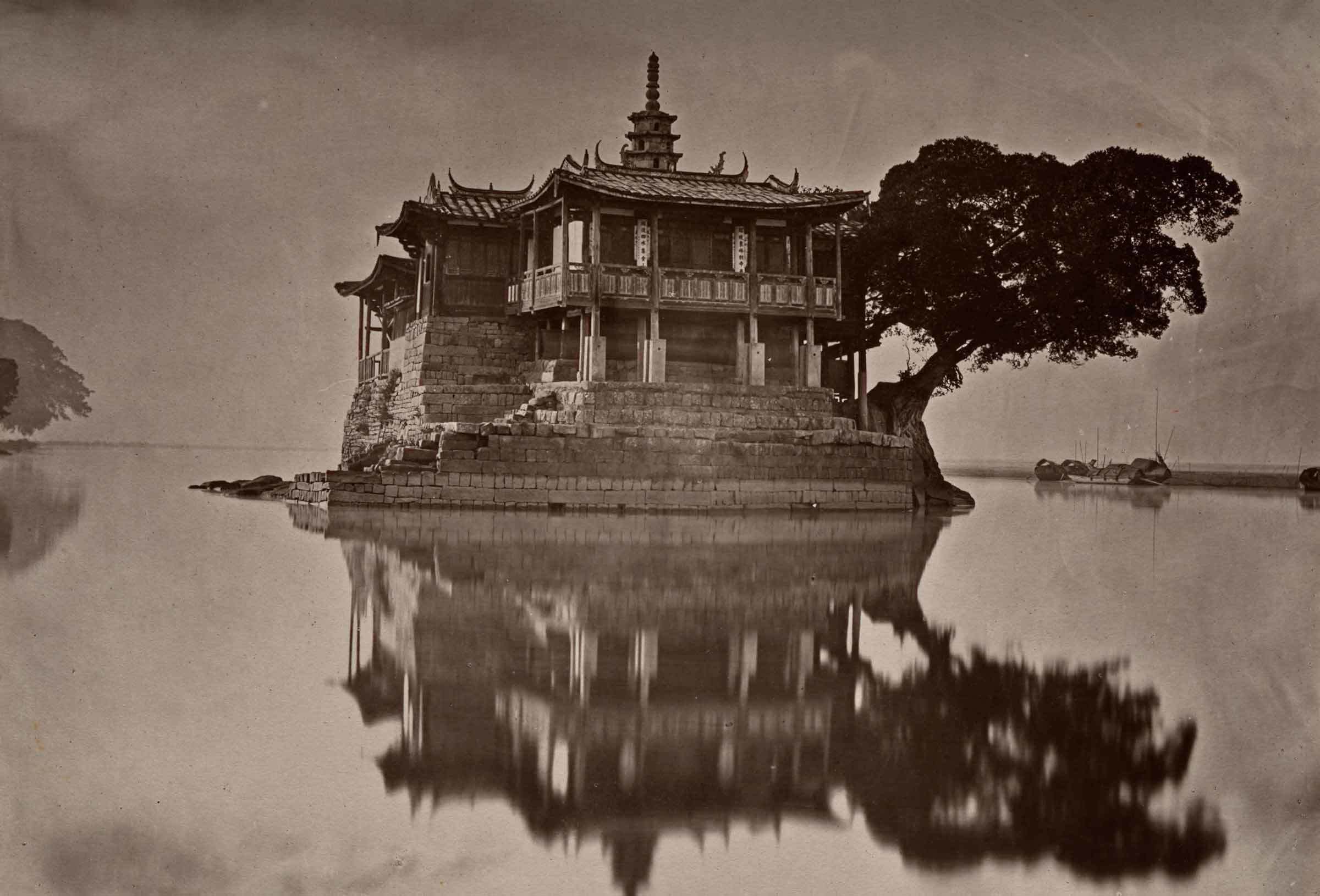 The desire to transmit images and ideas across time and culture has fueled creative and technological inventions since Morse’s era. “All of these elements — photographs, paintings and Morse code — are about communication and connection,” says Kennel. “Morse contributed to how we interface in a global world today. Zeros and ones are not that different from dots and dashes.”

PEM’S PHOTOGRAPHY COLLECTION
Dating to 1855, PEM’s photography collection tells the story of the medium over nearly two centuries, helping us to understand why and how photographs are made, and the important role photography has played in shaping visual culture and communication across the world. It includes some of the world’s finest 19th- and early 20th-century photographs of Asia, as well as historic and modern American photographs, especially related to New England, the maritime world and Native American life.

The earliest photograph in the collection is a daguerreotype of Pont Neuf in Paris, probably made by Vincent Chevalier in 1839, the year of photography's invention. Since that time the collection has grown significantly, and includes work by pioneering photographers William Henry Fox Talbot, Southworth and Hawes and Antoine Claudet. Major holdings of 19th-century Chinese and South Asian photographs are complemented by the archives of Edwin Hale Lincoln, Lala Deen Dayal, and Samuel Chamberlain, a complete set of exhibition prints by Edward S. Curtis, a handsome group of modernist works by Walker Evans, more than 200 rare Civil War photographs by Mathew Brady, and extensive archives of photographs made in the Philippines and American Samoa. Recent acquisitions include vintage prints by Diane Arbus, Nicholas Nixon and Milton Rogovin, as well as work by contemporary photographers Valérie Belin, Thomas Joseph Cooper, Olivia Parker and Toshio Shibata, among others.

EXHIBITION CREDIT
‘Samuel F.B. Morse's Gallery of the Louvre and the Art of Invention’ is organized by and with support from the Terra Foundation for American Art.

EXHIBITION PUBLICATION
Edited by Peter John Brownlee, curator at the Terra Foundation for American Art, ‘Samuel F.B. Morse's Gallery of the Louvre and the Art of Invention’ features a collection of essays that bring together the fresh insights of academics, curators, and conservators, who focus on the painting’s visual components and cultural contexts. Available in the PEM Shop, in person or online at: www.pemshop.com

PUBLICITY IMAGES
High-resolution publicity images and captions are available for download from the following link: goo.gl/i5E4yv

ABOUT THE PEABODY ESSEX MUSEUM
Over the last 20 years, the Peabody Essex Museum (PEM) has distinguished itself as one of the fastest- growing art museums in North America. Founded in 1799, it is also the country’s oldest continuously operating museum. At its heart is a mission to enrich and transform people's lives by broadening their perspectives, attitudes and knowledge of themselves and the wider world. PEM celebrates outstanding artistic and cultural creativity through exhibitions, programming and special events that emphasize cross-cultural connections, integrate past and present and underscore the vital importance of creative expression. The museum's collection is among the finest of its kind boasting superlative works from around the globe and across time -- including American art and architecture, Asian export art, photographs, maritime art and history, Native American, Oceanic and African art. PEM's campus affords a varied and unique visitor experience with hands-on creativity zones, interactive opportunities and performance spaces. Twenty-four noted historic structures grace PEM’s campus, including Yin Yu Tang, a 200-year-old Chinese house that is the only such example of Chinese domestic architecture on display in the United States, and the Phillips Library, which holds one of the nation’s most important museum-based collections of rare books and manuscripts. HOURS: Open Tuesday-Sunday, 10 am-5 pm. Closed Mondays, Thanksgiving, Christmas and New Year's Day. ADMISSION: Adults $20; seniors $18; students $12. Additional admission to Yin Yu Tang: $6. Members, youth 16 and under and residents of Salem enjoy free general admission and free admission to Yin Yu Tang. INFO: Call 866&dash;745&dash;1876 or visit pem.org