On his first day at PEM, Brian Kennedy told the staff that their first priority is to be human.

As the museum’s new Rose-Marie and Eijk von Otterloo Director and CEO, replacing Dan Monroe after 26 years, Kennedy said, “Before you are anything, you are a human being.” As a human we have two obligations, he continued, to those gathered at 9 am in PEM’s East India Marine Hall. One is for us to be present in our own lives and the other is to act in a way that is humane. 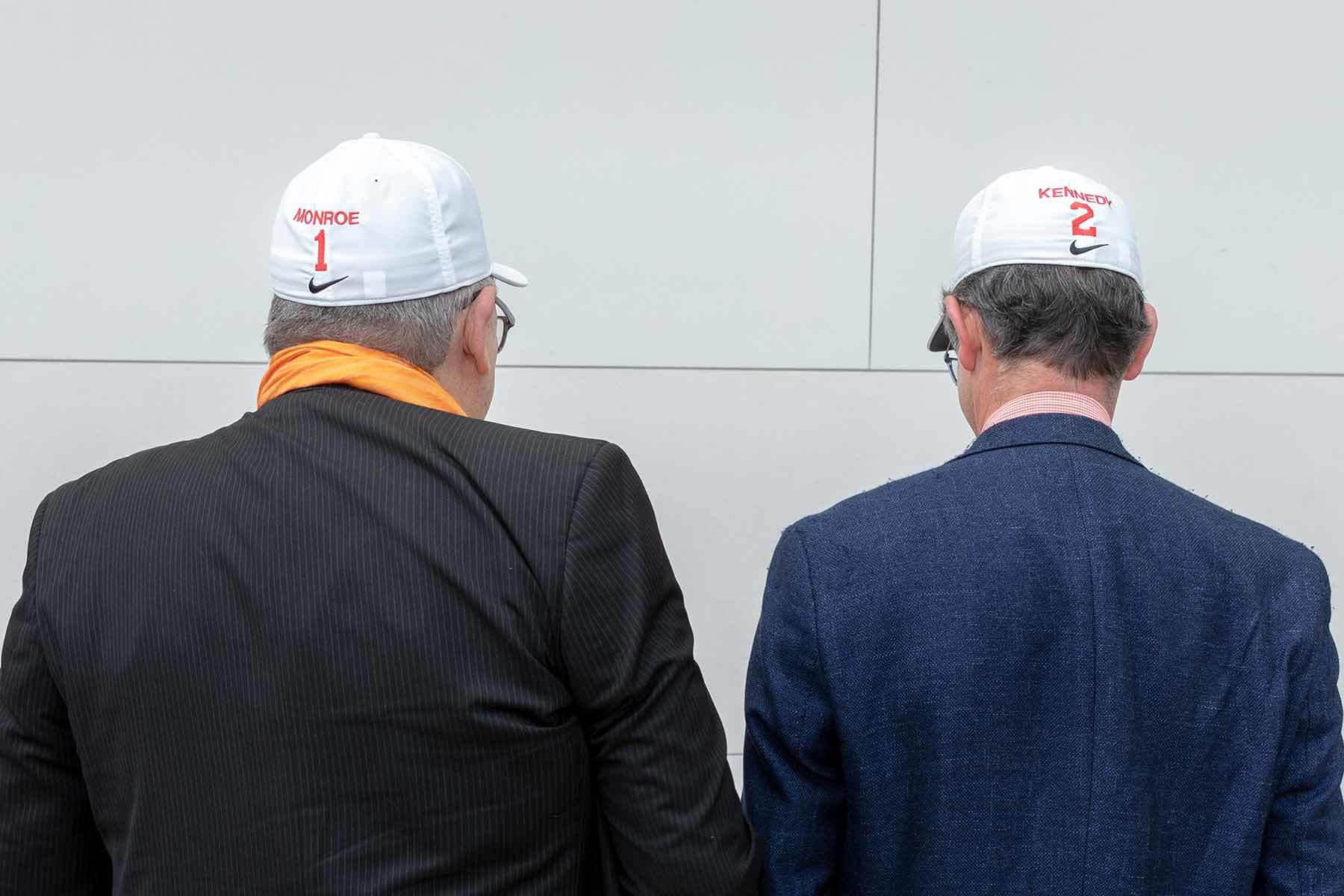 Together, he said, we will focus on how we treat people and we'll focus on their feelings and their experiences. 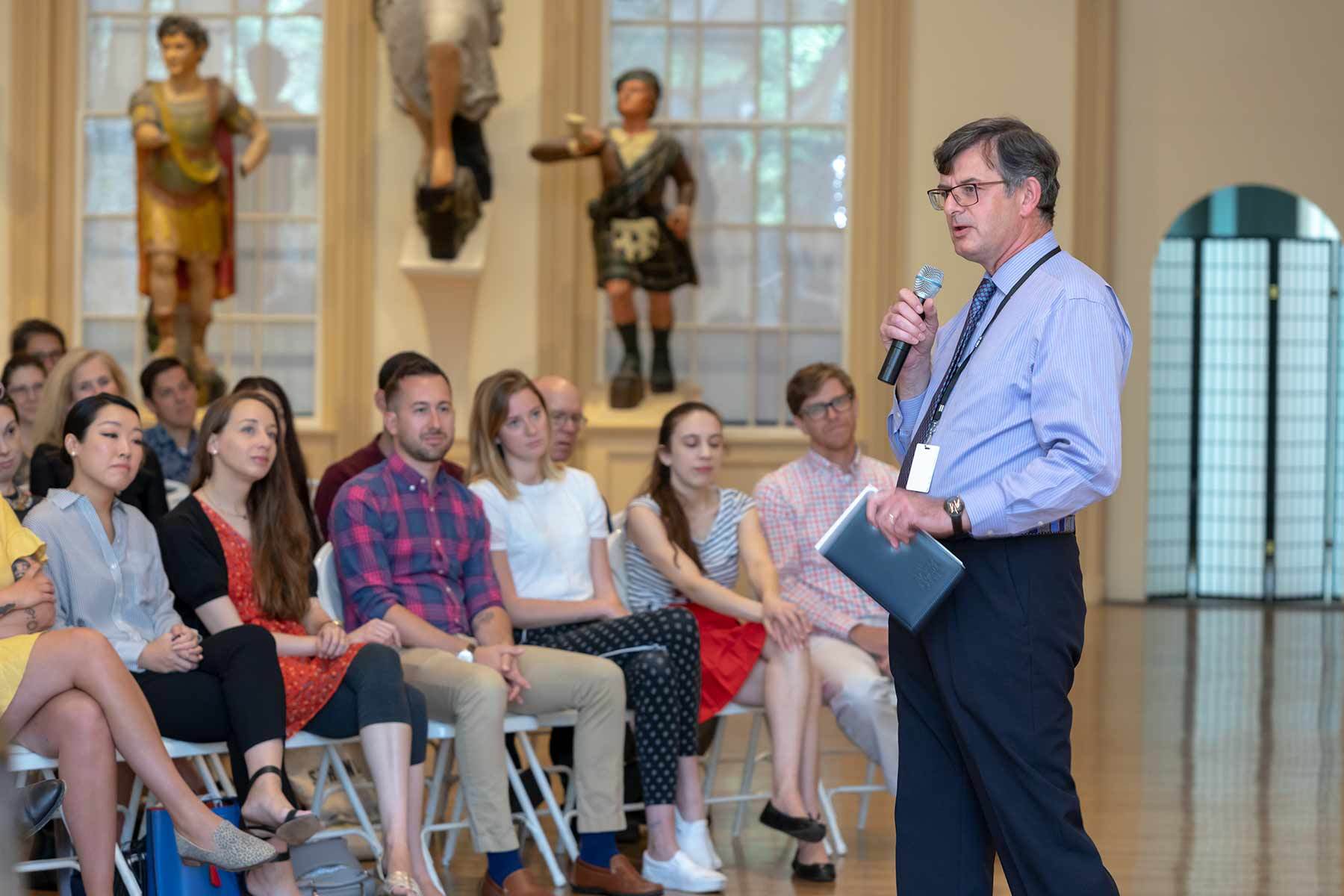 Kennedy specifically chose East India Marine Hall to kick off his first day, he told staff members, because it is the heart of the museum. He challenged us to honor the museum’s history by thinking like its founders, who, beginning in 1799, brought back knowledge and objects from their global explorations to share with others. He asked us to think about what motivated these founders to travel to the other side of the world, before encouraging us all to embrace curiosity.

He brought up the fact that today, July 15th, is known as Marine Day in Japan and asked Dan Finamore, PEM’s Russell W. Knight Curator of Maritime Art and History, to explain the holiday. “Today is the day everyone in Japan lets down their hair and goes to the sea,” said Finamore. Japanese people, on this day, celebrate the bounty of the sea, economically and culturally and through their cuisine. People also look out from their island nation, said Finamore, to think about other places and their cultures. He added that many of the same themes about the sea, its influence and the way it connects us, will be found in PEM’s new Maritime Gallery when it opens this September. Also, he added, the very first sea journal in PEM’s Library was a voyage to Japan in 1799. 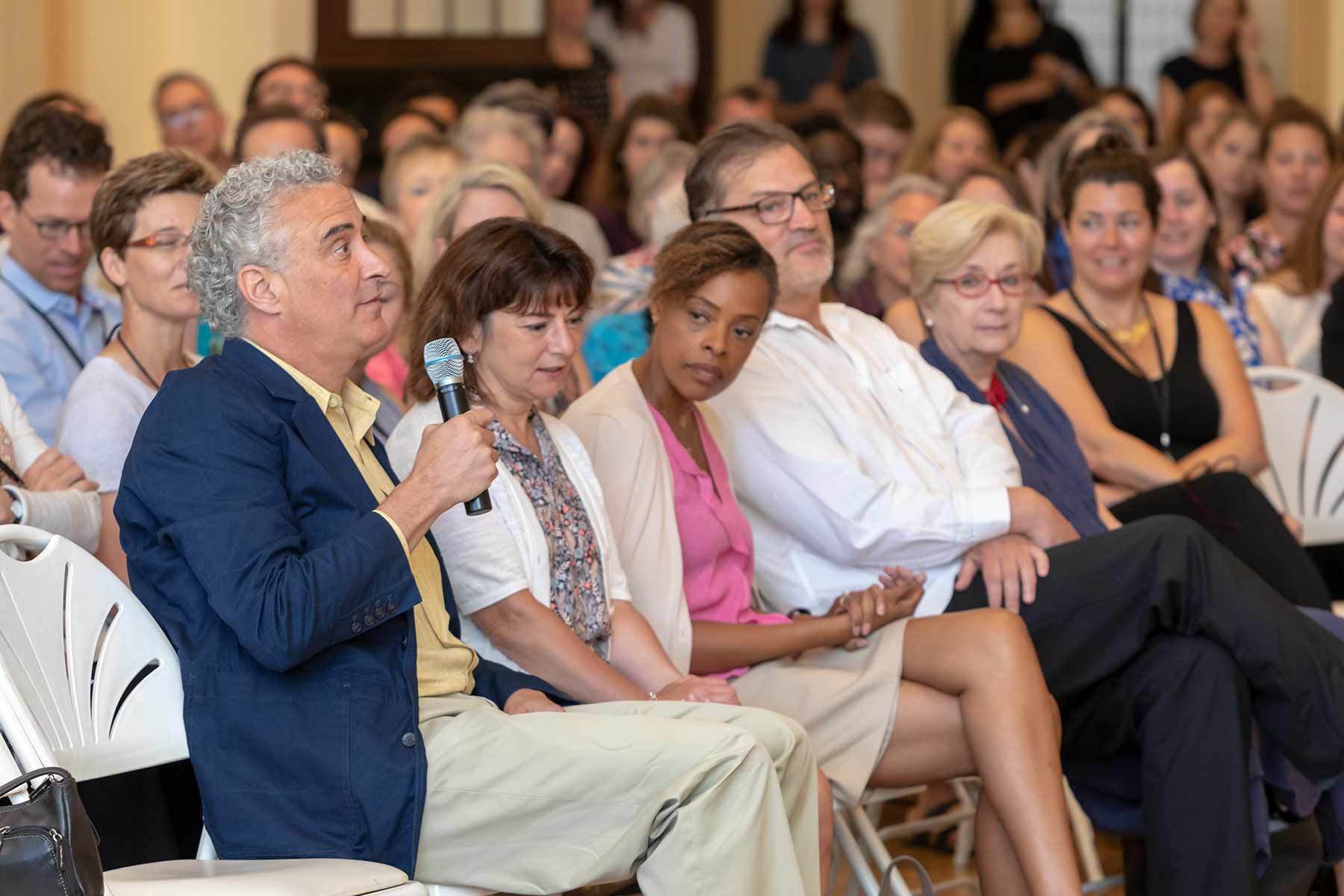 No U.S. museum has a more fascinating history than PEM’s, said Kennedy. Of its founders, the East India Marine Society, he said, they went around the world and met new people and had poignant multisensory experiences unlike any they'd had before, filled with new sights, sounds, feelings and tastes. “And what they saw was extraordinary to them,” he said.

There’s no question that PEM inspires us to travel to new places, said Kennedy, but it also is about being where you are and thinking locally, he said, adding that today in 1606, Rembrandt was born, a man who made a global influence while never leaving Holland.

He shared other first days he’s had, at Dartmouth College, where he was director of the Hood Museum of Art, when he asked the staff to walk to Dartmouth Green and note that the museum could not be seen from there. Their task was to expand the museum so that it could be a better visual fixture. He said that on his first day as director and CEO of the Toledo Museum of Art, he took the staff to sit on the stage of the Peristyle, a 1750-seat concert hall where the Toledo Symphony plays, in order to talk about attracting audiences.  “First days are really important...and where that happens,” he said. Which is why he chose, said Kennedy, to have us meet under the figureheads of the ships that took our founders around the world. To begin where we began.

In his first hours in Salem, Kennedy shared that he’s hopped aboard the Salem Trolley for a tour. He filled a suitcase full of catalogs from PEM’s many exhibitions and has brought them home to pore over them. He visited the museum over the weekend and observed visitors engaging with the place. He encouraged the staff to listen to what others say about PEM and to gather those sentiments, as well as our own thoughts about our individual work at the museum and on what can be improved. What do we want to do? What do we want to stop doing?

The importance of being honest and being open is important to PEM's new director. “It’s not just that my door is open,” he said. “But if you don’t tell me what you’re thinking then you are not being present to me.” 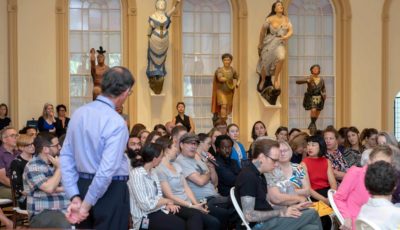 A member of the staff asks a question.

The staff gave Kennedy a standing ovation, before getting back to work. 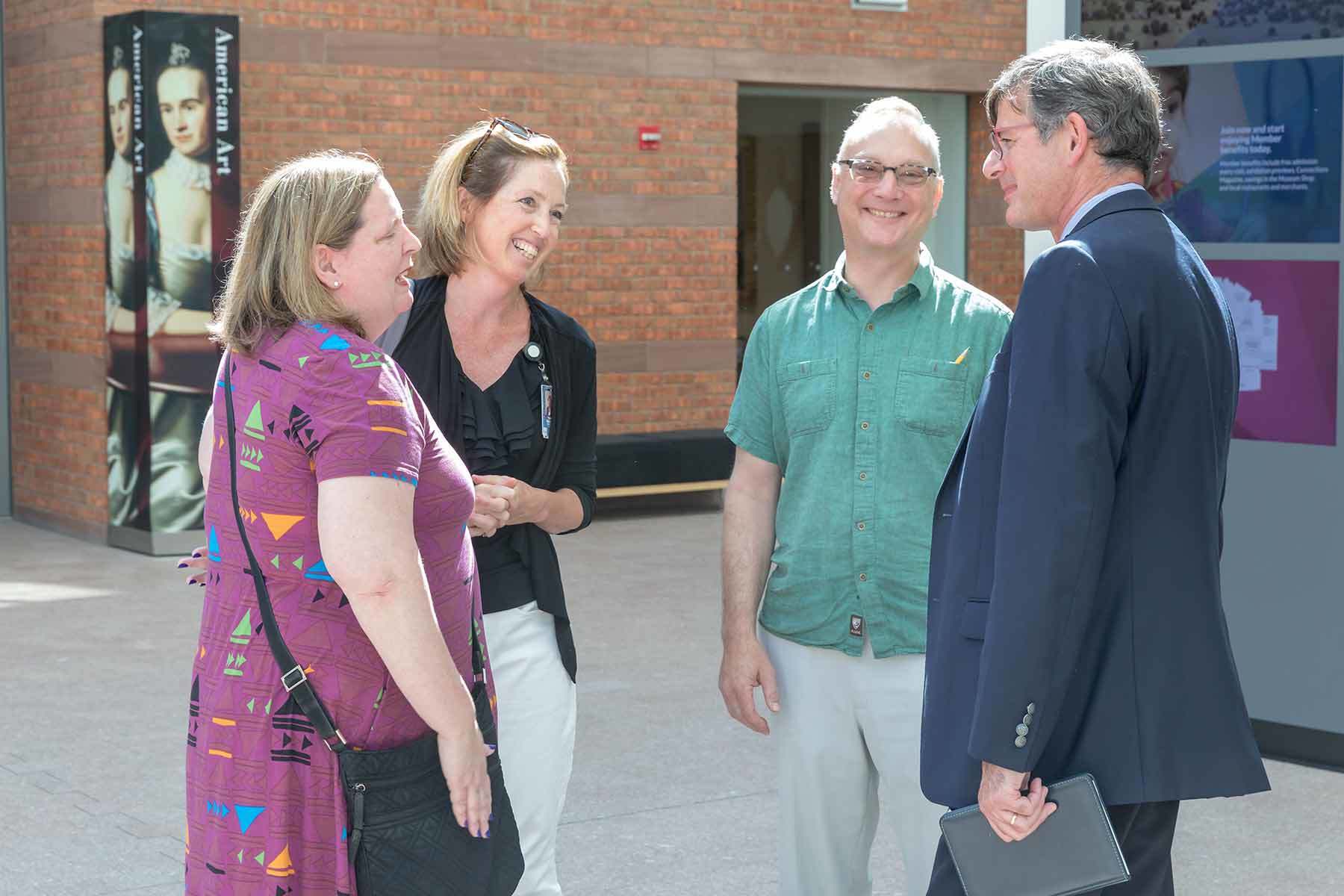 Staff chatting with Brian Kennedy after his speech. 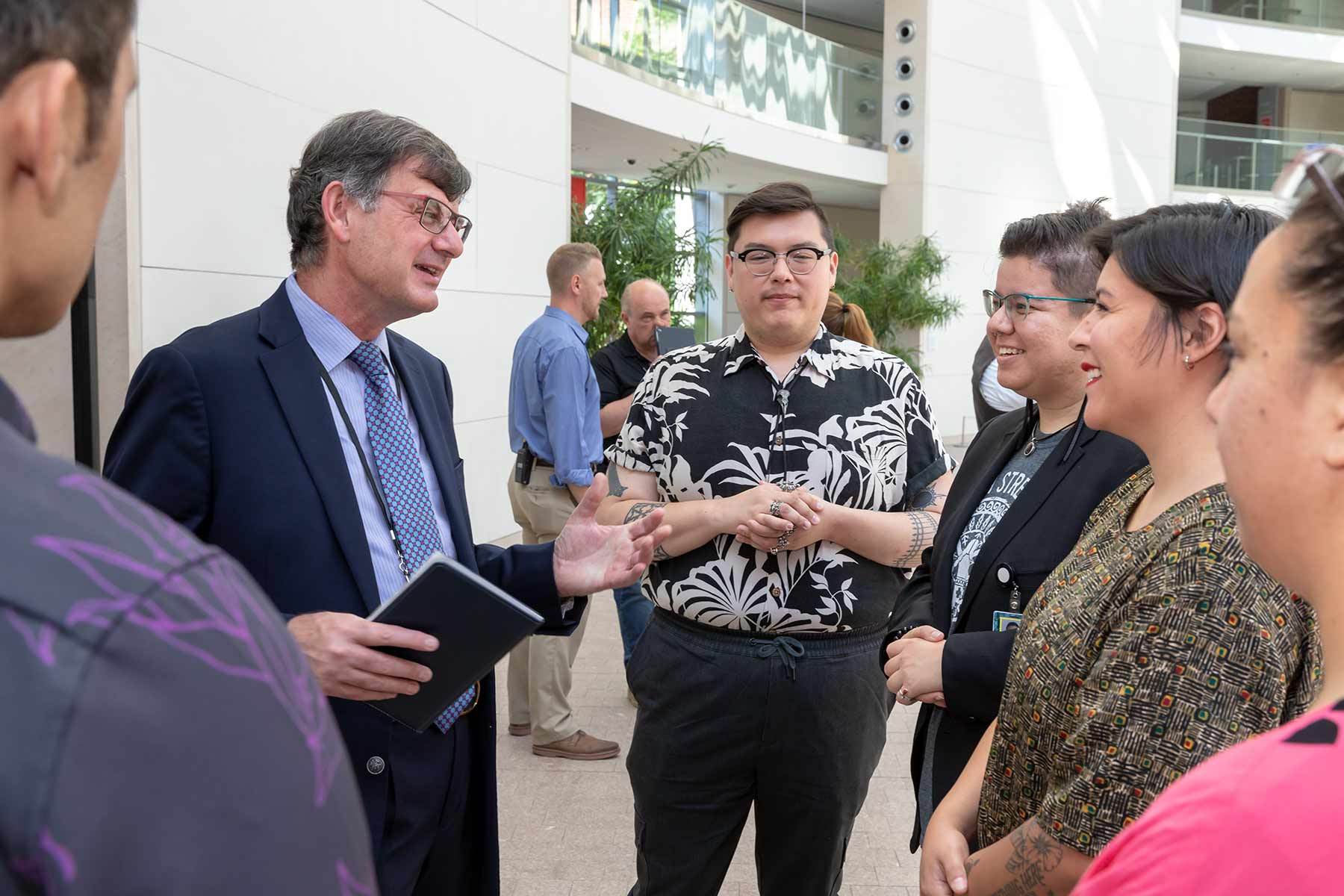 Brian Kennedy chatting with some of the Native American Fellows. 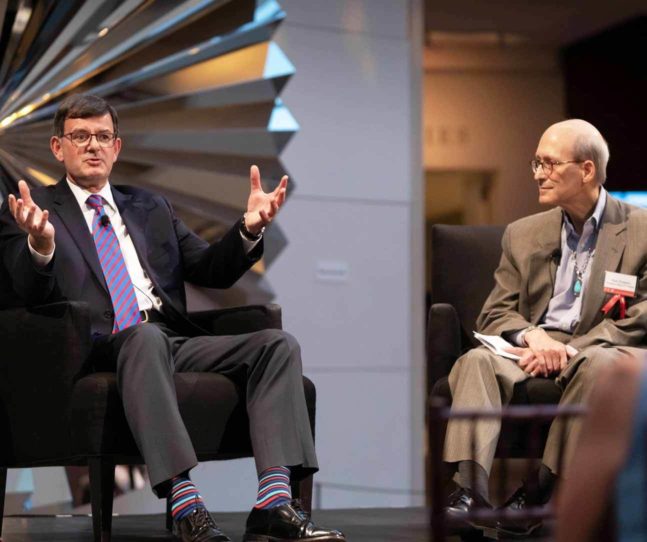 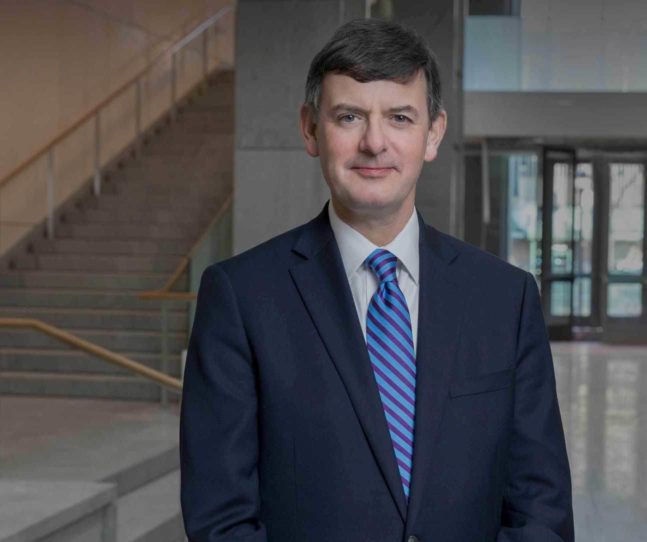 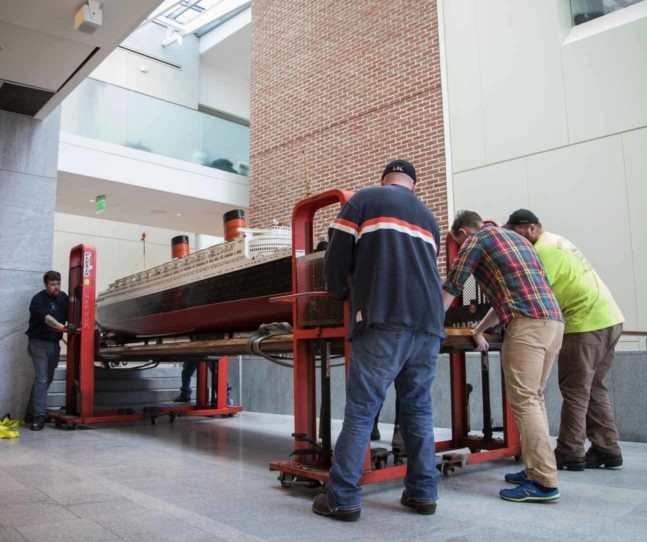