This awful Thinker: seen from his left, he looks like a bird of prey contented with the vengeance he has meted out to the vile of the earth; a composition of physical and mental dominance, and effect of personality seemingly without rival in all sculpture of the world. 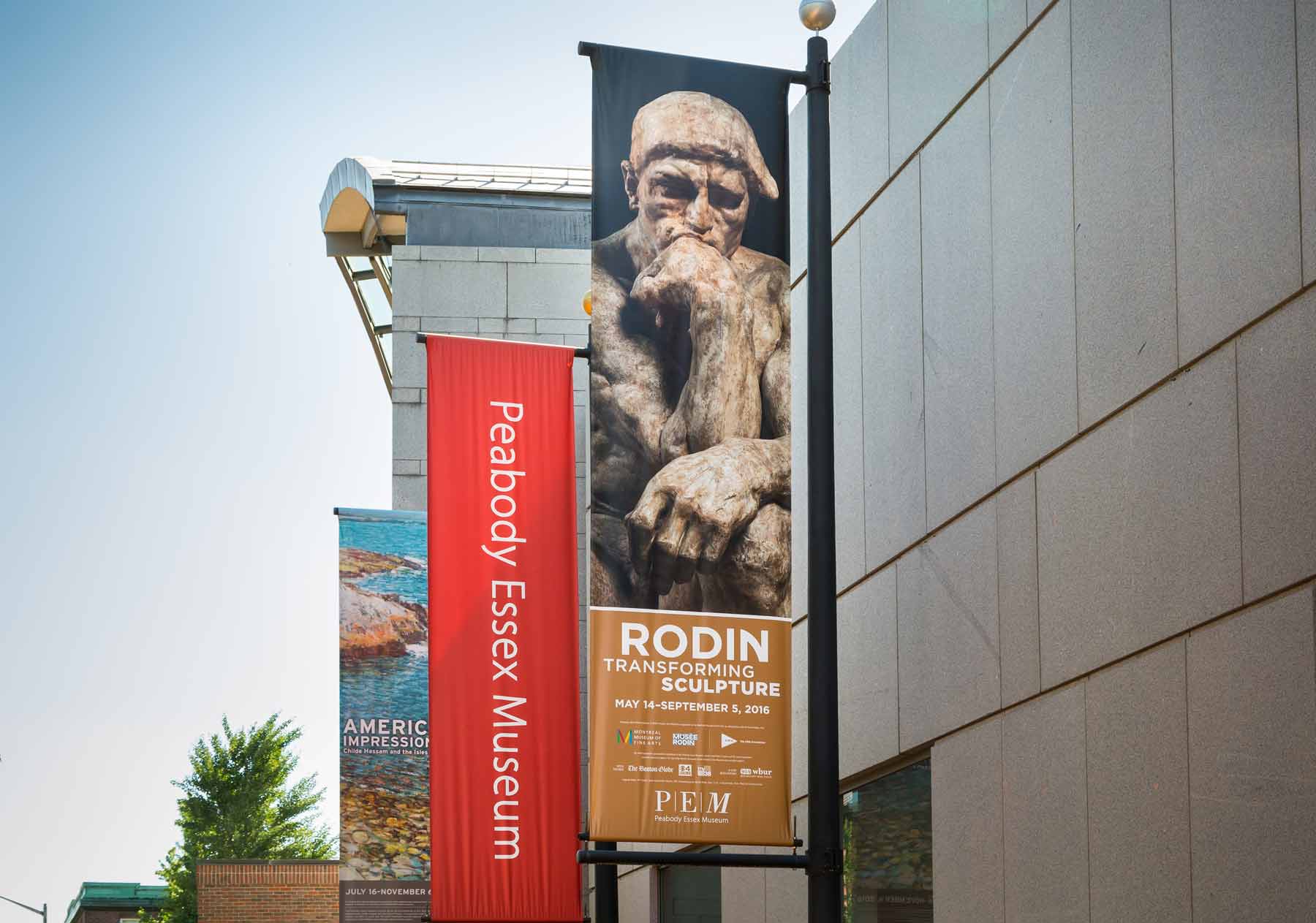 Beloved and reviled, iconic yet obscure, Auguste Rodin’s The Thinker is quite arguably the most recognizable if not the single most iconic work of Modern sculpture. I’ve been thinking about this while watching the work be uncrated and placed in our gallery and then receiving so much fanfare during the opening of our latest exhibition Rodin: Transforming Sculpture.

The Thinker, like the Mona Lisa or American Gothic, is a work that has transcended the elitism of the art historical canon to enter into the popular imagination. A cursory check of Amazon.com will find Rodin’s seated muscle-bound Adonis endlessly reproduced at varying scales in the form of bookends, magnets, garden statuary, and, rather surprisingly, as a toilet decal. Why has The Thinker emerged over the past century as a major visual and cultural touchstone?  Like with most other now “classic” works of art, our understanding of The Thinker is shrouded in misinformation and legend, some of which I hope to be able to clear up below:

While most of us know The Thinker as a towering, massive, isolated work of art, what many don’t know is that The Thinker was originally part of a much larger sculptural group known as The Gates of Hell, a work commissioned by the French government in 1880 to serve as the entryway to a never released Museum of Decorative Arts in Paris. Originally titled The Poet in reference to Dante, whose Divine Comedy served as a source of profound inspiration for Rodin, a much smaller Thinker (about 27 inches in height) presides over the tumultuous hellscape below, his brow furrowed in contemplation. 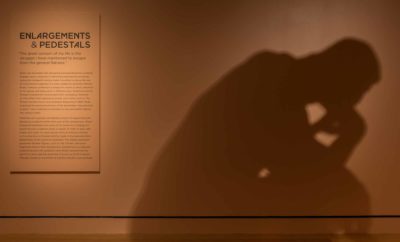 Like many of the other forms imagined forThe Gates of Hell, The Thinker was destined to become a standalone, independent work. First isolated in 1888 at its original scale, the colossal (72 inches) Thinker that we think of today was first executed in the early 1900s and was an immediate critical and popular success. In fact, the enlarged version of The Thinker is said to have resuscitated Rodin’s waning career at the beginning of the 20th century.

There are approximately 25-30 (this number is still up for debate) official enlarged bronze casts of The Thinker in museums and collections around the world (see list below). Rodin oversaw the execution of around 10 of these during his lifetime, the remainder of which were completed posthumously under the control of the Musée Rodin in Paris. There are also several large-scale plaster casts of The Thinker, including the one that can currently be viewed at PEM. 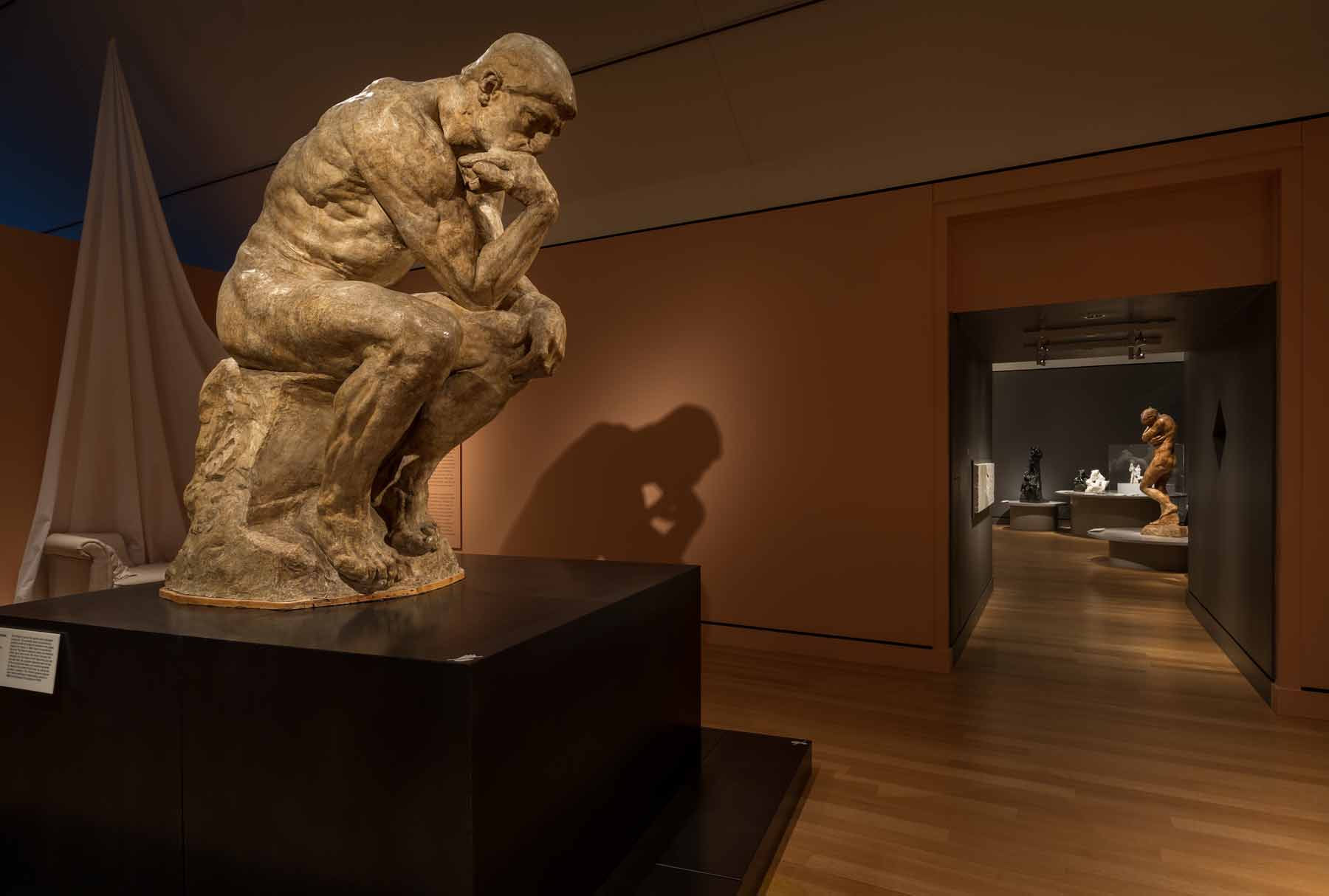 As a testament to its popularity amongst the French citizenry, a public subscription was organized with the aim of purchasing an enlarged bronze cast of The Thinker for display in front of the Panthéon, the hallowed final resting place of many of France’s most important historical figures. In late 1904 Rodin place a patinated plaster maquette of the work in the spot in which the final bronze cast would appear. After only a month of public view, The Thinker was destroyed by a mentally disturbed man by the name of Poitron who believed that the sculpture was mocking him. Ever resilient and emboldened, Rodin created a bronze cast of The Thinker to serve as a monument to the French public. The Thinker sat in front of the Panthéon until its removal in 1922 at the behest of conservatives who worried about the sculpture’s socialist connotations…not the only time the work would become embroiled in political controversy.

On March 24, 1970, the Cleveland Museum of Art’s enlarged bronze cast of The Thinker, one of the last castings done under Rodin’s supervision, was irreparably damaged by a dynamite explosion allegedly orchestrated by the militant radical left-wing organization The Weather Underground. When detonated, the three sticks of dynamite placed on the outdoor sculpture’s pedestal destroyed The Thinker’s base and lower legs, knocking the entire sculpture to the ground and leaving the work permanently disfigured. Instead of undertaking invasive restoration work, the Cleveland Museum of Art decided to preserve what was left of Rodin’s sculpture in situ, where it remains to this day. Separated by half a century, these two episodes of violence and censorship speak to the powerful symbolism that has politicized and radicalized The Thinker over the years. 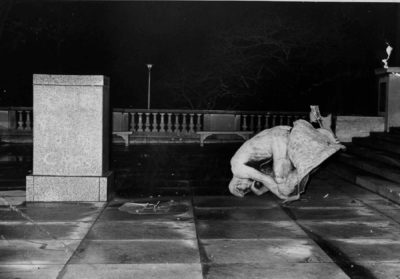 The Thinker post-bombing at the The Cleveland Museum of Art. Courtesy photo

A bronze cast of The Thinker serves as Auguste Rodin’s headstone at his gravesite at the Musée Rodin at Meudon, the artist’s residence in the southwest suburbs of Paris. Rodin’s selection for such an important monument speaks to the deep personal significance of his work. 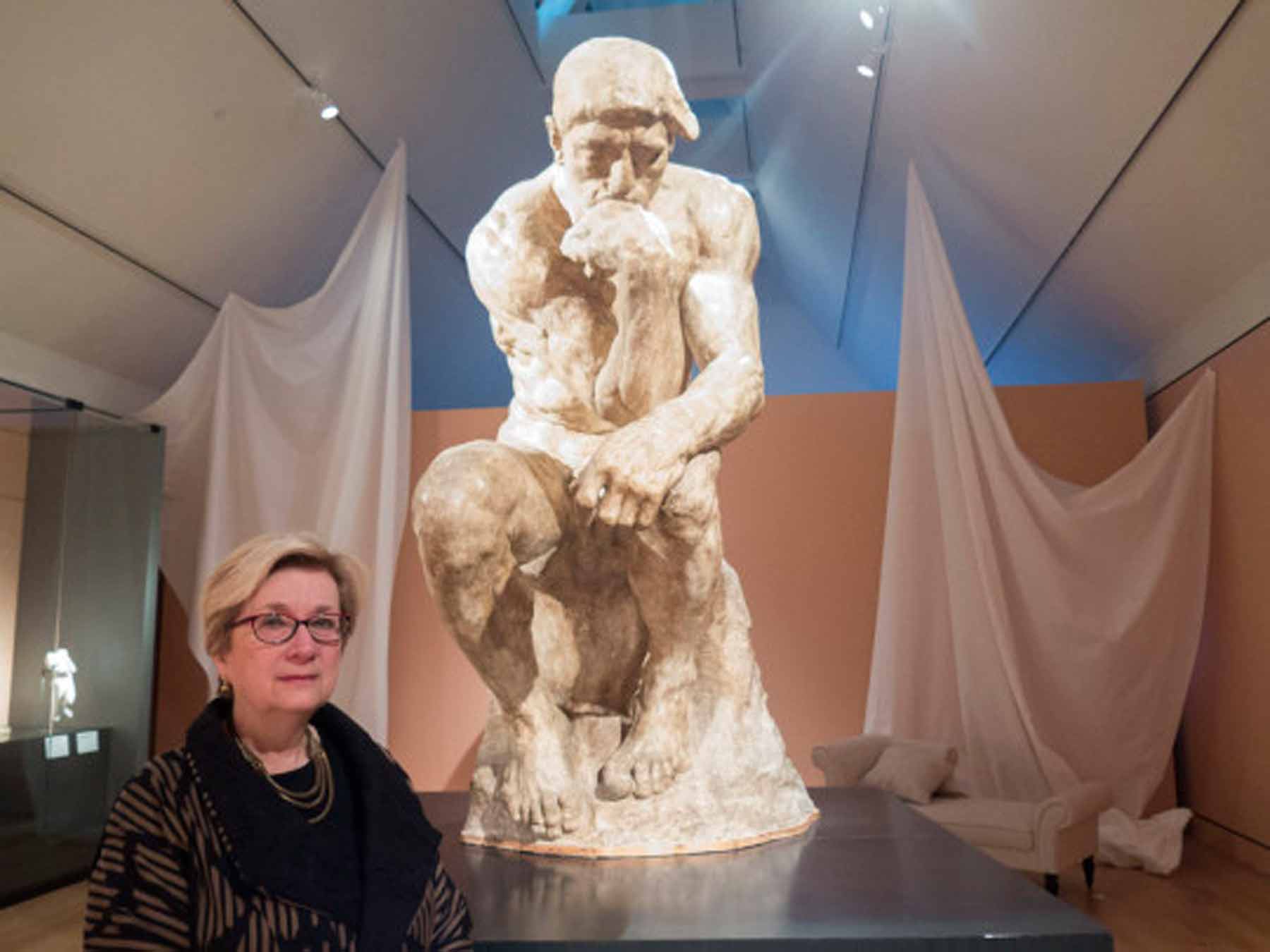 Lynda Roscoe Hartigan, deputy director of the Peabody Essex Museum and co-curator of the exhibit “Rodin: Transforming Sculpture,” stands in front of Rodin’s “The Thinker.” Photo by Andrea Shea/WBUR