The astronaut and the artist

Staring starry-eyed at the glass world that sits in one of our American art galleries, it is easy to imagine you are peering down at Earth from a far-off spacecraft. For NASA astronaut Catherine “Cady” Coleman, our imagination is her reality. Cady’s background includes two missions aboard the Space Shuttle Columbia, a six-month stint on the International Space Station, and working as an adviser on the Academy Award winning sci-fi film, Gravity. 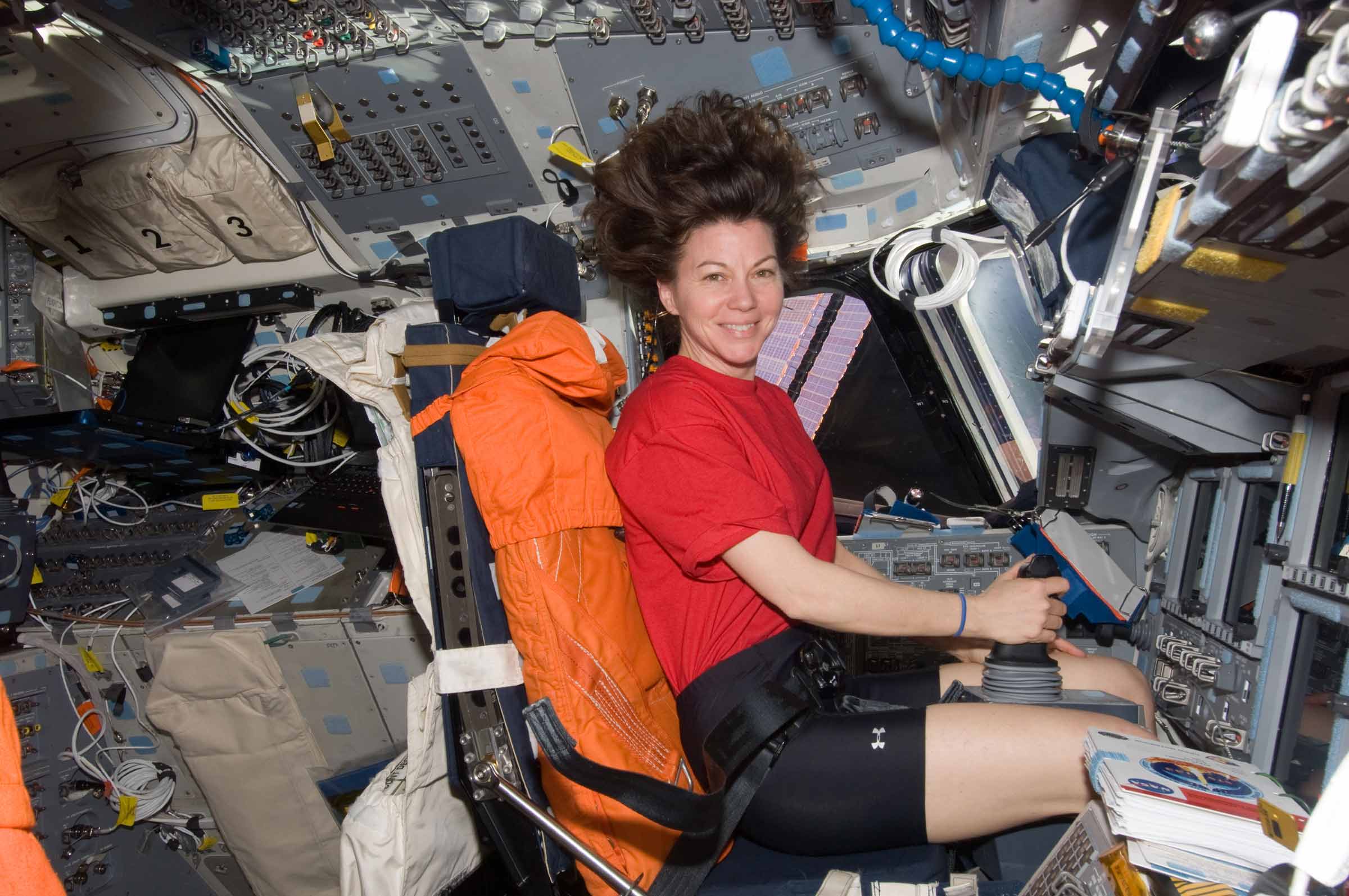 This month holds a much shorter trip for Cady, who is traveling to the museum during February School Vacation week for our Lunar Landing 2.0. And while she will be sharing stories and photos from her time in space, her connection to art is surprisingly close to home. In fact, Cady has a personal history with that captivating glass world in PEM’s collection. Our “megaplanet” was made by contemporary glass artist Josh Simpson, Cady’s husband. 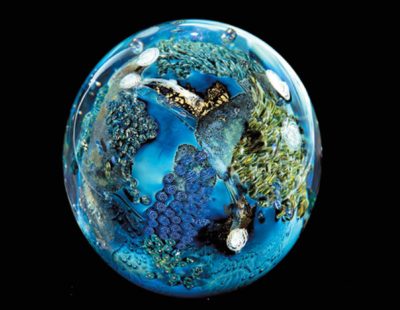 While Cady was floating above our planet, Josh was creating his own at their studio in Western Massachusetts. The two have been telling their story for years, at TED talks and joint lectures, with many noting how they perfectly breach the divide between art and science. However, the cosmic couple says it all was nothing more than a little fate…

It is strange and inspirational and ironic… really ironic.

They met when Cady accidentally called the wrong phone number. Josh was on the other end and after a playful back-and-forth, Cady knew she was going to have to call back. Josh eventually invited Cady, who was working for the American Air Force in Ohio at the time, to come visit his studio in Shelburne Falls, Massachusetts and, low and behold, “She did!” Two weeks later they met in person.

Soon, Josh and Cady discovered their mutual interest in all things space. Fascinated by the first American woman to fly in space, Sally Ride, Cady set her sights on being an astronaut and there were no complaints from Josh.

As a lifelong astronomy enthusiast who was infatuated with “the Mercury seven,” Josh was already incorporating the night sky into his glass, be it meteors, thunderstorms or auroras. Living on an expansive farm with low light pollution and the “greatest night skies” provides the best inspiration, and Josh use to enjoy his walk to adjust the furnaces at varying hours of the night (before everything was automated). Despite any bad weather or lack of sleep, the trek to his studio was a chance to look up and discover concepts for his next project. 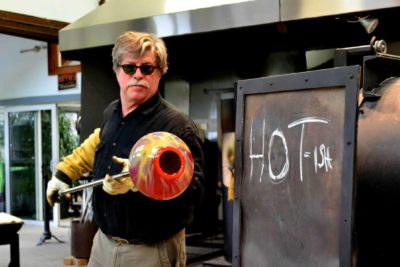 “Josh adding a spaceship into the atmosphere of this special Megaplanet.” Photo from @joshsimpsonglass on Instagram. 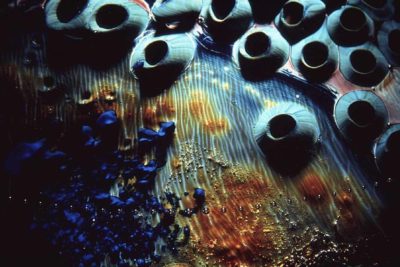 “Volcano detail looking down from a spaceship.” Photo from @joshsimpsonglass on Instagram. 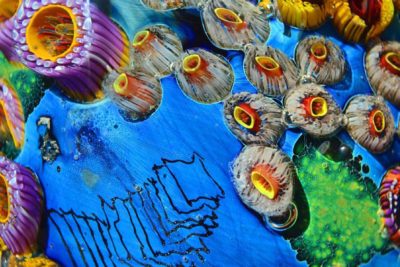 “Clear blue water is emerging between islands made of platinum leaf! Detail of a Megaplanet.” Photo from @joshsimpsonglass on Instagram.

For Cady, it is the “explorer and the geek” in her that finds Josh’s art enamoring. The way Cady looks at things is not necessarily the way an artist would. That is where Josh comes in, dragging her outside to point out happenings in the night sky. And while Cady can track the ISS across the sky, spot specific constellations and list the coordinates of various satellites, Josh is there to help her embrace the moment and say, “Yeah, but just look at how pretty the sky is!”

Josh, on the other hand, draws creative ideas from just being married to an awesome and intelligent astronaut. Cady spent 24 years working with the space program (retiring this past December). Both Cady and Josh basically had a seven day work week, but traveling between Massachusetts and Texas allowed for all sorts of imaginative investigation (Cady’s Twitter is a particularly good place to see pictures of her adventures). The two agree that, “you can either be bummed out about it or you can embrace it,” and when you both are completely in love with what you do, embracing it is simple.

“NASA takes care of their astronauts’ spouses,” Josh points out, “they have incredibly dangerous jobs and the program wants you to know your loved ones are being looked after.”

One of the perks of being a NASA-husband is behind-the-scenes access to some of the space program’s treasures. Josh has definitely taken NASA up on their hospitality, climbing into rockets and exploring the facilities.

For years Cady sat directly across the hall from the observation office. That is where you could find Josh, going through reams of 120mm film, inspecting images and collecting design ideas for his glass. Not to be outdone by NASA though, Cady took something close to 5,000 photos during her first flight into space, which would serve as major creative fuel for Josh and his glass. 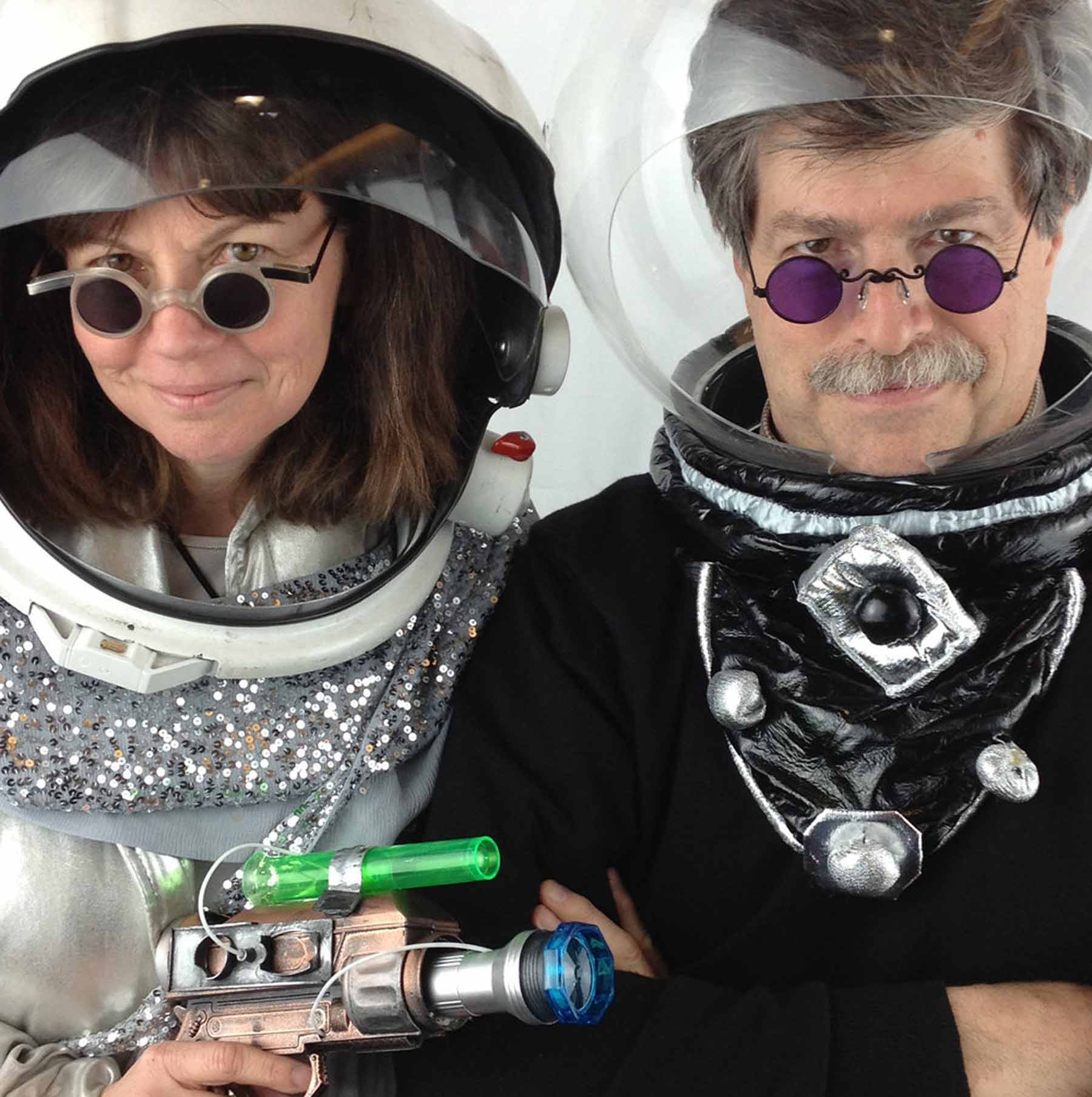 “The astronaut and the artist.” Photo from @joshsimpsonglass on Facebook.

The two have also collaborated beyond the Space Center and the hills of Shelburne Falls. Cady has taken Josh’s art to new heights, figuratively and literally, especially when it came to the “Infinity Project.” In 1976 Josh enlisted the help of others, as part of his Infinity project, to hide small planets in shipwrecks, castles, caves and other places for archaeologists to discover; hoping that someday his work would make it into a museum.

Though Josh’s art found its way into various museums, the Infinity Project continues to travel. There are even two hidden here in Salem for future diggers to stumble upon. His most difficult challenge though, was figuring out how to get his glass planets beyond Earth’s atmosphere. And as Josh likes to note, he had to marry an astronaut to make that happen. On her third and final trip with NASA, Cady took Josh’s planets aboard a Russian Soyuz rocket and into space. 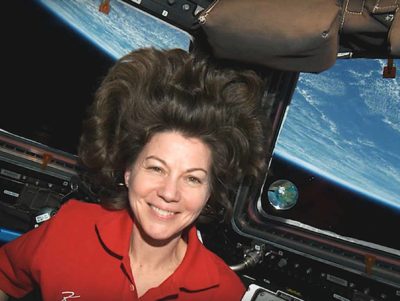 Cady with one of the planets she brought onto the International Space Station as a part of the Infinity Project. Photo courtesy of Josh Simpson and Cady Coleman.

The laws of attraction say you need opposites to connect, but having one highly specific commonality can spark a stellar story. The synergy between this couple’s chosen paths not only represents how art and science can coexist, but how it also becomes mutually inspiring.

Novelist John Robert Fowles put it best: “All good science is art. And all good art is science.” 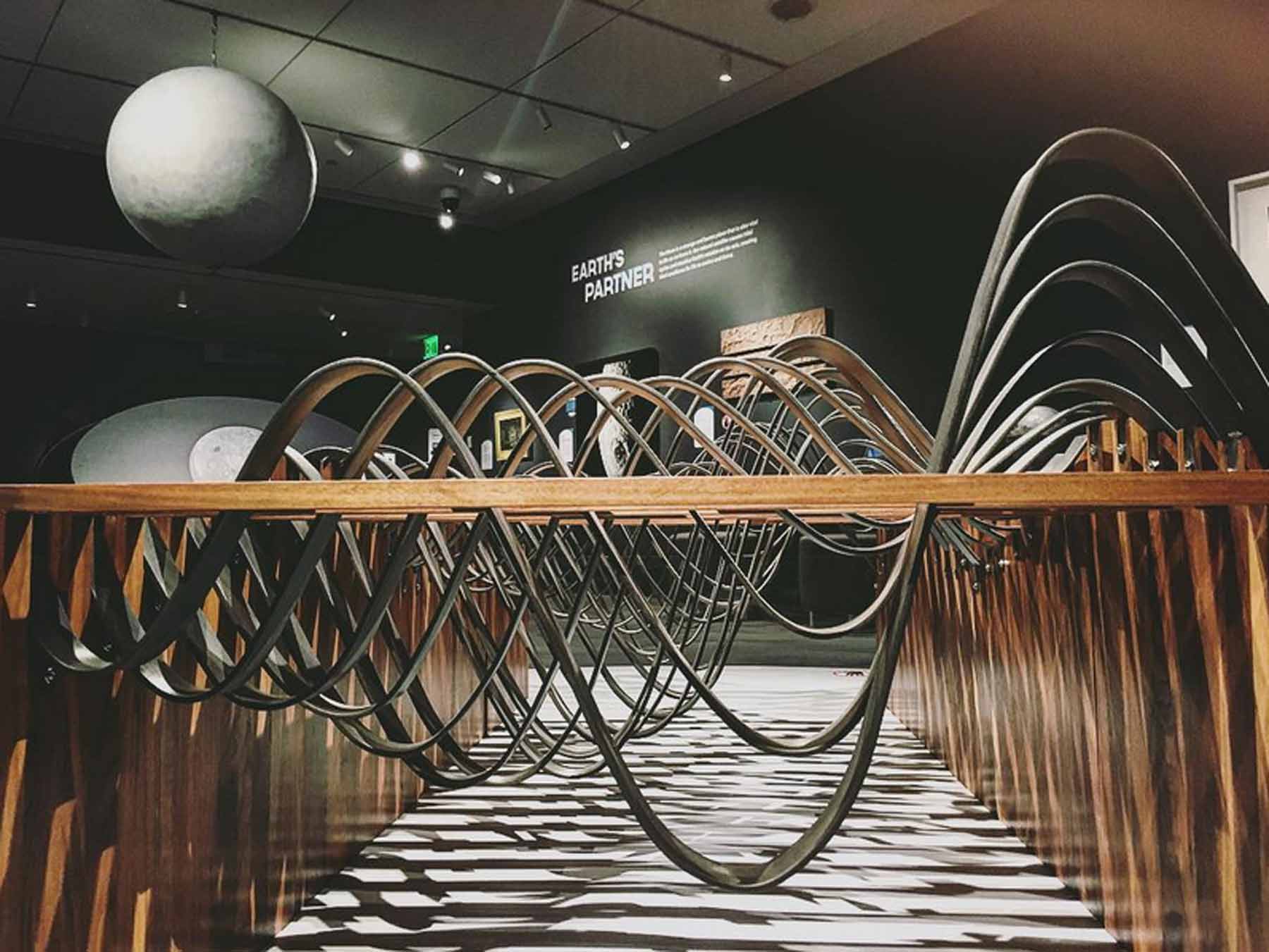 Adventures in tight places
Peeling back the layers