Neuroscience on the gallery floor

It’s 9:30 am on a Thursday, and the Nielsen Consumer Neuroscience group, helmed by Chief Neuroscientist Dr. Carl Marci, is setting up their “command center” in PEM’s Create Space.

Small zippered cases reveal tidily-nested sets of biometric instruments, laptops are opened, and small talk is quietly exchanged as the team settles in. Before long the day’s first participant “Diego” appears, sporting a robust handlebar moustache and a toothy grin. 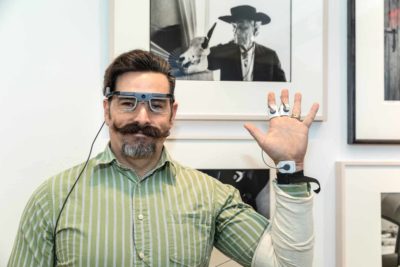 Volunteer Diego Martinez gets outfitted with eye-tracking glasses and sensors to keep tabs on his heart rate, breathing and changes in the electrical properties of his skin, before he tours the Georgia O’keeffe exhibition. Photo by Kathy Tarantola/PEM

Diego is one of three volunteers coming in over the course of the morning to work with PEM and Nielsen on the neuroscience of appreciating art in a museum setting. PEM’s ongoing Neuroscience initiative has been funded in large part by the Barr Foundation, enabling the full-time hire of Dr. Tedi Asher, who earned her PhD from Harvard Medical School’s Biological and Biomedical Sciences program. Nielsen Consumer Neuroscience is known widely for its neuroscience-based approach to generating consumer marketing insights — namely, what products and advertising consumers best respond to. 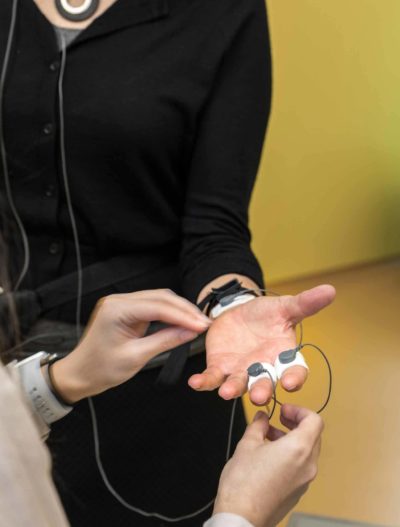 Working with Dr. Asher, the Nielsen testing will explore such questions as: How long will someone’s eyes dwell on a painting? How will they divide their time in a particular layout of art objects? How carefully do visitors tend to read wall labels? When will emotional spikes and increased “engagement” occur?

Diego is outfitted with eye-tracking glasses, a heart rate monitor and a galvanic skin response conductor, used to track emotional arousal through indicators like sweat and skin temperature. Once the instruments have been properly calibrated, Dr. Marci escorts Diego to the entrance of PEM’s new exhibition Georgia O’Keeffe: Art, Image, Style.

Diego is free to roam in the O’Keeffe galleries as he pleases from beginning to end, intermingling with other visitors in the morning bustle as Dr. Marci shadows, monitoring inputs from the sensors on an iPad. This process is repeated with two other participants later in the day: Kim, a friendly middle-aged interior designer and Troy, a gravelly-voiced punk rocker-slash-biotechnician.

All have very different points of view on the artwork, though all are equally fascinated by their biometric data as input flowed onto the command center laptop screen. “This is what it looks like inside my brain!” jokes Diego.

These Nielsen tests are the beginning of a long and winding road of discovery for Dr. Asher, PEM, and the museum field at large. While navigating previously uncharted territory -- an application of neuroscience to museum work — can be daunting, the insights and revelations the project is making, even at this stage, are wildly exciting.

Diego’s data turns out to be the cleanest of the three participants, so we dug deep on his results with Dr. Asher to share what we found. The standard method of displaying artwork in a museum requires labelling the piece with a “tombstone,” including the title, date and artist who created the piece, and often some context around its making, immediately adjacent to the piece itself.

In addition to this, large-printed “wall text” appears periodically in each new section of an exhibition, providing an overarching theme and an element of curatorial storytelling connecting art objects together. These texts, written collaboratively by curators and PEM’s in-house publishing team, is an opportunity to bring the artwork to life through a few impactful sentences. And impactful they are, as Dr Asher explains:

“We were able to observe in the eye-tracking data that the participant demonstrated a very distinctive pattern in how he viewed the artwork: he would consistently move his eyes from the label to the art object, back to the label, then back to the object, and so on. Strikingly, this process of relating the label content to the work of art was emotionally arousing for the participant, as his biometric measurements tended to peak when he was engaged in this behavior.” This finding speaks to the ability of in-gallery education to enhance the museum experience. 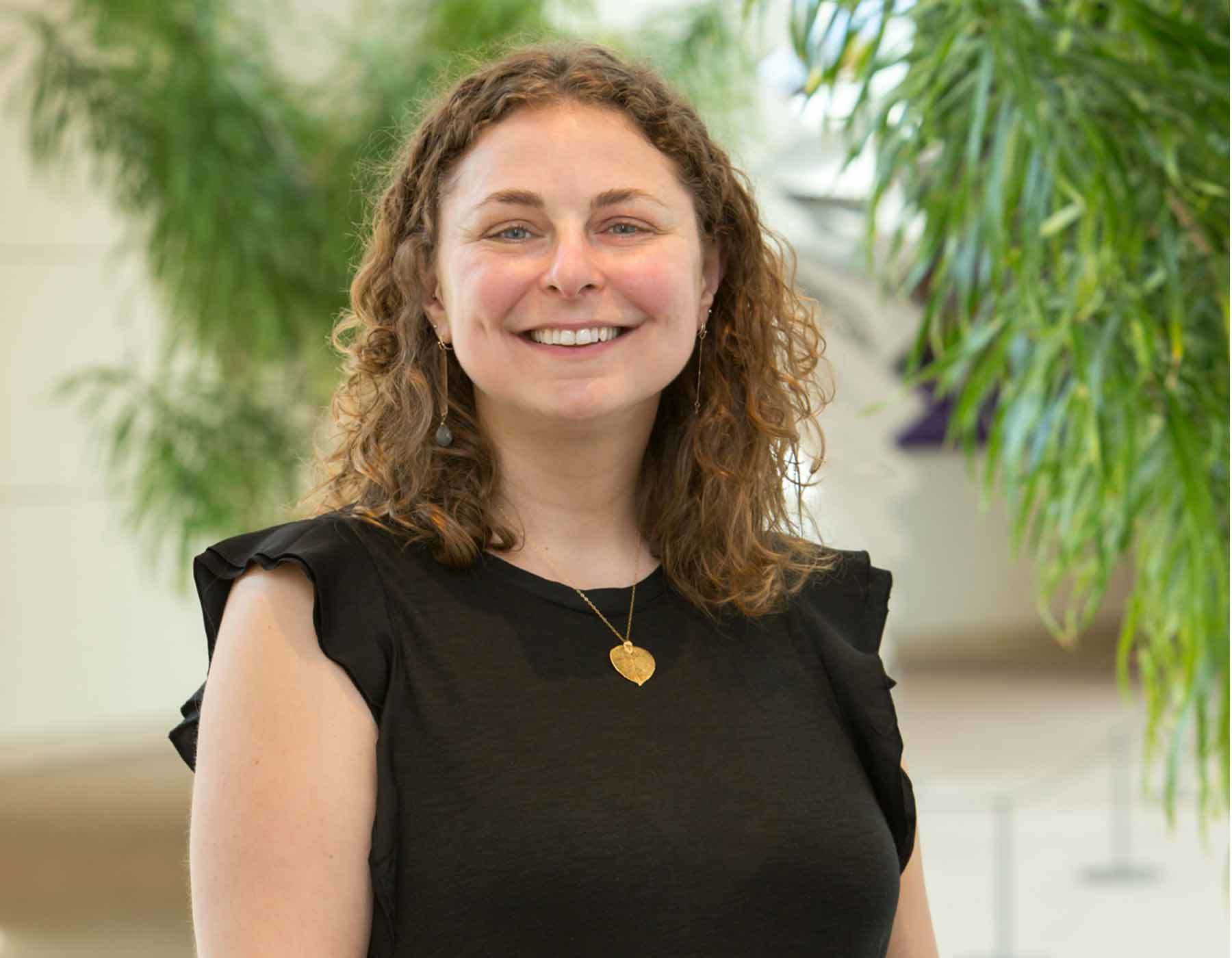 Another interesting point is that participants’ self-reporting on their experience at times conflicted with their biometric data. For example, in PEM’s exit interview with Diego, he claimed that he tended to focus on the center of O'Keeffe's paintings; however, his eye-tracking data reflected that he instead focused on points of contrast in the painting, irrespective of where they were located on the canvas.

It is my hope that moving forward we will be able to apply this type of analysis to address particular hypotheses about exhibition design,” continues Dr. Asher. “Biometrics report emotional experiences that participants may not be aware that they are having. It is a very sensitive measurement. Therefore, we have access to a whole layer of visitors' reactions that we would miss if we relied on self-report measures alone.

Dr. Asher is currently participating in MuseumNext, the conference on the future of the museum field, in Brisbane, Australia. Her research at PEM will be published and shared with art museums worldwide. 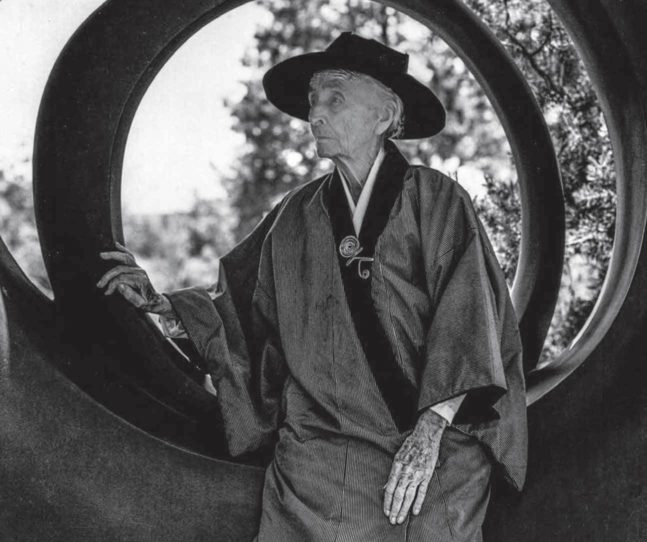 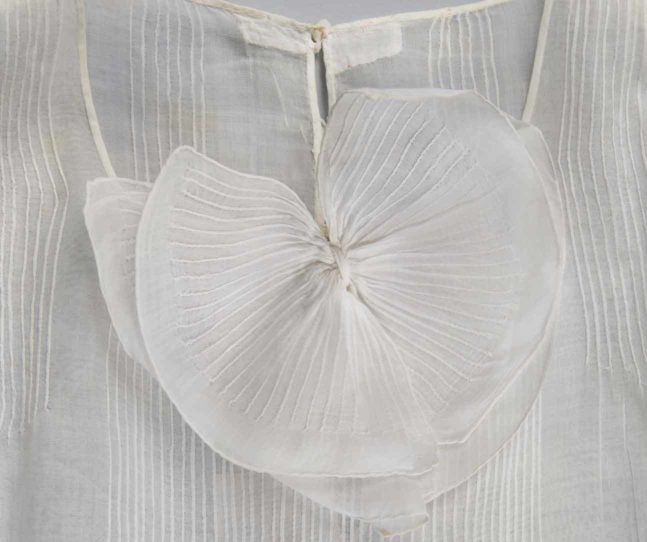